It was during one of these trips when she received the email.

“I was just through the roof with excitement,” Lesleighan says. “I told everybody.”

Telling everybody was calling Jim English, director of the Division of Plant Sciences, followed up by calling her husband and parents to let them know.

For the first time, floral design students from the division had been asked to compete in the Visual Art and Design Showcase. Both of Lesleighan’s students, Katelyn Stoops and Kailey Brooks, had been accepted.

The Visual Art and Design Showcase began in 2016 and provides a platform for University of Missouri undergraduate students to submit projects in either the artistic expression or applied design categories. Sponsored by the Office of Undergraduate Studies, Office of Undergraduate Research, the Honors College, Mizzou Advantage, and the Chancellor’s Distinguished Visitors Program, students compete to win a grand prize of $3,000 in each category and one of four $500 awards per category. 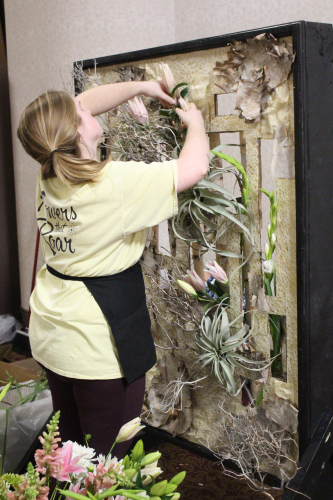 Katelyn Stoops works on her piece, “Soar” before the showcase begins in Jesse Hall. Photo courtesy of Lesleighan Kraft Cravens.

The application process for students begins long before the showcase takes place in Jesse Hall in late January to early February. By mid-November, applicants submit an online application, three to four representative images of the work, a title for the piece, and a 150-200 word artist statement outlining the creative vision and inspiration behind the work.

Floral design stands alone in regard to the lifespan of the artwork. While other students were submitting completed pieces like photographs, documentaries, sculptures and advertising campaigns, floral designers were only able to submit sketches and drafts. Despite their works being unfinished, the vision behind them was complete.

Katelyn Stoops, a senior from Summersville, Missouri, had been finding inspiration since the previous summer while traveling to Anaheim with the Mizzou student chapter of the American Institute of Floral Designers (AIFD).

Every summer the group takes students to the AIFD Symposium to convene with others in the field and compete against the other 11 student chapters from across the nation. It was here, while the Mizzou chapter was finishing second overall as a team and Katelyn was placing second overall (out of 52 students) as an individual, that she was creating a vision for her future project.

“I knew I wanted clean lines and pops of color,” Katelyn says. Her artist statement for her piece, “Soar,” reads, “My inspiration is when you view my floral art with mixed media, you feel as though you are soaring, breaking out of the mold/conforms of life.”

Kailey Brooks says her vision simply popped into her head while doodling one evening.

“I was trying to think of something cool I could do… that no one else would think to do,” the junior from Fulton says. “It was just something I’d never done before with flowers.”

Kailey knew that the decay of flowers over the course of the showcase would be a problem so rather than fight it, she embraced it in her work “Persistence.”

She writes in her artist statement, “Over the course of the showcase, each person will see ‘Persistence’ differently as her body slowly begins to change and deteriorate away while still holding on to hope.” She added, “Not a lot of people get to see these beautiful flowers from start all the way to finish.”

Both designs were representative of the artists’ personal style. Kailey drifted towards a more sculptural approach, while Katelyn’s vision was a “free flowing” floral wall, Lesleighan says.

Lesleighan says her students spent nearly 50 hours on their plans and recalls one evening in particular where she was in the classroom until 10 p.m. watching Kailey and Katelyn place the finishing touches on their sketches.

Following the application, Kailey and Katelyn were left to wait.

Lesleighan had been told that she would receive word of their acceptance or rejection by the day the group was gathered at Baisch and Skinner. However, the students had been told that the information would not be released for another few days. 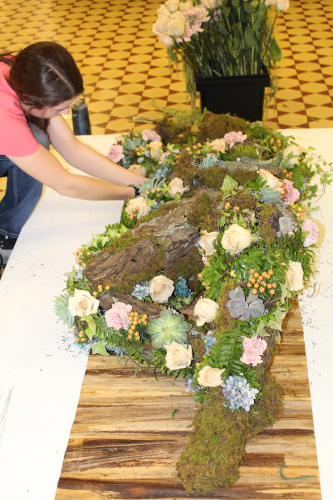 They were startled when their teacher checked her phone and began to congratulate them.

“It was really exciting… getting into something that I actually want to do and show flowers as an art form,” Kailey says.

Katelyn agreed, “I’d put a lot of thought and creativity in my design.” Katelyn says. It wasn’t long though before she was thinking about the next step. “Sometimes it’s hard to imagine it all coming together. After the excitement I think came the real challenge.”

For Katelyn, the next step happened at home in Summersville, Missouri. She enlisted the help of her father and neighbor in building the 125-pound base and frame that stood nearly six feet tall and four feet wide. The week before the showcase, she finished assembling all of the dry materials, like bark, that would not decay before the display began. She did not count on, though, her blooms (flowers) never coming in on the day before she was to set up the display. Without missing a beat, she made a last-minute road trip back to Baisch and Skinner to grab some replacements, and was back on track.

“You have to take it bit-by-bit and learn how to adapt and react to different obstacles that you face,” Katelyn says.

Kailey began her preparation with chicken wire. Her sculpture-like piece of a decaying woman was built by wrapping chicken wire, first around herself for measurement and then to the structure. Using her own body as measurement meant that the subject was a near exact replica of the artist.

The showcase began on Jan. 30 – a Monday – so most students prepared their displays on the previous Saturday. Since the other entrants had submitted completed pieces, their set-up process was under an hour, Lesleighan says. This was not the case for Kailey and Katelyn. To maximize the life of their artwork, they were forced to wait to add the flowers until as late as possible. After four hours in Jesse, they were finished. The work also needed heavy maintenance throughout the week.

“I went back multiple times a day to check on our materials and freshen up water tubes (miniature vases for each stem),” Katelyn says. She would also replace any blooms that were looking particularly droopy and dehydrated.

In between checking up on the flowers, there were showcase events throughout the week. Every day from 8 a.m. until 6 p.m., the hall was open to the public for viewing. On Thursday, each student received four to five minutes with four jurors and discussed the inspiration and execution of their work. Friday, keynote speaker Sarah Leen (BA ’74), director of photography of National Geographic magazine, spoke to contestants before the awards ceremony.

At the end of the night, Kailey’s “Persistence” won a $500 award in the applied design category as well as the people’s choice award.

“There were a lot of other stronger competitors and I was just surprised,” Kailey says.

The significance of even being accepted was not lost on Katelyn.

“The prize is getting selected,” Katelyn says. “Getting to showcase your work is the excitement and joy.” 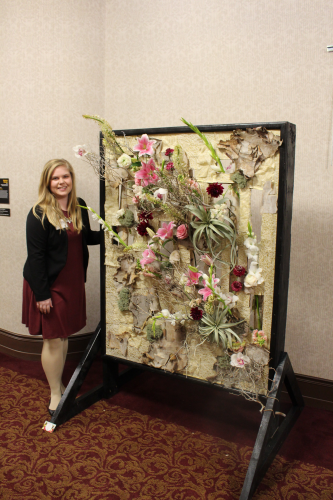 Kailey and Katelyn says that excitement and joy was enhanced by the support from the College of Agriculture, Food and Natural Resources and Division of Plant Sciences faculty and students.

Katelyn’s time in the club, however, is nearing a close. She will graduate in December 2017 with a degree in agribusiness management and a minor in plant sciences. She hopes that what once began as an interest in horticulture/floral design through FFA, will someday bloom into owning her own floral shop. Katelyn also spent last summer as an intern for Tipton and Hurst, a floral company in Little Rock, Arkansas.

Kailey’s interest in plant science also began in FFA. She says she was sold on the subject after attending a plant sciences camp at the university and meeting her future instructor, Lesleighan. In a couple of years, Kailey will have a degree in plant sciences in horticultural science and design. A few more years, and she hopes to be working in wedding and large event floral design while entering her work in art competitions on the side.

Lesleighan  received both of her degrees in agricultural education and leadership. Before becoming a full-time instructor of floral design in the fall of 2015, she was a student worker at Tiger Garden and a founding member of SAIFD.

She remembers the early days of the (still young) 5-year-old club when they competed at AIFD symposium and placed dead-last. The following year they placed second-to-last. This past summer, Mizzou’s chapter placed second overall and the five-person club of Lesleighan’s days has grown to a 20-person group at the average meeting with eight student officers. The floral design program, under the department of horticultural science and design, teaches 300 students per semester across five different courses. 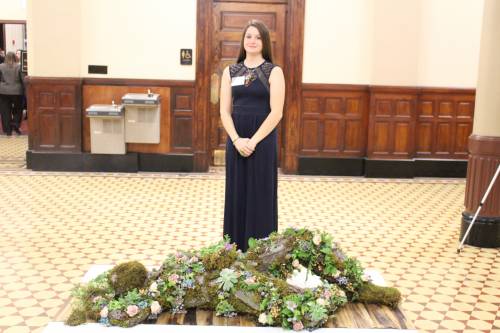 On March 17, SAIFD members participated in Art in Bloom, a floral design competition sponsored by MU Museum of Art and Archaeology, Museum Associates, Inc., Missouri Botanic Garden, MU’s Textile and Apparel Management Department, and Missouri Historic Costume and Textile Collection. At the museum, students competed against professional florists from across mid-Missouri in the challenge of creating floral arrangements based on the artwork found throughout the museum’s galleries.

Chances like this allows students to network and realize their full potential as a group, Lesleighan says.

While this year none of the student teams placed in the contest, they are proving that they can compete.

“I believe that the students do so well when competing because I set them to a higher standard of design… It is all or nothing,” Lesleighan says. “I want to set them up to be able to design at such a high quality that no one questions them.”