When Adolfo Rosati, a research scientist in Italy, received a scholarship from the Fulbright Scholars Program to further his studies in the United States, those who know him had one simple question – with 50 states to choose from why was he going to Missouri?

The answer was quite simple for Rosati. 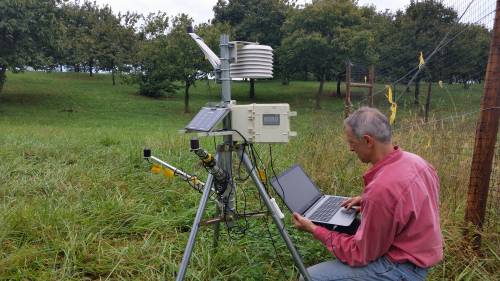 Adolfo sets up his project at the Horticulture and Agroforestry Research Center near New Franklin.

Rosati knew of the MU College of Agriculture, Food and Natural Resources’ Center for Agroforestry through talking with past director Shibu Jose. The two first met a couple years ago at the 3rd World Agroforestry Congress in India. Those meetings increased as Jose was invited to be part of a steering committee to monitor a $6 million European Union agroforestry project, a project Rosati is a part of.

“The Center for Agroforestry is a global leader in temperate agroforestry education, research and outreach,” said Jose, director of the School of Natural Resources and superintendent of the Horticulture and Agroforestry Research Center. “Adolfo is part of a growing number of global scholars who come to MU seeking out the unique research opportunities offered by the Center. Our faculty, staff and students also benefit from both the scientific expertise of the visiting scholars and the cross-cultural experience.”

Rosati, his wife Darcy Gordon, and their two children, Fafa and Ben, have been in Columbia since September and will be in the United States through June. His research is located at HARC, near New Franklin, and is focused on the important role light and shade plays in an agroforestry system.

Rosati received his Ph.D. from the University of Perugia (Italy). As part of his Ph.D. work, he traveled often to the University of California, Davis, to work with researchers stateside. That work was focused on fruit trees. That is where Rosati also met his future wife, Darcy. She was a Ph.D. student at the time. 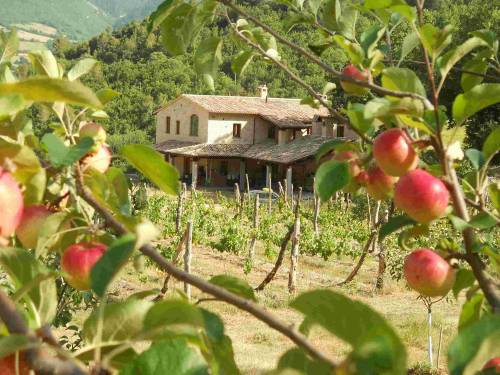 Rosati’s home in Italy. The land had been abandoned for 40 years before Rosati and his wife moved there in 2001.

“I met Darcy during her very first day as a Ph.D. student,” Rosati said. “I was a visiting scientist at that point, working with her professor. We were introduced to each other and the rest is history.”

When Rosati returned to Italy, he began working with vegetable crops. His research was primarily located in southern Italy, and after a few years in vegetable crop research, Rosati wanted to work closer to where he lived – Spoleto – which is in the center of Italy. Spoleto is actually where Rosati grew up, and he was happy to find work closer to home.

“I got tired of being away from home,” he said. “I wanted to be with my family.”

The only branch of the national research council around Spoleto deals with olives, so that’s where Rosati transitioned to next. As Rosati got more and more involved with olives, he was looking for ways to combine his past experiences with his current research.

“When I look at an olive orchard, I like to see not just olive trees, but an agroecosystem, that includes weeds, birds, insects and grass,” he said. “More and more olive management includes green cover, because you want the soil to be protected. You don’t want the soil to be tilled and erode away. You want that organic matter to stay there. If we need a green cover anyway, why couldn’t we sell the green cover and increase the income in the orchard?”

Rosati started growing a wild asparagus species that is traditionally eaten in the area as well as in the Mediterranean. The species is generally grown in the wild.

“I wanted to grow it on purpose and add another income on our olive orchard,” Rosati said. 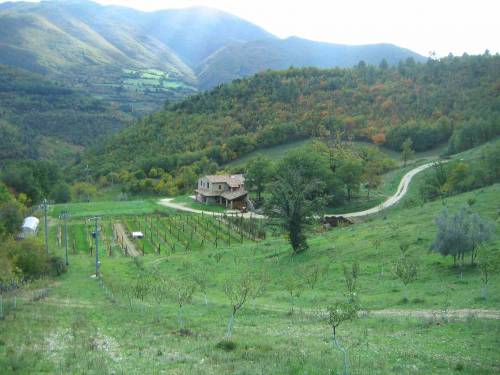 The Rosati family farm has been transformed into their very own research center.

Weeding olives with wild asparagus mixed in is a tricky and demanding job.

“You can’t use a large-scale machine,” Rosati said. “So how can you do it more cheaply? Why not use chickens to weed both the asparagus and the olives? Not only does that job get completed, you can get eggs and/or meat from the chickens.”

Combining olives, wild asparagus and chickens is the definition of an agroforestry system. Rosati had no clue of an ‘official’ title – he just knew the theory made sense from an economic and environmental standpoint.

“I often think of things that make sense to me – and when I go look it up – they often already have a name,” Rosati said.

As Rosati’s research has moved toward agroforestry, he wanted more opportunities to study the practice.

The Fulbright Scholars Program was created in 1946, spearheaded by then-senator J. William Fulbright. Fulbright contributed greatly to international affairs and was the longest-serving chairman of the Senate Foreign Relations Committee.

The program awards around 8,000 grants each year. Students, scholars, teachers and professionals have all benefited from the awards.

“Having served as a Fulbright Scholar in a foreign country, conducting research and being a cultural ambassador of the United States, I understand the value of this program,” Jose said. “So, I was glad to support Adolfo’s application.”

“The aim of the program is to coordinate international partnerships with a focus on scientific research,” Rosati said. “There is also a social aim. I am an ambassador of the Italian culture. While I’m conducting research, I am also trying to be socially active.” 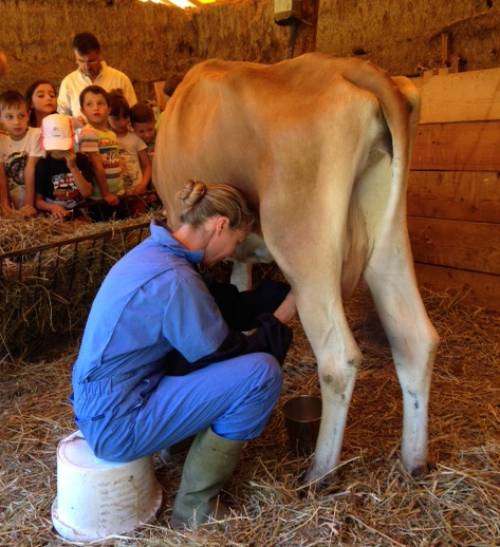 Darcy entertains an audience while she milks the family’s cow. The Rosati family hosts several groups and students at their farm.

Rosati’s research was very active in the fall. He had 24 sensors in different positions under four trees, which is representative of an orchard. The sensors react to light by giving a voltage output. A data logger records those outputs, which are then converted to light through a conversion factor.

“I placed my sensors in precise locations,” Rosati said. “Those sensors measure light data every minute. I do this for several days, moving the sensors to several different locations. In the end, I have billions of data points.”

Rosati is also working with a gamagrass variety called “bumpers” that has been evaluated at HARC for its shade tolerance. Rosati has studied this variety, looking at photosynthetic measurements, light response and leaf morphology.

When plants have a high photosynthetic ability, they need to keep an active metabolism which means they respire more. When plants move to the shade, they don’t perform as well because of the lack of light. Having the ability to lower respiration is essential if the plant is in the shade often, because a lower respiration rate allows the plant to keep positive net photosynthesis at lower light. Rosati found that this gamagrass variety does in fact do well in the shade, and this is precisely due to its lower respiration when the plant is adapted to low light conditions, as is the case in agroforestry systems.

Rosati has collaborated with the University of Illinois at Urbana-Champaign as well, comparing the data he has collected against model data.

“We’re using this to explore scientific thinking in terms of shade and trees in general,” Rosati said. “Models give you an average of light if you can’t be there to collect it physically. We wanted to see if you get the same results from measuring versus modeling. Does modeled data yield similar estimations of plant performance (photosynthesis) when used in place of real, measured light data?”

Rosati’s research will pick up shortly, as the leaves start budding. He can’t study shade when the trees have no leaves.

Rosati and his wife have been on their family farm in Spoleto since 2001. The farm had been abandoned for 40 years before the Rosati family looked to renovate it. Darcy works full-time on the farm. 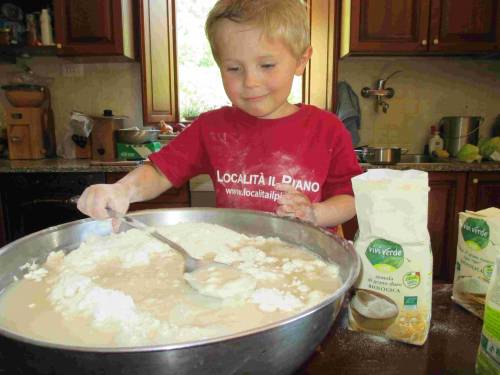 “Since we are both scientists, our farm is more of an experimental farm than a commercial farm,” Rosati said. “We have a few things that make money and a lot that lose money. It’s just a large hobby, really.

“Like children with cars, we collect trees and species of things that are edible. If we go to an orchard and see something we don’t have, we try to plant it and see how it does. We have 1,400 varieties of trees and edible plants of every kind, including 450 varieties of apples, 80 varieties of figs and so on. We grow soft berries and small fruits and have an herb garden. We also have sheep, goats, chickens, ducks and a cow.”

Neither Rosati nor his wife grew up on farms, and they have worked hard to transform the property into a research center.

“I find it very lucky that I can be both a scientist and a farmer,” Rosati said. “It gives me an entire perspective.”

They have apartments for individuals to rent and take in the entire experience. They are also looking to work with student exchange programs, where students can come to their farm and learn about agriculture in another country.

“Guests can watch milking in the morning, mozzarella making in the afternoon and eat that mozzarella on pizza that evening,” Rosati said. “Agrotourism is a big part of what we do.” 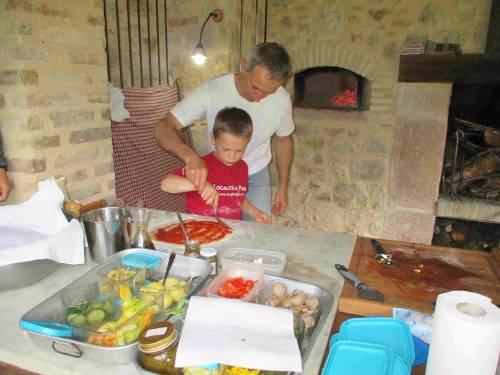 Ben and Adolfo put sauce on a pizza made from ingredients from the Rosati family farm.

Their property includes several forests, which can lead to a few headaches.

“It’s beautiful but wild pigs can ravage your crops and deer can kill your trees,” Rosati said. “Rabbits can do a lot of damage. Chickens can seem to be great grazing outdoors, but they can pick up parasites from wild fauna.

“Farming following nature’s ways, as we do, is a nice vision of agriculture, but it needs a lot of knowledge and experience – just like we have developed for industrial agriculture. Currently, both farmers and scientists are quite behind on this knowledge, as it has not been the target of most modern research programs. That’s why, on our farm, we play with everything.”

Fafa and Ben also help around the family farm. Rosati said the trip to Missouri has been a nice break for the two.

“They love it here – mainly because we’re free on the weekends instead of working on the farm,” Rosati said. “We have done more family stuff than ever before.”