It is a crisp Sunday morning. A sweet, smoky smell and the sound of children playing fill the woods.

Beaver likes the quiet of the woods where he taps maple trees for syrup. Equally, he likes the sound of his sons playing with their tractors or the laughter of friends enjoying ATV rides and barbecue while he tends the syrup.

After serving two tours of duty in Iraq, he wraps his family in the comfort and safety of rural life. The only conflict this morning is the good-natured one between his sons, who are having a tractor pull. 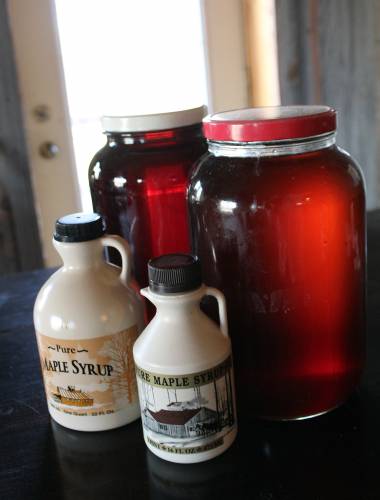 Big Beaver maple syrup is made in Missouri.

Beaver and his family operate Big Beaver Maple Syrup on 40 acres of woods near Mark Twain Lake in Ralls County. It is the second year they have tapped some of the 200 maple trees around their house and sold amber deliciousness in a bottle.

Beaver is one of more than 300,000 post-9/11 veterans expected to return to Missouri in the next decade, says University of Missouri Extension’s Karen Funkenbusch. More than 44 percent of military recruits come from rural communities, according to U.S. Census data. Many of them will return to their rural roots, beginning or resuming careers in agriculture. Funkenbusch heads a 2501 USDA grant to help beginning farmers, veterans and others evaluate and plan their farm enterprises.

Inspired by 9/11, Beaver enlisted in the Marines right after high school and served in Iraq as a combat engineer. His unit sought out enemy weapons caches.

One of Beaver’s fellow Marines introduced Beaver to his sister, Chandra. They married and lived in New York before moving to Beaver’s hometown of Monroe City. He now works in construction for the Missouri Department of Transportation. Chandra is a nutrition program associate for MU Extension in Monroe County.

Their daytime jobs allow them to enjoy rural life and activities such as making maple syrup.

Making maple syrup is common in Chandra’s home state of New York, the second-largest producer of maple syrup in the U.S. It is less common and less commercial in Missouri.

Chandra and Jeremy were eager to add value to their small acreage by selling maple syrup. They also like having local food sources, such as beef, chicken, eggs and garden produce.

The Beavers tapped 60 trees in 2016. They hope to tap 100 this year. They tap trees before budding, usually in February.

They tap trees by drilling a hole at an upward angle. The spile (a spigot) fits into the hole, about 2 to 2 1/2 inches deep. A bucket is hung to collect the sap. They haul buckets of sap in a small wagon attached to an ATV to the sugar shack.

The sap drains from a gravity flow tank into a warming tank. The warmed sap then slowly drips into the evaporator to cook on a wood stove. The process is long and slow. It takes about 40 gallons of sap to make one gallon of maple syrup.

They check buckets often to avoid overflow. Because Jeremy and Chandra have full-time jobs, they tap and cook on weekends, often into the wee hours of morning.

They put syrup in double-sealed bottles and tag them with the “Big Beaver” business card. The name is taken from Chandra’s maiden name, Bigelow, and the Beaver family name. They sell through word of mouth to weekenders at Mark Twain Lake and in small area retail outlets.

The Beavers are learning to establish and market their product through MU Extension’s Business Development Program.

Making maple syrup is a family affair for the Beavers. The boys are competitive about who can help their father the most. Recently, Jeremy awoke before daylight to find his 8-year-old outside with the dogs and his coon-hunting light checking the sap buckets. He wanted to get a head start on his younger brother.

Jeremy says the startup expenses in agriculture are challenges for him and other returning veterans. He owned cattle when he was growing up on the farm, but sold them when he went into the Marines. Now, he’s starting over and finds it more expensive.

He now has three Herefords and one Simmental and Simm Angus steer. The oldest son will show the steers as his first 4-H project. He will be the third generation of Beavers to show cattle with MU Extension Stone 4-H Club of Marion County.

Funkenbusch says Jeremy’s story of wanting to return to rural roots is one she often hears from post-9/11 veterans. She also hears it from veterans who have never farmed before. They seek the benefits of rural life after serving in Iraq and Afghanistan.