On the last day of work at the hospital, Chininis and his… Expand ▸

Jeff Chininis, a bioengineering student in the Division of Food Systems and Bioengineering, says the profession runs in the family. Growing up with two uncles and a grandfather in the field of engineering, he had suspected that he would follow in their footsteps. Upon arriving at the University of Missouri and taking introduction to engineering, Chininis drifted toward bioengineering.

“Doing something towards medicine would be a chance to help people and something really fulfilling,” says Chininis, a senior from Kansas City. “That was the one I chose and I haven’t looked back.” 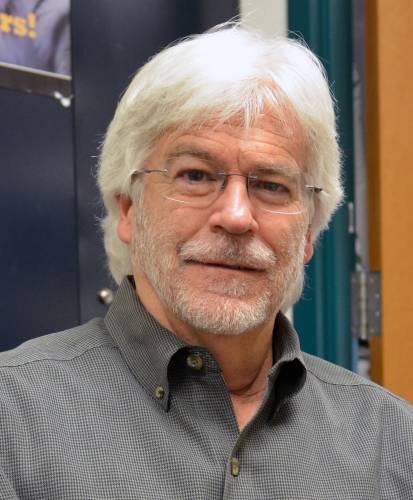 Shortly after, Chininis found himself in a course devoted to professional development in bioengineering. This class, taught by Steven Borgelt, director of undergraduate studies in bioengineering and associate professor of agricultural systems management, exposes students to different outlets to pursue a career in bioengineering.

Here, Chininis began what would eventually become a yearlong trek from the classroom to a hospital in Rwanda — and ultimately back to the class where the journey began.

‘Where I never envisioned’

Borgelt has taught the professional development course each spring since 2002, when he took over and revised the class into what it is today. The class is split into three major sections: career planning and professional job search; out-of-the-classroom learning experiences (undergraduate research, internship opportunities, and post-graduation opportunities); and professionalism, ethics and contemporary issues.

“It was a really great class just to be exposed to opportunities,” Chininis says. “It’s definitely the kind of class that what you put in is what you get out.”

Founded in 2001, EWH has sought to serve three primary interests. Closest to home, EWH engages with future engineers via university chapters and design competitions set to improve global health. The organization also works with local partners in third-world countries to create sustainable training programs for biomedical engineering technicians. Most importantly to Chininis, EWH provides student the opportunity to travel abroad and gain experience in the bioengineering field within a hospital setting. 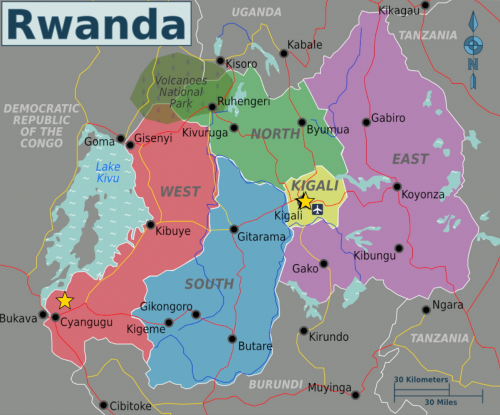 The summer institute is a partnership between Duke University and Texas A&M University and offers students four locations to serve: Tanzania, Nicaragua, Rwanda and Nepal. It was the Rwanda program that caught Chininis’ attention.

Chininis says this program meshed well with the type of opportunity he was looking for: the chance to travel to an unusual destination and gain relevant experiences.

“It wasn’t like I targeted Africa,” Chininis says. “I remember telling my parents, ‘I want to go somewhere where I never envisioned myself going.’”

The cost of the Rwanda program — $7,000, not including airfare — was his first obstacle. He ended up getting half of the funds covered through financial aid offered by EWH.

The Office of Service-Learning was also able to refer him to a possible award, the Dr. Pepper SEC Education Abroad Award. This scholarship is awarded to two students at each of the 14 SEC Universities seeking to further their education in a non-traditional study abroad program. Chininis was required to write an essay outlining his trip and itinerary. As a result, the remainder of his trip was fully funded. 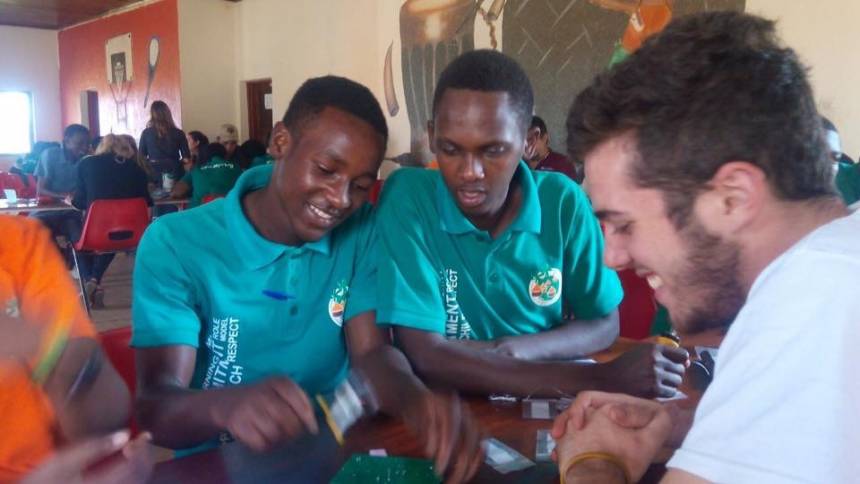 Beginning June 1, 2016, Chininis and 24 other students from around the country were stationed at Integrated Polytechnic Regional Center in Kigali, Rwanda. They were joined by Gerard Coté, director of the Center for Remote Health Technologies and Systems and a professor of biomedical engineering at Texas A&M University; and Michael Moreno, assistant professor of mechanical engineering at Texas A&M University.

Living on campus, the group was situated in what Chininis calls a “middle developed” part of the country. For one month, the students were in class from 8 a.m. to 5 p.m. They studied language (both French and Kinyarwanda, the local language), spent time in lab, and earned course credit in a class titled “Instrumentation in the Third World.” 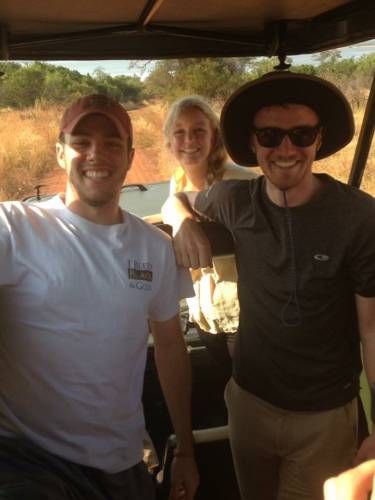 All of this was in preparation for month two of the internship where interns were paired off and stationed at hospitals around the country. Chininis and Joshua Shubert, a Ph.D. student at Johns Hopkins University, were assigned to Gihundwe District Hospital in Kamembe, Rwanda. Located, close to Lake Kivu, an East African great lake, Chininis says he couldn’t complain about the weather or the view.

During the weekends, when students had down-time, Chininis said they would use their issued “brick phones” and the local bus system to travel to each other’s new homes. During his travels, he visited a volcano, hot springs, and took a safari. While in Kamembe, Chininis showed his colleagues the views his lake offered.

During working hours, Chininis and Shubert worked under the two engineering technicians for the hospital.

“The main thing was fixing equipment,” Chininis says. “If equipment stops working in the middle of a surgery, there’s basically two guys to fix it.”

Interns worked in assisting with equipment maintenance at the hospital and occasionally at one of the seven partner health clinics. Chininis says that these situations were often high intensity and performed with a strong sense of urgency. Certain circumstances warranted MacGyver-like improvisation such as when a truck battery was used to power a backup generator for a hospital.

Chininis recalls another occasion when a doctor brought him a saw that was about the size of a flashlight. One hour in, while trying to get it to function, he told the doctor that he didn’t need to wait on him since there was at least another hour’s worth of work. 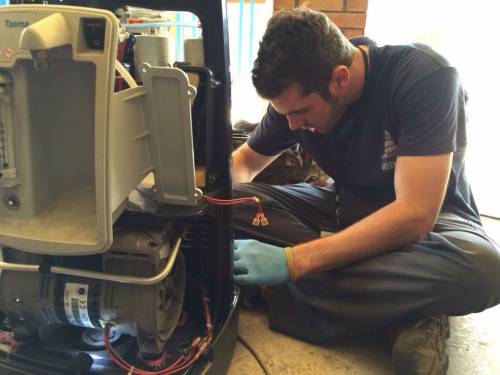 When the doctor said, “Patient waiting. Bad accident,” Chininis pressed to find out that there was a patient waiting for a mold for a prosthetic leg. The tool he was working on was vital for its creation.

Chininis says that conditions like this fueled the collective desire of both Shubert and him to be as accurate and precise as possible.

“He and I would get big eyes and just try to keep calm,” Chininis says. “You just open it up, see what you can do, and do your best.”

“You definitely felt good… knowing you’re helping somebody. And that was the original goal of bioengineering,” Chininis said. “That’s a cool thing to be a part of.”

High-pressure didn’t keep them from enjoying their stay. Chininis says that he and Shubert were able to grow close to the engineering technicians that they worked under. He recalls of them, Xavier, who was very interested in American pop culture, blaring Michael Jackson and dancing during work. They also spent time in their coworkers’ homes, joining their families for dinner.

“It was a special place,” Chininis says. “If there was ever an opportunity, I would love to go back.” 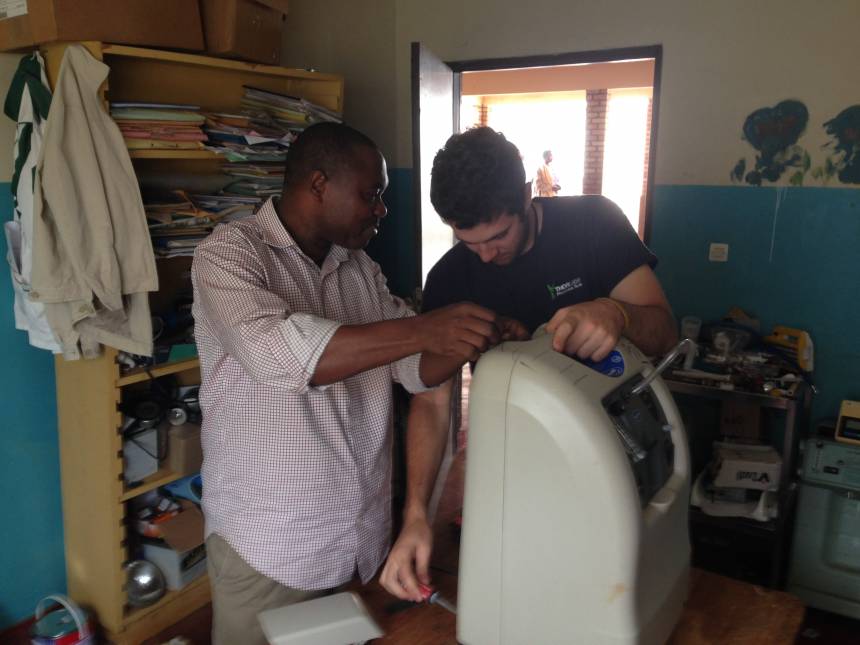 Chininis’ experiences proved to be special enough to warrant a guest speaking appearance with two other students on a panel in Borgelt’s professional development course on Feb. 27.

“I want to make sure students learn about this experience,” Borgelt says. “We have some students that go abroad, but not very many that do developmental work.”

While many students take advantage of using an internship to gain course credit, Borgelt wanted to highlight the humanitarian efforts of the summer institute in which Chininis participated. 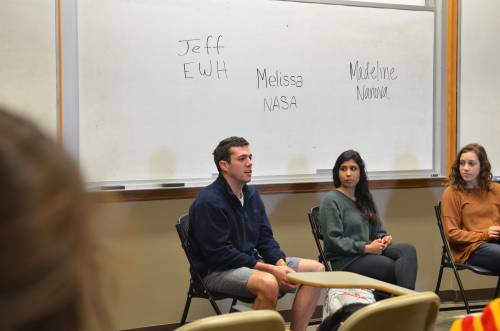 The additional two bioengineering students who spoke with Chininis on Feb. 27 in Eckles Hall were Melissa Lokugamage and Madeline Simon, who interned with the National Aeronautics and Space Administration (NASA) and Nanova Biomaterials, respectively.

Simon, a junior, worked in the orthopedic and surgical division for Nanova doing mechanical testing and manufacturing.

Lokugamage, a senior, spent her summer working for NASA at the Ames Research Center in Moffett Field, California. While there, she worked on research and testing for BioSentinel, a space radiation detection device.

In addition to sharing about their experiences, the panel also talked to the class about earning credit through internships and their involvement in undergraduate research.

Borgelt says that he hopes that panels like these, and the class in general, exposes students to a wide variety of opportunities to gain experience and become career ready. 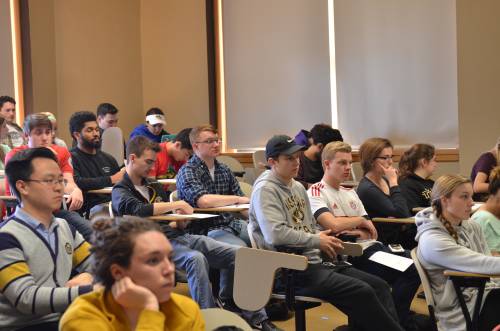 Students of the professional development course listen and interact with the panelists. Photo by Max Goldner.

Additionally, the panel helped students realize exactly what an internship for credit entails.

“Some of his speakers were really important to help guide me and I wanted to do the same,” Chininis said of Borgelt’s class. Before giving his talk, he said that he hoped his message would be the following: “Get experience. Go out and figure out what you can do because college is short.”

‘Be the problem solver’ 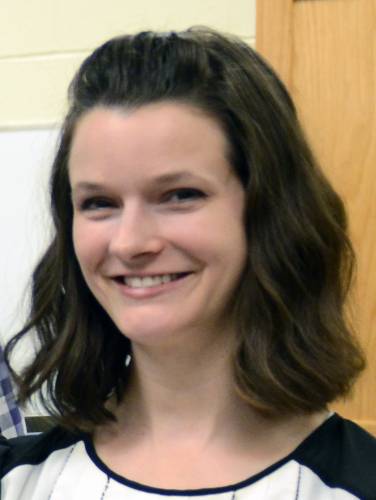 During Chininis’ time at MU, he has also participated in the Missouri chapter of the Engineering World Health and Engineers Without Borders. He is a member of Beta Theta Pi Fraternity and has also served as an ambassador for the College of Engineering, giving tours of the college and serving as a representative at university events.

Chininis has also been involved in undergraduate research since April of 2014 in the laboratory of Assistant Professor of Bioengineering Heather K. Hunt. Hunt’s Biophotonics and Biomaterials Laboratory explores how light interacts with unique material systems, to create advanced materials and devices for optics, electronics, biomedical, and environmental applications.

In reference to Chininis’ time in her lab, Hunt says “He’s very dedicated. When he is approached with a problem he really takes his time to figure out what is going on with that problem and to talk to people and to work through it from different angles.” She adds: “He is a genuinely kind person and he genuinely cares about people.”

As Chininis prepares to graduate in May, he is considering his possible paths. While he has been accepted into the master’s biomedical engineering program at Washington University in St. Louis, he has also applied to and is interviewing with various bioengineering companies.

Regardless of where his future leads, Chininis hopes that he can continue working to advance the lives of others.

“When you talk about medicine and all the new technologies in medicine –  I want to be a part of something like that,” he says. “I don’t think I have one specific thing I’m trying to solve in the medical world, but just any type of problem that you can use engineering and be the problem solver to hopefully improve someone’s life.”