Gabriel Abdulai stands next to the latest thresher he has… Expand ▸

Almost everyone probably has heard of this proverb at some point in their lives, but Gabriel Abdulai has made an amendment to the saying: “Teach me how to own the pond, so that I never go around looking for a pond to fish at, because if I own the pond, I know the time to fish and I can determine the kind of fish to grow inside.”

Abdulai, a native of Ghana, is a first-year master’s student in bioengineering in the Division of Food Systems and Bioengineering. The proverbial pond he talks about can be found in his homeland of Africa – and its ownership, Gabriel hopes, comes from fostering a sense of self-empowerment and entrepreneurship among his fellow Africans that mirrors his own. 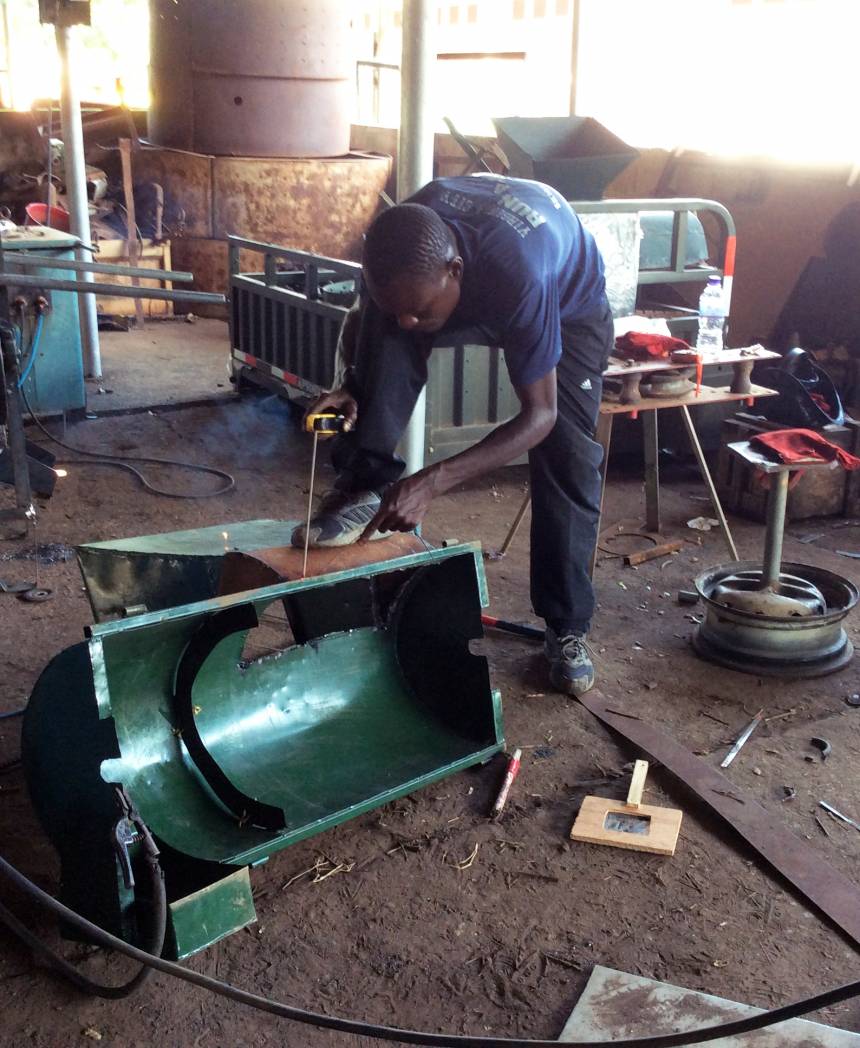 A blacksmith works on assembling a part of a thresher in Tamale, Ghana, in August 2016. Photo courtesy of Kerry Clark.

Last August, before Gabriel made his first trip to the United States to begin his studies at the University of Missouri, he worked with local blacksmiths for two weeks at the Savanna Agricultural Research Institute (SARI) near Tamale, Ghana, to help build mechanized threshers.

These machines – two powered by gasoline motors, one powered through bicycle pedals – were made specifically for small-scale farmers to allow to them to expedite the process of separating the chaff and straw from crops – in this case, mainly soybeans – thanks to the continuing efforts of the U.S. Agency for International Development’s Feed the Future Soybean Innovation Lab (SIL). The lab is an initiative taking place in 11 African countries focused on supporting soybean production and improving farmer yields by using high-quality seed and inputs, extension information and appropriate-scale mechanization. MU has researchers doing work as part of the SIL team in Ghana, Mozambique, Ethiopia, Rwanda, Zambia and Malawi.

In a part of the world where most of the threshing is done manually by smashing the soybeans and other crops with heavy sticks, threshers like the one Gabriel helped create could save farmers an immeasurable amount of time and effort.

At the same time, if the blacksmiths are knowledgeable about how the threshers are built and maintained they can create a value chain that has not existed with the few threshers in Ghana and other parts of Africa that are imported and meant for large-scale farming production.

“The idea of the thresher is to empower local economies. That’s very important because there’s a lot of joblessness in Africa and other parts of the world,” says Gabriel, whose father at one point worked as an agricultural extension agent in Ghana.

‘It did not kill my dream’

Gabriel was born in the town of Bawku in the far northeast corner of Ghana, but would move to Tamale, about 155 miles southeast, when he was 8 years old. The middle child of three, Gabriel grew up with a desire to draw sketches of all sorts of objects – and to tinker with anything he could get his hands on. He recalls trying to repair his family’s TV or radio when they would malfunction, or even try to get extra stations on both devices.

He also spent time working on his family’s small plot of land, helping to create ridges in the hilly ground, as well as plant and harvest crops. At first his family grew rice, before switching to corn and most recently to soybeans. 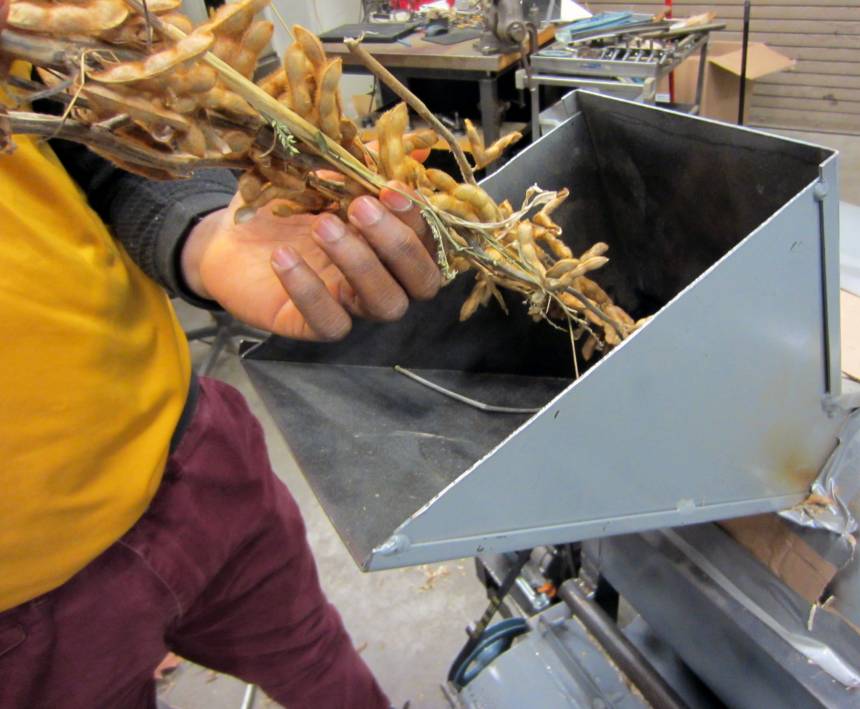 Gabriel Abdulai demonstrates how soybeans are fed into the thresher he has designed. Photo by Stephen Schmidt.

“I said, ‘No, I never have.’ He said if I’ve never seen one, I shouldn’t think about being an engineer. It was not encouraging to me, but it did not kill my dream,” Gabriel says.

He would go on to study agricultural engineering at Kwame Nkrumah University of Science and Technology, finishing with his degree in 2012. Following graduation from a four-year school in Ghana, there is a mandate that graduates spend a year serving their country in a role related to their major. Gabriel ended up going to work at SARI.

Following his year of service, Gabriel accepted a permanent job as a senior workshop superintendent at SARI. One day in March 2014, he was told by his boss there was an American stopping by to assemble and distribute soybean success kits as part of the main SIL initiative – and that he should assemble a team from SARI to help her. 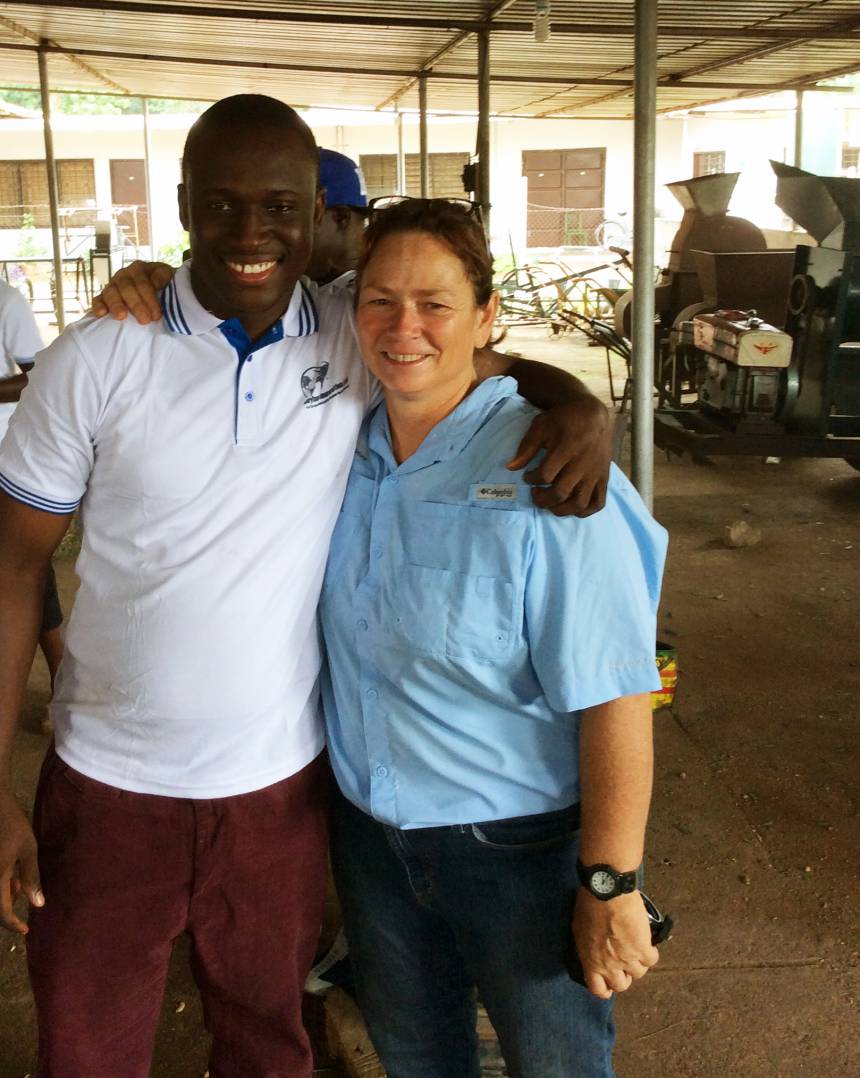 The American was Kerry Clark, a research associate in the Division of Applied Social Sciences who is a part of the MU team involved with SIL. Impressed with his work ethic, Kerry made a point of talking with Gabriel, who would later share with her three research papers he had written on his own. One of them involved a self-financed water quality study in nearby villages.

Using SARI’s water research institute, he tested for e-coli levels in surface water that the public had been using in spite the harmful effects caused by chemical runoff from fertilizers and the common practice of open defecation. He found the levels were significantly higher than what is deemed as safe by the World Health Organization.

Gabriel previously had only shown the papers to two other people. The meticulously researched documents all required dozens of hours of Internet access, a service available only at an Internet café with a per-hour access fee, in his part of Ghana.

“I can’t say I have ever seen this kind of personal initiative in a U.S. student or employee,” Kerry says.

When she returned to Ghana a year later, Kerry saw Gabriel again and asked if he had ever thought about pursuing a master’s degree. The idea had come to him, but the source for funding it had not. That’s when Kerry told him about an opportunity for a graduate assistantship through a grant sponsored by the USDA’s National Institute of Food and Agriculture related to controlling weeds in organic no-till farming. 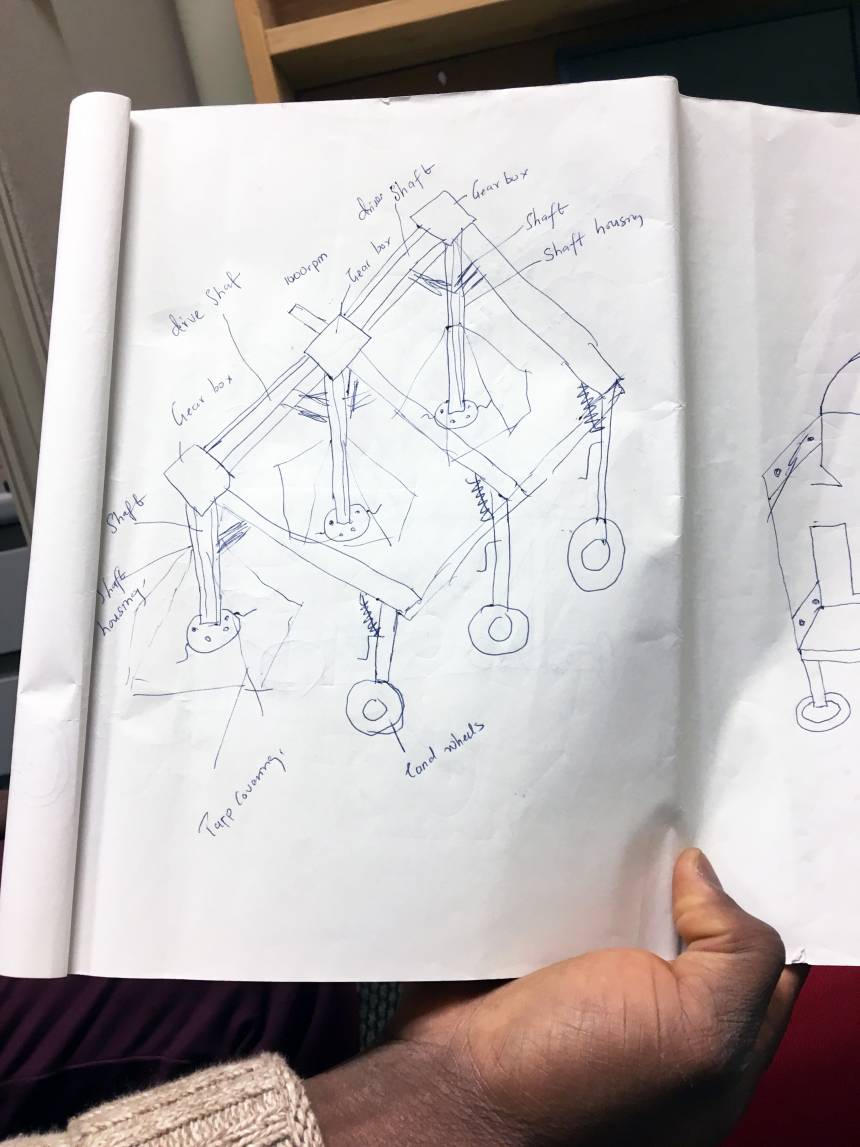 Gabriel Abdulai shows off the sketch for the between-row mower he will begin to build in the upcoming months. Photo by Stephen Schmidt.

As luck would have it, Kerry needed help to build a between-row mower for a tractor, to mow over any weeds that come up through a crimped cover crop. At the moment, that mower is currently one of many sketches in his numerous sketch pads.

During her travels, Kerry has encountered many young people interested in improving their lives by studying in the U.S.

“The difference with Gabriel was that he had showed that he had the capacity to do independent research and a strong drive because he was doing research on his own without funding,” she says.

‘It starts with me’

On Tuesdays and Thursdays, Gabriel spends most of his time in a shop room at the Agricultural Engineering Building, working out the kinks of his thresher that were encountered by farmers – often with the help of senior research associates Gordon Ellison and Cliff Mongler. He plans to conduct work in the near future at the Bradford Research Center with the help of the staff there as well. When Kerry left for Ghana in late February for a two-week trip, she brought with her a manual for the new and improved threshers to share with the local blacksmiths of Tamale and beyond.

Gabriel can also be found often at China Garden, a Chinese buffet restaurant that has become his favorite place to eat in Columbia.

“They have foods that are very common to me,” he says, referring in particular to rice, noodles and the meat offerings.

Now six months into his time at Mizzou, one of Gabriel’s biggest takeaways from his experience has been the relationships that students and faculty have without the rigidity that can be found in Africa and other countries. He mentions how he can easily walk into the office of his advisor, Leon Schumacher, whenever he has an idea that he wants to share.

“I can just sit there and wait for him if he’s having a meeting,” Gabriel says. “And we just talk. I’m not afraid to express myself. In Ghana, it’s different.” 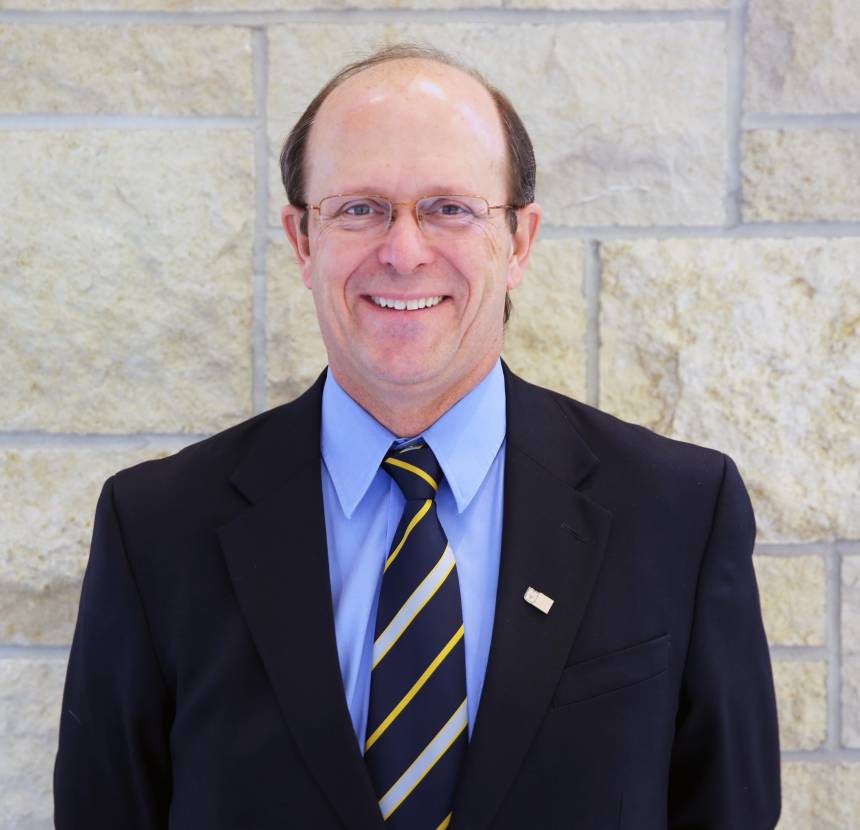 Leon, who is the chair of the agricultural systems management program, describes Gabriel as “gregarious” and “outgoing.”

“I think the single biggest thing is that his fellow students immediately recognized his talents and they accepted him. That’s a pretty strong statement,” Leon says. “Here’s an individual who’s from an entirely different part of the world who has an entirely different set of constructs, yet he will step into a classroom situation and he will add to any discussion. He’s not the guy who hangs off to the side and just kind of listens.”

Following an event on Nov. 2 to honor the 100th anniversary of the division’s agricultural engineering origins, Gabriel took the time to write out an essay tying the history of the practice to the current issues in Africa.

After finishing his master’s degree in either 2018 or 2019, Gabriel’s next hope is to pursue his doctorate degree, so that he could one day become a professor of engineering with an emphasis in agricultural machinery development for small-scale farmers. He also wants to get a consulting company related to cost-effective machinery, called Mech4africa, off the ground. He registered the business in Ghana before he left for MU.

“Young people like him are what Africa needs to get ahead because they have so many things going against them,” Kerry says. “And so meeting somebody who is young and entrepreneurial and who has ideas and just needs a little bit of help to put those ideas in place, if we can help those people, I think we can really make changes in Africa.”

“I think about Africa,” Gabriel says. “I think that if Africa develops, it starts with me.”

“At the Start: Bioengineering, Agricultural Systems Management to celebrate roots in agricultural engineering” (published on Feb. 7, 2017)