For a guy who doesn’t like pancakes, Dave Davis generally has quite a stockpile of maple syrup at his house during the early part of each year.

Davis, superintendent of the University of Missouri College of Agriculture, Food and Natural Resources’ Forage Systems Research Center, has been collecting sap and boiling his own maple syrup for nearly 25 years – beginning the tradition when he and his wife, Julie, lived in Wisconsin. Davis and his wife continued the ritual when they moved to Missouri, with Davis even building the evaporator pan and stove to boil the sap.

“When we were living in northern Wisconsin, and when you have a long winter, you’re always looking for things to do,” Davis said. “We had some neighbors who were really into it. We saw how they did things and one thing led to another.

“My wife really wanted to do it. It was soon added to my ‘honey-do’ list. At first, I viewed it just as one more thing to do. But we’ve had a lot of fun over the years.” 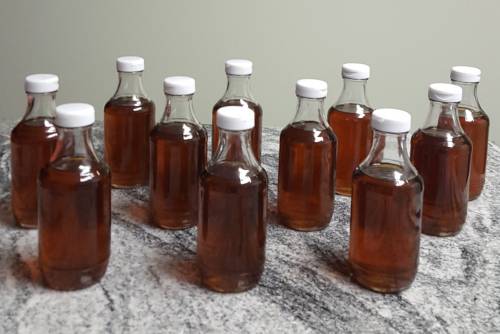 Davis received his master’s and Ph.D. in agronomy from Mizzou in 1988 and 1993, respectively. He worked in Wisconsin after receiving his Ph.D., before joining CAFNR in 2001.

While in Wisconsin, Davis and his wife would tap the numerous sugar maple trees on their property. They made it a family event, as their kids would roast marshmallows or hot dogs in the stove.

“We started out trying just a couple trees with a couple taps,” Davis said. “We learned in a hurry that if you’re going to do it, go all out. We did enough where we had all of the syrup we needed, plus we gave some to family and friends.”

When Davis and his family made the trip back to Missouri for his new job with FSRC, located near Linneus (northwest of Columbia), he connected with a friend, who has a farm near Kingdom City, (east of Columbia).

His friend was interested in tapping maple trees and collecting his own sap. Davis had plenty of experience – and even had his own self-made pan.

“He had the farm and I had the pan,” Davis said.

The duo began a tradition that has continued to this day.

“We made an event out of it,” Davis said. “We go out there and have a fun weekend. We’ll do some farm work as well.”

This year was the first that Davis hasn’t boiled sap at the Kingdom City location. He did tap several trees on his own property, though.

The ideal sap-flow weather includes freezing temperatures at night (upper 20s) and thawing during the day (upper 30s and lowers 40s). The warmer winter this year slowed the flow.

“This year, the sap run was so early and short that we didn’t get together with our friends to boil sap,” Davis said. “I was glad Julie and I put a few taps out when we did at home, otherwise we would have missed the sap run.”

Davis had several sugar maple trees on his property in Wisconsin. He doesn’t have sugar maples at his farm near Brookfield, but he does have several silver maples.

“We were able to produce a couple gallons of syrup this year,” Davis said. 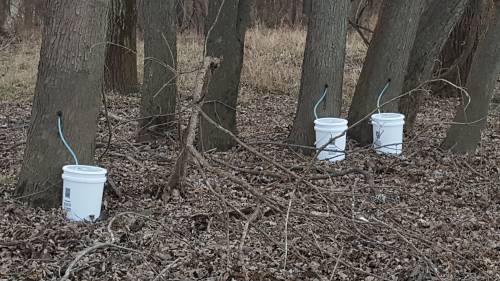 There is an approximate 40-to-1 ratio for turning sap into syrup. Forty gallons of sap equals one gallon of maple syrup.

Davis said he has noticed some differences between the maple syrup season in Wisconsin and Missouri.

“The climate was much cooler,” he said. “We had snow banks in Wisconsin. We would store collected sap in plastic garbage cans and shovel snow over them to keep the sap cold. You were good to go for a week by doing that. We would accumulate a bunch of sap and boil on the weekends.

“The sap run also tended to be longer in Wisconsin. We had more freeze/thaw cycles. The run was usually later in the year as well. It’s a lot earlier in Missouri. Yield-wise, it’s hard to say which was better or worse. Every tree – no matter where they are – is different.”

Davis added that the extra maple syrup is given to friends and family.

“It’s a tradition now,” he said. “It’s not like I need the syrup. Heck, I don’t even like pancakes. I’ll use it on French toast, but there’s only so much of that you can eat in a lifetime.”