This is part two of a two-part story exploring the process of collecting sap and turning it into maple syrup at the Baskett Wildlife Research and Education Center near Ashland. Part one can be found by clicking here.

Once the taps are set in the sugar maple trees, the sap flow is in Mother Nature’s hands. While the maple syrup season generally lasts from January to March in Missouri, the weather dictates how much sap actually flows.

The University of Missouri College of Agriculture, Food and Natural Resources’ Baskett Wildlife Research and Education Center, near Ashland, ended up with around 200 sap gallons this syrup season, which was collected in two batches. The warm winter weather kept the sap from really flowing well. Perfect flow weather occurs when the weather is freezing at night (upper 20s) and thawing during the day (upper 30s and lowers 40s).

“It seemed like an abnormal year,” said Ben Knapp, superintendent of the Baskett Research Center. “Last year was kind of abnormal as well. I don’t feel like we’ve had great maple syrup weather the last few winters.”

Knapp began tapping maple trees at Baskett in 2012 when he joined MU as an assistant professor of silviculture. He’s been the superintendent at Baskett for more than a year while continuing his work as a professor. 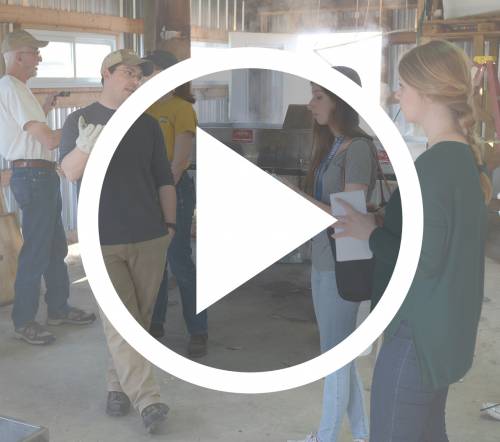 Knapp said when the weather is perfect – and you have a good tree that is really flowing – three gallons of sap a day isn’t out of the question. Baskett had around 150 trees tapped and collected 200 gallons of sap, showing how the warm weather affected the flow.

“The weather definitely slowed down the production,” Knapp said. “We still were able to get some syrup, though, and had fun doing it.”

The 200 sap gallons that Knapp collected equaled around four gallons of maple syrup. There is usually an approximate 40-to-1 ratio for turning sap into syrup, although sugar content can vary in sap from around 1 to 5 percent.

The collecting of sap is a time-consuming project. Knapp and the forestry student took a UTV with a trailer attached to it to the maple trees to collect the sap. The trailer carried a tank that holds 150 gallons of sap.

“We drive out to the sugar bush and empty each container into the tank,” Knapp said. “We do pour the sap through filters first to catch the debris that can find its way into the sap.” 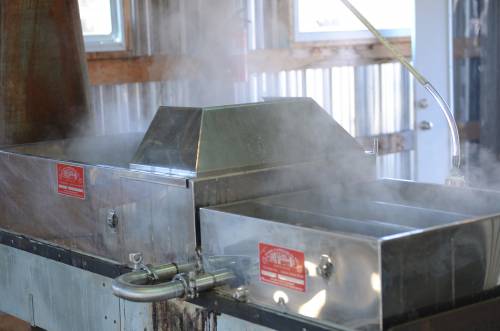 This larger evaporator can hold around 30 or 40 gallons of sap and allows for a quicker boil because of its size.

Knapp used two types of containers to collect sap this year – a traditional five-gallon bucket and Sap Saks. This was the first year that Knapp used the saks. The group used about 25 throughout the sugar bush.

“I really liked the saks,” Knapp said. “They were really easy to use, and they kept out some of the debris, like leaves and small tree limbs. We’ll definitely continue to use those in the future.”

Once they collected the sap, they took it back to the Baskett Research Center headquarters.

“The next step really depends on our schedule,” Knapp said. “We have a pump that pumps the sap from our tank on the UTV into a larger tank. The larger tank holds 200 gallons, so we are able to store the sap in there if we don’t have time to boil right away.

“You can store the sap that way for a few days, depending on the weather. You need to have 80 or more gallons of sap to do a boil.”

Since Knapp collected more than 80 gallons during each trip, he had two boiling sessions. Baskett has a wood-fed evaporator to boil the sap. The evaporator was installed in 2012, as part of a grant that Rich Guyette, professor emeritus in the School of Natural Resources, received. The evaporator holds around 30 or 40 gallons of sap and allows for a quicker boil because of its size. 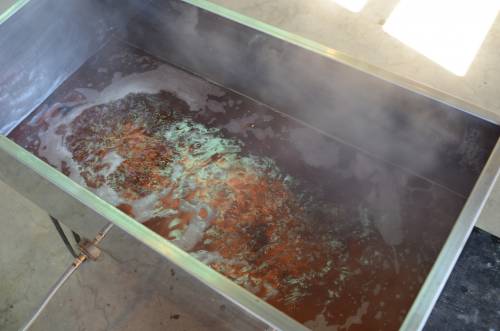 Sap boils in a evaporator at the Baskett Research Center.

“You do have less control with the evaporator because you can’t just shut it off,” Knapp said.

“You always have fresh sap coming in,” Knapp said. “The continued influx of sap in the back means that the sap in that location has a lower sugar content. The sap toward the front has a much higher sugar content because it generally stays in the evaporator longer.

“When it’s really going, you can do all of those things together.”

The evaporator boils the sap to remove the water. The goal is to hit 67 percent sugar. Once it hits that mark, it officially becomes maple syrup.

Once the maple syrup hits the perfect sugar content in the smaller boiler, Knapp runs the syrup through another filter. The syrup is then directed into numerous glass syrup bottles via a tubing system.

The syrup is graded based on color. Knapp said a lighter color comes with a lighter flavor. The darker syrup has a richer, stronger flavor.

“The first run tends to lead to lighter syrup,” Knapp said. “It gets darker and richer later in the year.”

Knapp did something a little different this year during the collection process as well. He measured the sap in each container, making notes on how much sap each tree produced.

“There were definitely some patterns,” Knapp said. “We really wanted to begin the process of keeping records so that we can see how the trees perform from year to year. This was a good start.” 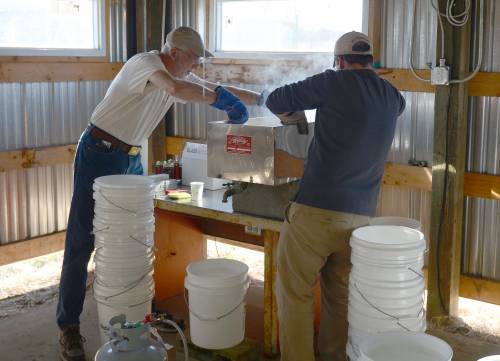 The syrup is used in a couple different ways. Knapp generally rewards the volunteers with some of the syrup. It is also used, at times, in promotional settings.

Knapp would like to grow the promotion of Baskett as well. Whether it be selling the syrup or bringing people out to the Baskett Research Center, Knapp is hoping to showcase the importance of natural resource management.

“There is definitely room for development,” Knapp said. “We would like to really promote what we do at Baskett. There is a market there where we could do a lot of promotion. It’s all about getting word out.

“The general public probably doesn’t think about maple syrup coming from Missouri. All of the maple syrup you see has Canada or Vermont pretty clearly stamped on there. The syrup is just one thing that happens at Baskett, too.”

Support for the Baskett Research Center maple syrup project is provided by the CAFNR Foundation.