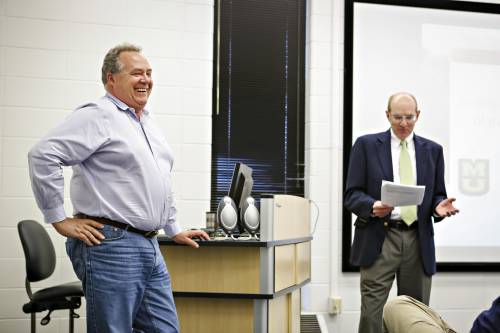 A pencil and paper may be required to recall all of the awards that Jeremy “Jerry” Taylor, Curators Professor of Genetics and Animal Sciences and Wurdack Chair of Animal Genomics in the College of Agriculture, Food Science and Natural Resources at the University of Missouri, has won.

Next month, that list will get a little longer.

Taylor, a University of Missouri Curators’ Distinguished Professor of Genetics and Animal Sciences and the Wurdack Chair of Animal Genomics in the College of Agriculture, Food Science and Natural Resources’ Division of Animal Sciences, will be recognized by the Academy of Science of St. Louis at the 2017 annual Outstanding St. Louis Scientist Awards.

Taylor will be presented with the 2017 Fellows Award on April 6 at Chase Park Plaza Hotel in St. Louis. The annual reception ceremony and dinner serve as an opportunity to celebrate the scientific talent within the St. Louis community.

The Academy of Science of St. Louis states that Taylor is recognized on an international stage as one of only a handful of researchers to have translated molecular genomic methodologies to accelerate genetic improvement within the livestock industry. In addition, he has authored 235 peer-reviewed journal articles and been cited nearly 14,000 times.

According to Mizzou Advantage, Taylor’s research methods have helped cut the extensive financial and environmental costs associated with generating DNA profiles, and he has helped establish the use of DNA-based genomic improvement in nearly all livestock species. Taylor has also given over 400 national, and 60 international, invited presentations.

‘It was a complete surprise’

The Academy of Science of St. Louis was founded in 1865 under the premise of continuing the advancement of science in the rapidly growing Midwest city. The nonprofit organization sought to promote the studies of zoology, mathematics, and physics, among other disciplines.

The academy’s first elected president was George Engelmann — a distinguished figure in the fields of botany, physics and meteorology. By 1881, less than 20 years later, the organization’s library contained more than 3,000 books and approximately 8,000 issues of scientific periodicals.

“It’s very nice to be recognized and to be considered among that group of intellectuals.”
― Jerry Taylor

In 1995, the academy’s Fellows Society launched the St. Louis Outstanding Scientist Awards — seeking to honor professionals in science, engineering and technology fields that represent an “extraordinary caliber of expertise.” The Academy of Science seeks to “focus the region’s attention upon individuals, institutions and corporations known worldwide for their scientific contributions to research, industry, and quality of life.”

“It’s very nice to be recognized and to be considered among that group of intellectuals,” says Taylor. “It was a complete surprise, I had no idea that I had been nominated for the award… it’s a great honor. If you look at other people that have been awarded fellowship in the St. Louis Academy of Sciences, a large number of those individuals are from Washington University and are really amazingly accomplished scientists, so it’s just a great honor to have been admitted to the academy and to be among what I consider to be a really superb group of scientists from Missouri.”

For a complete list of previous recipients of the Fellows Award and additional information on the 2017 Outstanding St. Louis Scientist Awards and the Academy of Science of St. Louis, please visit www.academyofsciencestl.org.

Apart from the academic acclaim

Taylor was born in England and moved to South Australia when he was 4 years old — living in military barracks in the city of Adelaide for a few weeks before moving to the town of Elizabeth, a northern suburb of Adelaide, where he spent much of his youth. 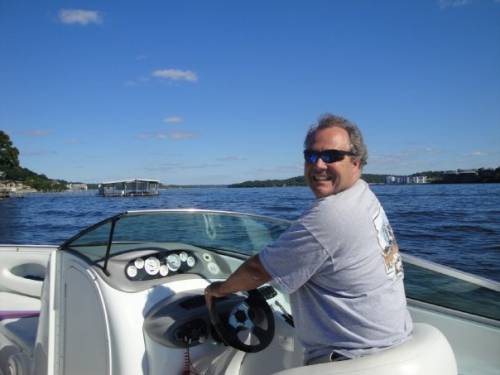 Jerry Taylor on his boat at the Lake of the Ozarks. Photo courtesy of Jerry Taylor.

While speaking of his childhood in South Australia, Taylor remembers long weekends spent wreck diving, catching lobsters, spear fishing and camping out on the beach with his father. From the time he was 14, Taylor would travel a few hundred miles north of home to pick fruit and earn a few hundred dollars, taking care of himself for five to six weeks at a time. At age 16, Taylor bought his first motorcycle and surfboard with the money he earned on those expeditions.

“It was a really outdoor kind of lifestyle… the weather was warm and dry most of the year. It was a really great place to grow up,” says Taylor. “I really enjoyed my life as a child and the freedom that I had growing up.”

Nowadays, when Taylor is not in his lab, he enjoys woodworking and performing mechanical repairs in his workshop. If he isn’t in his workshop, it is more than likely he will be found at the Lake of the Ozarks – away from the lab and international travel.

When the weather is nice, Taylor and his family enjoy spending weekends at the Lake of the Ozarks, appreciating the views of the region, surrounded by family, friends, their dogs and their boat.

“We can be out of here at 5 o’clock and be home and picking up the dogs and some food… and have the grill on by 6:30 down at the lake,” says Taylor. “It’s a fabulous secret that more people on this campus ought to be aware of.”

The road to genetics

However, he would soon find himself in a peculiar situation and interviewing with an insurance company in Adelaide, not long after graduation.

“These people just don’t look like me,” Taylor thought to himself.

Things would change quickly when one of Taylor’s professor’s from the University of Adelaide, having traveled to his house on a Saturday not long after his interview with the insurance company, knocked on Taylor’s door and offered him the opportunity to complete a Ph.D. in genetics at the University of New England, Australia where he would go on to develop genetic evaluation systems.“We managed to pack three winters into just over two years in Ithaca.”
― Jerry Taylor

Once Taylor finished his Ph.D. he traveled – along with his wife and young son at the time – to Ithaca, New York, to complete a post-doctoral fellowship at Cornell University under his mentor, Robert Everett. After two years at Cornell, and several harsh Northeast winters, Taylor returned to Australia.

Not long after, Texas A&M University came calling, and Taylor would spend 13 years teaching there, working alongside his friend and colleague, James Womack, a professor in the university’s veterinary pathobiology department. In 1996, Taylor was awarded the Vice Chancellor’s Award in Excellence for his contributions and performance within A&M’s graduate teaching program. 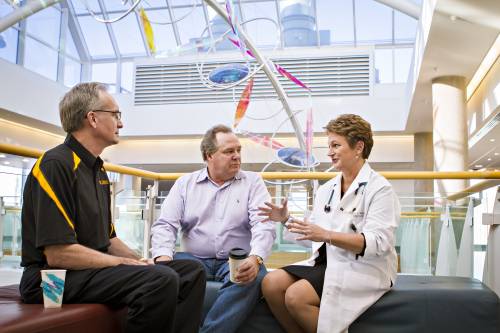 On October 1, 2002, Taylor joined the MU Division of Animal Science. In July 2011, he was appointed as an MU Curators Distinguished Professor.

“I really viewed that the Division of Animal Science here was really one of the premier research groups within the world,” says Taylor. “I wasn’t going to be alone, I was going to be in a group of really good people doing really cutting-edge work…There is really a collaborative research environment here at Mizzou.”

As a member of the Missouri Quality Beef by the Numbers team, Taylor and his fellow research partners were awarded the 2013 National Institute of Food and Agriculture (NIFA) Partnership Award for Mission Integration of Research, Education and Extension.

In 2014, Taylor received the MU President’s Award for Sustained Excellence for his lasting impact on agriculture and agribusiness.

In 2016, the Mizzou Alumni Association awarded Taylor with the 57th annual Distinguished Faculty Award – the highest honor presented by the organization.

“I have had a great, supportive environment here with lots of really good collaborators and have been very successful in terms of getting grants funded,” says Taylor. “I have been able to surround myself with much smarter people than I, and that always is a great strategy for success.”