The sun is setting on the well-worn path to the dairy barn where Michelle Eilenstine milks cows.

Eilenstine is part of a small group of women dairy farmers in Missouri. They are deeply passionate about what they do for a living, said University of Missouri Extension dairy specialist Reagan Bluel. Bluel leads the MU Extension Women in Dairy program that began this year to offer social and educational opportunities for women dairy farmers.

At 12, Eilenstine helped her father do afternoon milking. By 14, she walked a mile across a pasture after school to milk her uncle’s cows. Her 4-H club, Udders and Hooves, and Mountain Grove High School FFA laid the foundation for an animal science degree from the University of Missouri College of Agriculture, Food and Natural Resources. 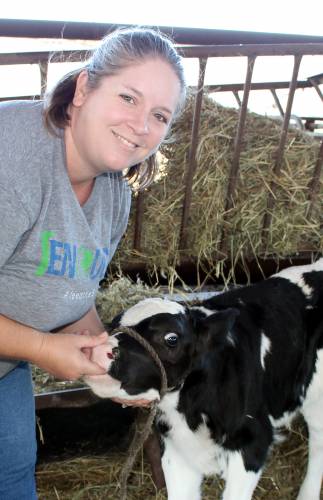 Eilenstine planned to return to the family farm with degree in hand. Like her father and grandfather, she was born to be a dairy farmer. She is one of Missouri’s 85 principal operators of a dairy farm who are female, according to the 2012 USDA Census of Agriculture.

“I always liked being in the barn,” she said. “It’s very relaxing.”

She and her husband, Loren, operate Ram-Elle Holsteins and Jerseys. They have 35 head of cows and hope to expand their numbers and technology.

Michelle milks in the afternoon and Loren does morning milking. Her husband grew up on an area dairy farm. Until this year, he worked as a crane operator on an oil rig, a job that kept him from home three weeks at a time.

A week after their son’s birth, Loren returned to the oil rig. Michelle nursed their son, and took their week-old baby to the milking barn with her twice daily to milk the cows.

“It was a good day if he slept all the way through milking,” she said.

Her 65-year-old father, James Ramaeker, raises corn for silage and grows hay to feed the cows. Her mother, Carolyn, is a retired paraprofessional and cares for their son, now 3, while Michelle milks.

In 1982, 11 of the family’s dairy cows died when a tornado destroyed the house, milk barn and hay barn. The family replaced these buildings. Then, in 2003, they added a freestall barn and manure system using Missouri State Milk Board guidelines. They worked with MU Extension dairy economists and engineers to rebuild the operation.

Rebuilding a dairy herd takes time and money. The tornado occurred during a time of high interest rates. The rebound has been gradual and planned. Today, Michelle hopes to improve technology at the farm.

“We look to use advancements in technology to improve the herd’s performance in the future,” Michelle said. For example, she uses her smartphone to track cow records instantly. “Even on a small farm, topics like electronic calving monitors and robotic milkers pop into the conversation when talking about the future of the herd.”

She hopes to expand the herd to 60 head through heifer replacement.

The milk barn has its own rhythm. At 6 a.m. and 6 p.m., the cows clock in to work. They patiently take their turn and line up in stalls waiting for Michelle to put the milking machines on the cows’ udders. The swish-swish of the machines fills the air. One set of cows clocks out, another clocks in.

The cows produce about 185 gallons of milk daily for a Springfield milk company.

Michelle likes the autonomy of working alone most of the time. She and Loren work by themselves most days, and a young neighbor helps part-time.

“Being your own boss is the best thing, and the worst thing,” she said.

Michelle builds her business on doing things right. She believes in hard work and not cutting corners. “You’ll reap the benefits if you do things right,” she said.

The next generation is off and running. The Eilenstine’s 3-year-old son, Chase, and heifer Bambi won blue ribbons at the Tri-County Fair and Missouri State Fair this year. He plans an encore performance in 2017.

Michelle participates in MU Extension’s Women in Dairy program to socialize with other women who have the same joys and problems. Most dairy meetings focus on male operators, she said.

“It’s nice to be able to share problems with other women.”

Bluel said the group gives them time to talk about the unique challenges and joys of dairy farming.

“In addition to learning, one of the primary goals was to ensure that there was an opportunity for women dairy operators who work really hard day in and day out to seek solace and to breathe briefly,” she said. “Women in Dairy programs give them a place to talk and to know they are not alone. They may want to talk about a newborn calf, plummeting milk prices or about a special cow that died. It’s very personal.”

Michelle said dairy farming can be isolating because it is so labor-intensive. Other chores and socializing must fit between morning and evening milking. Slow-cooker and oven meals are routine. The family schedules holiday events around milking time. “That can be a challenge,” she said.

Physical demands of the job — from lifting pitchforks filled with hay and moving heavy gates and equipment — take their toll. Cows need to be milked despite heat, cold, ice and mud.

Despite the challenges, Michelle lives and breathes dairy.

Women operate only 1.1 percent of dairy farms, according to a 2007 USDA report. Milk production is labor-intensive, so most women in dairy do not have off-farm jobs. In Missouri, the 2012 USDA ag census reported there were 87 dairy farms with a woman as the primary operator. This is down from 144 in the 2007 report.

For more information on the MU Extension Women in Dairy program, contact Bluel at BluelRJ@missouri.edu or (417) 847-3161.