When looking on the west side of the “white campus” across of College Avenue, the Agricultural Engineering Building looks to have the same white limestone as its counterparts, but take a walk inside the courtyard area and the red brick that is synonymous with Lafferre Hall shoots out to the second floor.

This was by design as a way to honor both of its origins at the University of Missouri’s College of Agriculture, Food and Natural Resources and the College of Engineering. 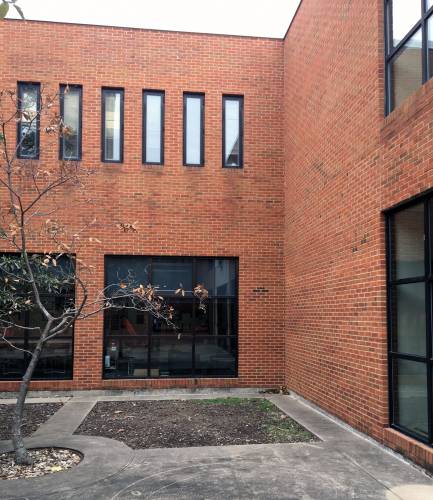 “It looks ‘ag-y’ from the outside but internally it’s engineering,” says Jinglu Tan, who has served as the director of the Division of Food Systems and Bioengineering since 2000. “Our colors show our connections with both colleges.”

The current building, which opened up in 1987, sits near the site of three previous buildings that housed the former agricultural engineering department from 1924 to 1985. “When I talk to visitors or new people about it, they are always intrigued,” Tan said.

The exact start date of the agricultural engineering department is a bit fuzzy. Tan jokes that explaining the history of the his division, which is largely rooted in agricultural engineering, would take a “three-credit class.” In the early 1970s, former department chair Mack Jones wrote a history of the department, which which would lay the groundwork for the current agricultural systems management (ASM) and bioengineering departments. That document has since been amended. Tan, who has been at MU since 1990, plans to write a few more chapters before he ponders retirement.

As the book explains, there has been some uncertainty as to the actual date of the formation of the department, ranging from 1914 to 1917 – making it one of the top 15 earliest established departments of its kind in the country. 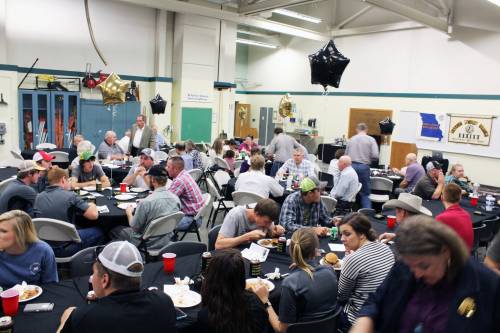 What cannot be questioned, though, is the importance that the department has had on the lives of so many people tied to both CAFNR and the College of Engineering. So on Nov. 2, 2016, several current ASM and bioengineering students gathered at the Agricultural Engineering Building with alumni and former professors to listen to the stories that have helped define the previous 10 decades.

That celebration, “100 Years of Engineering for Agriculture,” will continue at 6 p.m. Feb. 10 in Room 135 of the building. The event will feature guided building tours, demonstrations and displays in an open-house format. Brats from Mizzou Meat Market and light refreshments will also be provided. Although there is no cost to attend, event planners will accept donations, which will go to the Sandy Zaring Memorial Scholarship Fund (read story about Zaring here). There are also plans to hold a third event on the afternoon of April 29 at South Farm Research Center, featuring equipment and drone demonstrations.

When the National Academy of Engineering released its greatest engineering achievements of the 20th Century, agricultural mechanization was rated seventh. For the record, electrification was voted as the top achievement, followed by the automobile and the airplane. 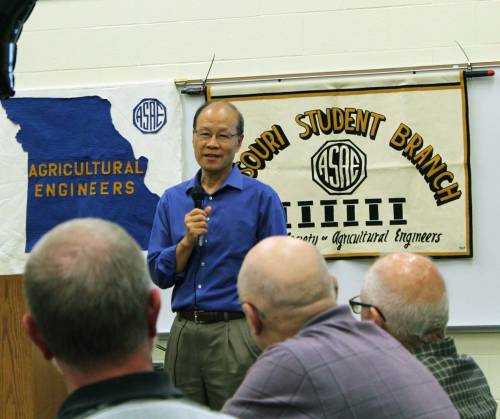 “Most people don’t realize that,” Tan said of the seventh item, pointing to the fact that nearly 40 percent of Africa is still suffering from food insecurity, according to the Food and Agriculture Organization of the United Nations. “This is so fundamental, but much of the world is still struggling to do that.”

Around the turn of the century, close to half of Americans were involved in some form of agriculture. At the current moment, that number has dipped down to about 1 percent, but still many Americans enjoy food security due to advances in agricultural mechanization (large machines to fertilize, treat and harvest plants and automated irrigation systems, for instance) that most people tend to take for granted.

That group of people does not include Leon Schumacher, who has served as the ASM program chair since 2006 after coming to MU in 1987 from Iowa State University, where the first agriculture engineering department was formed in 1905. 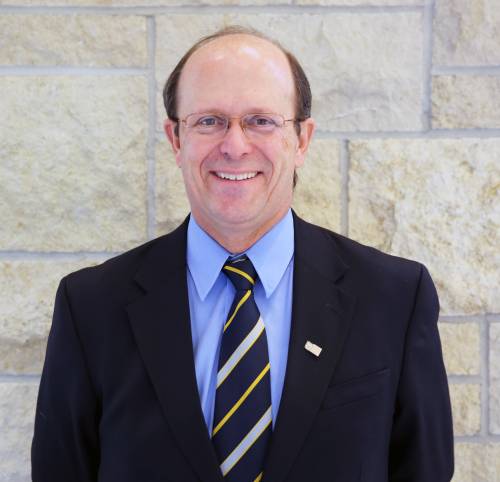 Growing up in North Dakota in the ’50s and ’60s, Schumacher remembers having to use a pitch fork and load bales of hay into a truck or trailer by hand – and using a six-foot drill behind a four-bottom plow to plant seeds – before mechanized farming equipment started entering the national landscape in the ’70s.

“The whole thing started shifting at a really rapid rate,” said Schumacher, who was recently named as a fellow of the American Society of Agricultural and Biological Engineers.

Now he thinks about the equipment that his brother uses at his large farming operation in their home state, complete with tractors, loaders, combines – and an air seeder that can cover a width of 53 feet at a time with seeds of wheat, barley, soybeans, peas and other crops.

“It made things a whole lot easier for us to get involved in music, in art, even politics,” Schumacher said of the time saved through the use of mechanized farm equipment. “The machines just kept growing and it was ag engineering that really made that possible.”

The start of a program 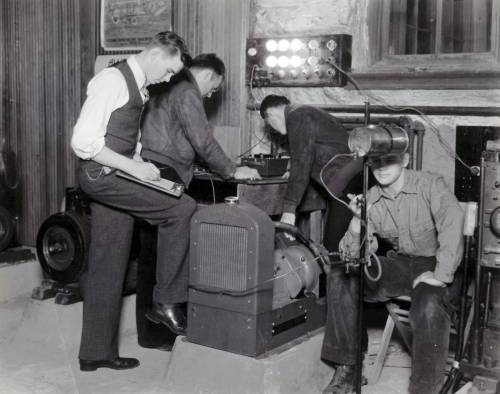 In 1912 Manly Alexander Raymond Kelley became the first instructor hired by MU (on a nine-month appointment) to teach agriculture engineering. Two years later agricultural engineering became an official department after the agronomy department split into three different parts, the other two being soils and farm crops. Kelley was named the “instructor in charge,” but not the first chair. That title would go to E.W. Lehmann in 1916, who, like Kelley and several colleagues after him, received his training from Iowa State. 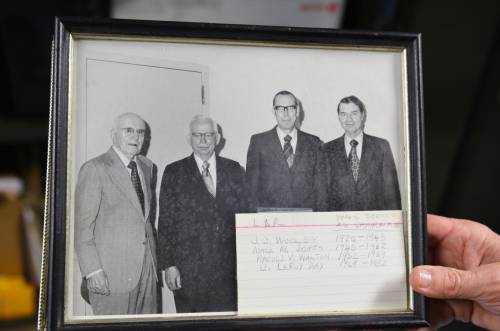 In the spring the Army arranged for MU to train automotive mechanics in 60-day intervals. Most of that training took place in the “livestock pavilion” built in 1914, which would eventually become the original agricultural building that would feature the bull tie-ring that now sits in the plaza of the current building.

Following the end of World War II in 1945, student enrollment as a whole increased, largely due to soldiers taking advantage of tuition being covered through the G.I. Bill. To make room for the extra students, MU had several war surplus buildings used at Camp Crowder in Neosho, Missouri, dismantled and reassembled on the MU campus.

One of those was T-12 (“T” standing for temporary), a 70-foot-by-240-foot structure that arrived in 1947 and would later endear itself to all who would use the multipurpose building for classrooms, offices, mechanic shops and equipment storage. 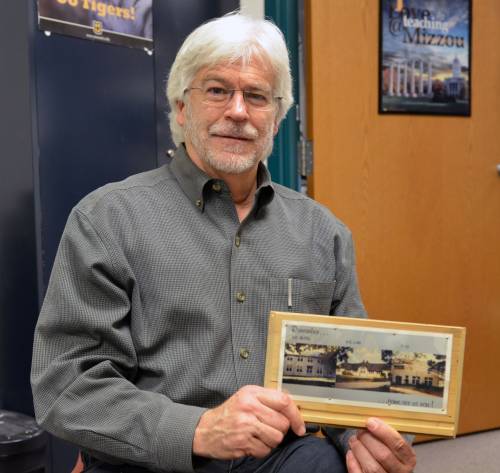 “Everybody working in T-12, seemed to become closer friends, loved and defended T-12, even entering a car named T-12 in the Boone County Demolition Derby,” said Neil Meador, who served as the chair of the agricultural engineering department from 1982 to 1989, before retiring as a professor in 2000.

Meador recalled a digester that was built to conduct digestion research on manure. It was situated in T-12, right next door in the classroom.

“Every once in while that digester would belch and the students obviously knew what that smell was. It was not a good situation, but it was a funny situation,” Meador said. 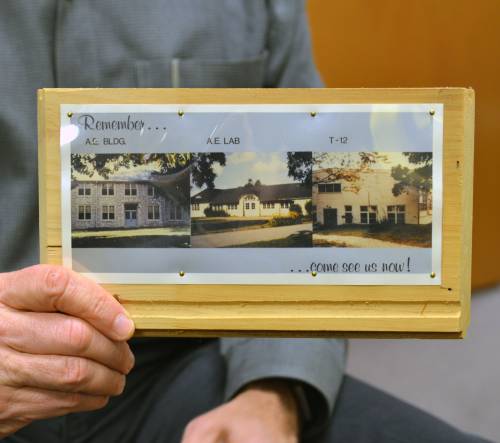 A close up of the invitation.

“Throughout his life many people called him ‘chief,’” said Steve Borgelt, who graduated with bachelor’s and master’s degrees in agricultural engineering before becoming a faculty member in 1989.

“It just seemed as my mentors and instructors, as they retired, they would have things that they would pass on,” Borgelt said. “They just started giving me these things and I just kept them. I’m glad I have.”

Among the things in Borgelt’s collection is a slide rule made of ivory and bamboo, that Brooker, an expert on the subject of grain drying, had personally given him before passing away in 2009. 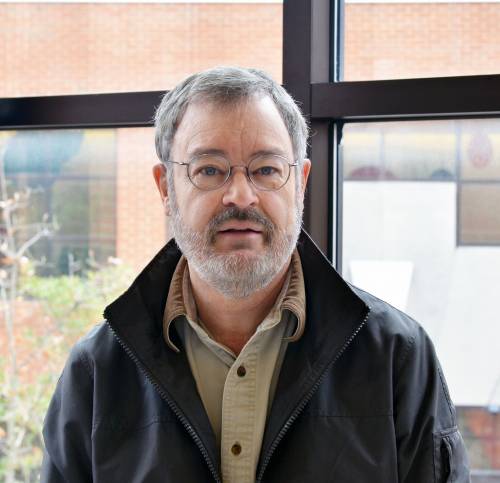 David Brune, a professor in ASM, recalls first walking into Brooker’s office as a junior at MU in early ’70s after deciding to switch his major from chemical engineering to agricultural engineering. As the story goes, Brune was north of Columbia one day when he pulled over after seeing a farmer plowing a field.

“I smelled the smell of fresh-tilled earth and all my memories of growing up on a farm and working on a farm came back to me,” Brune said. “It was right there and then where I said ‘I can’t do this. I can’t become a chemical engineer.’”

Brune eventually went on to earn bachelor’s and master’s degrees in agricultural engineering before becoming a pioneer in the field of aquaculture engineering, first at the University of California-Davis, and later at Pennsylvania State University and Clemson University. To this day, any farmer in the South looking to get into the aquaculture business will enviably construct a variation of the paddle-wheel system he patented at Clemson. He returned to MU in 2009.

“The main thing that stands in my mind is that the people who were my teachers were legends in agricultural engineering,” Brune said. “Don Brooker was already a living legend when he was my advisor. I was just incredibly lucky to have stumbled into his office.” 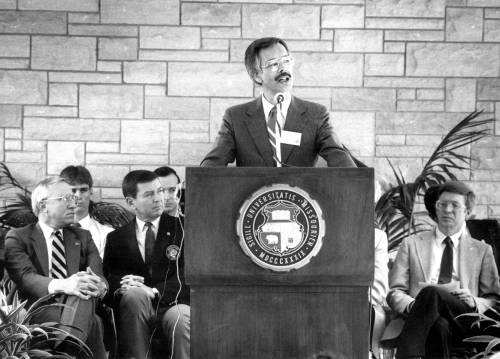 This year also marks the 30th anniversary of the opening of the Agricultural Engineering Building, built on top of the area where T-12 once stood. Around the same time, in spite of the building’s name, talks began to change the name of the department to biological engineering – to meet the growing national interest of careers and research pursuits in the field of biotechnology.

“I was convinced that we had to be a department that was based out of both colleges,” said Meador, who graduated with an agricultural engineering degree in 1961. 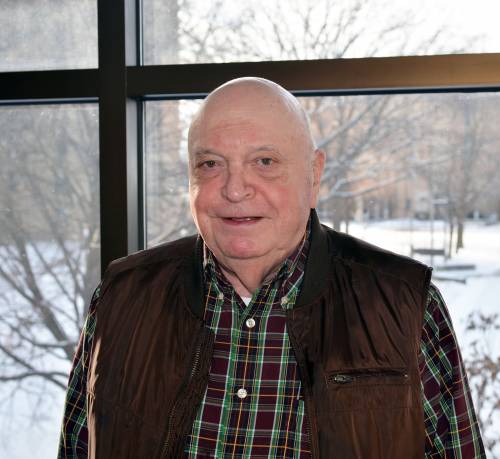 At the Nov. 2 event, John Hoehne addressed the crowd, talking about what has remained the same over the years, as technologies, equipment and objectives have changed. Hoehne earned two degrees in agricultural engineering (B.S, ’66; M.S., ’72) before going to work 30-plus years for MU Extension and later becoming an extension assistant professor in 1991.

“The constants are that as an ag engineer you need to learn the basics. You still have to calculate the basics. Now we have computer programs that will do a lot of that for you, but you still have to understand and kind of know what the answer is supposed to be,” said Hoehne who recommended that students who wish to go into the field these days should double major with a degree in ASM and either civil or mechanical engineering.

“The basics of wood construction, and steel construction and concrete construction, machine. You still have to understand the dynamics, basic science and applying it to solve the problem. Obviously the problems have gotten bigger, but the basics are still the same.”