KIRKSVILLE, Mo. – Despite retirement, Charlie Rosenkrans remains among the top cheerleaders for the University of Missouri’s College of Agriculture, Food and Natural Resources and MU Extension.

Rosenkrans retired from MU Extension in 2000 after almost four decades of service. He received his master’s degree from MU nearly half a century ago.

At 80, Rosenkrans is still learning and teaching MU Extension research and methods. 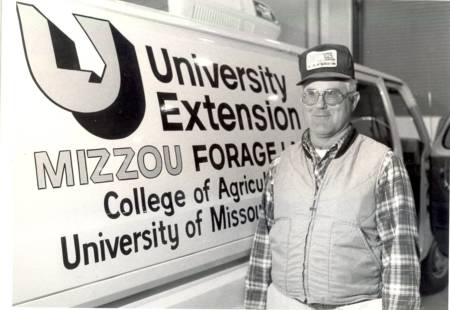 The Missouri Livestock Symposium, coordinated by MU Extension, presented Rosenkrans with the 2016 Agriculture Educator Lifetime Achievement Award on Dec. 2 at the annual event in Kirksville. The award adds to a long list of honors that he and his family have earned working with 4-H, agriculture, community and church groups.

Rosenkrans came to Mizzou fresh from the dairy farm near his parent’s home. He was working on the farm when an MU Extension agent visited to talk about terraces. During his visits, the extension agent repeatedly encouraged Rosenkrans to consider college. Finally, he drove him and other area youth to MU for career day.

Rosenkrans was the first person in his family to attend college. He would not be the last. Four of his sons graduated from MU with animal science degrees.

Rosenkrans began his extension career July 1, 1962, in Milan. Over the next 40 years he worked as a livestock specialist in Pike, Mercer, Grundy, Harrison, Putnam, Daviess, Sullivan, Miller, Morgan, Monroe and Shelby counties.

Rosenkrans learned the importance of communication early in his career. In 1962 he began a weekly newspaper column, “Chattin’ With Charlie,” which ran in newspapers statewide for 40 years. His sentences were short, simple and easy to understand. The column and regular radio segments were among the ways he helped people improve their lives through MU research. 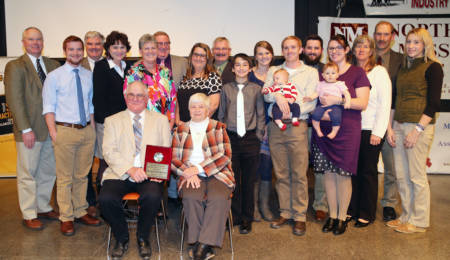 Charlie and Leslie Rosenkrans’ blended families celebrated his latest award with him at the Livestock Symposium in Kirksville.

Rosenkrans says he learned that education and change are slow to come. He found that he could introduce new ideas to adults through their children’s 4-H projects. He says it is important for extension specialists to be in the field and on the barn lot talking to farmers and their families instead of at their desks. Face-to-face interaction helps develop relationships that earn specialists the trust of those they serve.

Extension work often goes beyond one’s own specialty, and Rosenkrans was active in working with 4-H youth. He began the cured ham project that helps 4-H’ers earn premium prices for projects. The family recently began teaching 4-H’ers how to cure slabs of bacon. He and his wife, Leslie, keep more than 90 cuts of meat in their freezer for 4-H meats judging team members to study. He has coached two 4-H livestock judging teams and a dozen 4-H meats judging teams that went to national competition.

Aside from continuing to teach youth, Rosenkrans remains a student of extension-recommended programs. He recently began participating in the Alliance for Grassland Renewal to reduce fescue toxicosis by converting Kentucky 31 tall fescue to novel endophyte species. For more than 20 years, he has enrolled five to 15 steers with the Tri-County Steer Carcass Futurity Cooperative feed-out. The co-op measures feedlot performance, average daily gain and carcass data on steers and heifers. Producers use the information to make improvements in breeding and management practices that result in higher market prices.

He still keeps 60 to 65 Angus and Hereford cattle and three bulls at his Monroe County farm northwest of Paris. He visits the Ralls County home place several times a week to check on cattle he and his son have there. During calving season, he goes there daily.

There is still time for a little fishing and a lot of volunteering. He especially enjoys his work with the Paris Lions Club at Mark Twain Lake’s Hunt for Physically Challenged Hunters. He and his wife are active in the Paris United Methodist Church and many community activities.