Adolfo Rosati and his son, Fafa, steal a taste of the… Expand ▸

This is part one of a two-part story exploring the process of collecting sap and turning it into maple syrup at the Baskett Research Center near Ashland. Part two can be found by clicking here.

The University of Missouri College of Agriculture, Food and Natural Resources’ Baskett Wildlife Research and Education Center, near Ashland, spans nearly 2,300 acres and includes more than 80 species of trees.

Included in that expansive forest are numerous sugar maple trees. From January to March, those maple trees offer a unique opportunity – a chance to tap them for maple syrup.

Led by Baskett superintendent Ben Knapp, more than 30 volunteers tapped around 100 maple trees in late January. More than 150 trees have been tapped this year in total at Baskett. 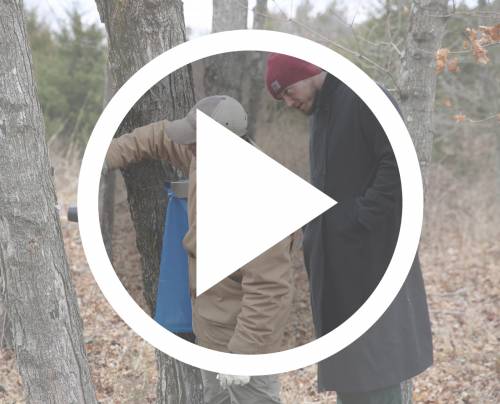 “I thought it was great to have that interest from our volunteers,” Knapp said. “It was a lot of fun, and everyone did a great job. It’s great to introduce people to activities that they can do in the forest. That exposure is important to what we do.”

The volunteers came for a variety of reasons – from those who were just interested in maple syrup to those who are studying agroforestry or forestry practices. Hannah Hemmelgarn, a graduate research assistant in agroforestry, has tapped maple trees in numerous areas. She made the trip to Baskett to learn about different tree-tapping techniques.

“I’ve actually tapped maples in several places, using a few different methods,” Hemmelgarn said. “I feel like I still haven’t quite got it, and I really want to do it right.”

The group at Baskett used two different tapping methods this year after using just one during the past several years. The most common method used at Baskett includes using a plastic tap. The first step for this method involves drilling a small hole into the tree. After the plastic tap is hammered into the newly drilled hole, a short, plastic tubing is attached to the tap to help the sap flow down from the tree and into a five-gallon bucket, hung from the plastic tap. 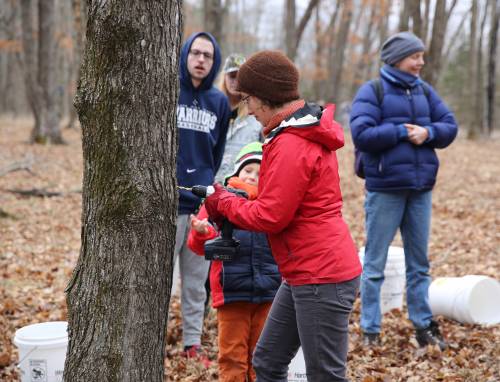 While this method has been used at Baskett in the past, it was the first time that Hemmelgarn had used plastic taps.

“I’ve read a lot about tapping, and everyone has differing opinions,” she said. “It’s nice to be able to learn about different methods, including the plastic taps. I’ve never used those before.”

Knapp unveiled a new method to collect sap at Baskett this year, though it’s one that is commonly used in other places. Like the plastic tap, the first step is to drill a hole into the maple tree. A metal spile is hammered into the hole and a metal holder is placed on the spile. A plastic bag, called a Sap Sak, is hung from the holder.

“They’re using the Sap Saks a lot out east,” Knapp said. “We had a faculty member out there, and they were sending me pictures of the saks. We looked into how they worked and decided to buy some. They’re becoming more common.”

Knapp plans to see how the saks work out before ordering more. The volunteers hung 25 saks during the most recent tapping. There could be pros to using the saks, such as keeping debris or insects out of the sap.

“I think there could be a real benefit to using them,” Knapp said. “If we find that they work well, I’ll definitely be in favor of buying more. If they do some of those little things – like keep debris and rain out – that’s a real benefit. Plus, they can be had at a pretty low cost.”

Knapp has been involved with maple tree tapping at Baskett since he joined MU in 2012. That was the same year that Rich Guyette, professor emeritus in the School of Natural Resources, received a grant to install an evaporator at Baskett. The evaporator boils and cooks the sap into maple syrup. There is an approximate 40-to-1 ratio for turning sap into syrup. Forty gallons of sap equals one gallon of maple syrup. 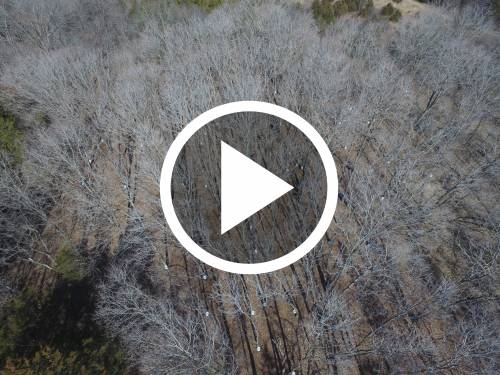 A sky-high view of the maple trees that are collecting sap. Photo and drone footage courtesy of Kristopher Corbett.

Knapp said the amount of sap collected at Baskett is completely dependent on the weather. When the weather is perfect, Knapp said each tree can produce several gallons of sap in a day.

“When you get that contrast, that’s the best,” Knapp said.

The maple syrup season generally runs from January to March.

“It’s all dependent on the weather, though,” Knapp said. “When the trees bud and start leafing out, the flow will stop. You won’t get sap after that.”

The day that the volunteers tapped was an ideal day, as the sap started flowing as soon as the spiles and taps were hammered into the trees.

“This tapping was really amazing,” said Badger Johnson, a graduate student in agroforestry who was attending his third tapping at Baskett. “This is what motivates me to do forest farming. It’s community building and connects people to nature. That human-nature connection is great. It also gets everyone into the forest during a time where you typically wouldn’t go to the forest.”

While Johnson, whose research is focused on forest farming, has spent plenty of time in the forest at Baskett, it was Adolfo Rosati’s first trip to the Research Center. Rosati is a visiting scientist from Italy, who received a scholarship from the Fulbright Scholar Program to conduct agroforestry research. 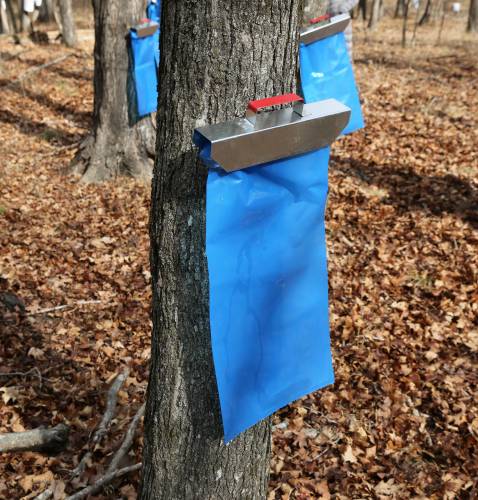 This is the first year that the Baskett Research Center has used Sap Saks to collect sap.

Rosati, his wife and two kids all attended the maple tree tapping.

“This has been an extra bonus to my trip,” Rosati said. “I know Minnesota and Canada are known for their maple syrup. I didn’t think about maple syrup in Missouri. I have an interest in maple tree tapping. I’ve tried this in Italy, but I’ve learned that you need special temperatures. Those temperatures don’t happen that often where I’m from. It wasn’t very successful.

“It’s great to learn more about maple tree tapping, and I’m hoping to be able to produce a little bit of maple syrup at our farm at home for our family. We produce our own cheese, vegetables, fruits and chickens. Maybe we can make our own syrup as well.”

The maple trees that the volunteers tapped have been tapped in previous years. Most trees only have one tap – the thicker trees can handle two.

Knapp took over the organization of the tree tapping last year. Along with adding the saks, Knapp is hoping to try a few other maple syrup techniques. For example, Knapp said that the recommendation is to put the taps on the south side of the tree. While they don’t practice that at Baskett for every tap, it’s something that Knapp said he would be interested in looking at.

“The south side of the tree is going to get the sun hitting it more often,” he said. “If you’ve got a freeze at night and the sun hitting it the next day, you could get a better thaw. It’s possible that the north side may not thaw. There could be differences between the sap flows.

“It’s something we could compare in the future. The logic definitely makes sense.”

The next step in the process at Baskett is collecting the sap and boiling it.