Karl Kerns (right), a doctoral student in the Division of… Expand ▸

Thank goodness for caffeine. There’s pulling an all-nighter and then there’s what Karl Kerns would do at one point as a doctoral student in the Division of Animal Sciences working in the laboratory of Peter Sutovsky – when he would, at times, arrive in the lab at 7 a.m. and not leave until 7 a.m. the following day.

“Once you get past midnight you’re fine,” Kerns said. 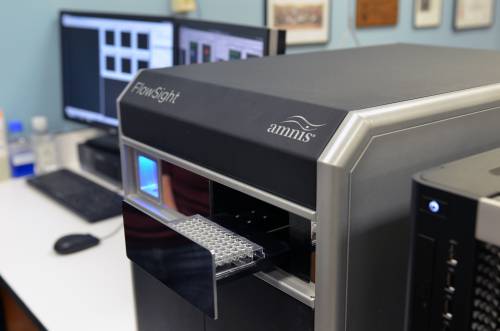 The FlowSight flow cytometer in Peter Sutovsky’s lab is the only instrument of its kind on the MU campus.

During those 24-hour stays in the lab, Kerns would be running time-sensitive samples of boar sperm through a specialized device known as a FlowSight image-based flow cytometer. The problem was the machine – which can take nine to 12 pictures of each cell contained in the sample at a speed of up to 2,000 cells per second – could only process one sample at a time. Although each sample contains five million sperm, Kerns is only analyzing 10,000 of them, equaling up to 120,000 images for sample.

That all changed when the FlowSight, one of a few in the country found in an academic setting, received an additional tray last December, giving it the ability to analyze up to 96 samples during one cycle.

“Now I can let it do its own thing and actually analyze data simultaneously to turn research over more quickly,” Kerns said.

“My circadian cycle is so much better now,” he joked.

A few months earlier Kerns received more good news: he had received the highly selective Food, Agricultural, Natural Resources and Human Sciences Education and Literacy Initiative Predoctoral Fellowship through the Agriculture and Food Research Initiative of the U.S. Department of Agriculture’s National Institute of Food and Agriculture. The fellowship includes a $95,000 grant award.

“I was shocked,” Kerns said when he was notified of receiving the fellowship. “I was really hoping it would come through, but you never put too many eggs into one basket with this type of grant award, so it was a very pleasant surprise.”

‘Beyond a graduate student’

Kerns became the first graduate student who has worked for Sutovsky to receive the fellowship. Sutovsky is a professor of reproductive physiology who also has an appointment as a professor of obstetrics, gynecology and women’s health at the School of Medicine. He is also a member of MU’s Integrated Reproduction and Health Group and the Food for the 21st Century Program.

“I’ve been blessed to work with very, very talented students and associates, but this is definitely by far the most important award any of them have received. This is big,” Sutovsky said. “He’s quiet, hard working, focused and he has a clear idea of what he wants to do. He’s really beyond a graduate student. He’s a really big part of the team and very central to what we do.” 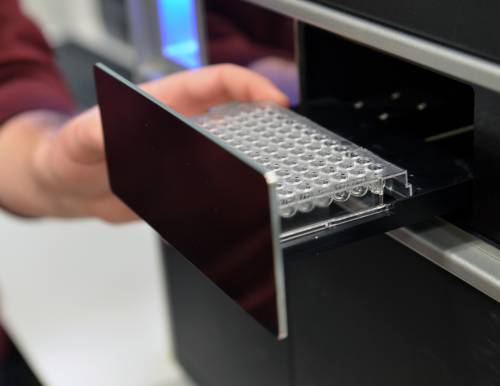 Sutovsky said Kerns has become the main overseer of the FlowSight flow cytometer, even attending specialized training from the company that makes the device, Amnis, at the company’s headquarters in Seattle. In this role, Kerns has helped play an important part in the breakthroughs Sutovsky’s lab has been able to make in regards to sperm analysis in both the animal and human sectors.

“It’s thrilling doing this research because you get to see things probably for the first time that no one on Earth has seen before,” said Kerns, referring to the work he is doing related to his doctoral dissertation on the role the ubiquitin proteasome system plays within sperm capacitation.

Last fall, an academic paper published in the Proceedings of the National Academy of Sciences by Sutovsky and another doctoral student of his, Won-Hee Song, showed the connections of two ubiquitin-binding proteins and the ability to create embryos in swine that included both maternal and paternal mitochondrial DNA, which could lead to new study treatments for mitochondrial diseases in humans.

Although the capacitation process, which occurs in the female reproductive tract, was discovered in the early 1950s, there still remains much to unveil. The process prepares the sperm for the final step of actually approaching the egg, bonding and then penetrating through the egg’s surface to fertilize it, Sutovsky said. Furthermore, if the sperm does not meet the eggs within an hour or so after being capacitated, they will die.

Kerns co-authored a paper with Sutovsky and a Chilean researcher in May 2016 about initial research into sperm capacitation as relating to the ubiquitin proteasome system that appeared in the journal Biology of Reproduction.

Born into the business

Kerns was born and raised near the small town of Clearfield, in southwest Iowa, about 15 miles from the Missouri border. Since 1976, his family’s business has overseen the pioneering of swine artificial insemination (or what is commonly referred to as AI). The company, International Boar Semen, established North America’s first genetic boar stud practice. It sends genetics to clients in 28 countries to further the genetic progress of various herds throughout the world.

“I got acclimated to different technologies and animal sciences right away at a young age,” said Kerns, whose family acquired the business outright in 1992, just a few months before he was born. His reasons for going into his chosen field is “partly because of family legacy, in that I want to pursue something that our family has been involved in the past, but I’m also very passionate about this type of research.”

Kerns went onto study animal science, with an emphasis in reproductive physiology, at Iowa State University. At Iowa State, he worked in the lab of Jason Ross, who was mentored by Sutovsky’s colleague, Randall Prather, Curators Distinguished Professor of Reproductive and Molecular Biology, while working as a postdoctoral fellow at MU from 2006-08. After graduating from Iowa State in 2014, Kerns knew exactly where to head next, given his interest in male fertility. He ended up being a recipient of the division’s Frederick B. Miller Fellowship as well as an MU Graduate Studies Fellowship.

“Nowhere else in the world can you find such a group. Being able to bounce ideas off each other, even in the hallway, you just don’t find that anywhere else.”
―Karl Kerns

“You ask people and that’s always hands down the best place to go,” Kerns said of Sutovsky and his lab, where the first academic paper was authored on using image-based flow cytometry for sperm analysis in 2009.

The other reason Kerns wanted to pursue his Ph.D. at MU was to be a part of the Animal Reproductive Biology Group community.

“Nowhere else in the world can you find such a fantastic reproductive physiology group,” Kerns said. “Being able to brainstorm ideas with each other, even in the hallway – you just don’t find that anywhere else.”

Although Kerns plans on working one day as a professor in an academic setting after finishing his degree in either 2018 or 2019, he would like to follow Sutovsky’s footsteps in creating a biotech startup business to help implement research into the private industry at a quicker rate.

“It doesn’t matter what research is performed and what you discover if it’s not eventually applied and translated,” Kerns said.

He is also hopeful that the work he is doing now in unveiling events leading up to fertilization and validating biomarkers of fertility in boars – and will do in the future – will help contribute to increased animal protein production for human consumption in developing nations on a grand scale, especially when paired with other emerging reproductive technologies.