The 2016-17 academic year is shaping up nicely for Joe Parcell, interim director of the Division of Applied Social Sciences. An avid fan of the Chicago Cubs, Parcell’s fall semester involved enjoying his team’s playoff run and eventual World Series win – the first since 1908. 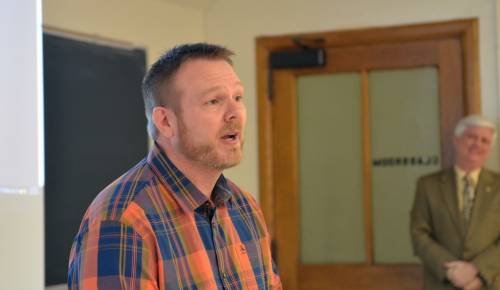 Parcell thanks his nominators and his students after receiving his award.

Recently, Parcell’s spring semester started off well, too – winning an honor of his own: the Golden Apple Award from the College of Agriculture, Food and Natural Resources for going above and beyond in teaching and advising. Parcell was nominated by Jill Moreland, instructor of agricultural and applied economics, and Jill Findeis, professor of agricultural and applied economics and former DASS director.

On the morning of Feb. 10, Bryan Garton, associate dean and director of academic programs; Parcell’s wife, Julia, and a group of CAFNR faculty colleagues interrupted his ag marketing class at Mumford Hall to reward him for his efforts. Parcell joked that Garton only interrupted a class “to give an award or to fire someone.” He assumed it was the prior.

Parcell began his career at the university in 1998 as an assistant professor after receiving his Ph.D. in agricultural economics at Kansas State University. Since then, he has served in a variety of capacities, most recently as DASS interim director, overseeing agricultural and applied economics, agricultural education and leadership, science and agricultural journalism, and rural sociology. He has recently taught courses on the agricultural marketing system, speculative trading, and agricultural prices. His nominators noted that the student evaluations from his courses are consistently impressive.

“Dr. Parcell greets every student… with a bright smile and an upbeat energized attitude,” one particular student commented.

“Dr. Parcell cares deeply for each student who he encounters in the classroom,” students also observed. “He does not hesitate to take time to help each student learn.”

Recently, Parcell was selected as the first MFA Professor of Agribusiness, an endowed professorship, sponsored by MFA Incorporated, MFA Oil and the MFA Foundation, that supports education and research. Previously, Parcell served as the director of the Missouri Value Added Development Center from 2001 to 2013 in a collaboration between CAFNR and MU Extension. 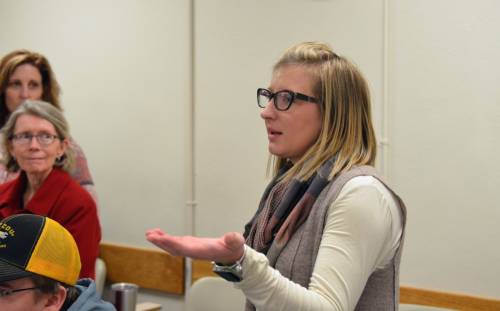 Jill Moreland, nominator and former student of Parcell, explains why he is deserving of a Golden Apple.

During his time at MU, Parcell has also been named as Outstanding Faculty Member given by DASS in 2010, Most Inspiring Professor from the Student Athlete Advisory Council in 2004 and Outstanding Educator Award presented by the Ag Econ Club in 2002.

Moreland and Findeis concluded their nomination of Parcell saying, “It is our belief that Dr. Joe Parcell is one of the greatest true gems of CAFNR.”

Garton supported Parcell’s nominators saying, “Joe Parcell is an excellent teacher, advisor, and mentor to our students.  In class he strives to ensure the highest quality of educational experiences that prepare students for their future careers.  Dr. Parcell strives to provide students with a working knowledge, not just an understanding, of economics and the impact on the local, national, and world economy.  As for advising, he strives to ensure the student experience at Mizzou of the best quality and that students are prepared for their future careers.” 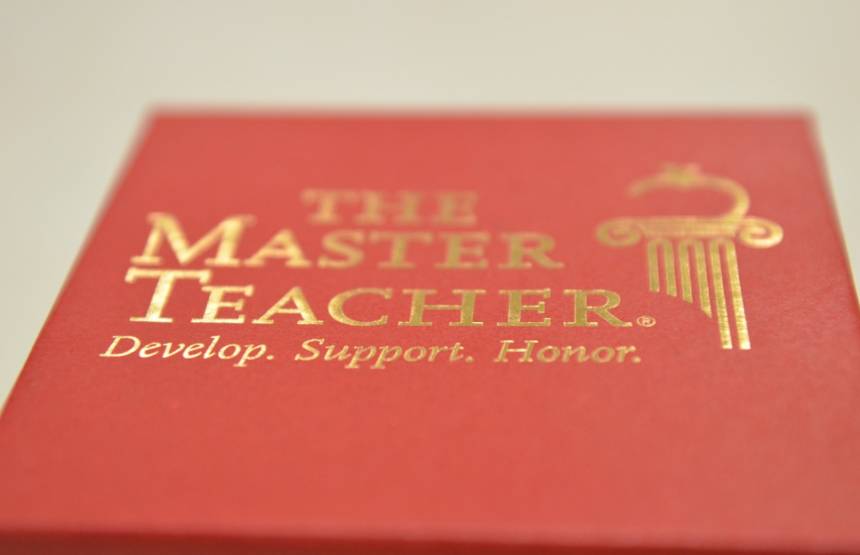 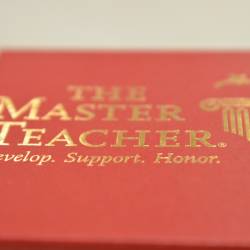 The Golden Apple Award is given to a faculty member who goes above and beyond in teaching and advising. 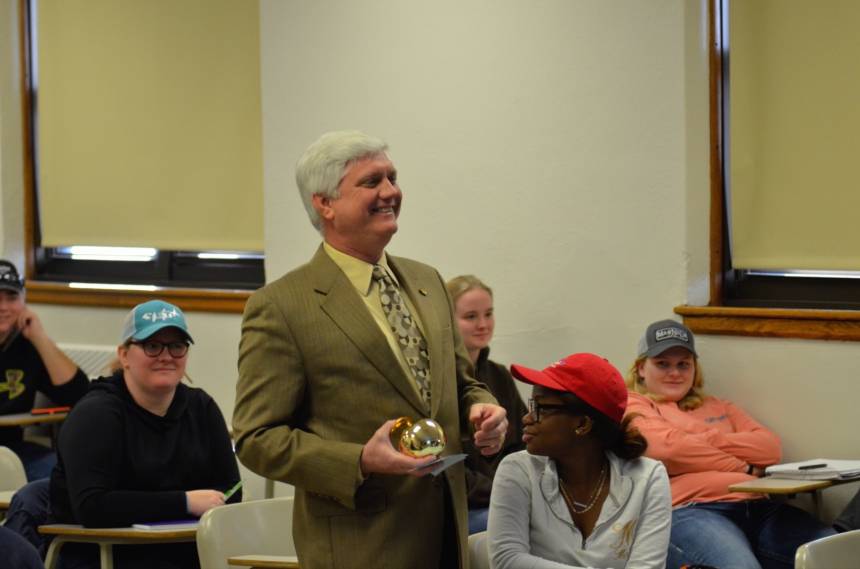 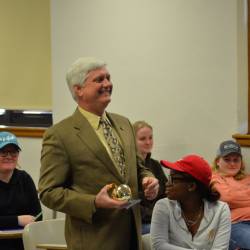 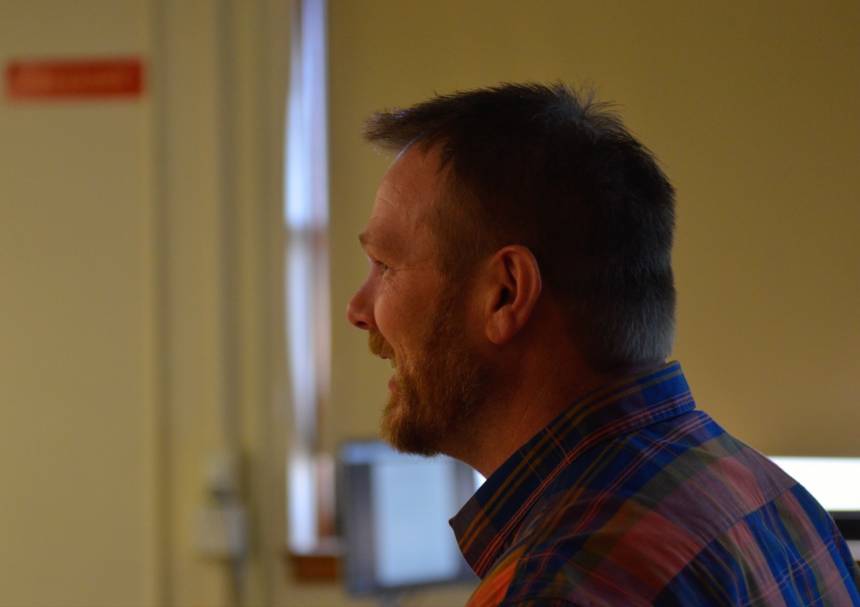 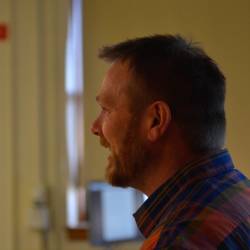 Parcell sees his wife and colleagues enter and notes that he would have dressed up had he received a notice. 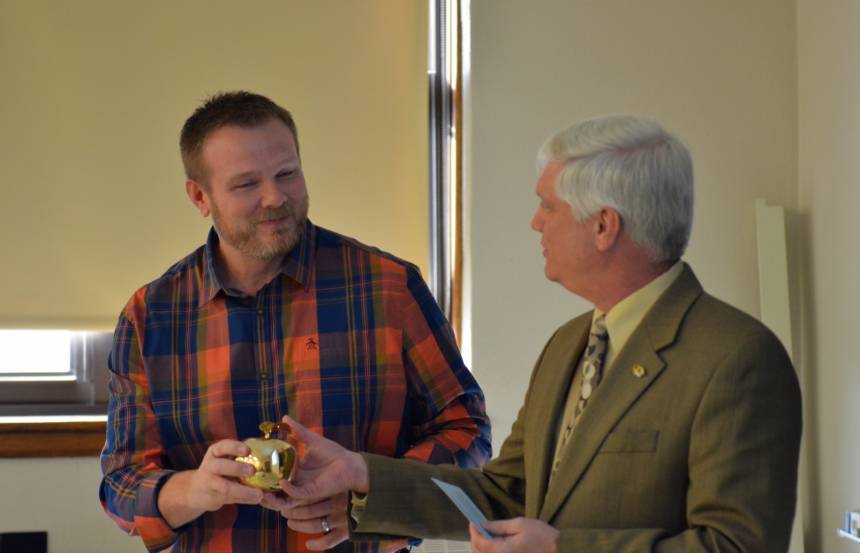 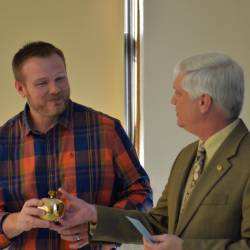 Garton handing off the Golden Apple. 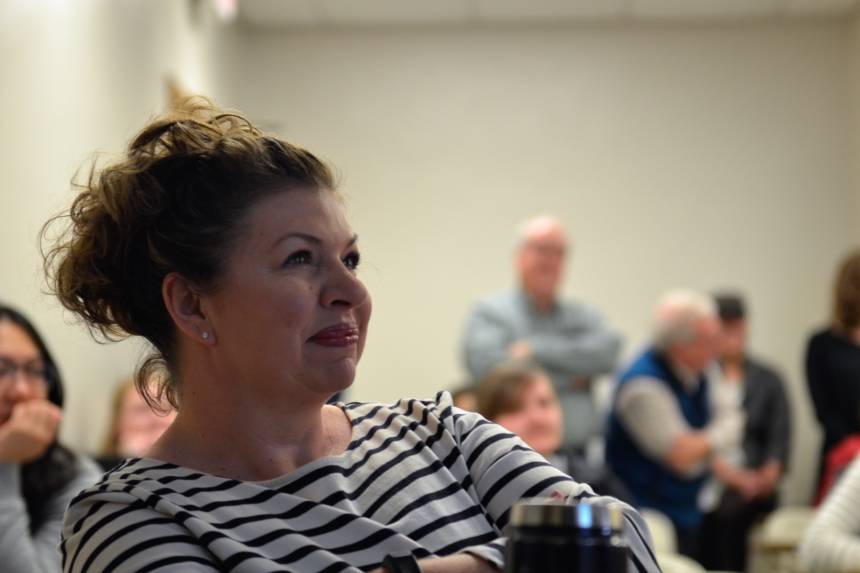 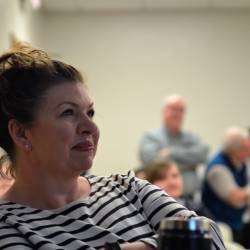 Those in the classroom watched as Parcell was being honored. 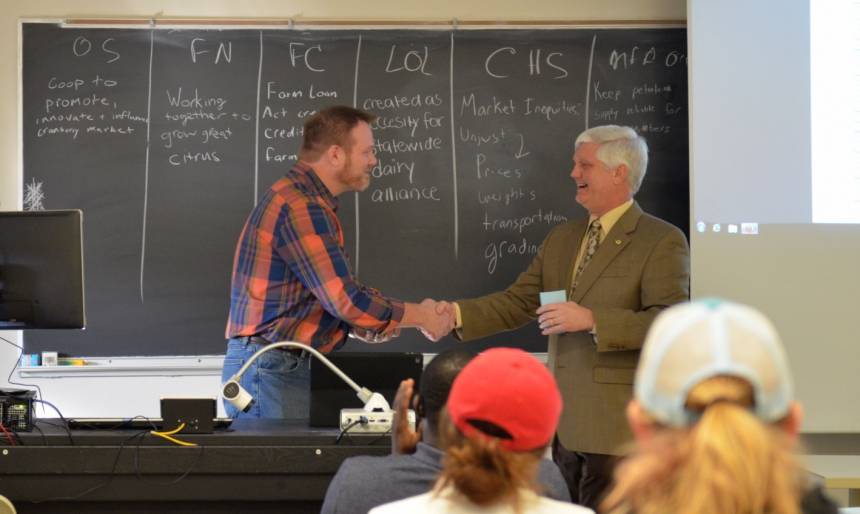 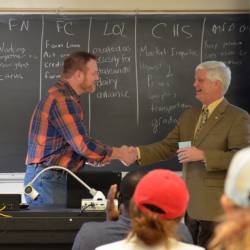 Parcell told his students that Garton only interrupted a class "to give an award or to fire a someone". He had assumed that it was the prior. 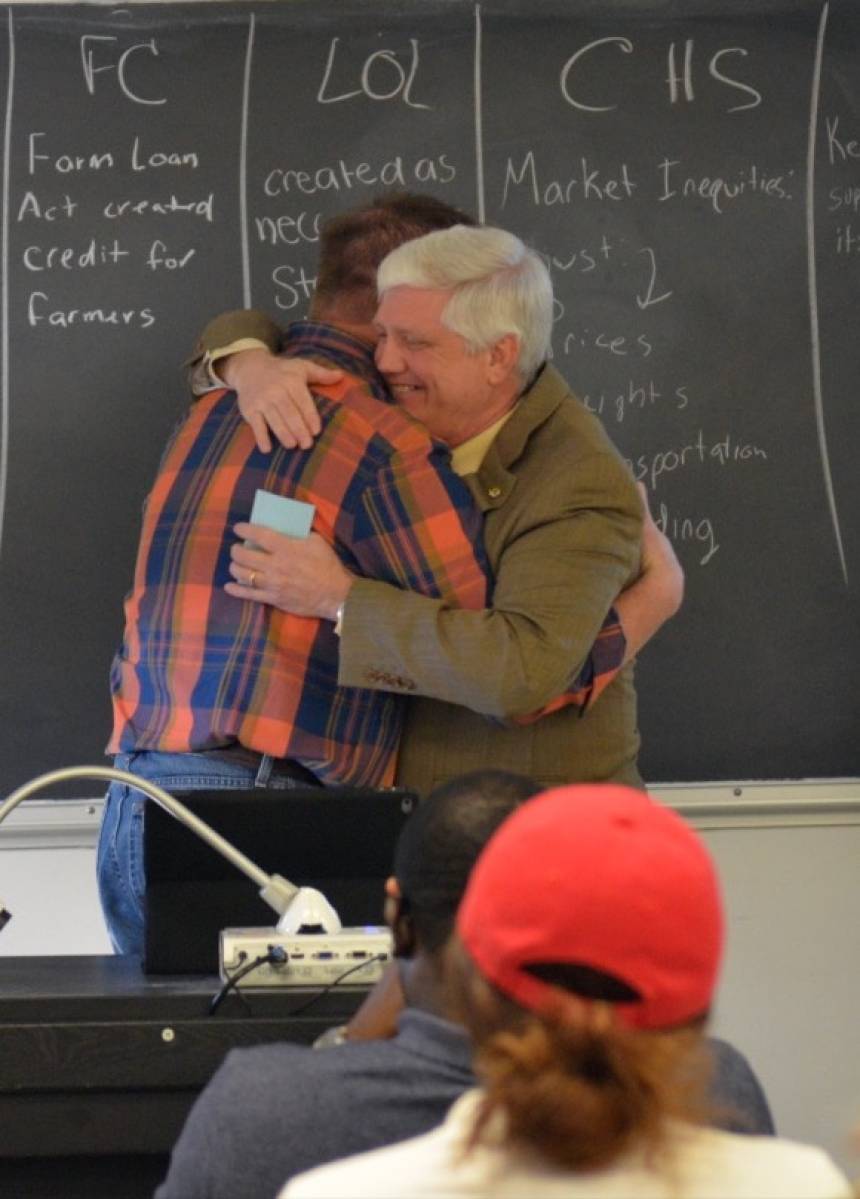 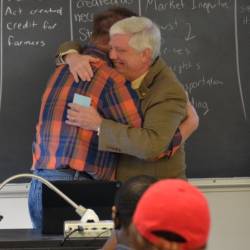 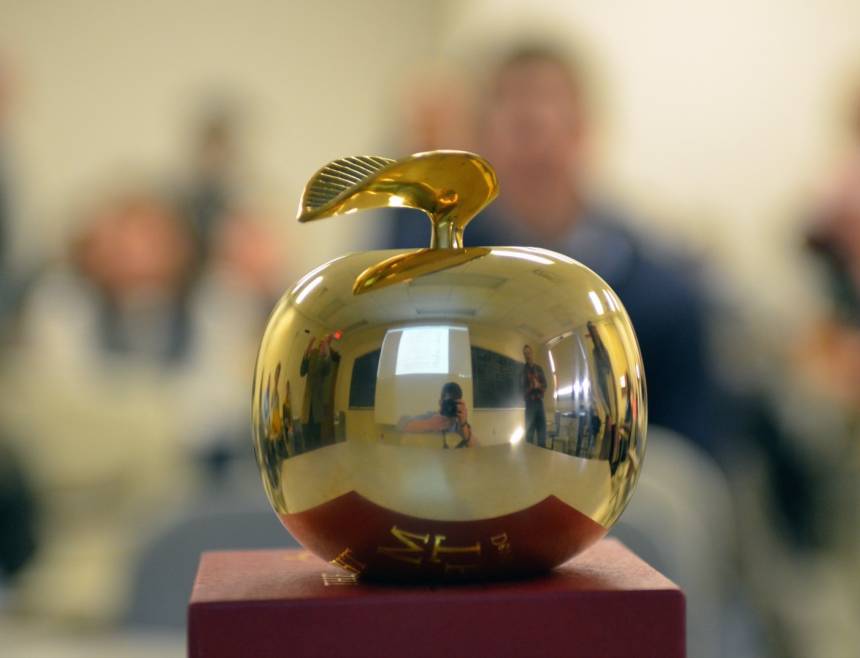 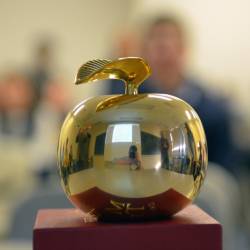 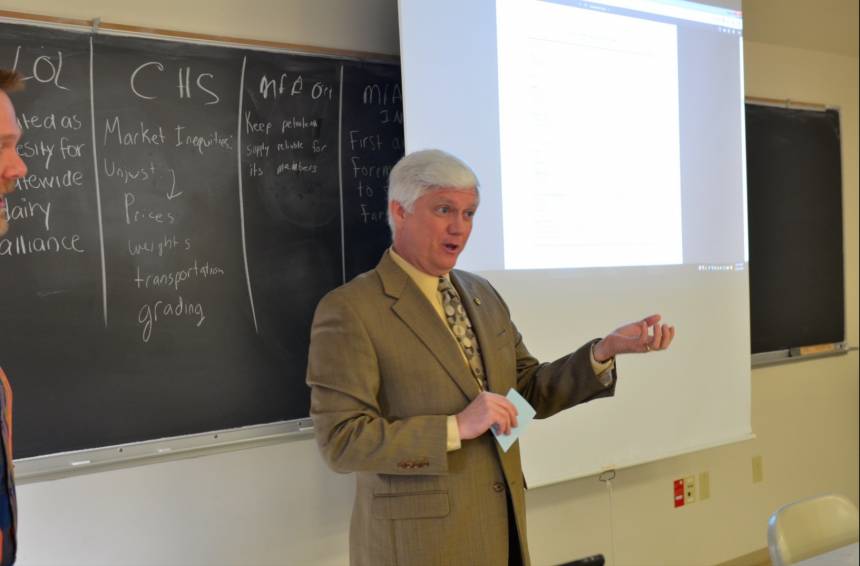 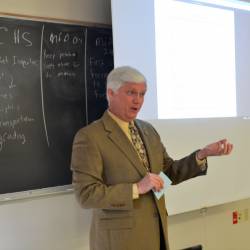 Garton explained Parcell's history with CAFNR and worthiness of praise. 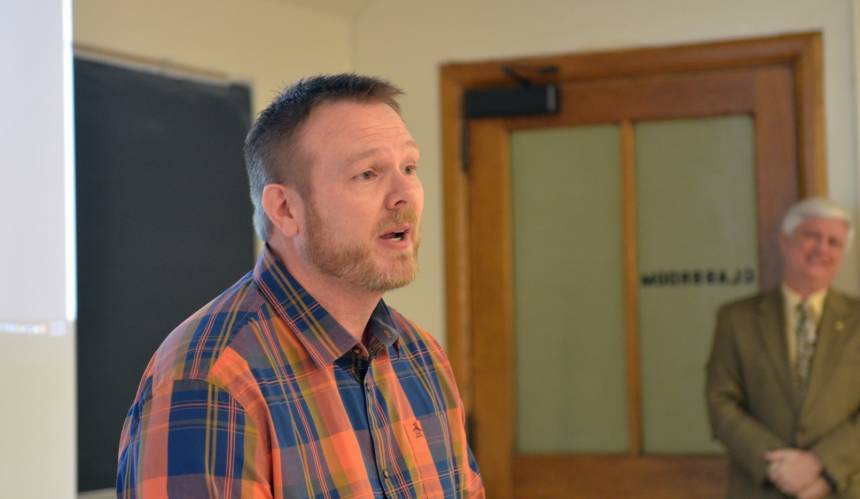 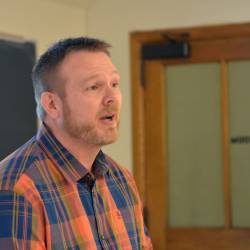 Parcell thanks his nominators and students. 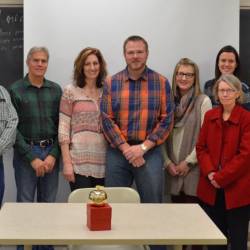 Parcell is joined by his wife and CAFNR faculty. 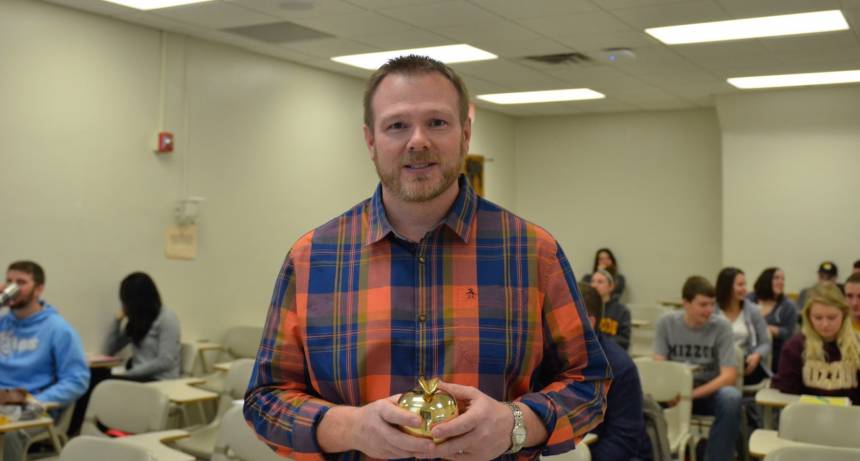 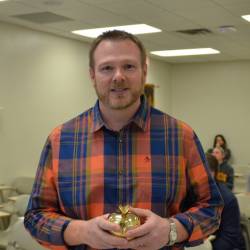 Parcell with his prize. 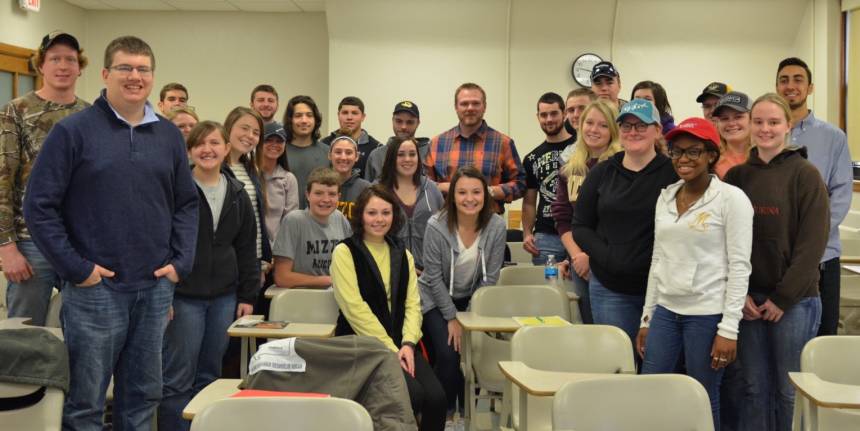 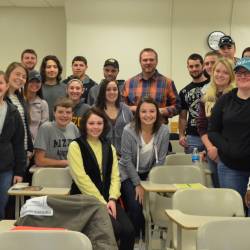 Parcell is joined by the students of his Ag Marketing course.