The four Ukrainian professors who took part in the USDA's… Expand ▸

Talk about a full itinerary: Phoenix, Grand Canyon, Las Vegas, Los Angeles, San Francisco. And that was just part of the two-week trip in the middle of a five-month stay that a group of 10 Ukrainian agriculture professors, some of whom had never been to America before, took across the United States in October.

Yet the four professors who were assigned to the University of Missouri for five months as part of the Faculty Exchange Program (FEP) — sponsored by the U.S. Department of Agriculture’s Foreign Agricultural Service (FAS) — had one collective favorite place after all of their travels: Columbia.

“I like the spirit of Columbia,” said Dmytro “Dima” Kyryliuk, a senior lecturer in economics at the National University of Life and Environmental Sciences of Ukraine (NULES). “You feel here like everybody is your family. It’s really cool when you’re walking down the street and you realize you’ve met a lot of people who treat you like you’re family.” 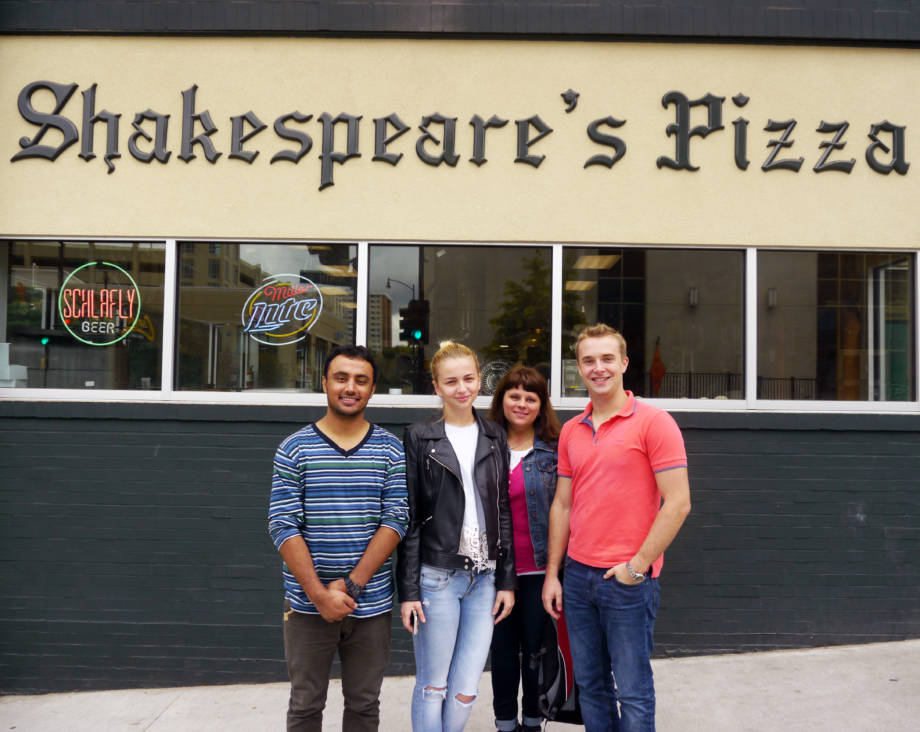 Established in 1995, the FEP has provided training opportunities for 310 educators from 23 countries. The College of Agriculture, Food and Natural Resources and CAFNR International Programs (CIP) last participated in the program in 2011, when they hosted four students from four different East African countries.

Currently, the Ukrainian program is only active one — allowing professors the opportunity to “increase their knowledge of, and ability to teach, agricultural economics, marketing, business and law in a market-based economy” according the program’s web page. The other six from their group studied at The Ohio State University’s College of Food, Agricultural and Environmental Sciences.

The four Ukrainian scholars arrived in Columbia in August by way of Washington, D.C., about a month before the fall semester started so they could thoroughly review all of the possible classes to audit. They later interviewed professors before deciding which classes to audit, most of which were taught within the agricultural and applied economics department in the Division of Applied Social Sciences. The expectation was that the professors would audit three to four classes, but Kyryliuk said each of them audited four to seven classes.

One professor, though, Olha “Olga” Yatsenko, ended up auditing a total of nine classes. She also would spend several hours a week improving her English through classes at local churches, at MU and through an online course she purchased.

“She is one go-getter,” Ken Schneeberger said of Yatsenko, a professor of economics and international trade at the Kyiv National Economic University (KNEU). One of her favorite classes was a course taught by associate professor Kevin Moore that delved into understanding basic international trade theories, concepts and policies using a variety of analytical methods.

Kyryliuk and Yatsenko were joined in Columbia by fellow Ukrainian scholars Dmytro “Dima” Didukh, a senior lecturer in the Department of Accounting, Taxation and Audit at Zhytomyr National Agroecological University, and Olena “Elena” Cherniavska, an associate professor of international economics at KNEU.

“Elena was the expert at documentation,” Meyers said. “She would post pictures on Facebook that were accompanied with the background information on the place or event that even we hosts did not always know.”

Cherniavska was nominated by her peers to be the “PR manager” for the group. As such, she took and chronicled more than 2,000 photos from their travels across the U.S.

‘They came to learn’ 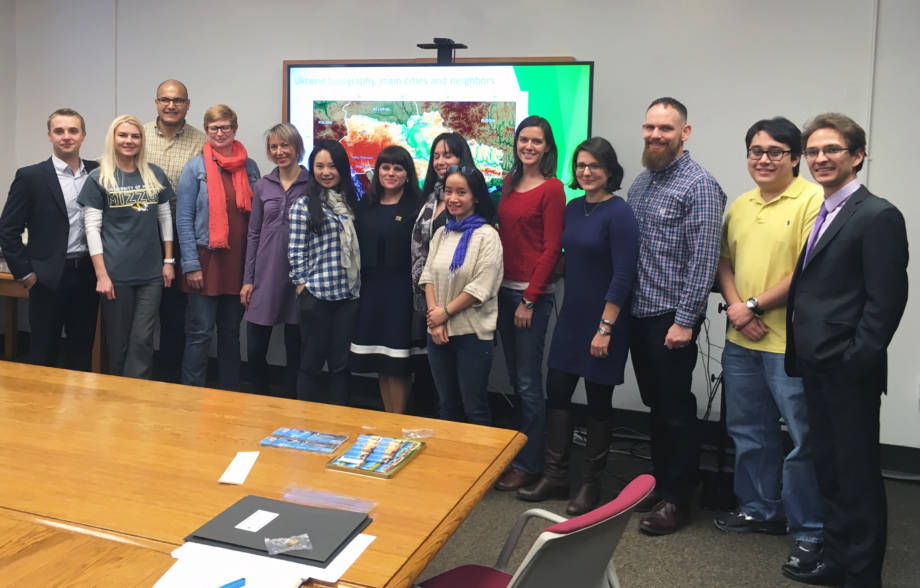 Schneeberger, the international training coordinator of CIP, served as a co-mentor for the group with Willi Meyers, CIP director. Both of them would meet weekly with the quartet to make sure all of their academic needs were being met. They were also in charge of scheduling a series of trips outside of the MU campus, including visits to local co-op farms, MU Research Centers, the Missouri State Fair and a trip to St. Louis to go to the Danforth Plant Science Center, Monsanto headquarters and World Trade Center St. Louis.

“This group would come in on weekends,” Schneeberger said. “They would come in and work until midnight. They were incredible. They were really here to get the full experience. They weren’t here on a vacation. They came to learn.”

While they were on campus, the CIP provided them several resources and social outlets with fellow international students made possible through connections with graduate students and visiting scholars in the agricultural and applied economics department and with Ukrainian and Russian-speaking friends who Meyers and his wife, Dali, invited to a welcome party at their home. The scholars were also introduced to Russell Zguta, a professor of history at MU who teams one of the few existing Ukrainian history courses in the U.S., Meyers said.

“We really worked to get them connected to a number of different groups,” Schneeberger said.

At the end of their time in Columbia, all four visitors had a determination to play their part to modernize the rigid, lecture-based model of teaching that still remains the norm in Ukraine.

“Relationships between students and professors in Ukraine are very strict and formal. Our team will try to change it and create a friendlier environment of communication,” Kyryliuk said. “The biggest thing that we want to bring to Ukraine is that we want to take the experiences of relationships between the professors and the students and also the quality of education.” 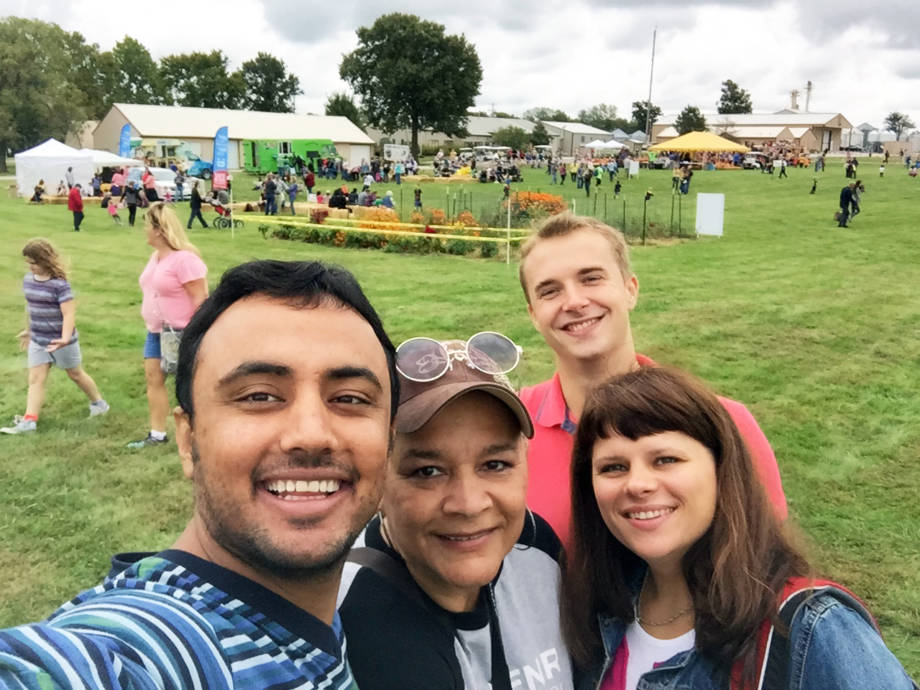 “I will use the relationships between professors and students at the University of Missouri as a model of behavior: benevolence, openness, transparency, parity of relations, mutual respect and mutual support,” Yatsenko said via e-mail.

Yatsenko added: “My dream is a small United States in Ukraine. I want to see the same level of life in my country. I dream to see the smiles on the faces of children and old people, who are confident in their future.”

One of Cherniavska’s favorite aspects of her time at Mizzou were the weekly lunch-and-learn meetings that were conducted with colleagues and researchers in the agricultural economics department. “We don’t have such meetings at my university, but I hope to organize such scientific communications in Kiev,” she said via e-mail.

Furthermore, Cherniavska was impressed after sitting in on a Preparing Tomorrow’s Leaders for Science (PTLS) class, where she heard representatives from Monsanto talk about the importance of a large international company to prepare a communication strategy and share its science with the public This experience has inspired her to try to create a similar economic-focused program at her institution. “We need to teach students how to become true leaders in every sector of the economy,” she said.

In addition, the Ukrainian scholars were fascinated with entire U.S. election process, leading up to Election Day on Nov. 8, when they spent the evening watching returns with several other visiting scholars and students at Meyers’ home. In Ukraine, there are 142 political parties — instead of the main two in America.

“We were surprised how fast results were published,” Kyryliuk said via e-mail. “In Ukraine, it usually takes a couple of days to find out.”

All four scholars are in the process of writing up a final report of their activities from this past semester. Some, such as Yatsenko, are also in the process of working on academic papers with Moore, Joe Parcell, department chair of agricultural and applied economics and MFA Professor of Agribusiness; and Harvey James, professor of agricultural and applied economics.

If all goes as planned, Schneeberger, Meyers and other members of the CIP staff hope to be able to host another group from Ukraine in the fall of 2017 and the fall of 2018. The CIP is currently working on establishing Memoranda of Understanding (MOUs) with all three institutions the scholars represented. In addition, Schneeberger and Meyers will visit all four scholars in Kiev and Zytomyr in April, where they will get to experience Easter weekend in Ukraine “which apparently is very different from the U.S.,” Schneeberger said.

It is very common for people to spend the eve of Easter — called Velykden in Ukraine, or “The Great Day” — in Church services and then celebrate with a special meal that features a kind of Easter bread called Paskha, said Cherniavska, who added that Easter celebrations often extend into the next week. 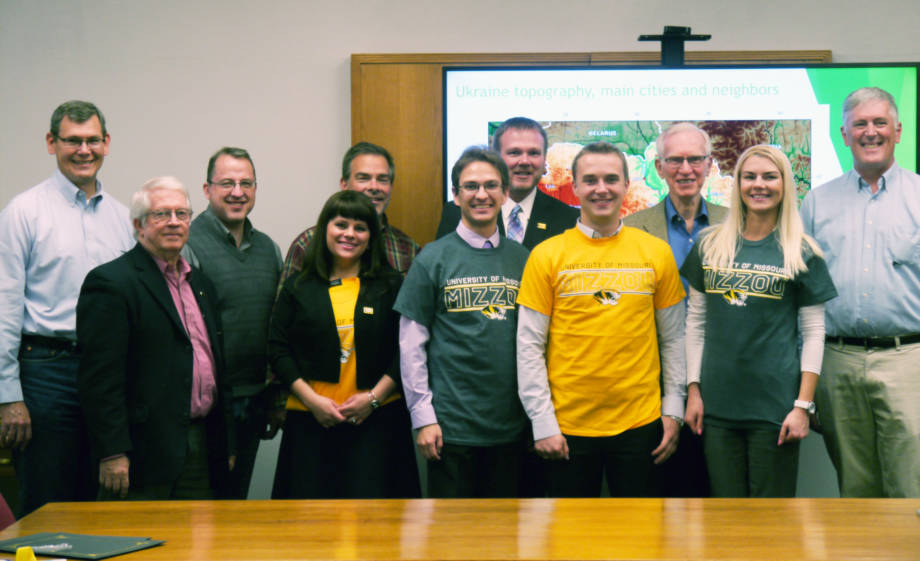