The Jefferson Farm and Garden movable high tunnel will be… Expand ▸

The University of Missouri College of Agriculture, Food and Natural Resources’ Agricultural Research Centers are no stranger to high tunnels, also known as hoop houses.

High tunnels are unheated greenhouses designed to extend the growing season for landowners and maximize their profits. They come in a variety of sizes, with a focus on aiding fruit and vegetable crop production in a way that is economical.

The Bradford Research Center in Columbia, Mo., has had high tunnels since 2001. The Center has a total of eight high tunnels and grows a variety of fruits and vegetables, including tomatoes, raspberries, lettuce, broccoli and cabbage.

Two more Research Centers will add high tunnels in 2017 – South Farm and Jefferson Farm and Garden, both located in Columbia.

The two new high tunnels will be used for different purposes. Jefferson Farm and Garden’s tunnel will be used for educational purposes, while South Farm will conduct more research with its tunnel. These tunnels are movable and can be used during all four seasons, allowing for research to be conducted throughout the year. 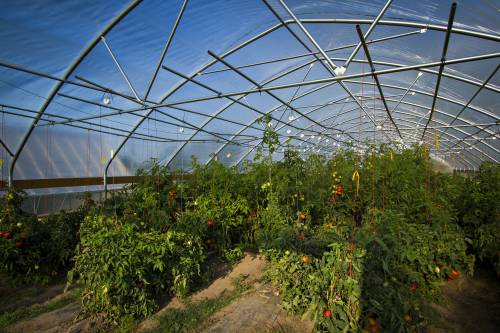 High tunnels are unheated greenhouses designed to extend the growing season for landowners and maximize their profits. Photo by Kyle Spradley.

“There’s a big benefit to extending the growing season,” said Tim Reinbott, superintendent of the South Farm Research Center and Director of Field Operations for the Agricultural Experiment Station. “We’ve learned a lot about high tunnels at Bradford, and we’re excited to add two movable tunnels at other Research Centers.”

The movable high tunnels at Jefferson Farm and Garden and South Farm are the result of a grant from the Missouri Department of Agriculture. The grant is focused on researching ways to protect raspberries against the spotted wing drosophila, also known as a vinegar fly, which is a common pest.

Research will also be done on other plants as part of the grant.

“We will use the tunnel at three different locations – for tomatoes in the spring and early summer, raspberries in the summer and early fall, and then cold crops such as lettuce in the late fall and winter,” Reinbott said.

Reinbott, who served as the superintendent at Bradford from 2000-2015, said high tunnels have become more popular during the past 10 to 15 years.

“The high tunnels at Bradford were the first in Missouri,” Reinbott said. “Farmers adopted them extremely quickly – before we could even finish conducting research on them.”

The tunnels generally have some sort of plastic covering. The covering protects the plants from frost and other cold-weather happenings during the winter months and the scorching heat during the summer months.

“The high tunnels protect the plants in many different ways,” Reinbott said. “You obviously can’t plant lettuce, for example, when there’s snow on the ground. However, with these tunnels, they have the correct environment to plant that lettuce during the winter months.”

While the tunnels don’t need to be located near a power source, it is still suggested that it be located where a landowner can check it regularly. Landowners should also take the availability of sunlight and wind direction into account.

Reinbott added that high tunnels normally produce a higher quality fruit or vegetable since rainfall can oftentimes hurt the quality of the product. Individuals can also put screens around the fruits or vegetables to protect them from pests. Reinbott said they will be using screens on the raspberries as part of their research.

Reinbott is hoping the two new movable high tunnels can be expanded to more projects as well. He is hoping to add flowers to mix.

“I really think we could plant cut flowers, whether they be perennials or annuals,” he said. “It’s just another way to put the tunnels to use.”