Students and visitors alike watch one of the video projects… Expand ▸

Although she had never worked on a video project like this before, Tamar Crum was well aware of the message her team was trying to convey. It was very similar to the one she and her family would use when exhibiting cattle at the Illinois State Fair — although she had much more than 90 seconds to get her message across.

It was there at the fair “where people really don’t know what we do or why we do it, so having that skill from the get-go has always been important for my family to explain why we do what we do,” said Crum, who grew up near Springfield, Illinois.

As part of assignment in the Preparing Tomorrow’s Leaders of Science (PTLS) class, Crum and her classmates were challenged to produce a video in four weeks’ time geared toward the general public that would explain a relatively complex scientific concept in 90 seconds or less. The videos would then be shown to and judged by a panel of representatives from Monsanto.

“Ninety seconds isn’t very long to get a story across,” Crum said, “because we’re such scientific minds we have to remember who the audience we’re talking to is. We need to give them the facts, but also a broader picture of the facts and how it relates to the audience, which growing up in animal agriculture is something I’ve had to pick up anyways.” 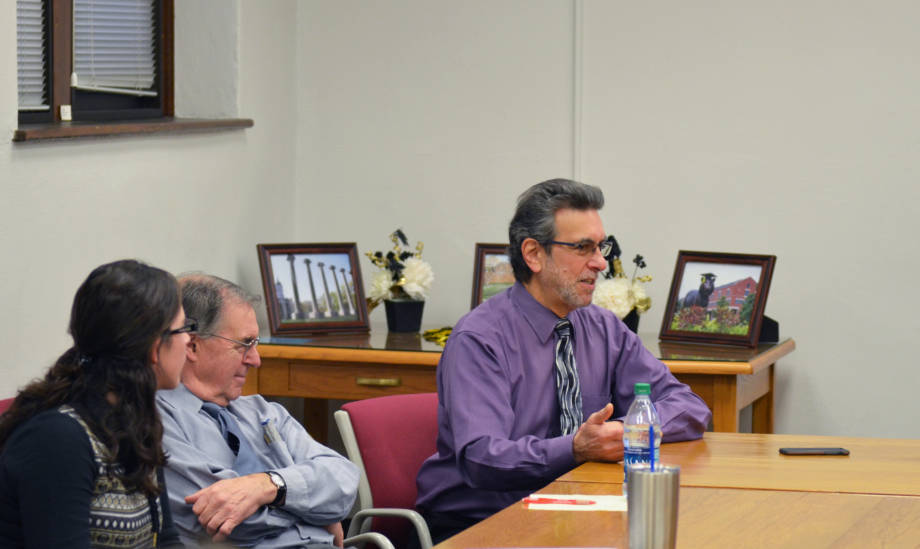 Crum’s group, a.k.a. “Team Rocket,” opted to do a video about GMO-based animal feed and its importance. Part of the video was filmed in a local grocery store, but the other half was filmed at the farm that Crum — who is a third-year doctoral student in the Division of Animal Sciences working in the lab of Jerry Taylor — and her husband currently tend to in Rushville, Illinois.

“We utilized that personal experience to establish credibility in our message,” said her teammate, Ben Julius, a graduate student in the Division of Biological Sciences in the College of Arts and Science, before the videos were shown for the first time in class on Dec. 6.

At one point in the video, a frolicking calf stole the show, eliciting laughter from the room.

Marc Linit, the interim dean and vice chancellor of the College of Agriculture, Food and Natural Resources, said that the video raises an important point in the GMO discussion: animal welfare.

“The video gave me a very positive reaction,” added Mike Chippendale, professor emeritus in the Division of Plant Sciences. “The general public sees the meat packaged in the supermarket and they don’t think much about the source so anything you can do to sort of show the connection, the pipeline is very helpful.” 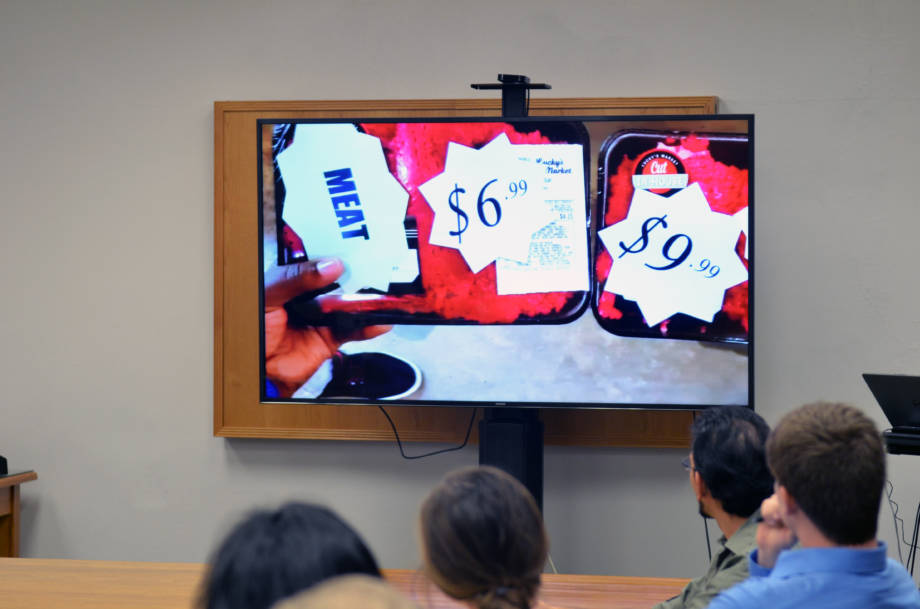 Linit and Chippendale were among those who provided critiques to the three groups. Before the groups presented the videos, Linit disclosed the fact that his wife, Sue Hollingsworth, has worked as a video producer for many years (and is currently the director of the Academic Support Center, which produces several videos of year) “so I’ve learned from my wife about production values.”

“I know from listening to my wife how difficult it is to get a message across in 90 seconds. You start off and you think 90 second is an eternity,” Linit would later tell the students. “How are we going to fill 90 seconds?

“And really there’s enough time to set it up and make a point and so at the end you have to look at each of the videos and say ‘OK, is the point we’re trying to make there?’ Is the audience walking away with that point? And it’s tricky. It’s really an art form. We all grow up watching commercials and that’s what that art form is, getting that take home message in 30 seconds or 60 seconds.”

Later on, the second group, named the “CRISPR Whispers,” showed its video, which explained how the highly complex CRISPR Cas9 gene editing system worked by use of a white-board and cartoon-like animations.

“I’ve looked at a number of articles in professional journals that didn’t do as good of a job explaining,” Chippendale said.

Linit liked the graphics as well.

“It makes the topic approachable and takes away that thought of ‘Oh, it’s science. I have to turn it off,’” he said.

This academic year marks the third year of the PTLS program, run and taught by Loriana Sekarski, president of BONSAI, a leadership coaching and advising company. The video assignment, though, was the first of its kind after Sekarski helped cultivate the idea with Jesus Madrazo, vice president of corporate engagement for Monsanto. 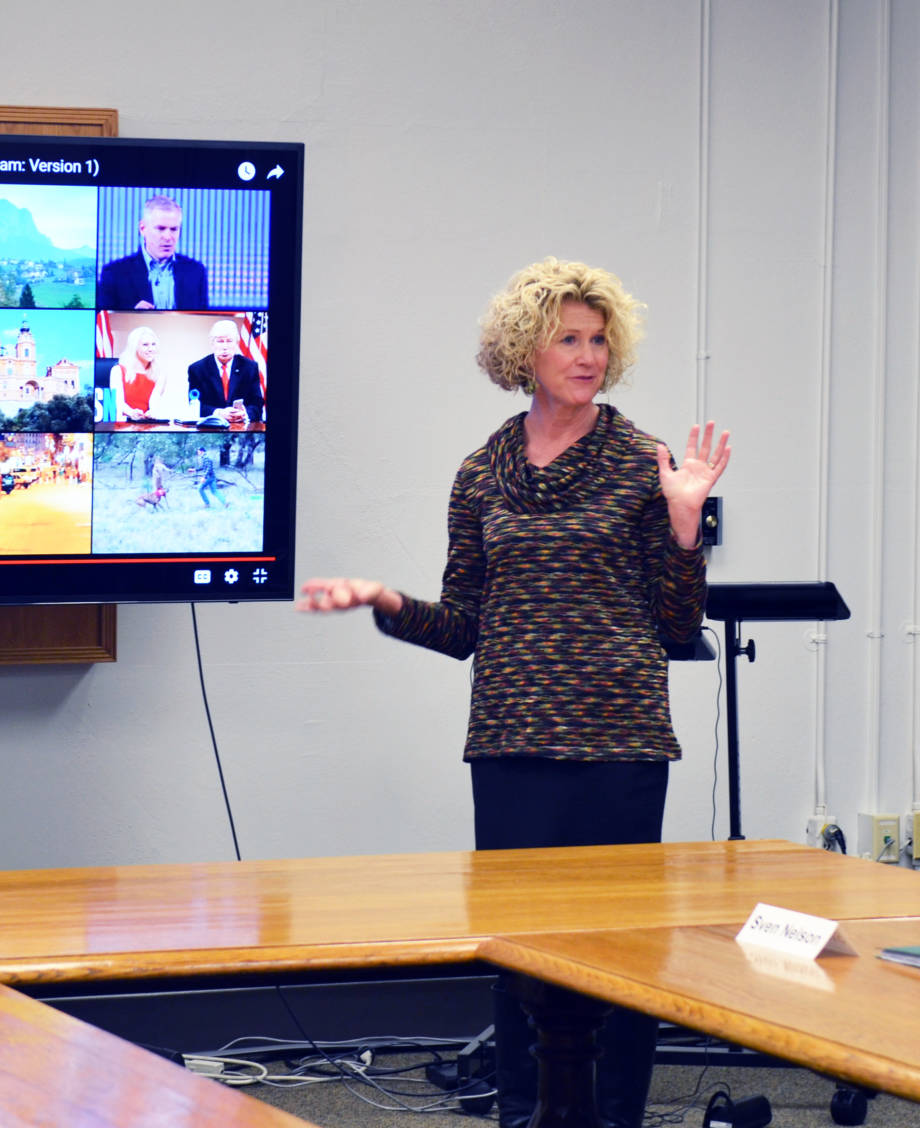 “We thought it would be a great way for students to communicate science to the public because we know that’s an important skill,” Sekarski said. “The goal of the project is to find the best way of communicating science to the public and getting the students engaged in activities where they have to work as a team and reach out to partners outside the university and produce a deliverable.

“The greatest learning, I believe, was in the interaction of facilitating a difficult project in a very short time frame and producing an end result.”

The video project also represented a good opportunity to take advantage of the expanding diversity of perspectives that the PTLS has enjoyed this year. When the program started in the fall of 2014 as a way for graduate students in the hard sciences to hone their soft skills, the program had students from four disciplines: the divisions of plant sciences, bioengineering and biochemistry and biological sciences. Last year, the class had a nuclear engineering student.

This year, the class has added students from CAFNR’s Division of Animal Sciences, mathematics (COAS), computer science (College of Engineering) and strategic communication (School of Journalism).

“Those are all disciplines that are critical in the life sciences industry,” Sekarski said.

Beverly Agtuca is a third year doctoral student in the plant breeding, genetic and genomics program in plant sciences working in the laboratory of Gary Stacey, MSMC Endowed Professor of Soybean Biotechnology.

“I learned how to work collaboratively with my colleagues at a faster pace,” said Agtuca, who had some experience with video projects, but with a much more generous deadline. “Ninety seconds is a very short time to convey the complexity of agricultural production and its impact, both positive and negative. However, if this video stimulates the discussion on these subjects and stimulates people to learn more, then it will have served a very important function.” 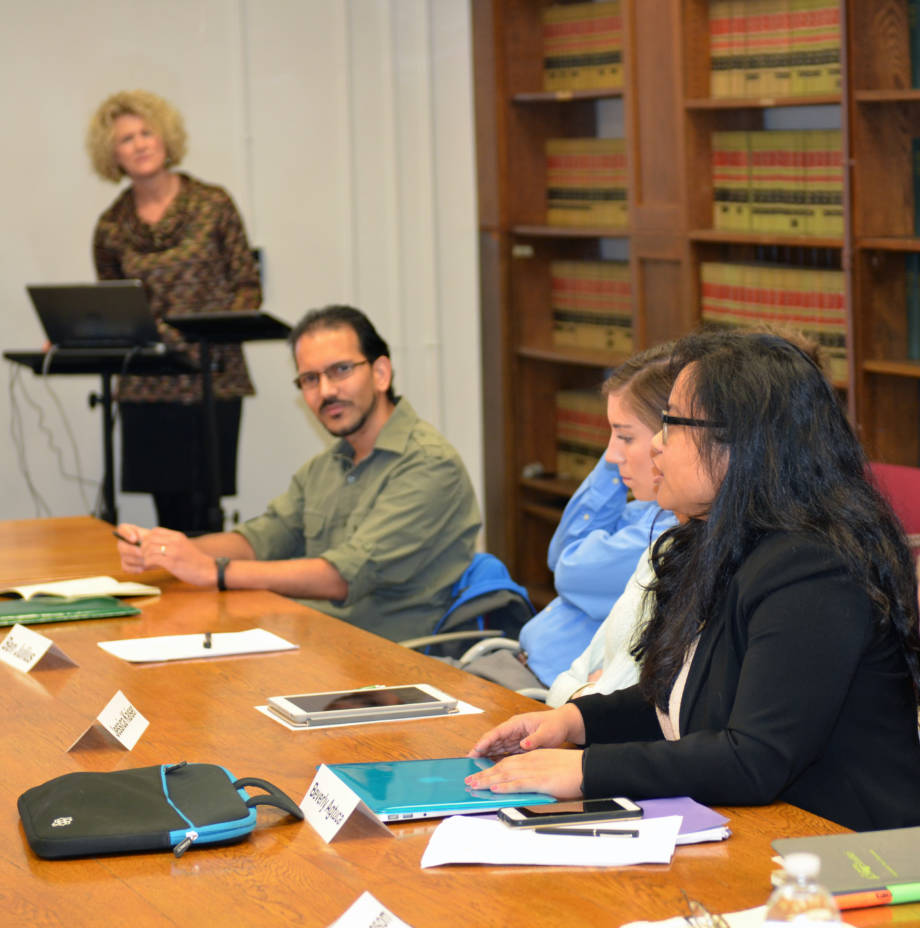 She came up with the idea that her group, a.k.a. “The A Team,” would later go with for its video: the possible positive benefits of having microbes. specifically nitrogen-fixing bacteria, serve in the same capacity as traditional fertilizers can minus the harmful chemicals. The subject matter happens to be the focus of Agtuca’s dissertation, so she had plenty of scientific information when the group first began its discussion about a direction for the video. Then a classmate of hers in strategic communications, Jessica Kaiser, immediately offered a different point of view, which Agtuca appreciated.

“I said a statement about the science facts and Jessica said, ‘Who cares about that? We need to do know more about the problem of the science and the purpose of it,” Agtuca said.

Agtuca had been recommended to PTLS by Jim Schoelz, professor of plant sciences. Crum became the first student from animal sciences to the program after being encouraged to apply by Tom McFadden, a professor in the division who is also its former director. She is grateful for his encouragement.

“Being in animal science and a Ph.D. you kind of find your little area and don’t really venture to far from it,” Crum said, “so it’s been great to know people outside my department. You have a group of people who are going through the same processes as you are and you can bounce ideas off of them and learn from them and their experiences. I’m there during the week and then I go home on the weekend, so it’s been a great social aspect as well.”

The program, which takes place for two sessions (one in the fall and one in the spring), now has 23 alumni. Sekarski makes a point of engaging with all of them through regular emails that touch upon news and topics that relate to the workplace. In addition, she asks a group of students from the previous year to serve as mentors to the current class. The experience affords the mentors an opportunity to apply all that they have learned in class to be leaders in a different sense. 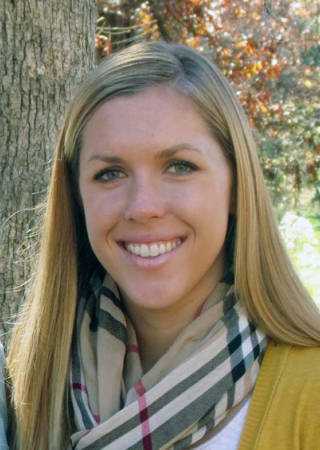 “You’re watching others come to decisions and grapple with problems and they are learning that delicate balance of when to step in, when to step back and how to facilitate and shepherd the group while letting them learn on their own,” Sekarski said.

Michelle Folta, who earned two degrees in plant sciences from MU (2011, B.S.; 2016, Ph.D.) served as a mentor last year after being in the first graduating class of the PTLS program. After working in the Plant Transformation Core Facility for Zhanyuan Zhang, she began working at Monsanto as a genome-editing scientist in August of 2016. She said the PTLS programming that she went through in 2014 had “helped me familiarize myself with the Monsanto culture and with the industry in general” after listening and speaking with the various guest speakers from the company.

“It let me know what skills in industry are really valued,” Folta said of her experience with PTLS. “Making a new transition to a job is going to always be uncomfortable, but it really helped me be more familiar about what it’s like in the industry. I felt like the first couple of months at my job went a lot smoother because I knew what to expect.”