The same words continually come up when those who knew Grace Hortense Greenley reflect on her life.

Miss Greenley served students for the majority of her life as a teacher and principal. She earned a reputation as a hardnosed, strict disciplinarian. A hidden sense of humor could be found underneath the tough exterior, though. 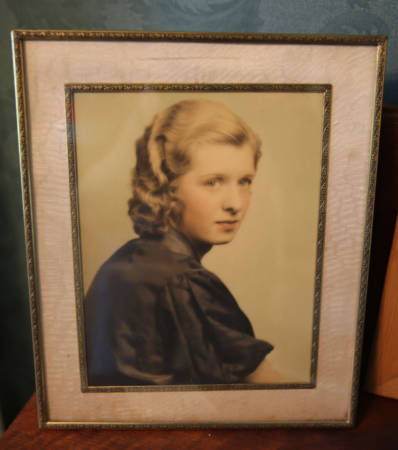 “When she lowered her voice, the students knew she meant business,” said Rosalyn Eyman, who taught at Knox County R-I High School while Miss Greenley was the principal. “The students knew not to disappoint her.

“Those same students had great admiration for her, though. She had a great sense of humor that really showed itself after her teaching career ended. She was such a great person.”

Those who knew Miss Greenley also discuss her generosity. Miss Greenley’s kindness has come in all forms, from gifts to scholarships to land. Her generous spirit wasn’t limited to one group, either. She donated to the University of Missouri College of Agriculture, Food and Natural Resources, Truman State University, the Knox County Nursing Home, and several other businesses and entities in the Knox County area.

Miss Greenley never let her wealth truly be known to those around her. She lived a very modest life.

Miss Greenley passed away in 2014, at the age of 96. Her life was full of accomplishments.

A Love of Education

Grace Hortense Greenley was born on Dec. 13, 1918, at the family farm northeast of Novelty, Mo. That farm was the family home until 1965, when her parents moved to Edina. Miss Greenley graduated from Novelty High School in 1936. An enthusiastic sports fan, Miss Greenley played basketball and softball and was a member of the track and field team while in high school and college. 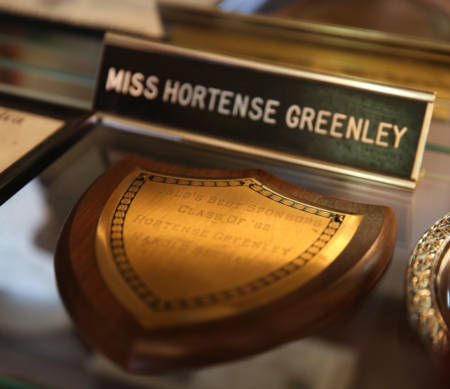 Miss Greenley served students as a teacher for 36 years at various schools.

In 1963, a new high school was developed, as the schools across Knox County decided to form a countywide school. The school, Knox County R-I High School, located in Edina, tabbed Miss Greenley as its first principal. She held that position for 13 years, until she retired in 1976.

Eyman taught art at Knox County R-I while Miss Greenley was the principal. The two worked together for five years.

“She was such a delightful person,” Eyman said. “I was honored to know her and to have been able to work with her.”

Lynn Bradley, office admin at the Greenley Research Center in Novelty and Eyman’s daughter, was a student at Knox County R-I while Miss Greenley was the principal.

“She commanded respect,” Bradley said. “There were no shenanigans. She ran a tight ship, but while Miss Greenley was firm, she was also very fair.”

A Love of Agriculture 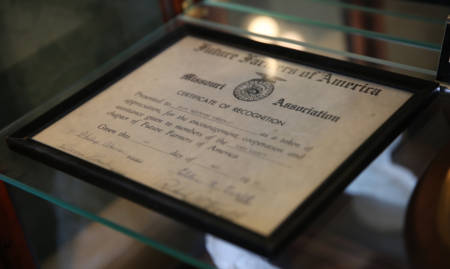 Miss Greenley was a strong supporter of agriculture throughout her life.

The land where the Greenley Research Center sits was donated to MU by Miss Greenley in 1969 in honor of her father, Lee Greenley Jr. Miss Greenley helped revive several buildings and structures on the site as well, including remodels of the farmhouse, built in the 1850s, that now serves as the Center’s office and the barn where each Field Day ceremony is held.

Miss Greenley was a strong supporter of agriculture, even working three summers in the Knox County Agricultural office while she was in college.

Her first donation led to numerous others. In total, Miss Greenley has donated nearly $5 million to CAFNR in a variety of ways – a number she wouldn’t even want to talk about.

“If she were alive, I don’t think she would let us do this story,” Bradley said. “She didn’t want any attention focused on her generosity.”

A large portion of her gifts have come in the form of land. Miss Greenley left another 240 acres to MU and the Greenley Research Center this year. That land will allow Greenley to begin a large-scale drainage and subirrigation project, an area where the Center is looked to as an innovator.

“A lot of our drainage and subirrigation work is done on small plots currently,” Greenley Superintendent Dana Harder said. “This gift of land will allow us to scale this project up to a very large degree. We’re very appreciative.”

Miss Greenley continued to be a big part of the Greenley Research Center throughout her life.

“She knew everything that was happening or going to happen at the Center,” Harder said. “She was heavily invested in what we were doing. Miss Greenley played a big role in its development and was also present at our Field Days, meetings and other events.” 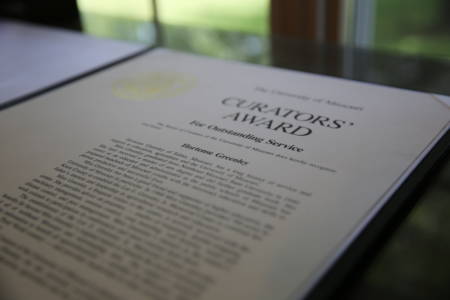 The Curators’ Award was given to Miss Greenley by the University of Missouri for her dedication to education and agriculture.

Miss Greenley was involved in the interview process when Harder was hired to take the superintendent role at the Research Center in 2014.

At last year’s Field Day, Harder and the team at Greenley wanted to find a way to show their admiration for Miss Greenley. The Center dedicated its newly constructed bridge in Miss Greenley’s honor. The group also unveiled a new sign for the Hortense Greenley Agronomy Building, a building Miss Greenley had a hand in supporting that was named in her honor.

“She was very generous,” Harder said. “Miss Greenley dedicated the two farms in honor of her parents, and it was important to recognize her generosity and commitment to agricultural research in northeast Missouri.”

Miss Greenley received the Curator’s Award from MU for her support of education and agriculture. She was also elected as an honorary agriculture alumnus of Mizzou. She was a charter member of the Monticello Society and the Jefferson Club.

Darcy Wells, senior executive director for advancement for CAFNR, first met Miss Greenley in 2003. Over the next decade, the two had lively conversations whenever they could.

“That first meeting in 2003 lasted seven hours, during which we toured every inch of the Greenley Research Center in her pickup truck,” Wells said. “We consumed several cans of Mountain Dew during that meeting. Miss Greenley was generous with her time and loved to share stories about growing up on the farm, her parents, her former students, her community, and occasionally, her politics. I was blessed to have many more lively conversations with her over the next 11 years.”

A Love of Giving

Miss Greenley became a resident of the Knox County Nursing Home in 2010, where Tim Schrage serves as the administrator. Miss Greenley had served as the principal when Schrage’s brothers were in school, but he never experienced high school under her leadership. 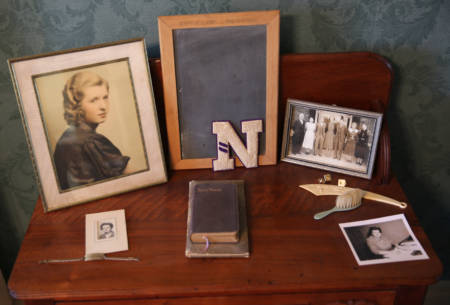 The Greenley Research Center in Novelty, Mo., has numerous pictures and awards displaying the life of Miss Hortense Greenley.

“My older brothers were a little ornery,” Schrage said. “I remember going down and introducing myself to Miss Greenley when she first moved in. I was a little nervous because I knew my brothers had probably spent a lot of time in her office. We had a good laugh about them and a great friendship really began.”

Schrage said that Miss Greenley loved watching ESPN. A problem popped up, though, when a local cable company went out of business. The cable system in the resident’s rooms changed and ESPN was too expensive to offer.

“I remember having to tell her about that,” Schrage said. “I really didn’t want to do it. She was disappointed because she really loved her sports, especially basketball.”

“She was doing really well at that time and showing improvements,” Schrage said. “We called Darcy and took a trip to Columbia. We ended up doing that two or three more times. She really, really enjoyed that.”

While Miss Greenley could have afforded to have ESPN beamed straight into her room, Schrage said she never complained about not having the channel.

“She didn’t want to have perks or stand out in any way,” he said. 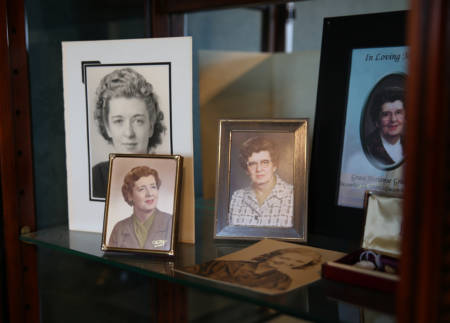 The Greenley Research Center in Novelty, Mo., has numerous pictures and awards displaying the life of Miss Hortense Greenley.

Miss Greenley left the Knox County Nursing Home a sizable gift as well. That gift is going to renovations, including an independent living building.

“Her gift to us is amazing,” Schrage said. “We’ll be able to do a lot of good with it. We can now move forward with our plans.”

Bradley was able to develop a relationship with Miss Greenley while she lived at the nursing home as well. Bradley serves on the board and got to know Miss Greenley in a deeper way.

“I was so grateful that I was able to form a relationship with Miss Greenley later in life,” Bradley said. “I was able to get to know her as a person, not as a principal. She still made me want to sit up straight in my chair, though.”

Along with gifts to CAFNR, Miss Greenley donated nearly $200,000 to the MU School of Medicine. She also made a legacy gift of nearly $1.2 million to Truman State University, which has led to the Grace Hortense Greenley Scholarship.

“Now that some of these gifts have come out, I do think people are a little surprised,” Harder said. “She has certainly left a lasting legacy.”