Every year in October CAFNR brings together scholarship donors with the recipients so they can visit over a relaxed meal. On Oct. 26, nearly 200 gathered in the Reynolds Alumni Center for the Scholarship Donor Recognition Dinner. Carley Esser, Student Development Board member and junior agricultural education and leadership major, served as master of ceremonies. She recognized the donors in the audience representing 49 CAFNR scholarships.

Julia Brose, a junior in biochemistry from Wildwood, Missouri, served as the guest speaker. She recounted her recent experience being notified that she had received a scholarship. She said her excitement was over the top. Not only was she being recognized for her hard work, but she would be the first recipient of the Dr. George Garner Scholarship in CAFNR and it was going to be a surprise to the donor at the upcoming Biochemistry 40th anniversary event.

“When I received the Garner Scholarship it was especially exciting because I am the first recipient of this award and it coincided with a large celebration in the Biochemistry department,” Julia said. “The donors did not know that a student had been selected for the scholarship, and I was able to surprise them as the scholarship was announced to the department.”

Are you interested in endowing a scholarship fund or supporting scholarships? Give today!

After the initial excitement died down, she said she realized she needed to reexamine her goals for the coming years. Now that she didn’t have to work as much to meet expenses, she would have more time to delve into experiences inside and outside of the classroom. She would have more time to devote to her research passions, and to her positions of vice president of the Biochemistry club and treasurer of the Society of Undergraduate Researchers in the Life Sciences. 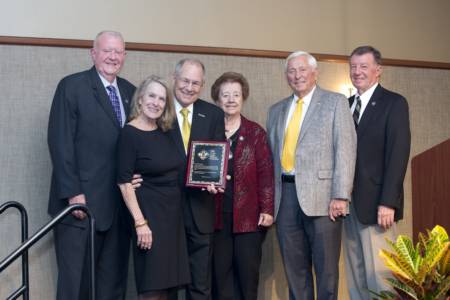 “As donors you allow me and students throughout CAFNR to align our interests with our dreams,” she said.

Julia noted the time she devotes to student organizations and giving advice to her younger counterparts is her way to give back now. In the future, Julia fully plans to give back through scholarships.

“As donors you set an example of giving back to the MU community that inspires us, the recipients, to give back like you have. My hope and goal of the future is to be able to give back to MU as much as you have and to one day be sitting in the audience as a scholarship donor supporting the next generation.”

Following Julia’s talk and unbeknownst to CAFNR Dean Tom Payne, Litton Family Foundation members Bill Jackson, Lowell Mohler, Bonnie Mitchell and Ed Turner honored the dean in a very special way. Turner spoke, summing up Dean Payne’s commitment to the Litton Foundation, his vision of the Litton Scholars Program and many other ways in which he’s exemplified Jerry Litton’s values throughout the years as Vice Chancellor and Dean of CAFNR. Mitchell presented Payne with a plaque and pin inducting him as an honorary Litton Family Foundation Board member (adding that he will be expected to attend board meetings).