The vineyard at the Southwest Research Center in Mt. Vernon,… Expand ▸

Anthony Peccoux spent eight months as the leader of the viticulture area in the wine and grape program at the University of Missouri College of Agriculture, Food and Natural Resources before he tragically passed away in 2012.

Peccoux made the most out of his time at Mizzou, connecting individuals in the grape and wine industry across Missouri.

Allison Miller, an evolutionary biologist at Saint Louis University, was one of the individuals who benefited from Peccoux’s desire to build relationships. Miller is now leading a team made up of several of those contacts.

Saint Louis University was awarded a $4.6 million grant by the National Science Foundation to take a deeper look at how the root systems of grapevines affect the vine’s stems, leaves and fruits. It will be a five-year project. 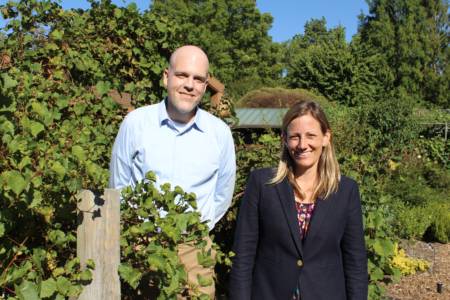 “Anthony’s goal was to build a community of researchers and bring us together,” Miller said. “It was through his efforts that a lot of this team met. He helped connect us and it’s so exciting to be able to study rootstocks and their effects on scions with this great group.”

The team is made up of several Missouri-based researchers. MU Assistant Research Professor Misha Kwasniewski, who works with the MU Grape and Wine Institute, will play an important role in the grant. Kwasniewski will serve as an analytical chemist during the project. His lab is equipped with the tools necessary to do much of the phenotyping involved in the project.

Kwasniewski has also been conducting research at the vineyard at the Southwest Research Center in Mt. Vernon, Mo. That vineyard, which has been paid for and managed by CAFNR and GWI funds, will be one of the primary sites of the research as well. That management has paid dividends, as the vineyard at Southwest was key to the project being developed.

“We’re very fortunate to have Misha on board,” Miller said. “His research has given us a great start to this project.

“We’re also thrilled to have the vineyard at the Southwest Research Center. Without it, we couldn’t have developed this project.”

Miller also has a connection with Londo at the USDA. The two attended graduate school together at Washington University in St. Louis. They even shared an office while doing research.

“We have a terrific team,” Miller said. “It’s a group of hard workers and our skills really complement each other. I think we have all of our bases covered. It’s honestly a dream come true.”

Kwasniewski said traditional research on grapevines takes place primarily above the ground. There is limited research taking place on the roots of those horticultural crops.

“A lot of what we look at, especially for horticultural crops, is what’s above ground,” Kwasniewski said. “That’s easy to measure. There are a lot of ways to test it without breaking things down. 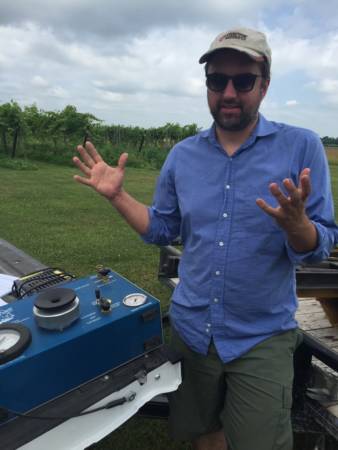 “There is a lot more happening under the ground than we even understand at this point, though. Even in a simple plant, where the roots are the same, there are a lot of interactions going on back and forth.”

The focus of this specific project is to research the rootstocks of the grapevines, with a goal of improving and adapting the rootstocks for the changing climate, as well as learning more about the functions of the rootstocks in relation to scions. Miller said the majority of rootstocks that are used in grape growing come from species found in Missouri and other parts of North America. She added that those roots have great potential to adapt grapevines for the ever-changing climate.

“There are eight species of grapevines in Missouri, 19 different species in North America and 60 globally,” Miller said. “There is certainly an economic importance there. We’re taking a look at the rootstocks of grapevines, how different rootstocks affect the top part of the plant, and how different environments influence interaction among the root system and the shoot system of grafted grapevines. We feel that there is unknown potential there.

“We’re just building on the work that has been done before us. We’re grateful for the opportunity.”

Grafting, which is commonly used commercially, will be the main method used to understand the rootstocks’ effects on the grapevines’ scion traits. Those traits include vine physiology, leaf shape and features of the fruit. Grafting is the process of joining the scion on to the rootstock. The rootstock is the actual root system and the scion is the fruit-bearing part above ground, with both coming from a different genetic background.

“We’re researching how plants adapt to changing environments, from a root system point-of-view,” Kwasniewski said. “We know that there are huge differences. We want to study how that happens.”

Kwasniewski said that the scion is the portion that most consumers are most familiar with, such as a Merlot scion producing Merlot fruit or a Norton scion producing Norton fruit. Grafting any of the scions to a rootstock will still produce that type of fruit; however, due to the complex interactions that the team is trying to understand, the scions will grow and produce fruit with subtle differences depending on the rootstock.

By learning more about the rootstocks of grapevines, the team is hoping to gain an understanding of what makes certain grapevines work in certain conditions – and if those specific rootstocks can be adapted to other conditions.

“Up to this point, we haven’t dove into the complex, metabolic signaling going on between the roots and the scions,” Kwasniewski said. “I’ve done bits of this type of research, but nothing this in-depth. There are a lot of different reasons as to why you would want a certain root system in a certain area.”

Kwasniewski said that there are three sub-projects within the main project. 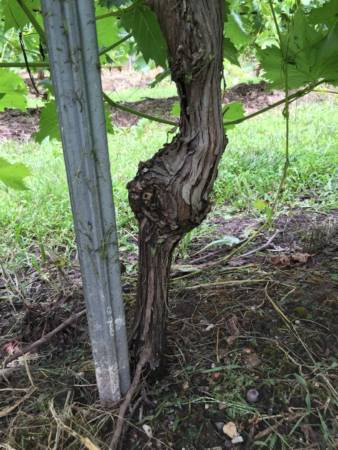 The first sub-project will focus on gathering as much data as possible. The team will travel to the Southwest Research Center next spring and will measure and sample nearly everything they can. Kwasniewski said his group at MU will look conduct metabolite analysis, where they will study the chemicals important to growth, vine health and flavor in the grapevines and in the fruit. They will also look at plant growth and take physiology measurements. Photosynthesis rates and the amount of water stress the plant is under will also be collected.

The group will freeze samples for RNA analysis. Miller will also dive deep into the leaf morphology and do an elemental analysis.

“We’ll do these same tests for three years at the Southwest Research Center,” Kwasniewski said. “We’re measuring absolutely everything that we can. The goal is to paint a picture of how the root systems actually impact what’s happening with the different factors we’ve measured. It’s quite complex.”

It was important to have a vineyard already in place with data connected to it. That’s why the vineyard in Mt. Vernon was so key. Kwasniewski already has three years of information collected.

“When you’re dealing with horticultural crops, it’s really different than something that’s an annual crop,” Kwasniewski said. “You have to have it in the ground. You have to have it established and ready for when a big grant like this comes around. The reviewers were really excited that we already have a research vineyard that is perfect for this type of work. We don’t have to wait six years for the site to mature and prove that we could maybe get something out of it. It’s ready to go.

“The funding agency wants to know that the project is going to happen. If you’re saying you think you’ll be able to do it five years from now, that’s a challenge. We already have preliminary data from work Allison and I have done.”

Kwasniewski added that they are currently looking to add a second vineyard to the project, either at Southwest or at the South Farm Research Center in Columbia, Mo.

The second sub-project will begin in January. This project is in close collaboration with the USDA with the researchers planting grapevines in Missouri, New York, South Dakota and California. 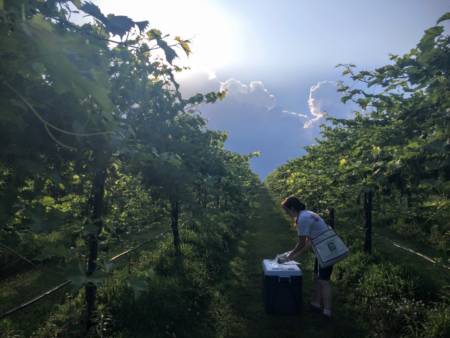 “With the USDA, we have a breeding population of different rootstocks that we’re going to plant with the same scion at four or five different sites,” Kwasniewski said. “The USDA already has these vines grown out and they are mature. We’ll take cuttings of those and graft the scion onto it. We’ll plant them during the 2018 season and gather the same measurements as with the first sub-project. With the different sites, we’ll see a huge increase in genetic diversity.”

The third sub-project will take place in California vineyards with the collaboration of the E. & J. Gallo Winery. The family-owned E. & J. Gallo Winery is forward thinking according to Kwasniewski, with a focus on the next generation of grapevines. The team will look at the differences in the rootstocks in different regions and their impacts on the metabolites.

“The focus here is to get a better grasp of the regional differences,” Kwasniewski said.

With plenty of research and work ahead, the team is currently gearing up for the project.

“It’s great to be able to collaborate with so many others, especially with several Missouri-based colleagues,” Kwasniewski said. “We’re in a great place here in Missouri. This team came together in the exact way you would want it to.

“It’s also exciting for the MU Grape and Wine Institute. We’ve worked hard to make ourselves available to joint projects like this.”