Mike Baumgartner has always enjoyed being around horses.

That interest sparked others, including a jump into the rodeo world. Baumgartner has been involved in various rodeo events since his high school years. His most recent trek has been into team roping.

Team roping pairs two individuals together – a header and a heeler. Each sit on a horse parallel to one another, with a chute between them. The chute holds a steer that is released for the two individuals to rope. The header’s job is to rope the steer’s horns and turn him to the left. The heeler’s job is to rope the steer’s back hooves. The header makes a move first, with the heeler throwing their rope second. Once the heeler ties the back hooves and turns and faces, time is called.

“The camaraderie within rodeo is great,” Baumgartner said. “The competition is a lot of fun. I didn’t play football or baseball in high school. Rodeo was my sport and where I competed.”

Baumgartner, the construction supervisor at the South Farm Research Center in Columbia, Mo., has tried a handful of other rodeo events. Early in his career, he participated in bronc riding and attempted to ride bulls. 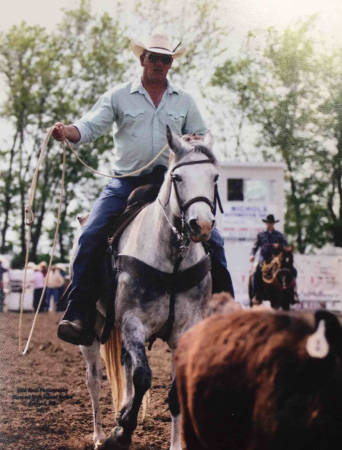 “I wasn’t very handy at either,” Baumgartner said.

Baumgartner raised and leased bucking horses for the Missouri Rodeo Cowboy Association as well. He continued working with the MRCA and soon became a pickup man vital to the safety of certain events.

Baumgartner retired as a pickup man around 10 years ago. He recently began his competitive team roping career after spending the last few years practicing. He bought a horse in July for competitions. Baumgartner now has four horses, the first three of which he trained himself.

“I bought a finished horse this time around,” Baumgartner said. “You really don’t want to have to teach a horse while you’re learning as well. One of you needs to know what’s going on. Having a good horse is the key element to roping. A lot of people can rope, but having a horse that is compatible with you is going to help you win. That compatibility is key, too. You have to find a good fit.

“It’s all about the horse power.”

Each roper is given a number for competition purposes. Baumgartner is a No. 4 header, a number generally assigned to a beginner.

“The numbers are given so you don’t have to compete against professionals who will take your money every time,” Baumgartner said. “For example, if you’re competing in a No. 9 team roping event, and I’m a No. 4 header, I’ll be paired with a No. 5 heeler. I couldn’t be paired with a No. 6 heeler because our numbers together would be higher than nine.”

Some team ropers have had their team together for an extended period of time. Baumgartner doesn’t currently have a roper he rides with at each event, since he just began competing.

“It obviously helps if you rope with the same person often,” Baumgartner said. “You’ll know each other’s tendencies better. I’ve roped with several different people. If you go to a competition and you don’t know anyone, they have a draw pot. Usually, you can enter up to three times and they’ll draw three partners. I’ll be paired with one of them and compete.”

Baumgartner practices roping across the mid-Missouri area. He’s been to Hallsville and Boonville.

“There is a barn in both locations where you can practice,” Baumgartner said. “A lot of people also have a pin and a few steers. It’s really about who you get to know and who will let you come out and practice.”

Baumgartner went to high school in Fulton. His sons has also been involved in rodeo as well.

“For several summers we were at a rodeo every weekend, up to 15 weeks in a row,” Baumgartner said. “We had a horse trailer and a camper. Getting to camp with my kids every weekend was a ton of fun. I also knew where they were every Friday and Saturday night for a long time. I really feel that rodeo gave them a good foundation.”

Baumgartner has worked at the South Farm Research Center for 21 years. He served as a building trade specialist for the majority of that time, recently being promoted to the construction supervisor position.

“I took the job at South Farm thinking it would be a good place to work one winter,” Baumgartner said. “And 21 years later, here I am.”

The construction crew does various jobs at all of the University of Missouri College of Agriculture, Food and Natural Resources’ Agricultural Research Centers. The crew builds sheds, does tile and concrete work, puts in stanchions and even puts up window blinds. They’ve built drought simulators at the Horticulture and Agroforestry Research Center in New Franklin and one at the Fisher Delta Research Center in Portageville as well.

“If you don’t like what you’re doing, just wait until the next week because it will change,” Baumgartner said. “We’ve got a really good crew out here at South Farm. It’s not just our crew, either. We have a fantastic group of workers and everyone out here is really good at what they do.”