Robert R. and Carol Reich had a simple goal in mind when they created the Robert O. Reich Family Executive-in-Residence Program in 1996 – bring industry professionals to the University of Missouri campus to interact with students and faculty.

Alvin McQuinn, President and CEO, Ag-Chem Equipment Co., Inc., kicked off the program in 1997. Missouri Department of Natural Resources Director Sara Parker Pauley served as the 50th executive this past October. In between, numerous CEOs and directors have shared their experiences on the MU campus with future leaders.

“I can’t believe it has been 20 years,” Carol Reich said. “Our focus has always been on giving students an opportunity to see what happens in the real world – not just in academia. When you’re in a classroom, you don’t know where you can go. This program gives students that opportunity and has had a wide variety of executives.”

Robert and Carol both grew up in Kanas City. Robert attended Central High School before getting a degree from Mizzou. Carol attended Southwest High School and went to Drury University before transferring to and graduating from the University of Kansas. Robert, who was part of the Alpha Gamma Sigma fraternity, graduated from MU in 1957 with a degree in agriculture.

“The Alpha Gamma Sigma fraternity – those were the nicest gentlemen,” Carol said. “They still are, too. Anytime I’m in Kansas City, Robert’s fraternity brothers still take me out to dinner.” 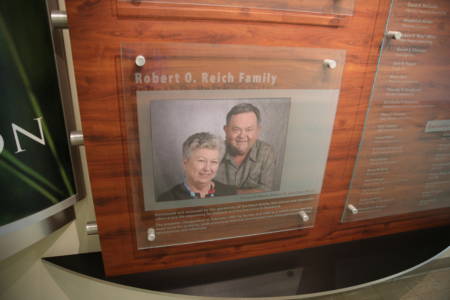 Carol graduated a year later with a nursing degree from KU. Carol went to work at the University of Kansas Medical Center, in the operating room.

“Mizzou didn’t have a nursing program in those days, so that’s how I wound up at KU,” Carol said. “I made $310 a month at UMKC. The extra $10 was because I took call. It was a little ridiculous.”

Four years later, Robert and Carol crossed paths for the first time. A secretary at the School of Nursing and Health Studies said Carol just had to meet the Reich boys.

Robert had eyes just for Carol, though.

“Steve went into the National Guard a little while later and he threw his black book at Robert,” Carol said. “He told them any of the names in there were fair game. Steve left on a Friday morning and Robert called me that night. We went out on Sunday. That was in April. We were engaged in August.”

“Robert was in the mushroom business, so we had to work a wedding in between the different crops,” Carol said.

Mizzou and Kansas have held a rivalry for many years; however, that competition never found its way into the Reich household.

Richard Maltsbarger discussed his career at Lowe’s while he was an executive in 2012. Maltsbarger has since created a scholarship for CAFNR students.

“It’s a rivalry, but we didn’t carry it too hard.”

While Robert and Carol may have had a few fun disagreements about their alma maters, giving back was one area where they completely agreed.

“At that time, we still loved Mizzou but had never really been called upon to have an active role,” Maltsbarger said. “We wanted to give back financially. Scholarships had a big impact for my wife and I and allowed us to attend Mizzou.

“Mizzou has a special place for us. We wanted to enable someone else to come to Mizzou.”

August Reich, Robert R.’s grandfather, settled near Kansas City in the late 19th Century, moving from Germany. August, along with his sons Walter, Bill and Robert O., Robert R.’s father, created A. Reich and Sons Gardens, Inc. Their business was focused on horticulture crops and served as a wholesale food supplier. The Reichs expanded their developments as well, developing the Blue Ridge Shopping Center and the Blue Ridge Bank and Trust.

It was Robert R.’s mother, Mildred, who first gave an endowment to MU in the form of a professorship. That endowment was later used to begin the Executive-in-Residence Program.

“Mildred knew that students can’t learn everything out of books,” Carol said. “You need to meet leaders. This was a wonderful way to do that.” 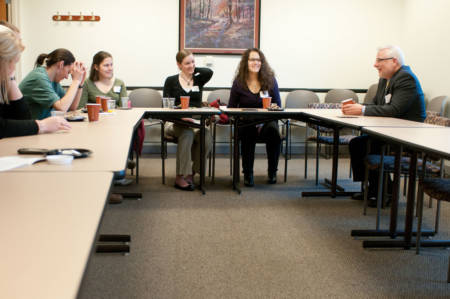 CAFNR has generally had two Executive-in-Residence speakers each year. Representatives from the Farm Journal, Monsanto, Dairy Farmers of America, Anheuser-Busch and The Hershey Company, among others, have interacted with CAFNR students over the years.

Robert and Carol worked with Roger Mitchell, who was the MU College of Agriculture, Food and Natural Resources dean at the time, when the program first began. Mitchell served as the dean until 1998. Tom Payne took over the dean duties in 1999.

“Roger thought the Executive-in-Residence program would be a great way to bridge the gap between industry leaders and students,” Carol said. “As soon as Tom came to Mizzou, he was really gung-ho for the program. It really took off and grew after that.”

The Executive-in-Residence Program has brought other opportunities and programs to the surface as well. The Professor-for-a-Day program was created in 2011 and also brings industry professionals to the Mizzou campus. Many of the professionals are MU alumni. Some of the endowment money has also been used for the Life Sciences Academy, a summer academy built for a high school students to learn more about agriculture, biotechnology and life sciences.

“The management has been great,” Carol said. “I’m so impressed with the way the University of Missouri has handled the money. Even in difficult times, they’ve had enough to have two Executive-in-Residence a year.

“We’ve had so much support because people are impressed with the students and with the professors.”