At the University of Missouri Equine Teaching Facility at the South Farm Research Center, it’s called “a horse fix.” That’s the term commonly associated with the reason students from many different academic pursuits (not just those studying animal science or veterinary medicine) often take a course like the senior-level equine behavior and training class in the Division of Animal Sciences that Natalie Duncan helps teach on Thursday afternoons.

Having arrived at MU with almost no large animal experience five years ago as a freshman in the division, Duncan volunteered at the horse farm in part to get her horse fix — and she has never been able to remove herself from the equine industry since.

“I volunteered out here and loved it,” Duncan says.

In addition to teaching the class as a fill-in instructor while facility supervisor and equine instructor Marci Crosby is out on maternity leave, Duncan also serves as one of two facility managers. In the summer of 2015, she began a three-year master’s program, in nutritional physiology, compared to the standard two-year format, to allow time for the day-to-day operations. At the moment, one of her primary duties is managing the upcoming 2016 Annual Horse Auction and Fundraiser, from Oct. 10 to Nov. 10. The sale’s preview will take place from 10 a.m. to  2 p.m. on Saturday, Nov. 5, at the facility.

Her other responsibilities include assisting in making management decisions regarding horse housing, nutrition and breeding; monitoring the general well-being of the horses; assisting the training of foals (a horse up to a year old) in the summer and working with two undergraduate student managers to ensure proper upkeep of the facility. Hannah Twenter serves as the co-facility manager while Crosby is on leave. 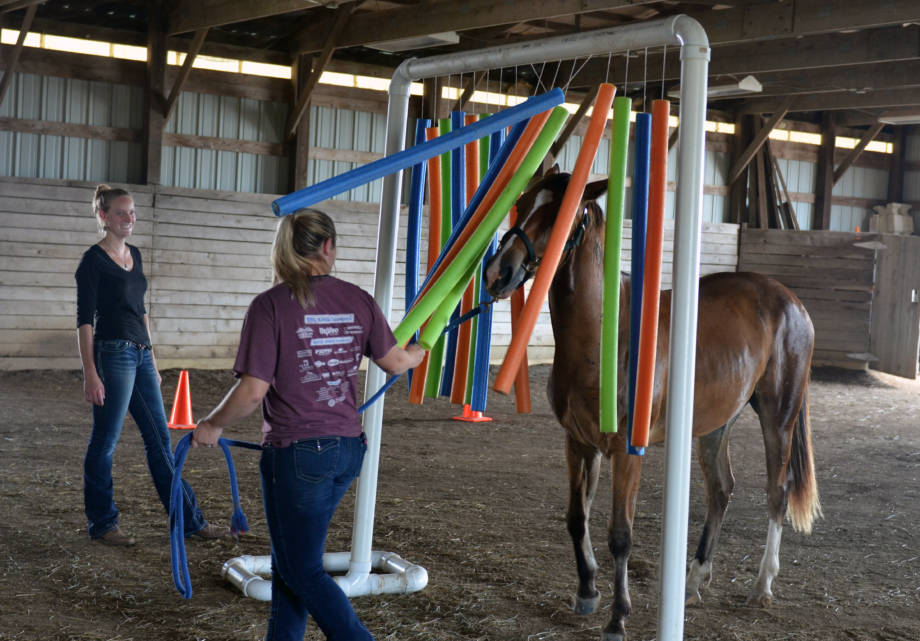 As the daughter of parents who both graduated from MU, Duncan chose to follow in her parents’ footsteps away from her their home in Leesburg, Va.

“I decided to carry on a tradition because the animal science program out here is impressive,” Duncan says.

After beginning her work in the equine teaching facility and then doing some volunteering at the Cedar Creek Therapeutic Riding Center in Columbia, Duncan went onto work for a couple of small barns in the Washington, D.C., area, where she had basic stall-cleaning duties. Duncan would later be a groom for a few show barns in Northern Virginia.

She realized, though, that she wanted to further her experiences by working at a larger farm that specialized in broodmares (mares used for breeding) and foals and being involved with both breeding and training. After going on the website of the Maryland Horse Breeders Association (MHBA), she found an ideal fit: Chanceland Farm. Located west of Baltimore, the farm had a very strong reputation in the industry with many prestigious bloodlines under its collective stable roofs. 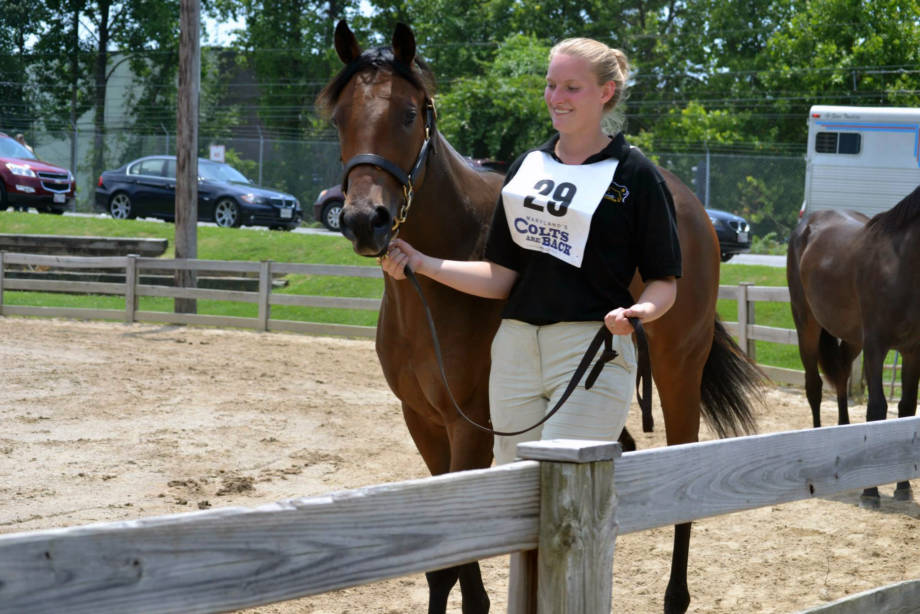 Natalie Duncan worked with horses from many famous bloodlines, including Cathryn Sophia (pictured) who won the 2016 Kentucky Oaks. Photo courtesy of Natalie Duncan.

After calling the farm manager, she eventually arranged to be the farm’s first summer intern in 2014 at the Chanceland Broodmare Barn, where her main responsibilities included the daily care and health monitoring of approximately 20 foals and 10 yearlings (horses between 1 and 2 years old).

The yearlings were being show-prepped for the big MHBA Yearling Show. Duncan worked with them on standing quietly, exhibiting the appropriate showing stance while walking them after daily baths. She also shadowed the veterinarian as he performed ultrasounds on pregnant mares, along with routine health care.

One of the lead caretakers at the Chanceland barn challenged Duncan to come out early to work for a couple of mornings and sit on a nearby fence. She wanted Duncan to observe the animals and make mental notes about which ones among them were dominant to help establish her own dominance in handling and training the more difficult yearlings.

“I really gained a good understanding of herd dynamics and behaviors,” Duncan says. “Then she worked with me on applying those to handling these colts myself.”

One of the yearlings she worked with would go on to be known as Cathryn Sophia, the winner of the 2016 Kentucky Oaks. At the time Duncan and others at Chanceland called her by another unofficial name given her temperament: Bossy.

“I never really thought about the fact that I might be working with a horse that some day might win a big race, so it was quite a surprise when I started seeing her name pop up,” Duncan says.

She ended up watching the big race, which always takes place the day before the Kentucky Derby, on her phone through Twitter posts at a barbecue event at the MU Equine Teaching Facility.

“All of the students were laughing at my hysterical excitement,” Duncan recalls.

She also worked with the sibling of a horse named International Star, who was scheduled to be in the 2015 Kentucky Derby. When she found out he had qualified, she made plans to watch the race in-person in Louisville — only to find out that he was a scratch on the morning of the race. That still worked out OK, though, as she saw American Pharaoh win the first part of the Triple Crown for the first time in 37 years. 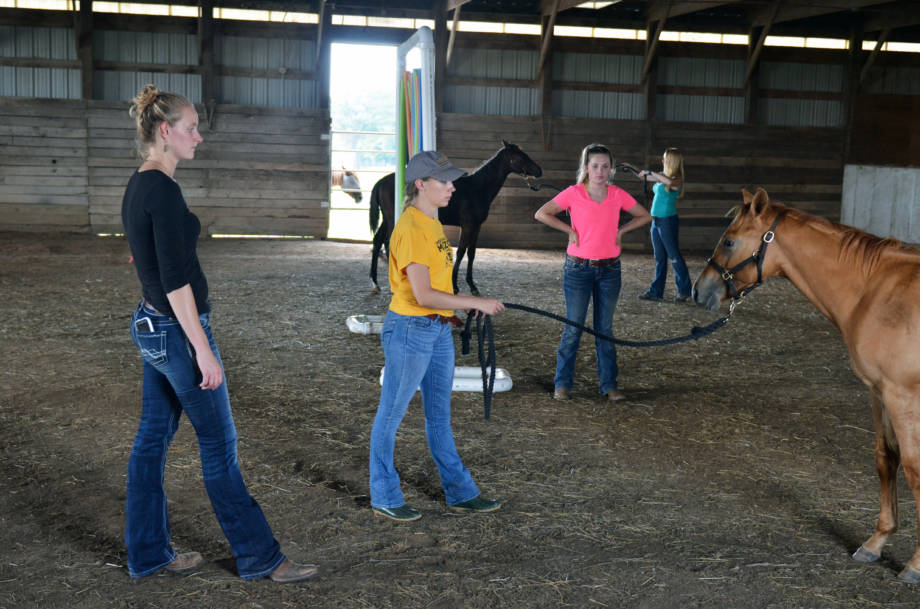 Duncan’s M.S. thesis will include research investigating the metabolite components and the blood chemistry of foals born at the MU Equine Teaching Facility. This is done by drawing blood samples at different hours of the first few days of their lives — thereby determining what is circulating in their blood metabolically as they transition from the womb to the outside world.

“What is surprising to us is that people don’t know as much as we assumed they did about what a normal foal should look like, and so it’s hard for us to really assess foal health or metabolism,” says Allison Meyer, assistant professor of animal science, who serves as Duncan’s graduate advisor. 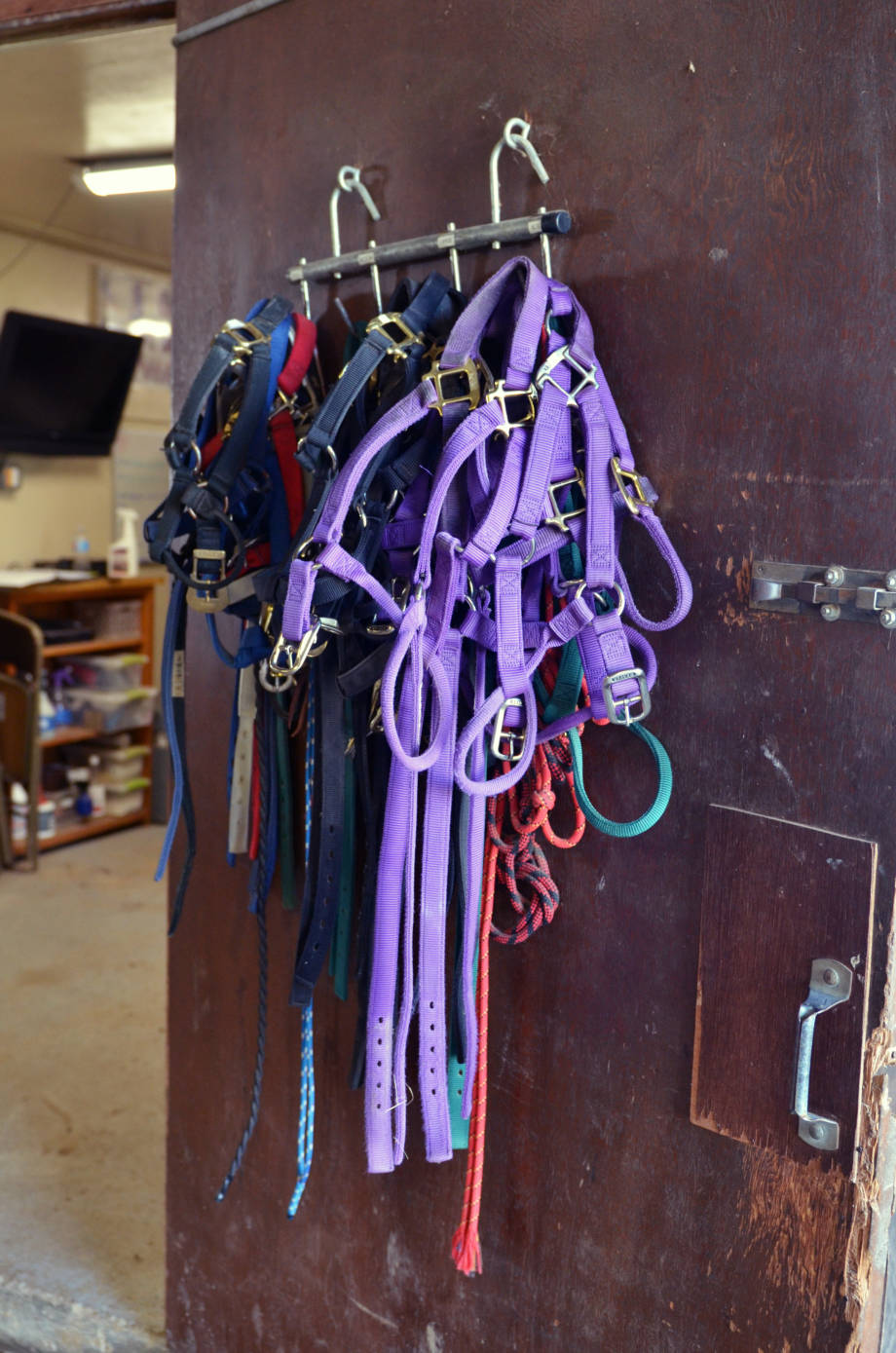 Colorful halters hang from a door at the MU Equine Teaching Facility.

Duncan took one of the classes taught by Meyer, who specializes in developmental programming of beef cattle, as an undergraduate. She is now expanding the Meyer Lab’s focus to include her work in foals, which is similar to other labmates’ work in calves.

“She’s a very detail-oriented student who is really inquisitive,” Meyer says of Duncan. “I think she has the heart of a scientist when it comes to reading and seeing things and being interested in why they happen.”

When Duncan first arrived at Mizzou, her initial plan was to be a sheep veterinarian and live in New Zealand. Duncan had visited New Zealand while her family lived in Alice Springs, Australia, where her father, who was in the Air Force, was stationed.

Duncan’s growing interest in the equine industry since coming to MU speaks to the success Crosby has had in exposing students from all backgrounds to the volunteer and leadership opportunities available at the equine teaching facility, Meyer says.

Duncan plans on finishing her master’s degree in the spring of 2018. After that, she is keeping her options open. Those options include pursuing a doctorate degree in developmental programming or being an equine science teacher or broodmare manager.

“I never thought I would be here, but I love my job, so if anything, what I have learned from my experiences at Mizzou and particularly at Chanceland, is sometimes when there’s an opportunity, you jump at it and you might just find out it gave you a lot of greater opportunities,” Duncan says.

She encourages undergraduate students to do the same, especially when it comes to internships.

“Do not be afraid to try to create your own,” she says, “because I would not have anywhere near the experience I’ve had if I hadn’t taken that jump and given it a shot.”