While on his phone in early August in Los Angeles, Tyron Woodley was still basking in the glow of his recent accomplishment — just as much as the Southern California sunshine.

“It definitely has not worn off,” Woodley says. “I’m still in a state of shock.”

That shock came as the result of winning the Ultimate Fighting Championship welterweight title against “Ruthless” Robbie Lawler at UFC 201 on July 30 in Atlanta. After starting his mixed martial arts (MMA) career 11 years ago following his tenure as a standout member of the University of Missouri wrestling team, Woodley has reached the pinnacle of his sport. 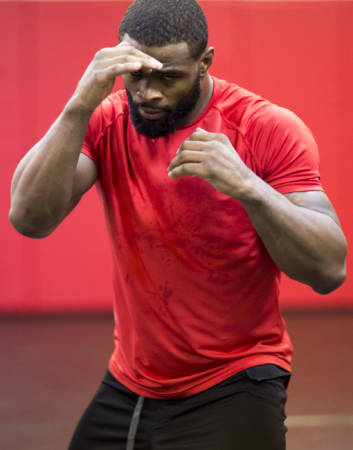 Tyron Woodley prepares for his UFC fights with a rigid training regimen. Photo courtesy of TyronWoodley.com.

Following his knockout of Lawler at the 2:48 mark in the first round, Woodley’s popularity soared, based on the numbers of phone calls and emails he received. He heard from agents, producers, autograph show organizers, old friends, family members — and several others looking to get in contact with the new champ.

One of those emails was from Joe Parcell, professor and department chair of agricultural and applied economics in the Division of Applied Social Sciences in the College of Agriculture, Food and Natural Resources. Parcell and former MU professor Bruce Bullock (who passed away in 2006) helped guide Woodley to his degree from the department in 2005.

Parcell had sent a congratulatory message to Woodley, his former student, on the morning of July 31 as he was getting ready to board an early morning flight. Parcell was surprised to get an instant response back from his former student.

“When he reached out to me I know he probably thought he would have gotten a message the next day, but I was up and certain people will never bug me when you hear from people who genuinely helped you,” Woodley says. “The people at CAFNR just really gave me that support system and encouragement and they really made me feel like I was part of a family.”

“Everything he’s earned, he’s made,” Parcell says. “He’s a self-made person. He’s accomplished a lot and come a long way.”

A source for success

Family has always been a driving force for Woodley’s career. He shared a synchronized sense of calmness with his family before the biggest fight of his life. “We had the confidence that the battle was won. I just felt like it was my time,” Woodley says.

When he began his MMA training, Woodley looked to the same inspiration that helped him get his CAFNR degree: His son, Tyron Jr., who was born during his junior year at MU.

“Before, if I graduated or I didn’t graduate, I was going to be the only one affected, but when you have another person who is dependent on you for support and things of that nature, I just felt like I needed to finish on top not only academically, but also finish on top when it came to wrestling and all of those avenues that I was in,” Woodley says. “I just really felt the need to go the extra mile and show my son that I could do it.”

“As a parent, I think one of the best things you can do for your kids is show them the struggle. Show them you’re not perfect, but also show them that you can keep fighting. You can try to overcome.”
― Tyron Woodley

When Woodley began his MMA training, Tyron Jr. was two years old. His oldest son turned 13 this past summer. Now Woodley and his wife, Averi, have four children: three boys and a girl. Mrs. Woodley is a co-owner and trainer at the gym they founded in St. Louis, ATT Evolution.

“He just saw the journey and the ups and downs,” Woodley said of his eldest son. “As a parent, I think one of the best things you can do for your kids is show them the struggle. Show them you’re not perfect, but also show them that you can keep fighting. You can try to overcome.”

Woodley began his career at the College of Engineering before deciding to transfer to the Trulaske College of Business. When he found out that all of his classes would not transfer over, he took a few agricultural economics courses at CAFNR to pick up some needed requirements. Woodley eventually decided to switch his major to agricultural and applied economics. Parcell, Bullock and other members of the CAFNR community then helped him with the difficult task of earning his degree on time while competing in major college wrestling. 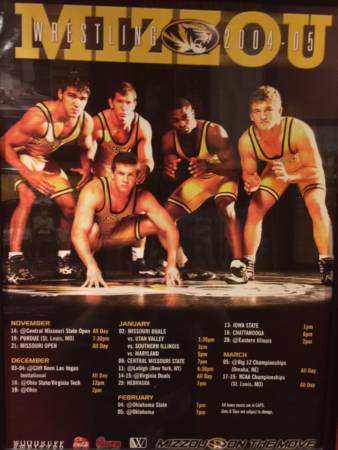 “When I got there, I said ‘Man, I’m staying here,’” Woodley says. “When I came to CAFNR, I really felt like they cared for us to be successful.”

Parcell recalls how Woodley’s humble and courteous nature and eagerness to learn turned out to be a perfect fit for CAFNR.

“He always knew that he didn’t come from an agricultural background, but he took it upon himself at every corner to understand that food system,” Parcell says. “He just wanted to be a learner. He never was asked to be treated differently. He would just come in and ask questions, which sometimes were about life, too, and that’s what we’re here for.”

Woodley has particularly fond memories of a class taught by Bullock that trained students on the live market and taught them about the importance of pre-market trading with stock futures information.

Such classes taught Woodley the importance of managing his own personal finances — and investing and saving — when he started earning larger checks for his fight appearances.

Woodley has been trying to make it back to the MU campus about every two years or so, but he makes sure to keep in frequent contact with certain fellow Tigers — like J’Den Cox, the three-time All-American MU wrestler who won the bronze medal in the 86-kilogram category at the 2016 Summer Olympics.

Woodley has had a longtime friendship with Cox and his family. The two chatted on Apple’s FaceTime a couple of weeks before Cox competed in Rio de Janeiro, Brazil.

“I’ve known him since he was 4 years old,” Woodley says of Cox. “I just feel like he just doesn’t know what it’s like to be fearful and nobody should ever teach him that. He doesn’t even know the amount of strength he has.”

Although Woodley now finds himself on fight cards in big-city arenas such as Atlanta’s Philips Arena for his big event, he still remembers his first MMA fight at The FieldHouse on Broadway in downtown Columbia many years ago.

“I felt like the stands were in the ring with me,” he said of the approximately 300 patrons who had crowded into the rather intimate venue.

In a makeshift ring assembled atop a dance floor, Woodley had forced his first opponent into a submission via a choke out in 20 seconds. In spite of all of his years as a traditional wrestler, the experience was entirely foreign to him. 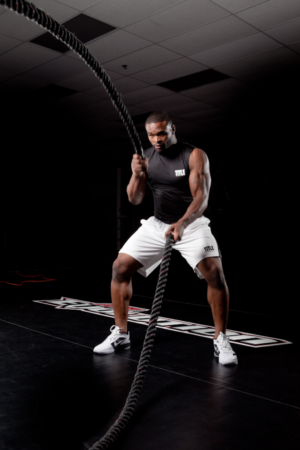 “It was significantly different because I actually always used to get nervous in wrestling,” Woodley said. “With this, I was nervous, but I also had this fierceness that came over me and I had that tunnel vision that I never had before and all I could see was my opponent.”

After the fight, he called up his mother to weigh his possible natural calling to the sport — his moniker is “The Chosen One” — versus any possible objections that she would have to it. His first bout had taken place just two weeks after he walked into a local fight promoter’s gym and managed to get on a fight card at the last minute after pointing out that he was the guy featured prominently on the MU wrestling poster in the promoter’s office.

“I was like ‘Mom, I feel like I could have killed that man with my bare hands.’ It kind of freaked me out, like should I be doing this sport?” he says. “I didn’t know if it was the right thing to do because I just beat these people up. She said, ‘You have to pray about it. If you’re good at it and it’s actually a sport, maybe it’s something you should pursue?’”

Woodley had first become exposed to the sport after watching his former MU teammates try their luck on the reality show “The Ultimate Fighter.”

“I wasn’t very educated on the sport. It seemed to me a little crazy at the time,” Woodley says.

He saw, though, how several college wrestlers had successfully made the jump to MMA and took note of the sport’s surge in public interest. After being on a wrestling circuit as a professional and defeating some opponents who had made it to the Olympics, Woodley decided to trade in the mat for a ring.

“I had been wanting to punch a lot of my opponents anyways,” he says with a chuckle.

As his amateur career continued to rise, he went onto an 8-1 record as a member of the Strikeforce professional circuit before it folded in 2013. That same year he took part in his first UFC fight. He currently holds a 16-3 record in UFC competitions.

Following his title victory over Lawler, speculation began to flutter around the MMA world about the possibilities of his next fight. Woodley will be defending his championship at UFC 205 on Nov. 12 at Madison Square Garden in New York City — the first sanctioned UFC fight in the state after a statewide ban on the sport was lifted earlier this year — against Stephen Thompson and his 13-1 record.

“I have put myself in a position to make a different career. I take the same mentality that I did in academics or athletics: I try to go out there and make things happen.”
― Tyron Woodley

In the meantime, Woodley, who turns 35 in April, continues to invest in his exit strategy out of UFC: the Hollywood scene. After first breaking into the film industry as a stuntman in “Olympus Has Fallen” in 2013, he made his acting debut with a small role in “Straight Outta Compton” in 2015, without the help of an agent. With an agent and acting lessons, Woodley hopes his persistence pays off in another form of mass media entertainment.

“I have put myself in a position to make a different career,” Woodley says. “I take the same mentality that I did in academics or athletics: I try to go out there and make things happen.”

At the same time, he believes in the power of patience.

“The best advice that I’ve received is being patient with the process. Everybody wants the end result: the fame, the stardom, the money, the cars. But they don’t want to do what it takes to get to that point,” he says. “So with that said, if you’re patient with the process and you endure the grind that you’re going to go through… If you can fight through that and you can keep pushing when you want to stop, at some point you will be successful. And I’ve really just always believed that.”