The Midwestern Foresters’ Conclave brings forestry clubs together from colleges and universities across the Midwest.

The actual event pits the clubs against each other in numerous timber sports competitions. There’s much more to Conclave, though, especially in regards to student networking. The students are together nonstop, even camping out the night before Conclave.

The University of Missouri College of Agriculture, Food and Natural Resources’ Forestry Club hosted the 64th Midwestern Foresters’ Conclave in April. It was the first time Mizzou had hosted the event in nearly 10 years.

Not only was Conclave well attended, MU had a great day, finishing second out of 11 teams.

“We were thrilled to be able to host Conclave,” said Bob Rives, graduate student. “I was really happy to hear all of the positive comments. It was awesome.”

To pull off an event of this magnitude, with several moving parts, it takes a strong team. Mizzou had just the group in place.

The MU Forestry Club was actually scheduled to host the 63rd Midwestern Foresters’ Conclave. During each Conclave, the presidents of each club meet to discuss the upcoming year’s event. Mizzou agreed to host the 2015 event and went right to work. 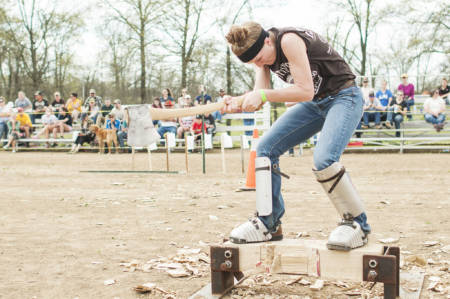 Each member of the MU Forestry Club had responsibilities during the 64th Midwestern Foresters’ Conclave.

“The way the process works is very club driven,” said Ben Knapp, the Mizzou club’s faculty advisor. “The presidents of the clubs all meet and plan out next year. Someone steps forward and takes it up. It’s very organic within the clubs. It’s pretty cool.”

After about six months, though, the MU Forestry Club realized hosting Conclave wouldn’t be feasible in 2015.

“We have a discussion every year about what school has the resources and ability to host Conclave,” Rives said. “We hadn’t hosted in several years, so we volunteered to have everyone come to MU.

“Our club numbers declined, though, and we had to defer. We notified them that we couldn’t do it about six months into preparations. Thankfully, Southern Illinois was ready to host and took over.”

After the 2015 Conclave, the presidents met once again to discuss the upcoming event. Mizzou volunteered to host again, with a goal of following through with the opportunity.

“We were in a much better place with our club after the 2015 Conclave,” Rives said. “We decided that we really could put on a good event, and we wanted to host the 2016 event.”

Conclave generally rotates throughout the competing schools. There is favor for schools that haven’t hosted in a few years.

“Honestly, it was probably good that we hosted in 2016 and not in 2015,” Rives said. “We really had a lot more interest this year. We had a lot of enthusiastic freshmen.

The first item on the checklist was a location where the competition could take place. Knapp and his group had a few places in mind and found the perfect spot in Hallsville.

“Since we did have the false start in 2015, so to speak, we did have an extended period of time to figure it all out,” Knapp said. “The first thing was the venue. We started that conversation in 2015. We talked with Hallsville, and everyone thought that would be a place that would work well.” 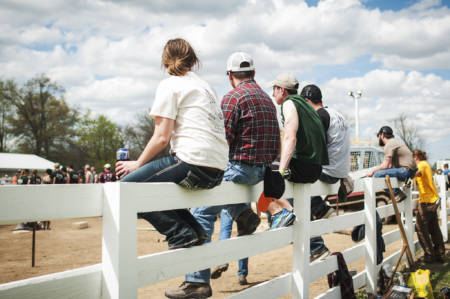 The Hallsville Fairgrounds was the perfect setting for Conclave.

The agreed-upon location ended up being the Hallsville Fairgrounds. Tom Pauley, Conclave liaison and member of the Board of Directors for the Hallsville Community Development Association, was thrilled to host the event in Hallsville.

“Everyone here is really excited,” Pauley said in an earlier press release. “It’s really cool to be able to host the event.”

Knapp said they considered a couple of other locations, but once they found out the Hallsville Fairgrounds were available, that became the emphasis.

“We did check some other places originally,” he said. “I think a past Conclave was held in a state park. The facilities at Hallsville could accommodate a lot of scenarios. They were really excited about it, too. Once we knew it was a possibility that was our main focus.”

Hallsville helped with the food and allowed participants access to the entire fairground.

“They gave us resources and we were allowed to use all of the buildings,” Rives said. “They had a Bobcat that they let us use. We’re a bunch of random kids and they trusted us completely.

“It was great. I can’t say enough about them.”

Hallsville also allowed all of the participants a chance to camp out on the fairgrounds the night before Conclave. Each team has their own style, and Rives said camping is a great opportunity to sit down and get to know each other.

“It allows us, as emerging professionals, to meet with future colleagues,” he said. “That’s the cool thing about Conclave – you get the fun of the event mixed with an opportunity to meet with people that you’ll see down the road, whether it be a conference or workshop.

“You also get to see what other programs are doing, what they’re emphasizing and where they’re at in a more laid-back environment.”

Knapp said the entire Conclave team had responsibilities. Registration, organizing information packets and keeping the other colleges and universities up to date on policies were all student responsibilities. Club members were also in charge of getting a complete list of the participants and getting several waivers signed.

“We delegated things to the club members,” Knapp said. “Thankfully, everyone is excited about Conclave and knows it’s coming, so it’s not hard to get the students to register.” 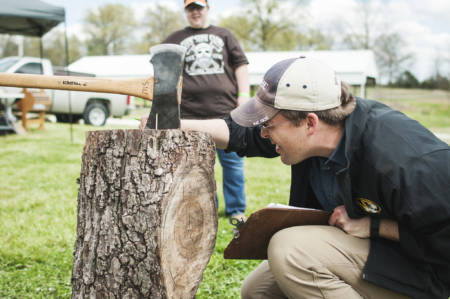 Rives said they used Facebook as the central hub of information. They contacted the colleges and universities through that social media outlet.

“That actually worked out really well,” Rives said. “We received some good feedback from that.”

Mizzou also worked with STIHL and ESPN for the event. STIHL hosts its Timbersports Midwestern Collegiate Qualifier, with four different events, during Conclave. The winners of those events advance to the U.S. Collegiate Championship. ESPN shoots video of the qualifier.

“It was a nice partnership,” Knapp said. “STIHL has their own series of events, first at regionals, with the winners advancing to nationals. Their event does bring the TV cameras and the crowds. I think the peak of attendance was during the ESPN event.

“Having STIHL and ESPN there was really a positive for everyone. They were supportive and helped set things up. It helped bolster the event and make it better.”

“The wood for the ESPN event had to have certain specs,” Knapp said. “The wood came from West Virginia and was delivered by a guy from Tennessee. The STIHL folks were very helpful in that process. They told us who to call and how much to order.

“The delivery truck broke down the day before, unfortunately. They had to rent a U-Haul to deliver it. They got there around 9 p.m. the night before the event. We still had to cut it and get it ready, so it was a pretty late night. It all worked out great, though.”

Leading up to the event, Rives said the Mizzou squad practices every weekday for at least a month. He said that six weeks of practice before is ideal, but the weather doesn’t always cooperate. 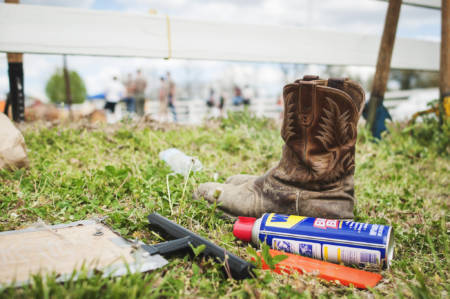 MU practices nearly every day for at least a month before Conclave.

“You have to have eight to 10 practices in before you can compete,” Rives said. “You also have to put in work hours. Everyone wants to participate in Conclave, and we want the most devoted members to get that chance.”

The team practices at the College of Agriculture, Food and Natural Resources’ South Farm Research Center. They order around 2,500 board feet of cottonwood to practice with. Another reason that the group practices so often is for safety.

“These aren’t like the axes hanging in your grandpa’s wood shed,” Knapp said. “These can shave hair. You have to know what you’re doing and be careful with those axes.”

Mizzou also competes in smaller timber sports competitions during the fall. They generally travel to the Ozarks to compete in similar events.

“We really spend a lot of our money on practice. We put in a lot of time, and that allows us to be so competitive.”

All of the practice paid off, as Mizzou finished second behind the University of Wisconsin-Stevens Point. MU had a relatively young team this year but inexperience didn’t faze the group.

“I wasn’t surprised at all when we finished second,” Rives said. “We generally finish second or third at Conclave.”

The 2016 Conclave was the fourth that Rives has competed in. It was the third Conclave for club president Levi Bachmann. The rest of the team hadn’t competed at Conclave or had only one appearance.

Aaron Hovis, from Three Rivers College in Poplar Bluff, Mo., also competed at Conclave. Hovis has competed at the national event and is somewhat of a celebrity among the group. While there were kids asking for Hovis’ autograph, he always had time to help other competitors.

“When you talk to Aaron, he doesn’t act like a celebrity at all,” Rives said. “He’s the nicest, down-to-earth guy that you’ll meet.

“He was helping us a lot. He joined in and helped set up and take down stuff.”

Mizzou had support elsewhere as well. Knapp said there were several timber companies among the sponsors of the event. Alumni were also a big part of the event.

“The event was very well-attended and supported by alumni,” Knapp said. “That was a really big positive. It was great to see them at the event and interact with them.”