This past June approximately 50 members of the Clay Family… Expand ▸

Everything in John Clay’s office has a story. In one corner, there’s the dictionary that dates back to 1934 that was used primarily for Scrabble word challenges by his great aunts and uncles.

“It looked this new when I was a baby,” Clay quips of the giant book that rests on a stand that was once in the foyer of his family’s former homestead, built in 1892 by his great grandfather, John Moore Clay, and known as “El Moro.” The house accidentally burned down in recent years. 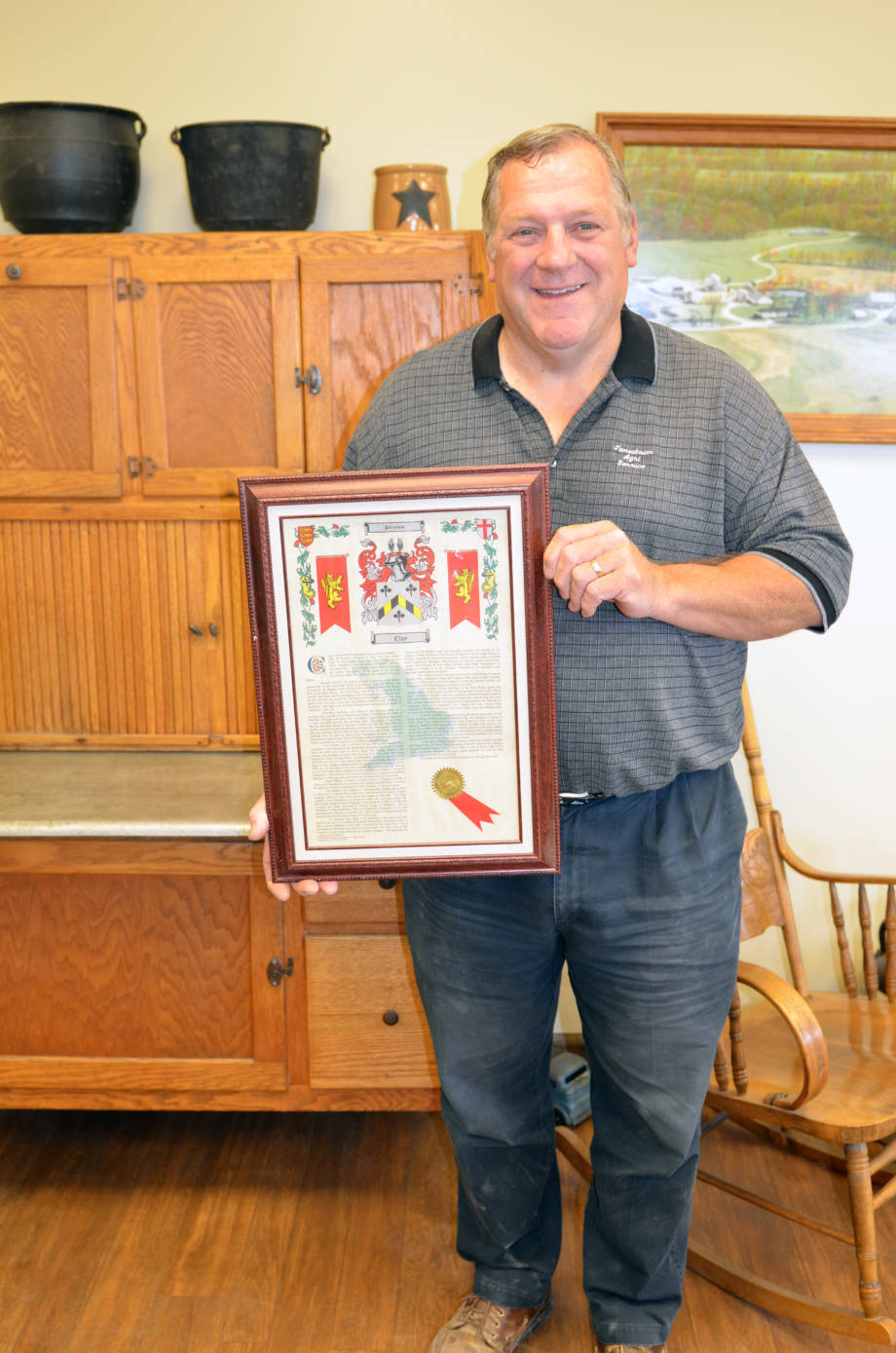 John Clay stands with his family’s crest outside of his office at Clay Farms west of Lupus, Mo.

On another wall, there’s a replica of fireplace mantle made by his father, Hudson, that is identical to the one that hung in El Moro. It turned up at an auction and was given to John by his son and daughter-in-law, Andrew and Kacey, last Christmas.

John represents the sixth of eight generations of the Clay family who have called the Lupus area home since Jeremiah Walker Clay, John’s great-great-great grandfather, first settled in the area in 1816. The administration building that houses his office, where he helps run the operations both for Clay Farms and Jamestown Agri Service, over the years has turned into a museum of sorts that best illustrates his family’s history in what would turn into Moniteau County.

The Clays have retained numerous family heirlooms that have been either refurbished, purchased at auctions or returned to them. Still…

“The stories of togetherness are really some of the best treasures we have,” says John, who served on the Mizzou Ag Alumni Association Board of Directors from 2002-08 and currently serves on the Advisory Board of Bradford Research Center. “We have a lot of old furniture and things like that. That’s obvious. You can look around and see that we care for that and that’s nice but that’s not what it’s all about.”

A time to reflect, celebrate

Earlier this year, on June 25, approximately 50 family members gathered to share those stories and celebrate the 200th anniversary of Clay Farms. The endeavor began when Jeremiah claimed land while setting up a trading post at a spot bountiful with wildlife, timber and adequate transportation via the Missouri River. He later received a land grant that was signed by former U.S. President John Quincy Adams in 1828, which the family still has. 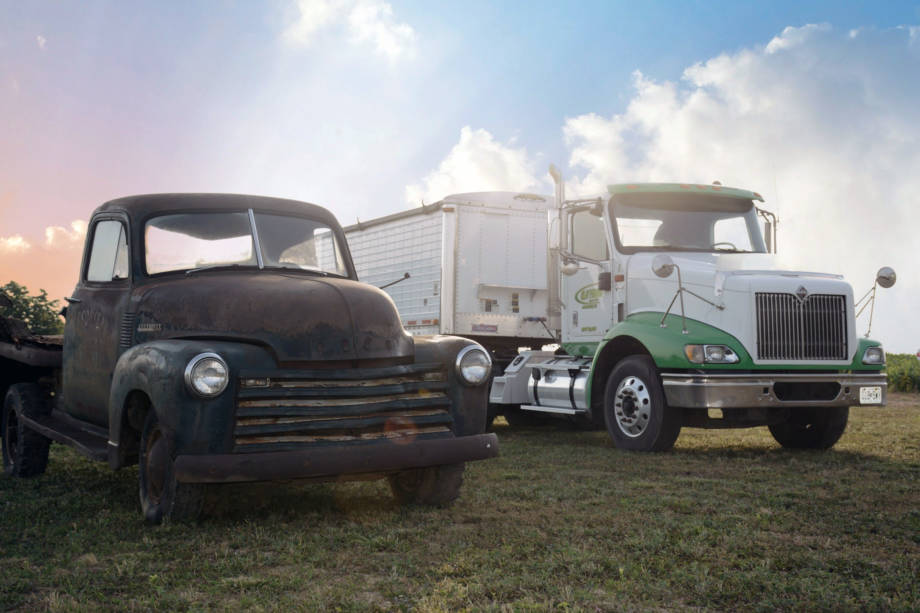 Now, in spite of some of the Clays moving to other parts of the country, the family farm still remains strong with corn, soybeans and beef cattle with Andrew overseeing the production management side of the operation.

Andrew along with his wife and three children — Hudson, Hayden and Hadley — live in a house that was initially built by John’s parents in 1963. It is located next to the farm’s administrative offices. John and his wife, DaLana, live two miles down the road. John’s daughter, Kristen, who graduated from MU with a psychology degree in 1998, lives in Atlanta with her husband, Adam Barnes (who earned an agriculture economics degree from MU in 1998). They have two children, Alex and Lauren.

“Our tie as a family and the closeness that we have is something that is very, very important to all of us,” John says. “And we just had a special time.”

John and his two sisters, Linda Nivens and Nancy Stevens (both MU graduates in education), spearheaded the occasion. After holding a private event during the first part of the day, the Clays opened their celebration to the public. Approximately 250 people showed up to join in the fun on the farm grounds, which was part of the first class of farms to receive Missouri Century Farm designation in 1976. It was also featured as the Family Farm of the 21st Century at the 1998 Missouri Governor’s Conference on Agriculture. 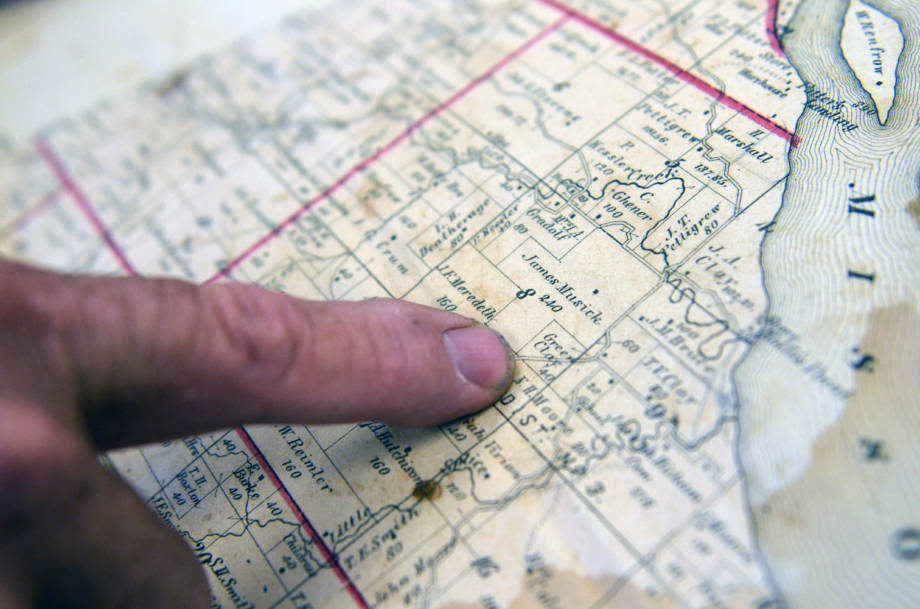 “We were just greatly honored,” John says of the turnout of the surrounding community. “We do take a lot of pride in our heritage here, our family history and the involvement that the generations have had in this community over the years.”

Each attendee had the option of picking up a pamphlet that traced the Clay family all the way back to England in detail. Among the information included about the family, which first arrived in the U.S. by way of the Jamestown (Va.) colony in 1613, was the fact Cassius Marcellus Clay — the great-great grandson of Dr. Charles Clay (Jeremiah’s great grandfather) — was a Kentucky politician who worked at abolishing slavery.

In addition, Cassius donated 10 acres of land to form a racially integrated liberal arts college south of Lexington (Ky.) called Berea College. He was also the namesake of the famed boxer from Louisville, who would eventually be known by the world as Muhammad Ali.

Charles Clay also had a great-great grandson named Henry, who represented Kentucky in both the U.S. Senate and as Speaker of the House of Representatives, for three non-consecutive terms.  He ran for the presidency in 1824.  When his candidacy failed, he supported John Quincy Adams, who won the election and asked him to serve as Secretary of State. 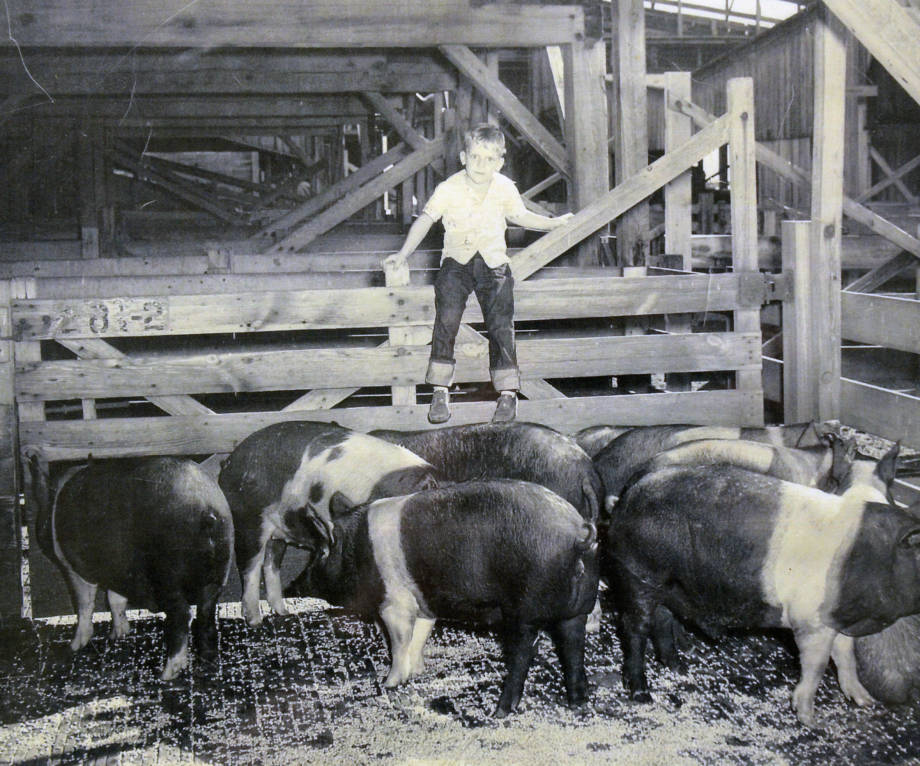 From an early age, John Clay helped out around his family’s farm near Lupus. Here he is tending to some hogs.

John was born in 1951. He spent his childhood on his family’s land. At a very young age, he took care of a lamb as part of a 4-H project before moving on to tend to pigs and cattle. By age 13, his parents let him rent his first farm, 40 acres of nearby river bottomland.

When he made his way to Columbia as a freshman at MU in the fall of 1969, he experienced a bit of a culture shock going to a large university during a politically turbulent time in the U.S. rife with protests on the Vietnam War and other related social issues.

“It was a totally different world and here I had left a little community with a hundred-some students in the entire school,” John says of the set-up in Jamestown, located nine miles down the road from Lupus.

John’s time as a college student was tempered by the work he would do back on the farm on the weekends, and even nights — although he did have plenty of good memories living at the Alpha Gamma Sigma agricultural fraternity house. At one point, John worked as a night foreman 40 hours a week at a livestock sale barn while taking 21 credit hours.

“College was not quite the experience for me as it is with some,” he says.

John came to MU intending to become a vocational agricultural teacher. He later went on to earn the prestigious American Farmer Degree from the FFA in 1971 — for work that began while he was in high school — and his degree in agricultural education, located in the Division of Applied Social Sciences, in 1973 from MU. He was going to follow the family trend of becoming educators; his great grandfather, John Moore, entered the teaching profession when a hunting accident took away his ability to farm. 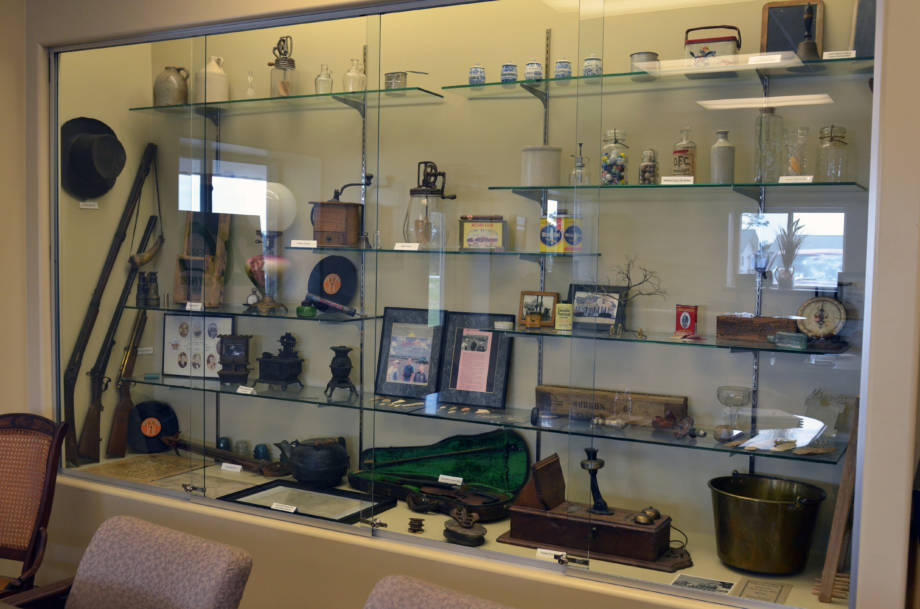 The inside of the Clay Farms administrative contains a glassed-in history exhibit that illustrates the 200 years the Clay Family has called the area home.

Another family tradition, though, came calling at the farm.

“I was the only son,” John says. “The timing was right for me to come back and be involved in that so that was my decision and I’ve never regretted it. It’s been a good life for me.”

Over the years, the contacts he made while at MU and through the Ag Alumni Association have proved to be extremely beneficial when it has come to running his operations — as many of his former classmates have gone on to prominent roles within the state’s agricultural industries.

“If you need to know something and want to know, it’s a phone call way and not everybody has that opportunity,” John says.

John purchased Jamestown Agri Service in 1998. Over the years, he has expanded on the company’s initial offerings of being a vendor of Purina Mills animal foods, agricultural chemicals and fertilizers into the platforms of electrical, plumbing and home improvement services for the locals who do not wish to venture into Columbia or Jefferson City.

“We kiddingly refer to ourselves as being the quick shop of agriculture,” John says. “We have kept expanding and it’s been very successful for us.”

Although, to date, 9,026 farms have earned the Missouri Century Farm designation, that number drops to less than 50 when looking at farms that have stayed in the same family for 200 years or more, according to Andy Emerson, coordinator of the Missouri Century Farm program. For the record, the longest family-held farm in Emerson’s records goes back to a farm in Bollinger County that dates back to 1788.

“I think when the family applies for Missouri Century Farm recognition, it’s kind of an incentive to the people they pass it onto to try to keep it in the family and preserve the land,” Emerson said.

Andrew’s children, two boys and a girl, “are very much little farm kids… They are in the dirt constantly,” according to their grandfather.

He likes his chances of his family farm remaining just that for many more years to come. 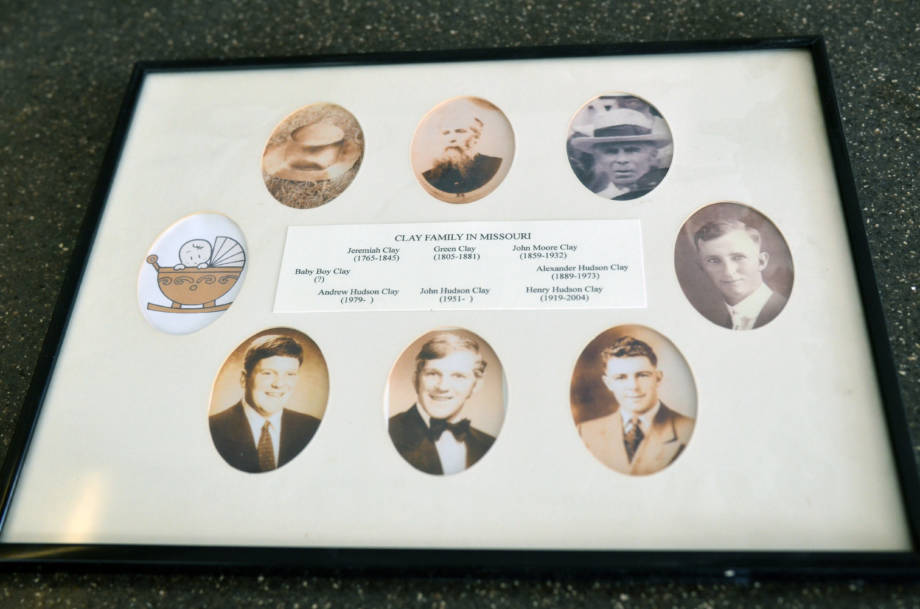