The University of Missouri College of Agriculture, Food and… Expand ▸

You never know what you’ll find for sale on the side of the road. 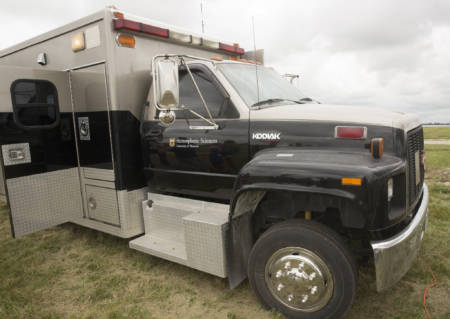 Henson, who grew up in Carthage, Mo., was heading home to visit her parents on a weekend last year when an ambulance with a for sale sign in the window caught her eye. Henson had just had a discussion with Pat Market, department chair and professor, about turning an ambulance into a weather vehicle.

Henson thought they may have found just the vehicle.

“My route home takes me through the town of Lebanon,” Henson said. “I stopped when I saw the ambulance and took a picture to show Dr. Market. He showed interest right away. I made a phone call to the seller and set up a time to meet and look inside the ambulance.”

While converting an ambulance to a weather vehicle may seem uncommon, Market said the practice isn’t as rare as many would think. Ambulances are built with plenty of storage and room to make it a perfect vehicle to research storms. There is a desk for laptop use and several cabinets for storing various items. Ambulances are also set up with tanks that take oxygen. Those tanks can be filled with helium, too, like the helium used in weather balloons.

“I would like to tell you that the idea was original, but it’s not,” Market said. “I’ve done a couple projects like this.”

This specific ambulance, now named the Missouri Mobile Meteorological Observatory, or MO³, checked off several boxes for Market. He wanted a vehicle that was mechanically sound and a chassis in good condition. This ambulance was both of those things.

“It really was a diamond in the rough,” Market said. “The initial pictures were pretty exciting, but it did have some issues. We were really interested, though. It took a couple weeks, but we got the deal completed.”

The previous owner of the ambulance was using it for a unique purpose as well. He was a race-car driver and used the ambulance to pull his car to different races. The ambulance also served as his home away from home during his trips. Instead of spending money on a hotel, he slept in the ambulance, which included a bed, microwave and a DVD player. The previous owner also had put in insulation and a built a wall in the back for privacy. 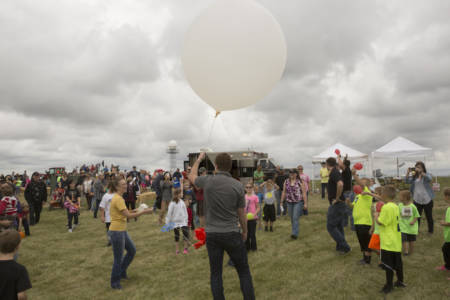 Market replaced that back wall with functional doors and added a Mizzou paint job to the vehicle.

“Repainting the ambulance was probably the toughest task,” graduate student Josh Kastman said. “The previous owner had several logos all over the ambulance, as well as a lot of decals everywhere. We spent a lot of time scraping some very colorful paint off.”

There is plenty of equipment that Market and his team bring to each weather event. The ambulance includes storage shelves and cabinets for that equipment, as well as a lot more leg room.

“Sitting hunched over on buckets wasn’t always a lot of fun,” Kastman said. “This is a pretty nice upgrade. We’ve got a lot more room and that makes doing our research a whole lot easier.”

Before purchasing the ambulance, covering a severe weather event was a little bit of a chore for Market and his team. They would rent two vans for multiple months, which cost nearly $1,000 a month. If the teams wanted to make a trip on short notice, there were several hoops to jump through as well.

“There is a lot of downtime between weather events normally, so there was a lot of wasted money when we were renting vans,” Market said. “Having our own vehicle allows us to get out and go right when we need to. We don’t have to ask or wait to use it.”

Market said they travel throughout Missouri, as well as eastern Kansas, southern Iowa and parts of Nebraska. He added that they have a similar set-up to the weather vehicle, but that station is in a fixed location in Columbia.

“This vehicle allows us to do a broader range of field projects,” Market said. “It’s immensely valuable. We’re now able to bring something to the table.”

The weather vehicle isn’t restricted to Market and his team, either. Market describes it as a department resource. For example, Pat Guinan, an associate extension professor, has 30 stations throughout the state that he visits. Normally, he would have to use his personal vehicle. Now, he can load his equipment in the back of the ambulance and make his trips. 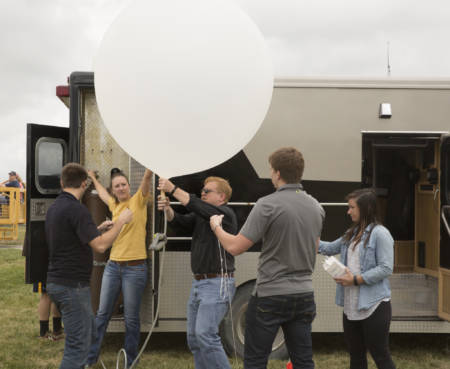 “With this vehicle, and the money it will save us in the long run, we can deploy more often to study heavy precipitation events,” Henson said. “More field experience is always better for research. More deployments means more data for analysis, which means more accurate results. The ambulance also allows for our deployments to be more efficient and organized, in that the storage space and layout allows us to easily launch weather balloons in a timely manner, giving us all the data we need.

“With vans, our supplies were kept in cardboard boxes in the back on top of the helium tanks. Now, we have shelving and a set place for each item we need. Helium tanks are stored more properly with the ambulance, so balloons can be filled outside next to the vehicle instead of having to leave the back doors of a van open while we fill the balloon.”

The new weather vehicle will also give the Department of Soil, Environmental and Atmospheric Sciences an opportunity to market what they do. They recently deployed a weather balloon and handed out items during the most recent South Farm Showcase. It was a great opportunity to interact with the Columbia community.

“Having our own vehicle will allow for research like this to continue for as long as the vehicle is operational,” Henson said. “This will be of use to the program for several years to come, whereas, without the vehicle, the funding provided to rent vans for the project is not guaranteed. This vehicle provides the program with a means of field research that not all universities can provide, which also leads to more data and analysis of weather events that can contribute significantly to atmospheric research.

“Along with research, this vehicle can also be used for demonstrations of weather balloon launches for younger students, like elementary or even high school. It can promote studies of atmospheric science and science in general, while being a cool thing for the students to explore.”