The Tomato Festival has been a staple at the Bradford Research Center for the past 11 years.

This year’s event was no different.

More than 1,000 attendees enjoyed a beautiful day of tasting tomatoes and peppers during the 12th annual Tomato Festival on Thursday, Sept. 1.

“It was wonderful to have so many members of our local community out enjoying the tomatoes and peppers,” Bradford Superintendent Andrew Biggs said. “Overall, I think the festival went extremely well. We introduced a few minor changes this year, and they all seemed to be well received.” 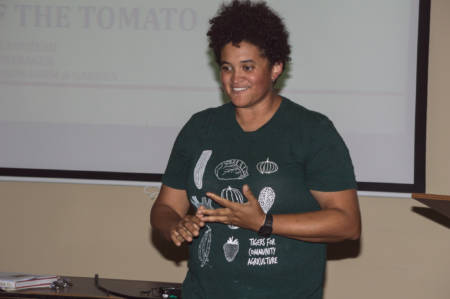 Leslie Touzeau talks to attendees of the 12th annual Tomato Festival, which took place Thursday, Sept. 1 at the Bradford Research Center in Columbia.

This year’s event featured more than 250 varieties of tomatoes and 160 varieties of peppers – the most in the festival’s history. Attendees rated the tomatoes and peppers on a scale of one to five. A one rating is given to a tomato or pepper that attendees really enjoyed. Biggs said Bradford doesn’t have the completed results calculated yet, but he and his colleagues did notice attendees flocking to a few varieties.

“The hot peppers really started to draw quite a large crowd once someone was brave enough to try them,” Biggs said.

Along with the tastings, there were several children activities, including a corn maze cut out in the shape of the continents, coloring books and sandboxes full of corn and soybeans. One of the busiest stations was the milk tasting.

The Tomato Festival also included tours of the Bradford Research Center, presentations and several area restaurants showcasing their tomato-based cuisine. Bradford also had demonstrations, with one showing the same salsa being made eight times with the only difference being the pepper used.

“We’re always happy to have people come out to the Bradford Research Center and learn more about the agricultural world – and have a lot of fun, too,” Biggs said.