Superintendent Bruce Burdick talks to attendees of the… Expand ▸

The first ever Hundley-Whaley Research Center Twilight Tour was a big success, bringing in nearly 150 attendees on Tuesday, Aug. 23. The attendees heard about the various research being conducted at the Center, located in Albany. 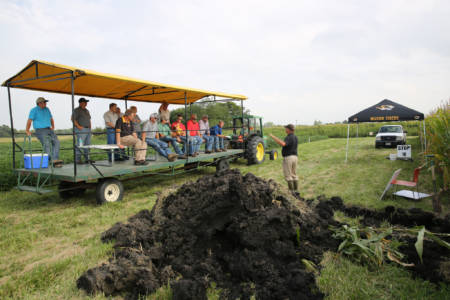 “Our first Twilight Tour went very well,” Superintendent Bruce Burdick said. “Several of the people whom I talked with really enjoyed the evening environment. We were really happy with how everything went.”

Burdick presented Tom Payne, University of Missouri College of Agriculture, Food and Natural Resources Vice Chancellor and Dean, with a plaque during the free dinner. Payne is retiring in December after 17 years of service to CAFNR.

“He’s been instrumental for Hundley-Whaley,” Burdick said. “He’s given us the green light to run operations as we see fit.”

Hundley-Whaley typically hosts its Field Day during the morning hours, offering a free lunch. Burdick said the Center wanted to shake things up this year with tours in the evening and a free dinner. Tours ran from 5-7 p.m. this year, with the dinner beginning at 7 p.m.

“I talked to several people who haven’t been able to attend our Field Day because it’s in the morning,” Burdick said. “This change gave them the opportunity to spend some time learning about our research.” 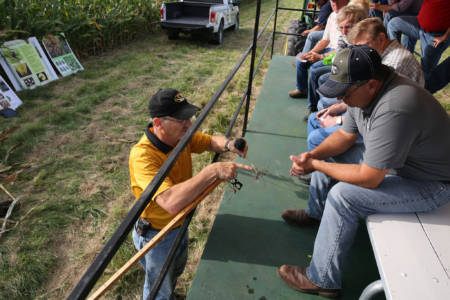 Several faculty members from CAFNR served as speakers for the event. Tim Reinbott, Director of Field Operations of the Missouri Agricultural Experiment Station, discussed cover crop establishment and its importance. Wurdack Research Center Superintendent Dusty Walter talked about pollinator and monarch habitat. Greg Luce, an adjunct professor in the Division of Plant Sciences and research director with the Missouri Soybean Association, warned attendees of the current and future insect issues.

“I think having so many different speakers and topics is one reason that people enjoyed our Twilight Tour so much,” Burdick said. “They were able to hear about some topics that they wouldn’t get in another setting. This isn’t a workshop for a specific topic. We like to paint with a broad brush.”

For a closer look at the Hundley-Whaley Research Center Twilight Tour, visit flickr.com/photos/cafnr/albums/72157671945750942.