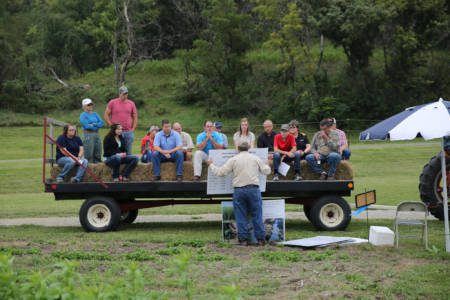 The Graves-Chapple Field Day began with an appreciation breakfast. Crawford recognized several attendees, including MU College of Agriculture, Food and Natural Resources Vice Chancellor and Dean Tom Payne, who is retiring in December after 17 years of service to CAFNR.

“Dean Payne – he says that he doesn’t do much, but that’s not true at all,” Crawford said. “A lot of the little things that he does that he doesn’t even remember; we remember all of that. He’s been a huge advocator for us. He’s always supported us.”

Crawford also recognized Marilyn Graves during the free lunch, after the presentations came to a close. Graves played an instrumental role in the establishment of the Graves-Chapple Research Center.

“Marilyn Graves has been to every Field Day,” Crawford said. “She’s been an ambassador for the Graves-Chapple Research Center. She’s someone who everybody looks forward to talking to.” 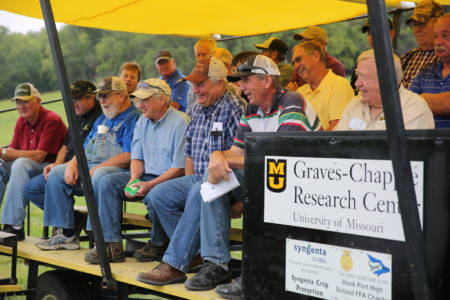 “We want to have people speak who are well-known in our area,” Crawford said. “We rely heavily on extension specialists. We want the attendees to feel like they can call those specialists whenever they have questions.”

Several faculty members from Mizzou also presented. Andrew Scaboo, an assistant research professor in the Division of Plant Sciences, who has several soybean research plots at CAFNR Agricultural Research Centers, talked about breeding conventional soybeans at MU. Greg Luce, an adjunct professor in the Division of Plant Sciences and research director with the Missouri Soybean Association, warned attendees of the current and future insect issues.

“The Research Centers and extension specialists have the same overall goal: We want to bring that knowledge to the people of Missouri,” Crawford said. “The local extension agents have a great relationship with the local landowners and farmers. There’s a sense of trust between everyone there. It’s a critical bond.”