Mike Smith and his wife, Stephanie, pose for a photo during… Expand ▸

This walk was not going to be as long or rigorous as the first one, Mike Smith assured Stephanie, his wife of 39 years.

On that first walk in the summer of 2011, Smith, a professor of reproductive physiology in the Division of Animal Sciences, and his son, Nathan, covered approximately 200 miles across some of northern England’s hilliest terrain. They walked from the Irish Sea on the country’s east coast to the North Sea on the west coast, encountering an elevation change of 25,000 feet during the 15-day expedition. After walking up to 19 miles in a single day, the father-son duo wrapped up a day’s journey with dinner at a pub, followed by a one-night stay at a bed and breakfast. 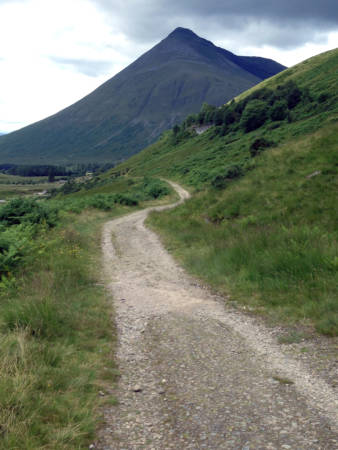 A lingering foot injury prevented Stephanie from going on that first trip, but with good health she gave her husband the green light when he suggested a trip to Scotland. The two of them went on a similar but smaller eight-day trek, traveling north of Glasgow for a total of 96 miles.

After booking their trip in January through a company that specializes in such expeditions, the Smiths began their training regimen. Mike ran in the winter, before switching to lengthy walks in the spring. This allowed plenty of time to break in his boots (with two pair of socks) ahead of the journey.

“Running’s OK, but it doesn’t prepare you as well as you might think,” he says. “This walk is different from most forms of exercise because you’re on your feet for seven to eight hours in a day. You have to get used to being on your feet that long.”

The Smiths are no strangers to Scotland, where they spent a year while Mike worked on a project at the Roslin Institute at the University of Edinburgh in the late ’90s. Coincidentally, he was at the institute when the announcement of a sheep named Dolly became the first cloned mammal using the nuclear transfer process (though he was working on a separate project).

When the Smiths’ trek began in the town of Milngavie (pronounced Mull-GUY) in late July, they were standing just eight miles from where Mike’s maternal grandfather grew up and about 13 miles from where his grandmother was raised. 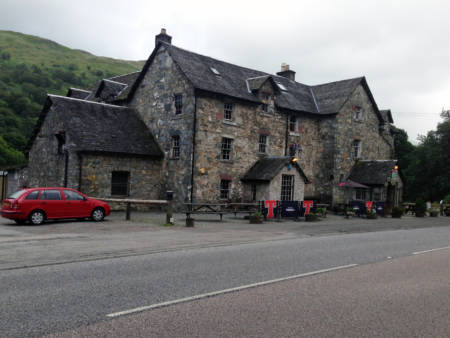 One of the stops along the Smiths’ journey was The Drover’s Inn, built in 1705. Photo courtesy of Mike Smith.

“It was meaningful to me because my grandmother would tell me about walking along Loch Lomond and that’s right where we walked,” he says of the lake that greeted them on the first part of their trip.

What followed was an itinerary on a path called The West Highland Way. With map in hand, they navigated up a serpentine path through scenic green hills and countryside to Fort William, located about two-and-a-half hours by car from their starting point. The trek had an overall elevation change of approximately 13,000 feet.

The longest day consisted of a 16-mile walk from Rowardennan Hotel to The Drover’s Inn at Inverarnan; the shortest, 8.5 miles. Every day the Smiths carried backpacks that weighed about 12 pounds, while the travel company shuttled their luggage to the next hotel.

Other walkers took a more outdoorsman approach in spite of the elements, which could include wind gusts up to 50 miles per hour. Near the same line of latitude as the Hudson Bay, the temperature ranged from 60 degrees (Fahrenheit) to as low as 40 with daily bouts of rain and wind.

“There were a number of people who we passed who were camping on the way, but you’ve got to pretty hard core. You’ve got to be able to carry 40-something pounds of equipment and then you have to be willing to set up a tent in the rain, in the wind,” Mike says. “At this point in my life, it was adventurous enough just to walk from one bed and breakfast to the next.” 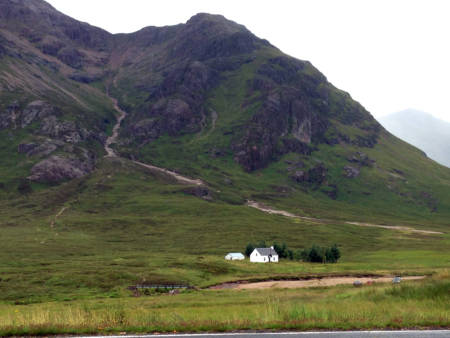 A farmhouse sits at the edge of a valley in northern Scotland. Photo courtesy of Mike Smith.

For the Smiths, the bed and breakfast locations — and all of the interesting stories within them — represented rewards for their physical exertion. The Drover’s Inn, for instance, built in 1705, still has its original stone walls. Another inn, the King’s House, received its namesake as a barracks for the troops of George III. Built in the 17th Century, it is believed to be one of Scotland’s oldest licensed inns.

Many miles to go?

Mike first heard about these kinds of walking exhibitions while on another year-long research leave at the University of Cambridge in the late ’80s from a professor there who frequently went on such trips with his wife.

He never gave the idea much thought, though, until his father sent him an article published in the Smithsonian magazine several years later. The author went on a coast-to-coast walk in England, keeping a diary and taking pictures along the way.

“I read the article and it really captured my imagination,” Mike says.

The professor still has his eyes on a few other journeys including one called Pennine Way. The trail runs 267 miles, starting in England just east of Manchester and ending right over the Scottish border.

“If I was to take a month I think I could do it, but it’s a lot of elevation change and some pretty intense weather,” Mike says. “I’d like to do that, but I’m 64 and I’m not 100 percent sure if time has passed me by on that.” 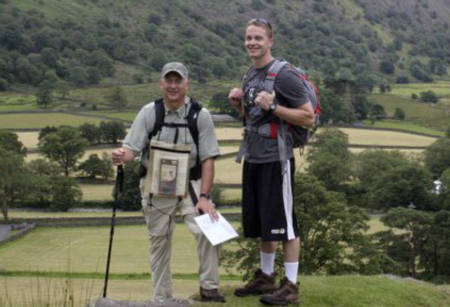 Mike Smith and his son, Nathan, completed a 200-mile walk through England in 2011. Photo courtesy of Mike Smith.

He encourages anyone to try such walking expeditions, provided that he or she is willing to put in the training and preparation to be able to finish the walk and enjoy the time. Due to the remoteness of the accommodations and the popularity of the walks, those interested should also book their trips six to nine months ahead of time.

“You’ve really got to get your body used to walking fairly long distances each day and you have to be prepared,” he says.

When Stephanie could not make the England trip, Nathan joined his father after returning from a second deployment to Iraq while serving in the U.S. Army Reserve. Nathan is a 2012 graduate of CAFNR’s agribusiness management program.

Mike appreciates that he shared such a journey with both his wife and son.

“If you do a unique experience that other people haven’t done, it’s something that you continue to talk about for a long period of time,” he says. “It gives you a common point of reference.”