Three University of Missouri College of Agriculture, Food and Natural Resources Agricultural Research Centers had a unique opportunity in the month of July.

Mizzou K-12 Online, part of the MU College of Education and the parent program of the MU High School, brought more than 100 of its high school students from Brazil to the Mizzou campus. The program was focused on showcasing the many different career opportunities to the students, as well as showing them what all MU has to offer.

“Looking at different careers was the focus,” said Thitinun Boonseng, program coordinator for Mizzou International Experience. “We wanted the students to interact with not only Mizzou students, but also industry professionals. We wanted to make sure agricultural careers were a part of that.”

The students were at Mizzou from July 16-30. A total of 129 students visited the Research Centers – 112 students from Brazil and 17 local students. There were also 23 MU student ambassadors who helped with the day-to-day operations.

The students spent one full day touring Jefferson Farm and Garden and the South Farm Research Center. At Jefferson, students learned about pollinators, watersheds and food systems. They even had a chance to fish in Jefferson’s pond. 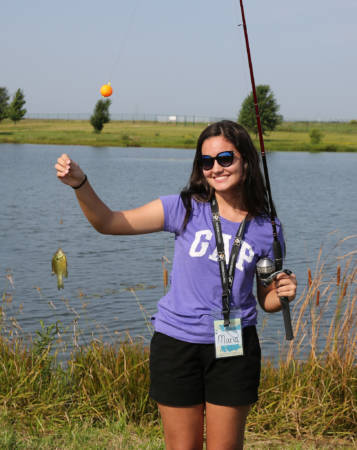 Several students caught fish while casting their lines into the pond at Jefferson Farm and Garden.

“Hosting the international students at Jefferson Farm and Garden was a real pleasure,” Superintendent Amy Dooley said. “It provided us with a great opportunity to highlight the work we are doing with pollinators and demonstrate the importance of water quality. The students also got an up close look at our vegetable production fields and experienced what it was like to harvest fingerling potatoes.

“I think the favorite activity of the day was fishing in our pond. Many students shared that it was the first time they ever caught a fish.”

The South Farm Research Center showed off how drones can be used in agriculture and how different turf grasses feel. Students were able to able to golf and play soccer on the different grasses. Presentations on agroforestry were also included at South Farm. Students planted trees and took turns revving the motor of a chainless chainsaw.

“The students have been exposed to American culture for the most part,” said Fatin Asnan, associate program coordinator for Mizzou International Experience. “There are still so many things to learn and so many things to explore. That’s what we wanted to offer them; a chance to interact with Mizzou students and learn about the University. It was a great experience for everyone.”

The group spent a full day at the Bradford Research Center as well. Students were introduced to several different aspects of agriculture, including crops, engineering and plant genetics. Students also learned about Bradford’s shrimp project and what makes good pollinator habitat.

“It was wonderful to have the students out at Bradford,” Superintendent Andrew Biggs said. “Everyone was interested in our presentations, which is a testament to how engaged they were. We’re always happy to talk with possible future CAFNR students.”

More photos from the visit to the Research Centers can be found here.

This was the first year that Mizzou K-12 brought students to the MU campus. It was also the first time that Boonseng and Asnan organized an event of this magnitude. The students received grants to attend the program.

“This is a new initiative,” Boonseng said. “Anything new is usually not simple. We tried our best to involve a lot of people. Thankfully, we have a really good relationship with Brazil.

“We didn’t want to do a lecture format. We wanted to give the students hands-on experience and for it to be interactive. We also wanted them to be open-minded and asked that they didn’t just focus on one career. We wanted them to take an interest in several different careers. We’re hopeful that something sparked.”

During their stay, the students met with industry professionals from Monsanto, Boeing, Anheuser-Busch, and others. They also had an opportunity to see everything the Mizzou campus has to offer. They spent time at Faurot Field and MU’s athletic training facility. They slept in the dorms and were exposed to the true MU experience. 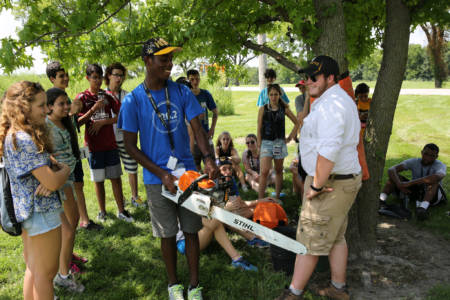 The program featured several hands-on activities, including trying to hold a chainless chainsaw.

It was two weeks packed full of activities.

“These are potential freshmen,” Boonseng said. “We hope they want to come back to Missouri and become a Tiger.”

Along with agricultural careers, the students learned about the day-to-day work of lawyers, doctors and engineers.

They even got to meet a couple of their online professors.

“That opportunity was a lot of fun,” Boonseng said. “To actually meet their professors was really neat for them.”

Boonseng is originally from Thailand. He has been with Mizzou for 22 years, including time as an undergrad and graduate student. He has a Ph.D. in Information Science and Learning Technologies from MU.

Boonseng was a high school exchange student in Orlando, Florida. He found his way to Mizzou shortly thereafter.

“It was really hot in Orlando,” Boonseng said. “I wanted to see some snow. I had never seen snow. I randomly found Mizzou. I took a Greyhound bus here when I was 17, and I’ve loved every minute of it.”

Boonseng is hopeful that his past experiences can help the current overseas high school students.

“Just think about when you were 16,” he said. “I know when I was that age, I was just playing around. These kids already have a great start. They’re already learning about potential career fields.”

Asnan has a similar experience. She is from Malaysia and has been at Mizzou for three years, graduating with a psychology degree two months ago.

“People in my country always ask why I went to the Midwest,” she said. “They want to know why I didn’t go to Los Angeles or New York. I didn’t want to do what everyone else was doing. I wanted to try something else, do something different.

“I don’t regret this decision at all. It’s been a great one.”

After having enjoyed the first program immensely, Boonseng and Asnan are hoping to bring even more Mizzou K-12 students to the MU campus next year.