Since moving to the South Farm Research Center in January… Expand ▸

A lot can happen in a year. Just ask Donna Brandt and Russell Dresbach, who run the Soil Health Assessment Center at the South Farm Research Center in Columbia. A year ago, Brandt and Dresbach relied on the help of four student workers (two graduate students, two undergraduate students) to help them work with the soil samples stacked in tall rows as the SHAC, as it’s called, made the move from its previous home in the College of Engineering’s Lafferre Hall to its current location in January 2015. It was a relatively quiet operation, with the smell of sawdust lingering in the air. 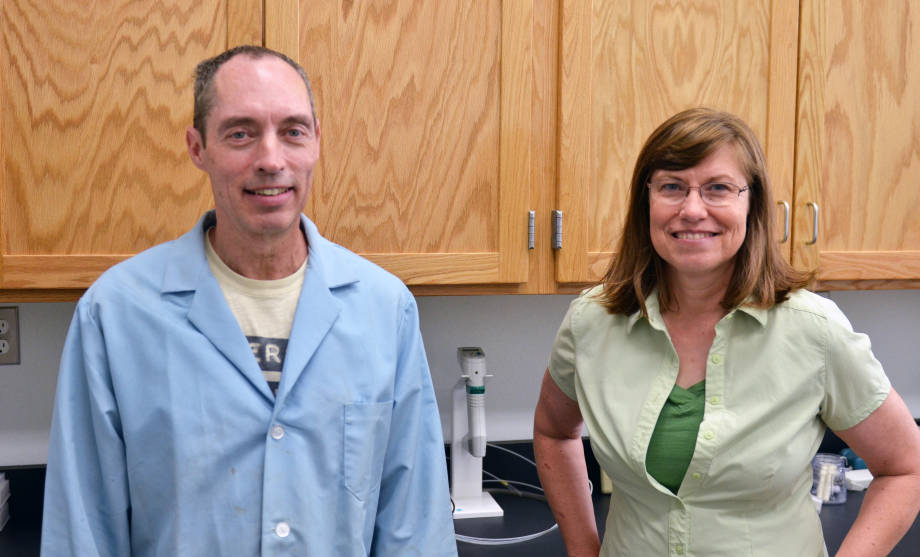 Russell Dresbach and Donna Brandt oversee the operations of the Soil Health Assessment Center at the South Farm Research Center.

Fast forward to present day. The center now has all of its equipment, including some machinery that allows it to provide phospholipid fatty acid analysis — a test that is still rare on the national scope but gaining popularity by the day.

The building is now alive with sounds as a team of 20 people — including four part-time non-student workers —  go to and fro from various testing stations that can analyze factors such as aggregate stability, particle size, active carbon, pH levels, organic matter composition (compared to mineral matter) and overall microbial activity.

The workforce includes students in places such as the department of soil, environmental and atmospheric sciences of the School of Natural Resources and the chemistry department, who are gaining experiences related to their majors.

Near the front of the center, a machine that shakes up soil samples makes the most noise as Brandt walks by it. “There’s a lot of things that need to be shook up because we’re extracting so many things out of soil,” Brandt says over the rhythmic sound.

When Brandt or others on the staff need a little quiet space, they can just head to the meeting room that was recently added to the building. The center shares the freshly completed space, which also includes a kitchen area, with the Missouri Agricultural Experiment Station field operations team located on the side of the new space. 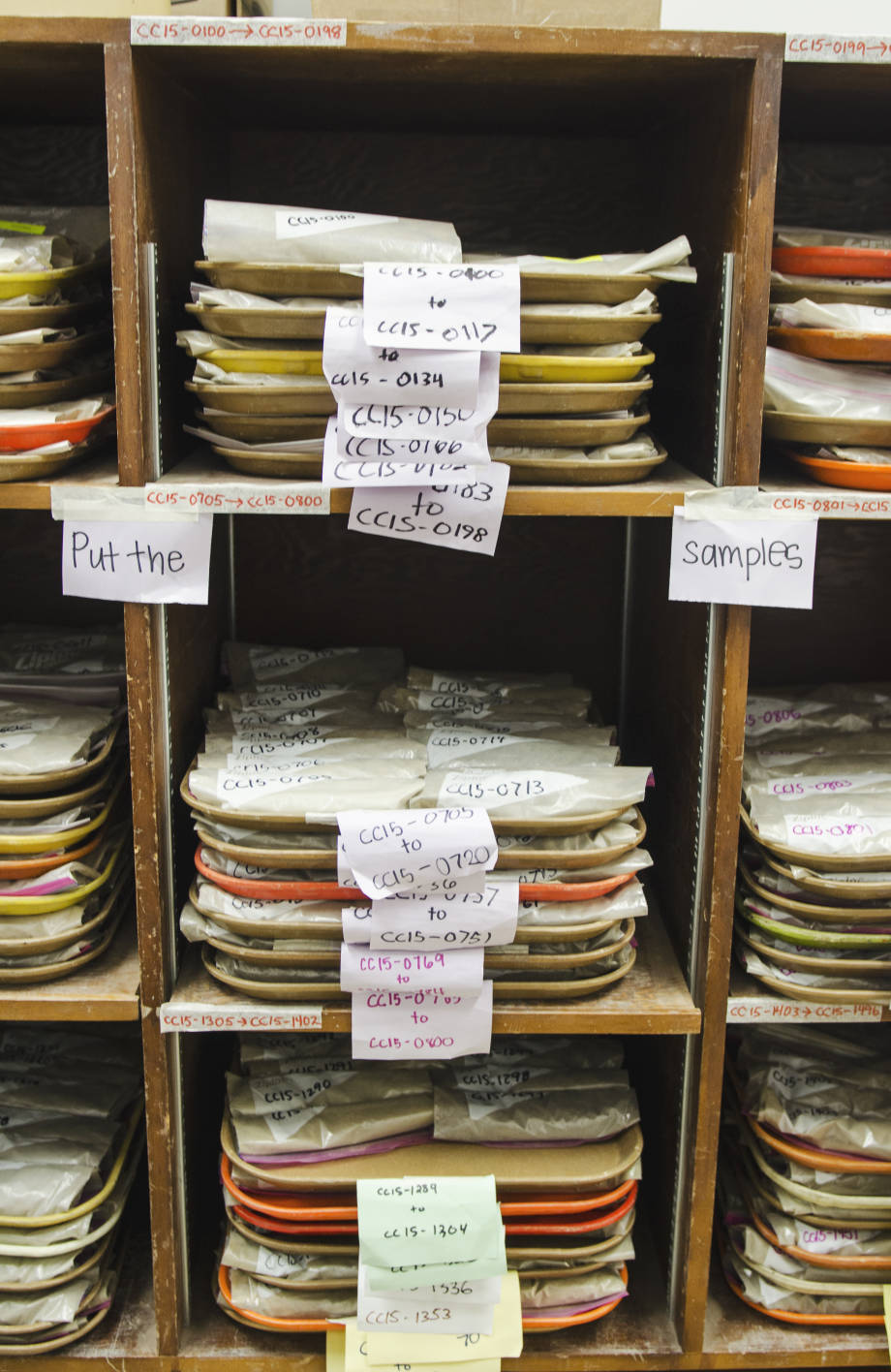 A side door from the new room reveals a section of the building that serves as a reminder of its origins, when the venue had a scant plywood frame with walls covered with visible insulation. At one point the building housed soybean research and storage items. The same structure also was home of the studio for local media personality Paul Pepper’s now-defunct TV show on KOMU, “Pepper & Friends,” Brandt says.

Was this transformation hard to imagine when they first started moving equipment into the building 18 months ago? “I don’t know if it has hard to imagine,” Brandt says. “I think we imagined it. It’s just that imagining is the quick part. It’s just getting everything step-by-step that is harder.

“It was sort of a balance between moving things over and having things constructed. It was very gradual as we couldn’t move everything over because we had to have a finished space to some extent.”

The new room will be used mainly for training purposes. Part of that training will focus on helping the center’s own staff — who became a “complete crew” with some recent hires earlier this summer, Dresbach says — learn how to conduct all of the tests available. Other training time will go to teaching agents from MU Extension and other representatives on the local, state and national levels about how to help farmers interpret the soil samples.

Now that all of the physical structures have now been constructed, this second kind of training represents a new frontier for the soil center: establishing a Missouri database for the new collection of statewide health reports on cover crops that have been generated as part of the start of the Missouri Parks, Soils & Water Sales Tax initiative.

The tax, which also helps fund maintenance of state parks, provides partial funding for a cost-share program run by the Missouri Department of Natural Resources. Starting a year ago, the DNR made it mandatory for farmers to conduct annual comprehensive testing using the center’s services to chart improvement in soil quality. In many cases, farmers have never seen the results of these kinds of testing before.

In late June, the center had completed the testing on all of the 1,732 samples that started to arrive the previous July. The next step is to generate reports farmers can understand, based on recommendations from the DNR and the USDA Agricultural Research Service. 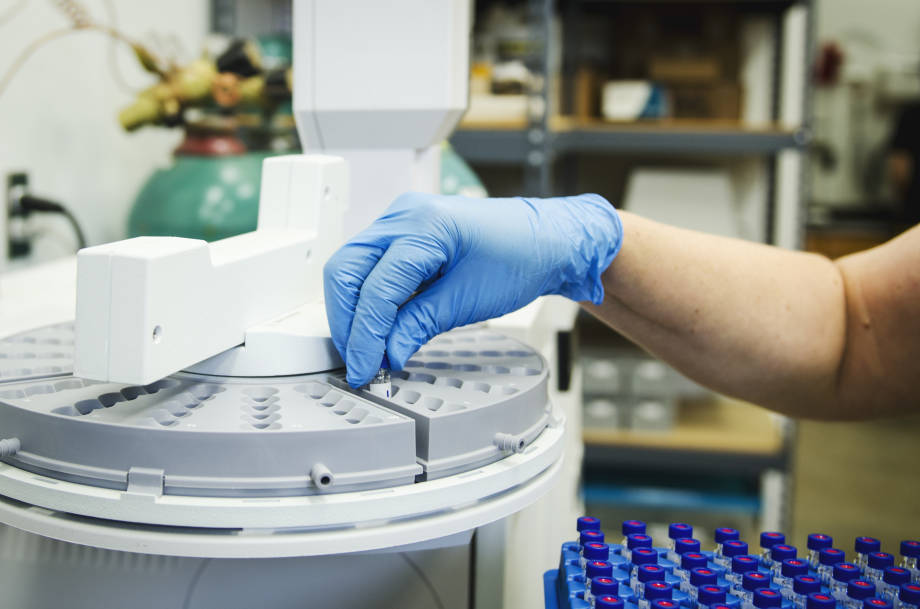 “We have to build a database before we have anything to compare the samples to,” Dresbach says. In the future, the hope is that the database will provide instant comparative analysis for the state’s different soil types.

Brandt holds a sample page from a report. This one happens to talk about water stable aggregates (WSA). The page explains what it is and why it’s important, management options to consider, benefits of well aggregated soil and a chart that shows the percentages of WSA of six samples from that particular farmer along with the county and state averages for comparison.

One of the first pieces of equipment that made the move from Lafferre Hall was a gas chromatograph machine used for the PFLA testing. For years, the center has been a leader in this particular type of testing. Part of the center’s workload involves conducting PFLA tests on soil samples from around the country on the behalf of the National Resources Conservation Service.

By looking at how many phospholipids are currently or had been in a soil sample and how many amounts of each, the results represent a particular soil sample’s fingerprint, Brandt says. That fingerprint can be used to determine the best choice of soil treatment.

“You’re getting a soup out of the soil,” she says “All of the microbes have been combined, but you can still look at the different proportions.”