s drought and heat drifted into the minds of agriculture and wildlife specialists across the country, researchers at the University of Missouri traveled to Capitol Hill and South Korea to raise awareness on what can be done to protect fish from climate change in the near future.

In a collaborative effort with the U.S. Geological Survey and the American Fisheries Society, a faculty member at the University of Missouri College of Agriculture, Food and Natural Resources presented research on inland fish and climate change to congressional staff on June 13.

“The goal of the two-hour briefing was to raise awareness, to give Congress these bullet points and take home messages from the research so that they can learn a little bit more about climate change and how it affects fish,” said Craig Paukert, who serves as one of the three associate cooperative professors that make up the USGS Missouri Cooperative Fish and Wildlife Research Unit Faculty.

Paukert was co-author on the four “flagship” research papers presented that the American Fisheries Society will publish in the special July 2016 issue of Fisheries, an overview of climate change and how it affects inland fish.

“Thanks to this synthesis, we can see the effects of climate change on inland fish are no longer just future speculation, but today’s facts, with real economic, social, and ecological impacts,” said Doug Austen, executive director of the American Fisheries Society and publisher of Fisheries magazine, in a USGS press release. “Now that trends are being revealed, we can start to tease apart the various stressors on inland fish and invest in conservation and research where these programs will really make a difference in both the short and long term.”

Just two weeks before, Paukert and Jodi Whittier, assistant research professor of fisheries and wildlife at the School of Natural Resources, traveled to Busan, South Korea, for the 7th World Fisheries Congress held May 23-27. The event occurs every four years and hosts fisheries professionals in academics and agencies from around the world. Both attendees presented research on climate change and inland fish at the conference hosted by the World Council of Fisheries Societies.

Collaborating for a better future

Last year, 27 fish experts across North America met in Bozeman, Montana, at the Northern Rocky Mountain Science Center for a workshop titled “The Effects of Climate Change on Fish and Fisheries.” Paukert and James Whitney, a former postdoctoral researcher at MU now at Pittsburg State University in Kansas, played a prominent role in planning the event. 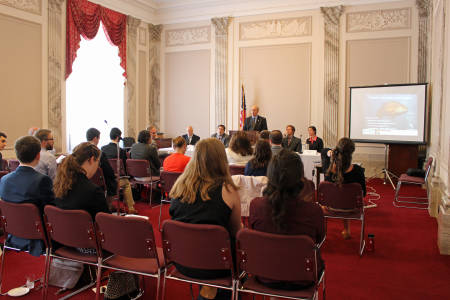 Discussions held during the workshop developed into the four papers presented to congressional staff on Capitol Hill. The papers zoned in on four categories concerning climate change and inland fish: the physiological impacts; effects on populations and assemblages; how recreational anglers will react and have already; and how fisheries management can address climate change now.

The lead authors of each of the papers presented their research to congressional staffers and, prior to the presentations, Paukert and USGS Research Biologist Abigail Lynch did a private briefing with Jennifer Gimbel, the U.S. Department of the Interior’s principal deputy assistant secretary for water and science. The presenting authors were Paukert, Whitney, Lynch and Ontario Ministry of Natural Resources Research Scientist Len Hunt.

Paukert was the lead author on the paper examining how fisheries management can adapt to changes in climate change and have already. The paper, titled “Adapting Inland Fisheries Management in a Changing Climate,” focused on developing resiliency in management practices, managing ecosystems and habitats, collaboration and monitoring and managing for long-term change.

“This was my first time doing a congressional briefing, and it was very different,” Paukert said. “You don’t go into the details of the science during the presentation. Instead, you focus on the take-home messages.”

‘It’s not all doom and gloom’

When working on his research, Paukert took an approach that went against the mainstream attitudes toward climate change.

“What drew me more to climate change research in the first place was that a lot of it was doom and gloom, or ‘We just don’t know what is going to happen,’” he said. “I found that it wasn’t encouraging at all. What I really wanted to emphasize was that it’s not all doom and gloom.”

Paukert said that climate change is definitely something that researchers are talking about, but not necessarily on an inland fish perspective dealing with fish—such as catfish, bluegill or bass—and in regards to building resilient populations and management practices.

According to Paukert, not many researchers look at management practices, non-game fish or warm water fish to examine how they correlate to climate change. Most climate change research on inland fish involves trout.

“The reason for that is because trout prefer cold water,” Paukert said. “They’re the low-hanging fruit to study because the water temperature is going to warm.”“It’s talked about as ‘We need to do more,’ but there’s actually not a lot of research on what we can do, particularly on the inland side.”
―Craig Paukert

Paukert’s primary research paper focused on the tools that agencies often already use for managing fish populations and habitat.

“Planting trees in the corridor of a stream to provide shading, that’s an action that a manager with agencies like the U.S. Fish and Wildlife Service or the Missouri Department of Conservation or a local land owner can do now,” Paukert said.

These commonly used methods can counter aspects of climate change like raising water temperatures projected in certain bodies of water.

“Managers like agency biologists are good at managing fish populations,” Paukert said. “That’s what their job is. They already have the tools in their toolkit to do some of these actions to help fish in the face of climate change. The question is, where do they need to this? What locations?” 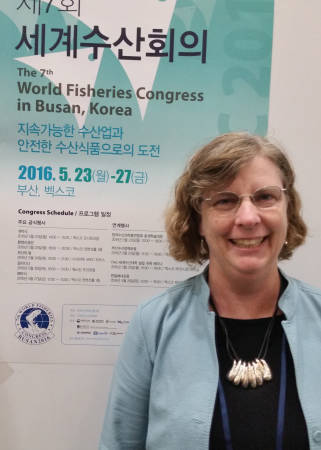 Going against the current

Both Paukert and Whittier attended the World Fisheries Congress year for the third time. Whittier is not directly involved in Paukert’s research for Fisheries but presented her own research on climate change at the conference.

Whittier presented research making projections of what will happen to introduced and native fish species in the Colorado River over the next 100 years.

The Colorado River is an arid, warm water river system where introduced species outnumber native fish 2-to-1. Developing long-term projections is often a challenge because many factors affect data, particularly human use.

“The idea is that hopefully we can modify those predictions with incorporating additional information and altering the ways we use water,” Whittier said. “Maybe in that area, people are going to come up with more efficient systems, switch to different crops that aren’t so water needy or determine that you just can’t do agriculture in the desert.”

The Colorado River is especially significant considering that it is the main water source to the Southwest, an area plagued by drought. Although the river travels all the way to the Gulf of California, it often never makes it.

“The water is totally used up.” Whittier said. “When you think of the Colorado River and see pictures of how big it is, it’s hard to imagine it as completely used up, but most years it is.”

One common connection both Paukert and Whittier found while attending the global conference was that research tends to focus on marine fisheries, but in recent years Paukert and others have held a symposium to create more awareness of inland fisheries.

“People often think that oceans are the primary food source globally, but actually on a global scale inland fish are very important,” Paukert said. “But they’re not reported on a lot.”

On May 22, the day before the conference, Paukert and some colleagues from the USGS held an invitational-only meeting with 13 inland fish experts from around the globe. The topic of the meeting was to discuss the possibility of collaborating to produce research about how climate change affects fish on a global scale.

“The agreement from those biologists was that it’s going to be hard, but it’s very much worth trying,” Paukert said. “And we’re going to run into some challenges there, mainly with the lack of reporting, but that in itself is worth reporting. Maybe in the end, it will be a call to action that we really do need more reporting of these fishes.” 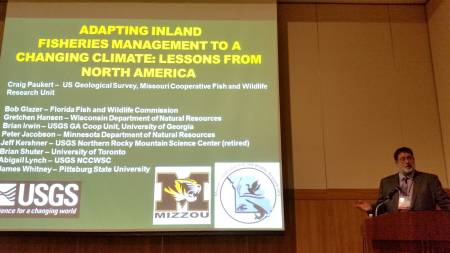 One challenge discussed during that meeting was the need for more collaboration between scientists to help with research in developing countries. Paukert said that in smaller countries fisheries are managed differently under an agricultural livestock programs and have much smaller staffs.

Overall, the conference and the small meeting before held a positive outlook on the potential of examining climate change effects on fisheries internationally.

“Given that we’re all a group of professional academics or fisheries biologists, there’s a general interest and willingness to help,” Paukert said. “It’s interesting that when I talked to groups at the meeting, there’s no territorial boundaries. People aren’t protecting their little area. They want people to come over and help them.”

Along with taking a global approach to their recent research, Paukert and his colleagues plan to host an event for children at the Smithsonian Institution in Washington, D.C. this summer to educate the future generation about fish and how to deal with the upcoming issue of climate change.