Steve Borgelt's preferred mode of transportation is by… Expand ▸

“I really like ground travel,” Borgelt said. “I like to see things, and I don’t really like to drive that much.  Some people may not like the train-travel style, but if I have some time, it’s the way I like to go.”

There are very few Amtrak routes that Borgelt hasn’t traveled. He caught the train-riding bug more than 20 years ago.

“On a regular basis, we used to have a professional technical meeting in Chicago,” Borgelt said. “It’s a long drive and it was hardly worth it to fly – so I started to take a train. I left from Jefferson City and went to St. Louis. I then took a train to Chicago.

“I really enjoyed it and decided that’s the way I wanted to travel if I could.”

Borgelt, an associate professor and the director of undergraduate studies in the bioengineering department, started taking overnight trips about 12 years ago. Once he started with those trips, he couldn’t stop. 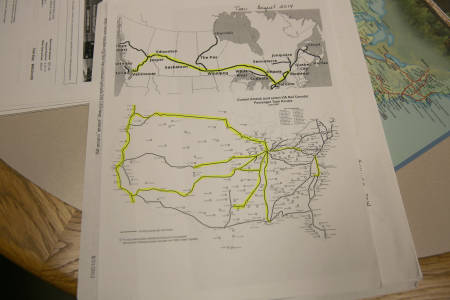 This map shows the Amtrak routes across the United States. The highlighted routes are ones Borgelt has traveled on.

In 2009, he went from Chicago to Whitefish, Montana – a 30-hour trip on the route to Seattle – the longest trip that he’d ever taken.

“After that trip, I was hooked,” Borgelt said.

Traveling by train can be challenging at times. Amtrak routes don’t run through every state. Borgelt said Amtrak doesn’t actually own any rails, either. Freight companies own the rails – and they have the right-of-way – which can cause delays.

“Another challenge is that there are certain routes that you would like to take that aren’t as easy,” Borgelt said. “If you want to go to Denver, you have to go to Chicago or somewhere in Iowa then over to Denver.

“There are a lot of people who think they’ll get bored or express concern about how long it takes. Honestly, if you’re in a hurry, it’s not the way to travel. For me, though, when I have time, this is so relaxing.”

Borgelt’s longest journey happened in 2014. He started in San Diego and ended in Montreal. He stopped in San Francisco and Seattle before busing to Vancouver. He then traveled across Canada.

Borgelt said he takes one to two long train rides each year. His favorite spot is Whitefish, Montana. He’s traveled there five of the past six years.

“I really like Montana,” Borgelt said. “I’ll even rent a car and drive for several days around the state, to areas not near the train. The upper reaches of the Missouri River are of special interest.”

Chicago is one of the biggest Amtrak hubs in the country. However, Borgelt said not all of the best stations are in larger cities. There is one in La Plata, Missouri, a town of less than 1,500.

Borgelt has been an MU faculty member since 1989. He graduated with bachelors and master’s degrees from Mizzou and earned his PhD from Texas A&M University. Borgelt grew up east of Columbia and lives on the farm that he grew up on. His father, mother and brother also graduated from MU.

Borgelt is flying out to Seattle later this summer. He already has his flight to Seattle booked. His route home isn’t set in stone, however.

“Sometimes, after a long day, it’s nice to sit down and dream about where I’m going to head next,” he said.