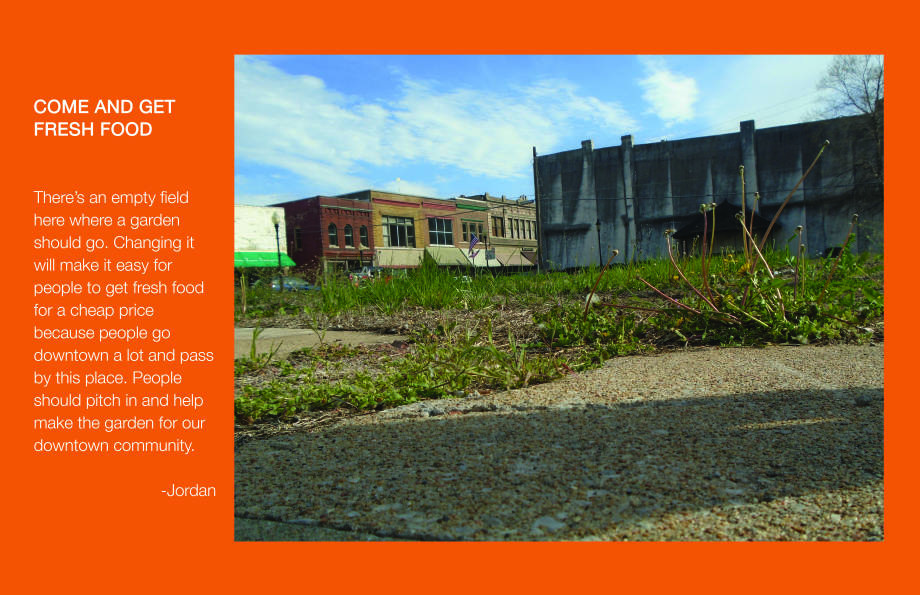 With a photo and the statement on its left side shown above, a student from Kansas City named Jordan made her voice heard to her community. It is just one of several submissions received over the past few months through the Eat Smart in Parks (ESIP) photovoice project. ESIP is a statewide program to promote healthier eating options in and around Missouri’s state and local parks. 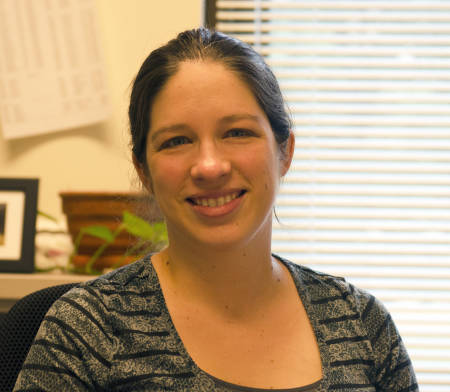 After working with students ranging from grade school to high school age from Kansas City, Eldon and Sedalia, more than 50 submissions were presented at three different receptions. Each submission included a photo taken by a student with a corresponding caption about what issues the photo brings to light for that student.

The first reception took place at the Southeast Community Center March 23 in Kansas City, where students from both Marlborough and Brush Creek community centers created a narrative about areas in high need of healthy eating and living outlets. Similar events were also held at the start of Eldon Farmers’ Market season at Rock Island Park May 6 and at the Sedalia Community Center May 19.

“In terms of what the youth saw, it was pretty neat to see how perceptive they were of challenges and issues in their community,” said Sonja Wilhelm Stanis, associate professor in the department of parks, recreation and tourism in the School of Natural Resources. She served as the principal investigator for surveys and other research conducted around the photovoice projects through a one-year grant from the North Central Nutrition Education Center of Excellence (NC-NECE). 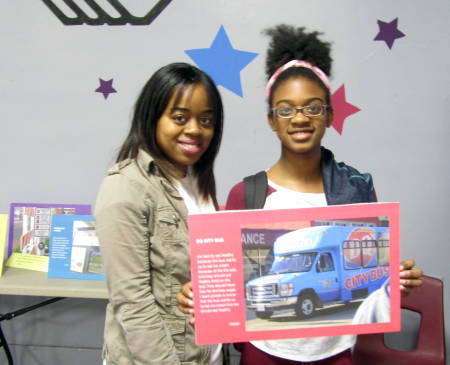 Daijah Blanch poses with her photovoice submission and her mother, Latrice Alexander, at the photovoice reception in Sedalia May 19. Photo courtesy of Natalie Hampton.

Wilhelm Stanis, along with other members of the University of Missouri community, worked closely with the youth in the three communities through a series of sessions in which the students were introduced to the project, took photos in and around their community centers, wrote captions for their photos and then presented them to their communities during the receptions.

The other MU team members included Cindy Deblauw, an MU Extension associate in the department of nutrition and exercise physiology who is also director of ESIP; Natalie Hamilton, coordinator of the Health Communication Research Center at the MU School of Journalism; and Kimberly Keller, assistant research professor, nutrition and exercise physiology.

In all three communities, a chorus of young voices tended to gravitate toward one of three themes:

The first theme tended to carry the most weight as a stream of photos and captions came in showing how much fast food restaurants and other vendors of unhealthy foods had been ingrained into the respective communities. 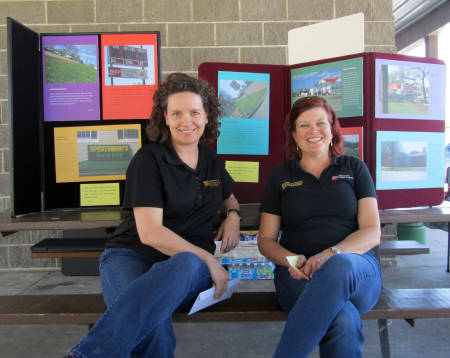 “It was this realization that you look around here and it’s all unhealthy,” Wilhelm Stanis added. “I think that’s what they really realized through the course of this project is what they’re being exposed to.”

In one of the centers, a young male student asked Deblauw why he and his fellow students had to take all of the pictures. “I said ‘I don’t see the things that you all see.’ And it’s true. The things that were striking to them were things I just sort of gloss over,” Deblauw said. “My adult mind isn’t thinking in the same way.”

One prime example of this took place in Eldon when a girl observed, from the top of a slide in Rock Island Park, that a church steeple and a McDonald’s sign were both clearly visible from any spot in town and around the same height. “Her perspective was they are equal because you can see them side by side. I was like ‘Wow. That’s impressive,’” said Michele Griswold, who serves as Capital Region Medical Center’s healthy communities coordinator for Eldon. “It was amazing, just hearing what the kids noticed from their perspective.”

Both Wilhelm Stanis and Hampton have experience using the photovoice medium for similar projects connecting youth to health initiatives. “It’s an increasingly popular technique to particularly work with youth in communities that don’t have a lot of voice in decision making,” Wilhelm Stanis said. Photovoice has traditionally been used with groups that have less power, Hampton added, “so I would say youth certainly fit into that category.” 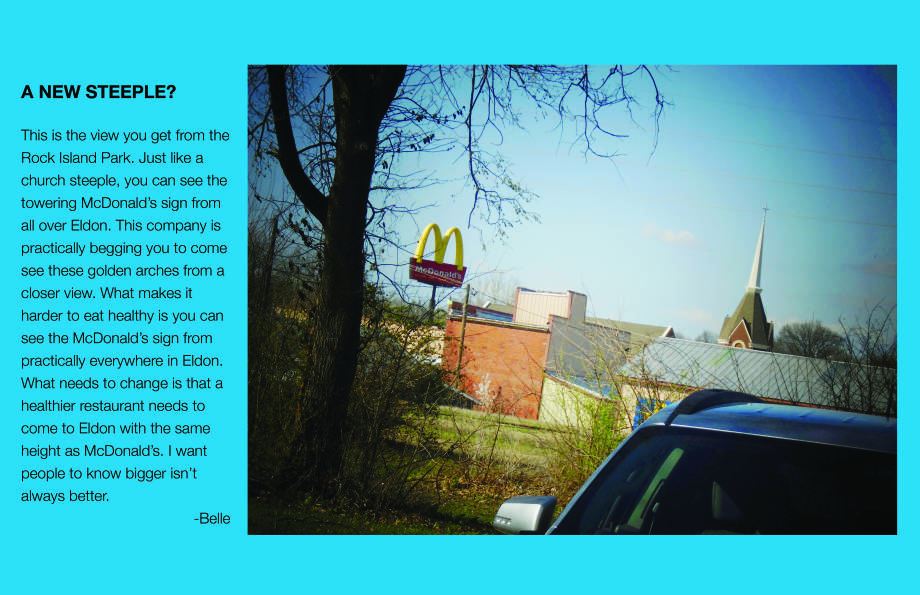 This photovoice submission from a student named Belle sparked many conversations at the photovoice reception in Eldon May 6. Image courtesy of Sonja Wilhelm Stanis.

One of the moments that stands out to Hampton took place during the photo-gathering stage when the students would walk around their communities, looking at everyday life through a camera lens. “When we go on these walks it really slows things down, so often when people are driving past there’s things they don’t notice, especially in the rural areas,” she said. “A lot of these youth have never walked anywhere around town before. So this gives them the opportunity to notice things that they normally wouldn’t notice.” 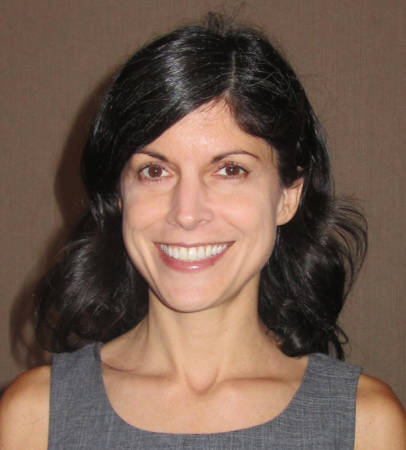 Ashli McGee, who serves as the recreation director at Brush Creek Community Center, said that when her students first started to explore the area around the center they began to develop “a better understanding of where they live does play a major part in how they eat… It took them a minute to get a grasp of the concept, but once they did they actually were interested as far as going out and walking in the neighborhood and being able to take pictures.”

Since its beginning in 2012, the Eat Smart in Parks program has worked directly with 12 communities to help promote healthier eating options at schools, parks and other city municipal facilities that have concession stands.

As Deblauw noted, though, the materials needed to start such initiatives are available to download for free on the program’s official site. The ESIP program began as a collaborative effort through members of the MU Extension, Missouri State Park and Recreation Association and the Missouri Council for Activity and Nutrition. 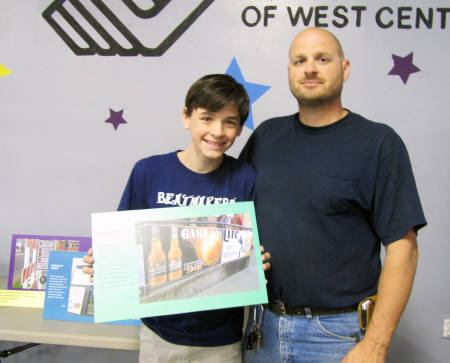 Aaron Bilbruck poses with his photovoice submission and his father, Caleb, at the photovoice reception in Sedalia May 19. Photo courtesy by Natalie Hampton.

In addition, Griswold and others involved in the Missouri Foundation for Health’s Healthy Communities grant action plan (which is funding the city’s recent healthy initiatives) have made a commitment to making Rock Island Park Eldon’s “healthy hub” by unveiling a new walking trail on the same day as the photovoice reception. The city’s next priority is to increase its walking and biking accessibility by adding more sidewalks and biking lanes. Griswold hopes that when school starts the same students who took part in the initial photovoice project can produce more photos and captions to see how to improve its overall pedestrian-friendly areas.

Wilhelm Stanis and the rest of the leadership team from MU were encouraged by the number of community leaders and policy makers who attended the receptions — including mayors, city administrators, city council members and school superintendents.

“I think they’re really excited about ideas and opportunities of places to make their environment for youth in and around parks healthier,” Wilhelm Stanis said. “They’re seeing these issues raised and ideas that can be addressed.”

All of the submissions will be included in a report that will be turned into NC-NECE — and into an academic journal as well — that will be written up later in the year. It will include the material from surveys taken both with the students before and after the project and with community members at the receptions. The hope is that the projects can be displayed somewhere with high visibility to keep this particular topic fresh on the collective conscience of a community.

McGee said that spreading the words about healthier eating is a tough battle, but one that must be waged. “A lot of kids aren’t interested in what’s healthy for them because of the surroundings that they’re in. They accept what’s handed to them,” she said, “but we can say ‘We need healthier things.’” 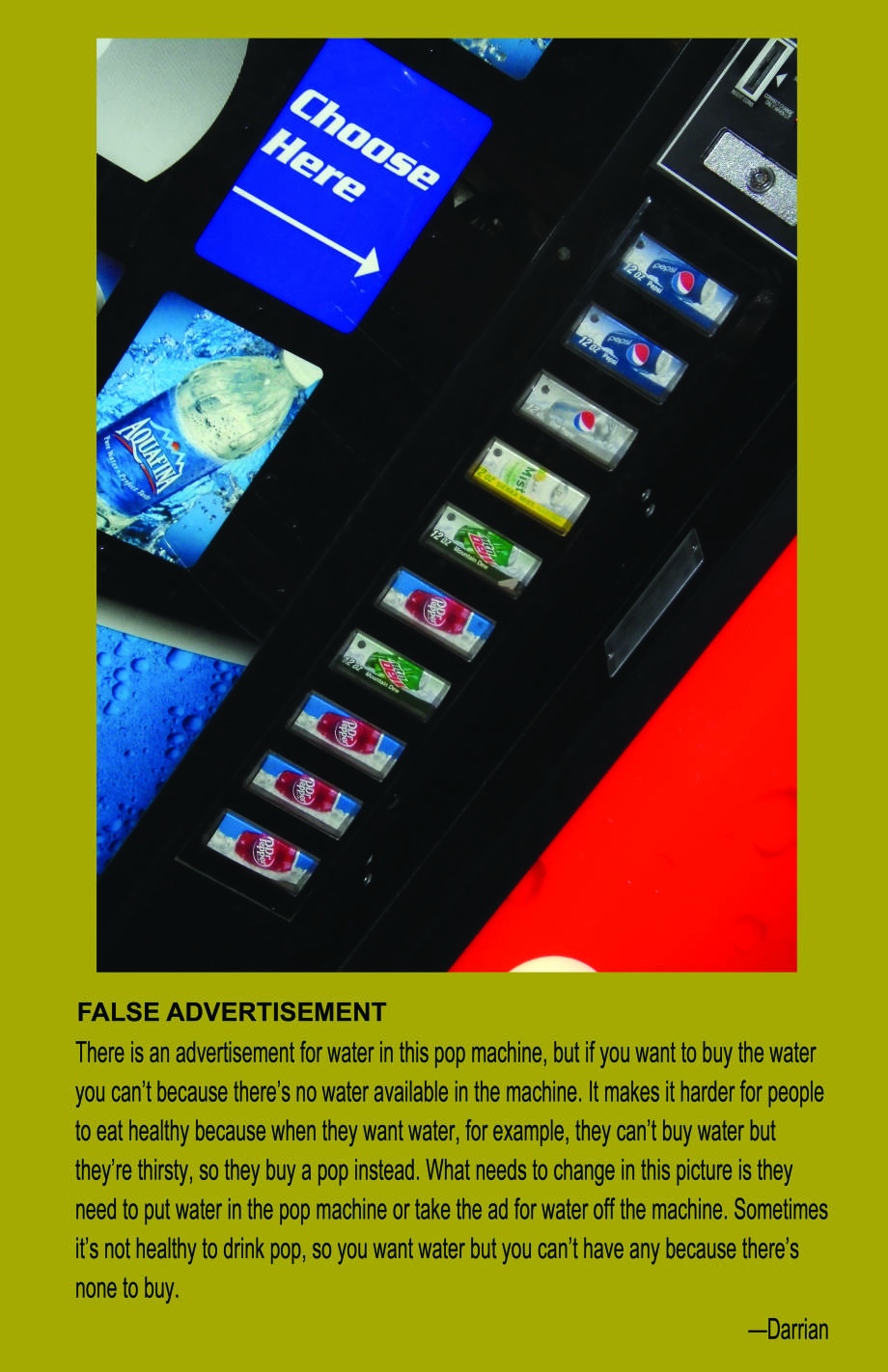