Tony Lupo, a University of Missouri professor of atmospheric sciences, had one word to describe the rather hot and dry month of June: unusual.

“When you have a strong El Niño like we did this winter, the summers are hot and dry,” Lupo said. “That heat is usually upfront, in the months of June and July.”

Lupo said his team predicted the hot June temperatures back in January. El Niño was very strong this past winter, leading to warmer conditions over the months of December, January and February. The warmer weather continued into June.

Nineteen of the first 27 days of the month hit the 90-degree mark in Columbia, with only 1.09 inches of rain falling during that timeframe. The average temperature for the early part of June is normally in the lower- to mid-80s. The average rainfall for June is nearly four inches.

Those figures come from the Columbia Regional Airport.

Lupo added that the 19 days that eclipsed the 90-degree mark all came in a row – another unusual happening.

“We’re definitely getting into unusual territory,” Lupo said. “We haven’t hit triple digits, but we had consistent, high temperatures.”

The weather is something that farmers and livestock owners understand they have no control over – and can turn at the drop of a hat. Cooler temperatures and more rainfall can always be right around the corner.

Still, it’s important for those farmers and livestock owners to be aware of and prepared for the dangers of hot and dry weather.

When a combination of heat and little rainfall occurs, there is always a chance of drought. Pat Guinan, associate professor of climatology at MU Extension and state climatologist, said there have been a few visible signs from the current dry period.

“Corn leaves are rolling in the afternoon and pointing upright – they’re looking like pineapple fields,” Guinan said. “Forages have stopped growing and pastures are drying up. Lawns are brown and creeks and streams are running low.”

Guinan also mentioned the extra water used for watering lawns in parts of Columbia have led to boil-water advisories.

“It’s important to note, that when drought persists, like it did in 2012, impacts increase,” he said. “Impacts from a drought that occurs during much of the growing season can be widespread and include economic, environmental and social repercussions for many sectors. The 2012 drought is a great example of this.”

Most of Missouri faced extreme drought conditions in 2012.

“Nobody knows a drought better than the person living in it,” Guinan said in the release. 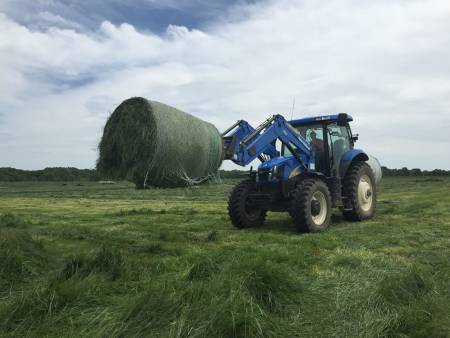 “When dairy cattle get hot, they have to compensate for that,” Poock said. “They spend less time eating, which can lead to a reduction in milk production. They also spend more time standing up because it’s easier to breathe heavy. Standing up all of the time can lead to an increase in lameness. Conception rates can also drop when it’s extremely hot. Less cows get pregnant, and for the ones that do, there is an increase in the number of loss pregnancies.”

Shade and water are vital for livestock during the hot weather. The Foremost Dairy Research Center in Columbia has several fans in their main barn, with soakers that wet the cows every 15 minutes. The goal is to wet the dairy cattle and let the fans cool them.

David Davis, the superintendent of the Forage Systems Research Center in Linneus said he wants to make sure their cattle have easy access to water.

“We put them in pastures with shade,” he said. “We also have a couple of portable shade structures that we use. We make sure the cattle have clean water and unobstructed access to water. The water gets checked a couple of times per day. When we need to work cattle or treat sick cattle, we try to get it done in the early morning before it gets hot. If the cattle need to be moved to other pastures, we move them in the early morning to avoid the excessive heat and we move them slowly. Weekend help also checks the water a couple of times per day.”

Poock said they also change some of the feeding patterns.

“We try to increase the fat content,” Poock said. “You have to be careful not to overdo it, though. We adjust the ration, with a focus on giving them more energy.”

Most of the University of Missouri College of Agriculture, Food and Natural Resources Agricultural Research Centers have a handful of farm workers in charge of the many tasks at the Centers. It’s important to keep an eye on them as they work in the elements.

“There is not much we can do about the hot weather,” said Dana Harder, superintendent of the Greenley Research Center in Novelty. “We try to complete all the outside work during the morning hours and prioritize less intensive activities for the afternoons to prevent heat stress.”

Davis said he makes sure that his workers take breaks when needed.

“We tell our workers to take a jug of water with them to the field,” Davis said. “If they feel hot, we want them to take a break, preferably inside. We tell them not to overdo things.”

Low rainfall totals can also affect the grass that cattle graze on. Harder said they recently finished haying. He’s hoping he doesn’t have to get into that hay early, though.

“We anticipate the hay quality to be higher this year since it was put up timely due to weather,” Harder said. “Hopefully we get a rain soon so the cattle don’t run out of grass in the pasture and we have to start feeding hay early.” 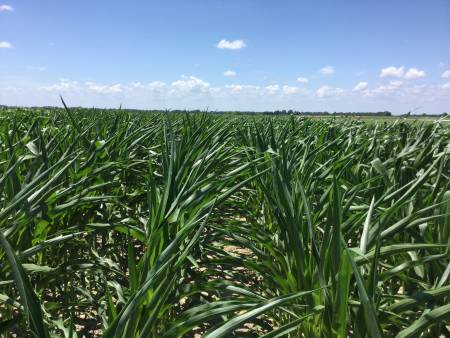 “We have fired up the irrigation last week on the row crops and installed some additional water lines to sub-irrigate,” Harder said.

Heat stress is not good for crops, either. Greg Luce, an adjunct instructor with the Division of Plant Sciences, said the most critical time for heat stress in corn is 10 days before pollination through 10 days after. Hot temperatures can have a negative effect on corn yield during pollination when there is little moisture present.

“The heat certainly puts stress on the plant,” Luce said. “Corn is a resilient plant, though. It’s way too early to just throw in the towel. If we can get a little rain, it’s amazing how things can change.”

Luce said that preparing for the weather is very difficult. However, there are a few ways to battle Mother Nature. Utilizing the most adapted corn hybrids and maturities of hybrids for your environment can help fight the ever-changing weather. Luce added that those hybrids continually improve in handling heat and drought conditions and breeders have made a lot of progress in those areas.

“You can’t outguess Mother Nature,” Luce said. “She’ll always throw you a curveball when you’re not expecting it.”