The University of Missouri College of Agriculture, Food and Natural Resources Agricultural Research Centers continue to be advocates for monarch butterflies and other pollinators.

Thirteen Research Centers planted monarch waystations, beginning in late January. The waystations include milkweed and other nectar sources that benefit all pollinators.

Waystation plantings took place from January to April. The Research Centers are spread across the state, so each planting was done when time allowed.

“With a lot of these seeds, it would be better to get them in over the winter,” Walter said. “The cold and damp conditions help the seeds break dormancy.”

Plots range in size from a half of an acre to six acres. As a whole, a total of 22 acres of pollinator habitat were planted across the state at the Research Centers. 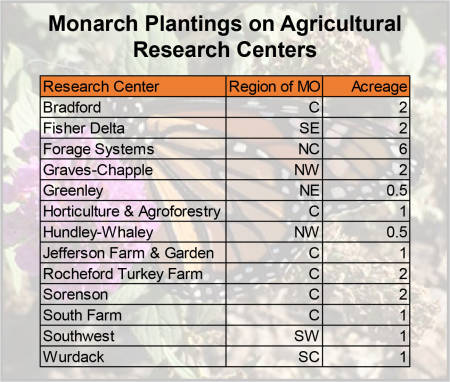 “Our Research Centers are really the perfect avenue to plant these waystations,” said Bruce Burdick, superintendent of the Hundley-Whaley Research Center in Albany. “These habitats are very important, so it’s great that we can give the public first-hand knowledge of how they function.”

The Research Centers are currently focused on keeping grass out of the waystations.

“Grass is competitive for moisture and nutrients,” Walter said. “We’re going to start doing some grass control over the summer. We’re mostly trying to grow broadleaf weeds for pollinators. Those weeds are problematic in your crop fields but are vital for pollinators.”

The monarch population has seen a steady decline during the past two decades. Many factors have contributed to that decline, including a loss of habitat. Farmers have fought against weeds for years, trying to keep them from stealing water and other nutrients from their crops. Unfortunately, some of those weeds are vital for monarchs and other pollinators.

“We have these indicator species and monarchs are one of them,” Walter said. “They’re highly visible insects that reflect, in a broader sense, what’s going on in the world of pollinators. When we see a decline, it shows that there may be some issues with habitat or reproduction. If it’s occurring in monarch populations, there’s a chance it’s occurring in other pollinator populations that aren’t as visible.”

Monarchs are not the best pollinators by themselves. However, they share that space with other pollinators. Milkweed and other nectar sources provide much needed energy for those pollinators.

“Pollinators are very important to Missouri and agriculture in general,” said David Cope, superintendent of the Southwest Research Center in Mt. Vernon. “It’s important for us to do our part and keep the ecosystem in balance. 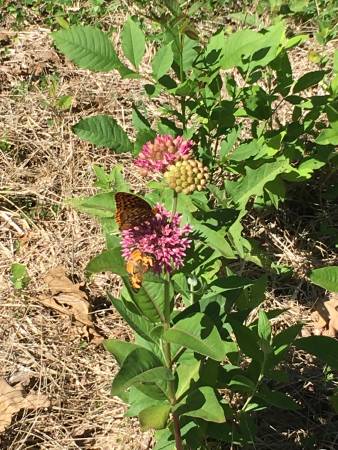 “Our Research Centers have the space, so it’s exciting that we’re doing something to help pollinators.”

Monarchs winter in Mexico and the southern United States. They begin their spring migration north in March, laying eggs in the southern United States. That first generation, born in the south, then heads north to lay eggs around April and May. Three to four more generations follow, with the final generation migrating back to Mexico from the north. The final generation making the trip to Mexico has never done so before. It’s an instinctive action.

Monarchs started showing up in Missouri in mid-April this year.

“Their migratory patterns differ every year,” Walter said. “Climate, rainfall and plant development are all things that will influence and impact their migration.”

Research Centers planted the waystations for demonstration and education purposes – for the time being. Walter recently traveled to Hundley-Whaley to discuss pollinators with the local Rotary Club, an example of one of the ways that the Research Centers reach out to the public about the importance of the monarchs and pollinators.

“Our waystation is right by our main building,” Burdick said about the Hundley-Whaley waystation. “Once it is fully established, we’ll have an area where anyone can walk through and see what pollinators are all about. We’ll identify the plants and showcase how important pollinators are.

“These waystations are showing that our Research Centers are on the front edge of research. This is a topic that we want to stay on top of and we’re doing so.”