As a beef geneticist and extension specialist, Jared Decker spends a lot of time discussing issues and challenges with Missouri producers, farmers and ranchers.

One of those challenges is finding the right cattle for different environments. Cattle that are poorly adapted to their environment don’t perform as well as those that are comfortable with their surroundings.

“We’re trying to create genetic and genomic predictions that will allow producers, farmers and ranchers to identify the cattle that are going to perform the best in their environment,” said Decker, who is also an assistant professor with the University of Missouri Division of Animal Sciences. “If an animal is better adapted to its environment, it’s going to do a better job of efficiently using those resources. If an animal is coping with stress better, its welfare is going to be better.

“Beef producers sometimes just want to select the animal based on how it looked or how much it weighed at a certain time. The problem with that approach is now you have genetics and environment mixed together. Just using our eyes, we can’t tell if the animal is great because of its genetics or if the animal is great because of its environment. For the last 40 years, we’ve had tools, called EPDs and indexes, which separate the genetics and the environment. The selection decisions we make need to be based on the genetics.”

While Decker was developing his projects for 2015, the United States Department of Agriculture put out a call for proposals to address a global food security issue. That issues dealt with breeding and genomics of crops and livestock for local adaptation. 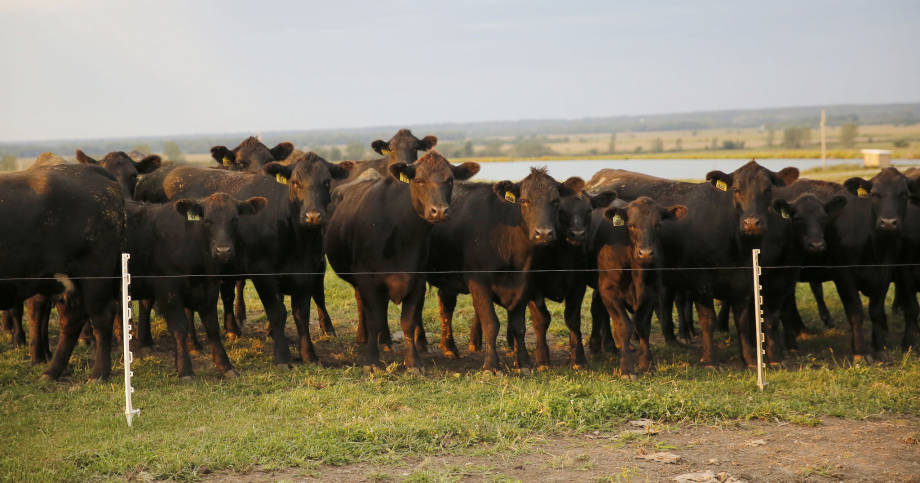 Decker will analyze data from nearly 170,000 cows for his new project.

Decker’s project seemed to be the perfect fit.

“As our ideas about how we would approach some of these challenges were being developed, the USDA released a call for proposals asking for something similar to what we were already thinking about doing,” Decker said. “The USDA wanted to use breeding and genomic approaches to identify stresses, mainly region-specific stresses, for agricultural production. They were looking at how we can use breeding and genomics to overcome some of those stressors.”

Decker applied for the grant in June 2015 with his project, “Identifying Local Adaptation and Creating Region-Specific Genomic Predictions in Beef Cattle.” He learned that he would be receiving a grant worth $3 million in October.

“To be honest, the three days or so after I found out I received the grant I was basically walking around in a stupor,” he said. “I was completely shocked. It was very humbling and made me realize that we’ve now been trusted with this resource. We have to go and deliver now. We have to make good on the things we said we would do.”

Decker’s project really gathered legs when he talked to beef producers, farmers and ranchers about fescue toxicosis. Nearly the entire state of Missouri is in the fescue belt, which also includes Tennessee, Kentucky and parts of Oklahoma, Arkansas, Mississippi, Alabama and Georgia.

“The fescue grass that we have here in Missouri has an endophyte, meaning it has a fungus that grows inside of it,” Decker said. “This fungus provides the plant greater resiliency against drought and other stresses that the plant faces. The drawback of this is that some strains of that fungus also produce a toxin. This toxin decreases the amount of food the animals eat. It decreases their appetite. It can decrease blood flow. Their hooves can get sore. Their tail switches can fall out. It decreases their performance, their growth, those type of things.”

Decker wanted to approach the fescue toxicosis problem from the cattle side. He said work has been done already on the crop side.

“All of these negatives of fescue, which is the predominant grass in Missouri, are concerning to beef producers,” Decker said. “They want their animals to be as efficient and profitable as possible. That got me thinking about what we could do from a beef cattle genetics standpoint to tackle this problem. The problem is already being tackled from a forage production standpoint. Instead of having toxic fescue, they can put in a novel fescue that isn’t toxic.”

Decker’s approach changed, too, as he started to think more about the project. Finding the right cattle to handle the fescue environment is where Decker began. He thought they could take a much broader approach, however. He wanted to find cattle well adapted to other environments – and figure out why that was so.

“The methods we would use to try to identify animals that were well adapted to a fescue environment, we could apply those same approaches to animals that are in the Gulf Coast, animals at high elevations, animals in humid climates, and so on,” Decker said. “That’s where the ideas for this project came from.”

“We’re partnering with several different breed associations,” Decker said. “Most of the data we’re analyzing is data that the farmers and ranchers that are part of those breed associations have been collecting over the last 30 years. The DNA data has been collected over the last six years or so. We’re excited to be partnering with them because hopefully that will allow us to take this research and have an impact in the industry sooner rather than later.

“I like to analyze data that is already existing. I want to find a new way to analyze it and find an answer to a different question.

All of the cattle at the Thompson Research Center in Spickard, Mo., will also be part of the project.

“As part of the project, we’ll genotype all of the cows at Thompson with a GGP-F250 chip,” Decker said. “What makes this chip different from previous SNP chips is usually we take the DNA markers and we evenly space them along the cattle chromosomes – kind of like mile markers along a highway. What we’ve done with this new F250 chip is we’ve said let’s put DNA markers in genes. Let’s put the DNA variants where we think there’s something functional happening in the DNA. Instead of these 250,000 DNA variances evenly spaced, they’re going to be concentrated into regions that we think are important.”

Beef geneticists analyze numerous pieces of data during their research. Decker’s group takes population genetics, or the history of populations, and uses genomic technology to better understand those histories. 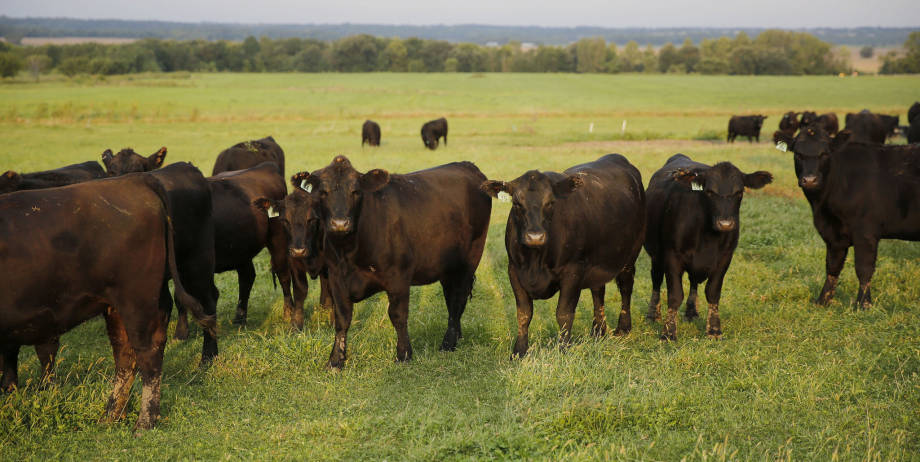 Cows from the Thompson Research Center will be featured in Decker’s project.

The project also will include an educational component. Decker said he would like to be able to provide beef producers with statistics and information that will make it easier for them to make solid decisions.

“We want to help farmers and ranchers, especially the next generation, understand and ultimately trust these practices and new technologies,” he said. “We want them to be able to use them to make better decisions, identify cattle that are going to work better for them, and be more profitable.

“We’re trying to put information out there to help farmers and ranchers make the best decisions possible.”

Decker added that he is hoping to have internship opportunities for students within the project. He would like to develop a curriculum for youth as well.

For producers, farmers and ranchers, Decker is mainly focused on just helping them out, especially with ever-changing technology. 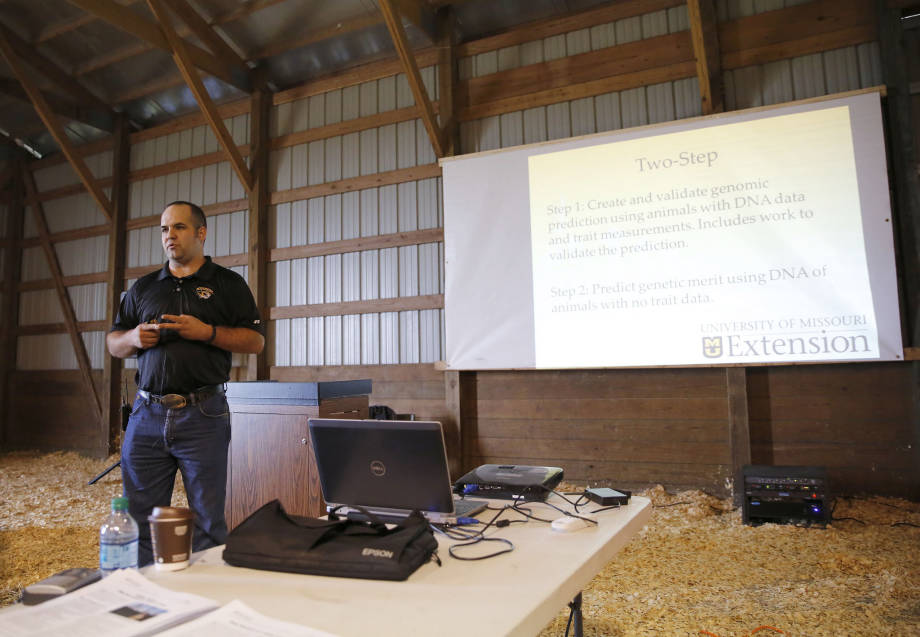 “Researchers who get involved with agriculture – they do so because they want to make a difference,” Decker said. “They want to do something to help producers, farmers and ranchers feed their neighbors and feed the world.

“At the end of the day, someone doesn’t have to understand how the technology works. Ultimately, they need know that the technology does work. If someone wanted me to explain how my cell phone worked, I wouldn’t even know where to begin. However, I know my cell phone does work because when I call my mom in New Mexico, I can hear her.”

Decker will collaborate with a handful of others on the project as well. Anna Ball, CAFNR associate professor and department chair of agricultural education and leadership, and Kristi Cammack, from the University of Wyoming, will work on the educational side of the project. Christopher Seabury, Texas A&M, will provide research help to Decker.

Decker said they are also putting an emphasis on being sustainable with the project.

“Sustainability has become a buzz word in the beef industry,” Decker said. “Different groups define it different ways. To me, sustainability is economic viability or profit; doing things efficiently in an environmentally responsible manner; and doing things in a socially accepted way, such as raising beef in a way that is acceptable to consumers. With this project, we’ll actually be able to tackle some of those areas of sustainability.”