Ed Schwitzky, the vice president of eCommerce at TPG Hotels & Resorts, acted as Professor-for-a-Day on March 15-17, providing students with insider knowledge of the hotel industry.

Schwitzky is a University of Missouri alum with a bachelor’s degree in psychology in May 1975 and a master’s in public and community service in December 1976. Since graduating from MU, Schwitzky has spent more than 30 years working in the hotel industry.

Schwitzky established a relationship with the College of Agriculture, Food and Natural Resources 10 years ago when he created a scholarship benefitting livestock judging students in honor of his late father. During the discourse surrounding that fund, Schwitzky agreed to guest lecture for the hospitality management department. Soon after he became acquainted with James Groves, now retired associate professor and adjunct instructor. 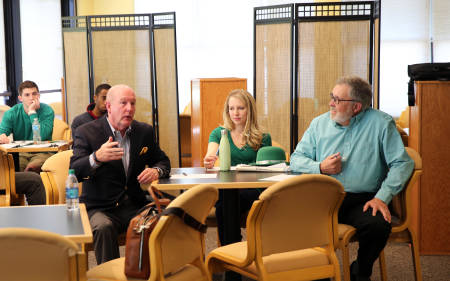 Groves tested Schwitzky’s public speaking skills by having him do an unanticipated guest lecture for a class. Schwitzky was under the impression that he would only be involved in an end-of-class Q & A session rather than doing a 75-minute lecture. But given the nature of his work as a business leader in the hotel industry, Schwitzky carried on with flying colors.

Schwitzky went from guest lecturing that one class 10 years ago to visiting campus every semester. He recently went to six classes over a two-day span providing lectures and feedback on student presentations.

“One of the things I enjoy very much is going back to campus and interacting with the students and professors,” Schwitzky said. “It’s an opportunity for me to give back, but also a way to continue learning. One of reasons I like to teach is that it is a way for me to learn and understand.”

Schwitzky started in hotels after leaving graduate school. He started his career as director of sales with Breckenridge Hotel Corporation, a company that used to own Campus Inn formerly located where Hampton Inn near campus now stands.

After spending 18 months with Breckenridge, Schwitzky relocated to Arizona to start a 20-year career with Westin Hotels and Resorts. After directing marketing departments at the Arizona Biltmore and The Westin La Paloma Resort & Spa, he was partner and CMO for nine years at Coastal Hotel Group. Schwitzky is now the vice president of eCommerce at TPG Hotels & Resorts, a role he took on nearly three years ago.

His favorite aspect of his job is the monthly webinar he creates for TPG’s 60-plus hotel leadership teams. Some topics he has addressed are social media, online reputation management, and tactics to drive traffic to hotel websites. Despite being a digital immigrant, friends tell Schwitzky that he has a “millennial mindset,” one that makes a solid effort to keep up with online trends.

“My objective is to delight [leadership teams] by providing solutions to their problems, including problems about which they may not yet be aware,” Schwitzky said. “It’s ambitious. The key is to first have a keen understanding of issues and opportunities, then prioritize the work flow.”

Along with working in hotel marketing, Schwitzky serves as an advisor on the board of directors for his son Zach’s technology startups, including Newlio, precis.in and Limbik. He also coached 17 seasons of youth baseball.

Take pride in everything

While a student at MU, Schwitzky was a delivery driver for Shakespeare’s Pizza, a young brand at the time. He competed with the other drivers to see who could deliver the most pizzas. Cruiser, a nickname given to him by coworkers, delivered over 5,000 pizzas for Shakespeare’s, holding a record for delivering 98 pizzas one night in less than eight hours—a pie every five minutes. 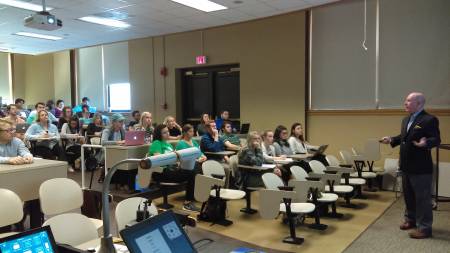 “This was in the infancy of Shakespeare’s,” Schwitzky said. “I would say that I played a part in building that brand early on and have great pride in being a part of that. It was a sustainable brand and is going quite strongly however many years later.”

Schwitzky was able to get his foot in the door in the hotel industry in part because of jobs he had while in college. He advises students to start building resumes now because part-time jobs can be stepping stones in the job application process.

“I look back and notice that I was learning all the time. My advice for kids in school today is that work is really another class for which you get paid. Life is a classroom, so take full advantage. Learn more about yourself. Learn more about the business. Learn more about customers, about branding, etc. Seize the opportunity and get paid for it in the process.”