Workers oversee a delivery of potatoes at the central… Expand ▸

First, there was what seemed like a simple request in 2005. That’s when Peggy Kirkpatrick, then the director of The Food Bank for Central & Northeast Missouri, asked Sandy Rikoon, Curators Distinguished Teaching Professor in rural sociology in the Division of Applied Social Sciences, and his team to do a survey of households in the 32 counties that comprise the food bank’s coverage area. 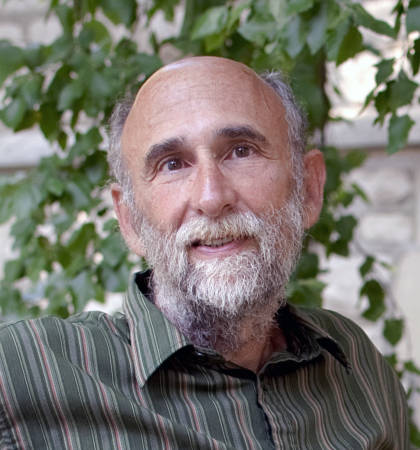 When the survey of approximately 1,300 homes was complete, Kirkpatrick asked Rikoon where they had disconnects with the people they served. Rikoon said he would compare the results of where The Food Bank’s affiliated pantries were located to data on hunger in Missouri counties. He quickly realized such data did not exist.

“We couldn’t answer her question because no one was collecting county-level information on hunger in Missouri,” Rikoon said. “That’s why we started the atlas because we couldn’t answer this simple question.”

Ahead of its time

The first edition of the Missouri Hunger Atlas came out three years later, in 2008, to provide a thorough analysis of statistics relating to hunger and food insecurity at both the statewide and county levels. The fourth version was released recently, following the work of Rikoon and three doctoral students — Annie Cafer, Darren Chapman and Kathlee Freeman — at the University of Missouri’s Interdisciplinary Center for Food Security. The report, which is done at no cost as a public service to the state, was believed to be the first of its kind when it first came out, Rikoon said. Since then, other states such as Kansas and Oregon have created similar models.

In each of the four reports, the overall outlook of Missouri in relation to hunger and food insecurity has grown increasingly grim. In 2008, 13 percent of the population fell under the category of being food insecure. In the most recent edition, that number has increased to 16.4 percent, with approximately 1 million Missourians facing food insecurity — or one out of six people in the state.

Bobbie Kincade, associate director of The Food Bank, has been with the bank since 2008. Back then, The Food Bank served approximately 88,000 people through its 130 affiliated pantries on a monthly basis. That number now sits around 100,000 — including about 10,000 alone at the organization’s central pantry 10,000-square-foot location on Big Bear Boulevard in Columbia. 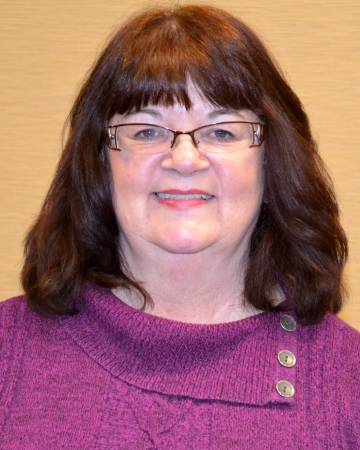 “We consider this information very, very valuable,” said Kincade, who added that the Atlas’ statistical information is heavily used when applying for grants and other related programs. The county-by-county breakdown also allows Kincade and her colleagues “to redirect resources and redirect our energies to go into areas and have a better strategy in place as to what we’re doing.”

Although Kincade was shocked to hear that Missouri ranks in the top 10 nationally in food insecurity (tied for fourth with Alabama with a 16.8 percent in 2014, according to research done by the U.S. Department of Agriculture), she was happy to see a few counties they serve that have historically had poor numbers improve their overall statistics — namely Callaway, Moniteau, Osage and Ralls counties.

Kincade added one key to lowering the food insecurity percentages was implementing more mobile pantry units that can provide easier access for the highly remote areas. Currently, The Food Bank uses about 12 such units.

With $1, The Food Bank is able to purchase 15 pounds of food or 12.5 meals through partnerships with manufacturers, wholesalers, restaurants and others in the food industry. With such a small amount providing such a big difference, an event like this year’s Float Your Boat For The Food Bank April 30 at Bass Pro Shops Lake in Columbia, brought in a record $62,618, essentially doubling the average total donation amounts in previous years. “If you just do the math, that’s huge,” Kincade said. 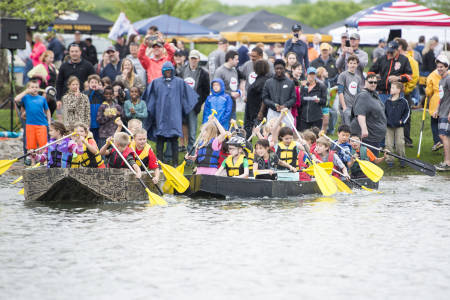 The Food Bank has a goal of being able to provide 28 pounds of food a month to those they serve. Kincade said her organization was designed to be a supplement, not a source for all food for those in need. “We’re not the grocery store that gives you everything you need for the month,” she said. “It would be wonderful if we could do that, but with our resources we are a bit limited so we try to do the best with putting an emphasis on not just pounds but quality.” For instance, through a concentrated effort in 2015, The Food Bank was able to increase its overall percentage of fresh fruit and vegetables from 19 to 24 percent, Kincade said.

Kincade added that if anyone is interested in donating to The Food Bank they can find the pantry nearest them by going to the organization’s website. She added that shelf-stable items such as canned goods and jars of unopened peanut butter “would be incredibly helpful.” Monetary donations can also be made at the site.

The calculations of determining whether someone is food insecure is a bit complicated, said Rikoon, who serves as the director of the center that published the Atlas. The USDA measures it based on the combined answers to 15 questions. The main determining factor boils down to whether some is anxious, worried or fearful of having a lack of access to a sufficient amount of healthy food that can provide a balanced diet.

In a report that was recently released by Feeding America, the country’s largest hunger relief organization that is the parent organization to The Food Bank for Central & Northeast Missouri, it was stated that the national food insecurity rates were at 14.7 percent in 2014. The USDA’s report for 2014 puts that number at 14.3 percent. 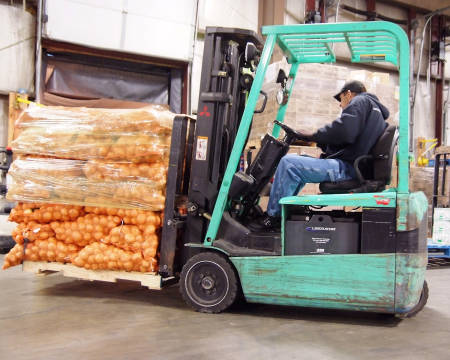 In a corresponding article to the report, Diana Aviv, the chief executive of Feeding America, is quoted as saying: “The public at large thinks that this problem has gone away.”

Kincade, though, said the citizens who live in The Food Bank’s 32-county area are, for the most part, “keenly aware of the food insecurity” in their communities.

“I think people are having a better understanding that no really knows the face of hunger,” she said. “The face of hunger can be anybody, it can be you. It can be me. It can be our neighbor. It can be a relative. I think a lot of the stereotypical ‘I know what they look like…’ That’s gone.”

In addition to the rising costs of monthly external expenses like housing and transportation, Kincade listed of a number of scenarios that could lead to food insecurity: single parents raising children, senior citizens on a limited income, returning veterans who cannot find employment. “Those people are suffering, they’re hurting,” Kincade said. “They need help. They are food insecure. And I think a lot of people understand that now. I don’t think it’s a mystery.”

Rikoon agreed. “In Missouri and in the U.S., there is no single face of hunger,” he said. “There’s no body type for hunger. There’s no age restrictions on hunger. No race or ethnicity restrictions for hunger. It doesn’t discriminate. We tend to associate food insecurity with rural areas and inner city areas, but it’s in the suburbs. It’s in small towns. It’s everywhere.” 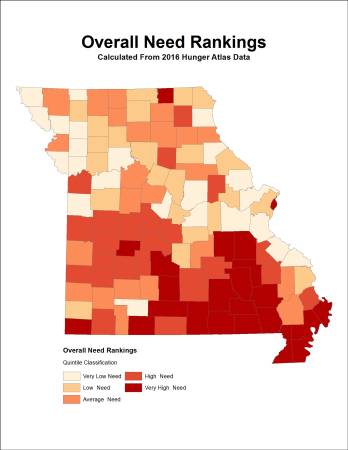 Rikoon pointed out on the 2014 USDA report that the most troubling number in relation to Missouri is the 7.9 percent who were classified as having “very low food security,” meaning to suffer from actual hunger instead of to only worry about hunger. Missouri ranked second on that list, behind only to Arkansas at 8.1 percent. “That means that the programs are not failing necessarily, but it means they are not able to meet the need,” Rikoon said.

Rikoon said one bright spot from the findings of the most recent Missouri Hunger Atlas is that about half of the counties that have shown persistent poverty and food insecurity also have a high levels of participation in governmental programs, such as Supplemental Nutrition Assistance Program (SNAP) and the Special Supplemental Nutrition Program for Women, Infants and Children (WIC). “There’s a fair amount of counties that have high need and high performance,” he said.

The parts of the state that Rikoon is most concerned about are the suburbs, such as St. Charles County, an area west of St. Louis with a total of population of more than 360,000. Although the rates of food insecurity and hunger are lower for St. Charles, the smaller percentages still denotes a lot of people in need. Furthermore, in suburban areas there tends to be less participation in government programs, perhaps due to a combination of pride and stigmas that come from seeking governmental help for the first time or a lack of government resources in an affluent county.

“The thing about hunger is that it’s not like with homeless people,  who you can often see in public areas,” Rikoon said. “Hunger is a private thing. It’s inside your house. It’s at your dinner table. There’s no way of driving down the street and seeing hunger.

“You can see houses in disrepair and you could make suppositions, but it could be people who live in decent looking houses. If it’s taking 40 to 50 percent of your income to pay for your rent and then you add utilities, you may be living in a decent house and not having much food in that house.”