Although abundant light was shining through the windows, it was the quiet before the storm. Andrew Ludwig, a University of Missouri sophomore majoring in plant sciences, surveyed the small tables and chairs spread out before him in the laboratory of the Benton STEM Elementary School on a recent Monday afternoon. He sifted through his notes. He was ready, even though it was his first time stepping foot in the building — and he was about to talk to a crowd of students spanning from the first to the fifth grade.

“I’m just going to try to stay enthused about everything because I’ve talked to some of my friends who are education majors and the big thing with conveying information to them is just being enthusiastic about it,” Ludwig said about his strategy on the “How Do Flowers Drink?” presentation he was about to give with fellow MU student Michael Gardner. 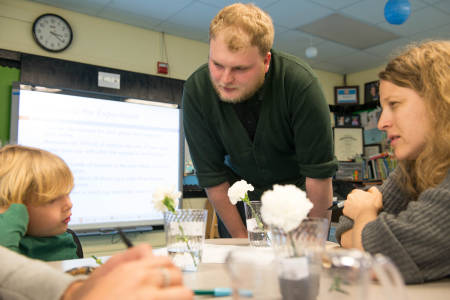 MU sophomore Andrew Ludwig talks with Leo Batchelder-Draper during an exercise exploring how plants absorb nutrients as his mother, Miriam Batchelder, looks on.

“I think the key is keeping them moving along, keeping them interested, because as soon as you lose their attention, they’re going to do whatever they want to do, so it’s going to be keeping things moving along at a pace that they’re still getting it, but that they’re not bored out of their minds,” added Gardner, who is a fifth-year graduate student specializing in plant stress biology. “We’re talking about water transport in a plant, which is a concept you can spend a semester on in a college-level course and still not be considered an expert on the topic.”

Both Ludwig and Gardner are a part of the team at the Bond Life Sciences Center lab of Melissa Mitchum, an associate professor in the Division of Plant Sciences. It was Mitchum who was able to launch the new “It’s All About Plants” series this spring with the Benton Elementary Science Club thanks to the science outreach portion of a new National Science Foundation grant that will further delve into a deeper understanding of the interactions between plants and  parasitic nematodes she received in August and a partnership with the MU College of Education’s ReSTEM Institute, MU Office of Undergraduate Research and Columbia Public Schools. 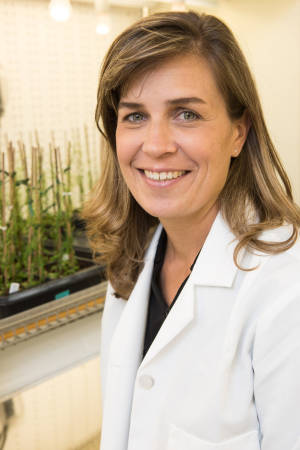 The end result is a program that fosters learning of all varieties: The elementary students learn about plants, while the college students learn how to take complex ideas and break them down to a more accessible level. Furthermore, the program pairs undergraduate students such as Ludwig with graduate students such as Gardner and principal investigator mentors from across campus — involving the existing NSF-funded initiative Freshman Research in Plant Sciences (FRIPS) and the Students for the Advancement of Plant Pathology (SAPP) in the process.

“I think it’s a challenge for all of us who have advanced degrees to really think about where we were long ago and bring the concepts down to a basic level,” Mitchum said, “but I think it’s very important for us to be able to communicate our science at that level to really get the kids excited about research.”

She added that the program “really reinforces the concept of engagement and active learning.” In particular, it reinforces hands-on learning through a variety of activities. “I think that makes a big difference in learning,” said Mitchum, who will have sat with the children for five of the 10 presentations that started on Feb. 22. “I think that’s one of the reasons why I’m such a strong advocate of undergraduate research and getting in a lab and learning how to work in a lab. The same thing applies here. When the kids are doing experiments in the science club, they’re going to retain that information a lot more.”

With those loud words reverberating through the room Ludwig had the attention of those before him — for a moment, anyway. The chatter had quieted down as he began to explain the main activity of the day, which would involve carnation flowers and six solutions of household items (sugar, salt, baking soda, vinegar, soda and food coloring) mixed with water in the same-sized cups – and one scenario with just water. 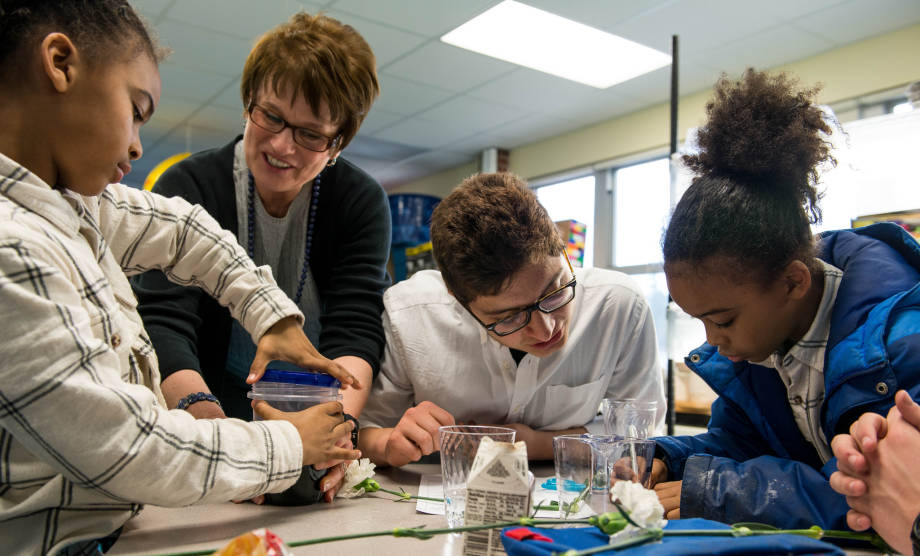 With the help of several volunteer MU students (whose hours are coordinated by Mitchum’s co-PI, Deanna Lankford, a research associate in the College of Education), the assignment was to pour 100 millimeters into each one of the cups.

The cups were then labeled with the name of the solution. This procedure was repeated three times. The white carnations were then cut to the height of the cup and placed in the water as a discussion ensued on what solutions would help the plant (besides plain water) and which ones would hurt.

Afterwards through the help of a video, the class was introduced to the idea of setting up controls and variables. The one variable, in this case, was the solution. All other factors (such as flower height, flower type, cup size and amount of liquid) were controlled, Ludwig explained. “We use the control to compare our other variables,” he said.

A moment later, Ludwig posed a question to the class: “Raise your hand if you think putting the flower in food coloring is going to change the color of the flower.” A collection of hands sprouted upward.

“We have some flowers that we put in the dye yesterday,” Ludwig continued, as he unveiled carnations that had white petals either tinged in red or blue to pass around to the class. 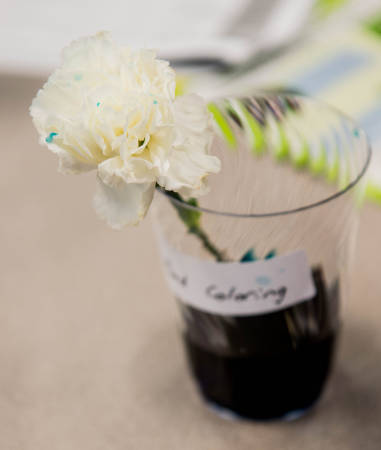 Following a brief video showing a similar experiment relating to celery and food coloring, Gardner explained the phenomenon to the class: “The plant is basically a big straw, so as the water evaporates up the plant, it pulls more water with it and then the food coloring too, so it gets to the very top of the plant, either the leaves of a tree or the top of a flower, and when it gets there the water will be able to evaporate, but the food dye can’t so that’s why your flowers are turning blue or red, OK?”

The food coloring portion of the afternoon turned out to be the top highlight for many of the participants. When asked about all of the projects he had worked on during the spring, Amahdrion Bradshaw, a second grader, proclaimed that “the funnest one was about dying the plants.”

Lankford and the ReSTEM Institute formed the Benton Elementary Science Club, which meets one afternoon every week during the school year, seven years ago — the same time Benton officially became a part of the STEM (Science, Technology, Engineering and Mathematics) program. 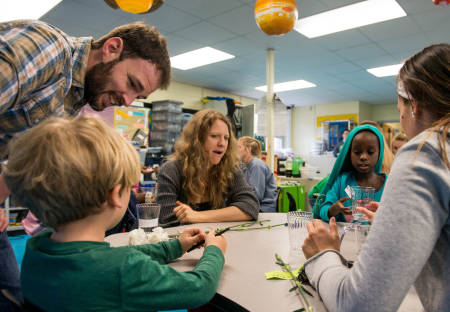 “The science club has allowed our students to continue to expand their understanding of a variety of science topics through hands-on experiences after school,” said Heather McCullar, a STEM specialist who works at Benton. “The kids always leave club excited to share what they have learned with their families.”

Over the years, Lankford has helped many principal investigators with the education portion of their grants. When Mitchum asked her about getting involved with an existing partnership, Lankford immediately thought about the science club with its previously established learning format.

“Melissa said ‘I need help with this.’ And I said ‘Great, let’s talk,’” Lankford said, “And we did and we came up with the idea and it has been wonderful. I really like the fact that we have mentors and mentees doing the presentations.”

Under Mitchum’s direction, a series of meetings were set up with mentors and mentees last fall to develop the curriculum and lesson plans that would form the backbone of the course. Given that the grant is funded for a total of three years, the plan is to continue to teach the “It’s All About Plants” program, which has been well-received by students and school administrators alike, at Benton next spring.

Furthermore, the end goal is to take all of the lessons that are being created and turn them into a booklet that is easily accessible for teachers in Columbia Public Schools, and beyond, by posting the material online.

In the meantime, the lessons are being molded by the interactions of CAFNR students and those at Benton. 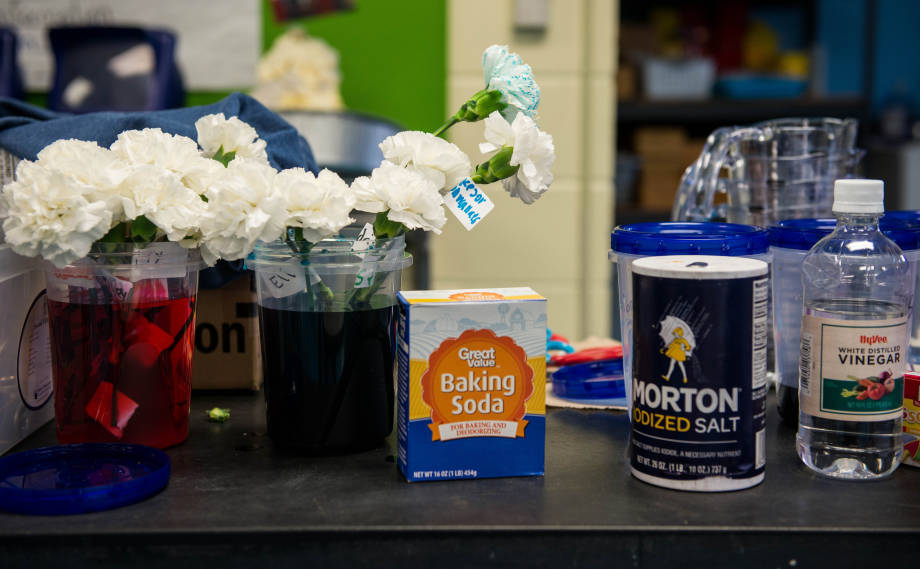 “You have some students who can’t write their names yet, and other people who know everything we’re trying to tell them before we start,” Gardner said, afterwards, referring to the beginning of the class when a student at the front of the room recited a brief and succinct view of a plant’s water transport system. “Apparently his grandma told him all of this stuff already. So yeah that was definitely a challenge that I think we did OK at it.”

“I think it’s really great for everyone involved from the elementary school students who are getting to learn about specific topics from people who are very well informed about it to undergraduate and graduate students who are getting a wider arrange of presentation skills,” Ludwig added. “You can get locked in your head about your research. It’s good to be reminded that the knowledge we gain through research also has a real-world application and that part of the scientific process is sharing.”

It’s a challenge that Mitchum said could serve as a benefit to anyone in the scientific community.

“It’s not easy for us to do many times,” Mitchum said of breaking complex idea down into something easy enough for a child to understand, or even an average adult. “It takes practice. So. It’s something we have to learn. Science communication is very important these days. Especially when we talk about what we’re doing in a lab, it’s very molecular, very cellular, but we have to find a way to make it relevant.”

She added that programs such as this one show children that not all scientists have “crazy hair with the goggles and lab coat. They see ‘Oh, these guys are just like everyday people.’ This is a realistic career for them.”

Would Amahdrion be interested in such a career path?

Still, when given the choice of attending the science club sessions or just going home after school, he has a quick reply: “Spending extra time at school because you learn more.”