Lauren Jackson came to the University of Missouri to study journalism in 1997. Jackson lived in Texas before making the trek to Mizzou and had her sights set on becoming a sports broadcaster.

She graduated with a degree in advertising in 2001 and developed a love for numbers during those four years. She had a student job in the department of agricultural and applied economics fiscal office that turned into a full-time job after graduation.

Things weren’t always easy while Jackson was at Mizzou, however. Jackson battled depression while at the University.

The Missouri Crisis Line is a 24-hour confidential line offered to individuals in Mid-Missouri.

“I used to think that going to get help was the weakest thing that you could do,” Jackson said. “It’s brave to get help. So many people are so ashamed of asking for help.”

Jackson did reach out to a therapist. Getting help also sparked a fire. Jackson started to think of ways to aid others who are also battling depression or something worse.

“Having gone through difficulties in the past makes me understand a little bit more,” Jackson said. “When you go through something that takes over your body, it’s tough. I wanted to give back with my experience.”

Jackson considered going back to school to get her master’s in educational, school and counseling psychology. She wanted to offer resources to people who couldn’t afford counseling. Jackson wanted to be a low-cost option and offer one-on-one conversation without a steep price.

The program at Mizzou is tough to get into and very competitive. Although Jackson didn’t get in, she started to look for other ways to get involved.

“In MU Info, about three times a year, they asked for volunteers for this crisis line,” Jackson said. “I just kind of jumped at the opportunity.”

Jackson started volunteering at the Missouri Crisis Line in 2006.

“Back then, we only did eight hours of training,” Jackson said. “We went on a Saturday. There was no shadowing. You just signed up and went. That’s why I was so nervous the first time I was called. I had never heard a call before.”

The Missouri Crisis Line has been active for 20 years. It is currently a 24-hour line. Jackson said individuals call for a variety of reasons.

“People that call range from people needing to know what homeless shelters there are, to having a bad day and needing to talk, to people that are in such distress that they are considering suicide,” she said. “We’re not there to judge. No two calls are exactly the same.

“You have to clear your mind. You have to be invested in the conversation. If you’re not, you can’t handle the situation.”

Jackson said she generally averages six to 10 hours each week. She’s on call once a week, meaning she has to pick shifts that aren’t filled by volunteers. Since the line is 24 hours, Jackson can receive calls or texts at any time throughout the day. She said there have been weeks where she’s volunteered for 60 hours in addition to her regular job. 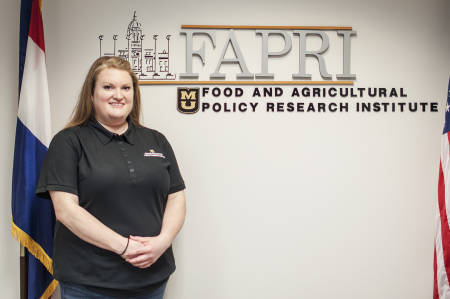 Lauren Jackson has been the business support specialist for the Food and Agricultural Policy Research Institute since 2012. Photo by Nate Compton.

Jackson became the business support specialist for the Food and Agricultural Policy Research Institute in 2012 after 10 years with the Economics and Management of Agrobiotechnology Center in the department of agricultural and applied economics.

The switch didn’t slow down her volunteering.

“We’re in a university town,” Jackson said. “If you work at a university or go to school at one in town, you’re surrounded by people who are generally in the same sphere as you. We live in this little bubble. This town incorporates so much more than that. We talk to people with different backgrounds, from different socio-economic levels.

“These type of lines are so valuable and important. We have some people who call every single day.”

Jackson has found other ways to give back, too. She is currently volunteering at Second Chance, an animal shelter in Columbia.

“My mom volunteered for everything,” Jackson said. “It’s part of me. I just started volunteering and fostering with Second Chance. I have a rescue cat at my house and I’m about to have another one that just had babies.

“Helping people and animals are two of my favorite things.”

Jackson said there are plenty of ways to get involved in Columbia. She encourages individuals to find something that they’re passionate about and jump in.

“I never thought I would be at the Missouri Crisis Line for this long,” Jackson said. “Most tire of it. People can get apathetic. You can get burnt out. I think you’ve got to be a certain type of person who is drawn to that. To new volunteers, you have no idea what’s going to happen so it is stressful. I remember being very stressed. Now, I know how to handle different situations. The biggest thing is not being nervous so you can actually listen. The main thing you do is listen.

“You can’t be everything to everyone, but it is your job to be there.”