s the famous Beatles tune goes, “I get by with a little help from my friends.” Roger Gardner brought the words to life, not only as a rock radio DJ in college, but by establishing a scholarship fund for students at his alma mater’s College of Agriculture, Food and Natural Resources.

Roger is the executive vice president and chief cultural and communications officer at Learfield. On April 12-13, 2016, he visited campus as CAFNR’s 49th Robert O. Reich Executive-in-Residence. During his visit, Roger lectured to students in CAFNR and the School of Journalism to provide insight gained throughout his career. 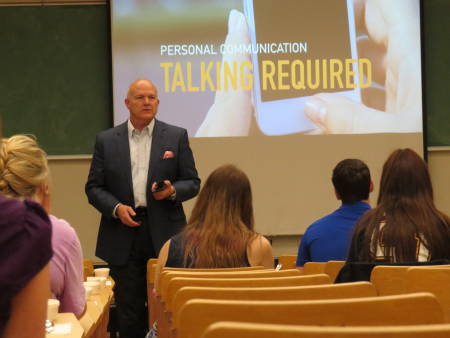 Gardner speaks to a class during his Executive-in-Residence visit. Photo courtesy of Morgan Beach

Roger studied agricultural education at MU, receiving his B.S. in 1983. He and his wife, Cheri, recently created an endowment fund for students within CAFNR. The scholarship honors their fathers who also attended Mizzou and received degrees in agriculture.

While a student at the University of Missouri, Roger juggled school, work and extracurricular activities. He was a member of Alpha Gamma Sigma, student council and the National Agri-Marketing Association.

As a high school student, Roger was heavily involved in the Future Farmers of America. At 15 years old, he started working for a local radio station in Harrisonville, Missouri, his hometown.

“That really sparked an interest that I had in media, radio more specifically,” Roger says. “It was a pretty significant decision, in that my life goal at that time was to be a farm broadcaster on the radio, to do markets. Long story short, that’s how I ended up at Brownfield, which is Learfield’s farm network.”

Roger started working part-time at Learfield as a junior at Mizzou. He would commute from Columbia to the company’s location just outside of Jefferson City and do farm reports on the air between 6 and 7 a.m. before heading back to campus for morning classes. He also worked at local Columbia rock station KFMZ.

“It was really weird because sometimes in the same day I’d be doing farm reports early in the morning and then in the afternoon rock music which was not exactly a cross-over audience,” Roger says.

For Roger, the strongest takeaway from his time at Mizzou was not the course work. It was the experience and relationships he gained as a Tiger.

“There’s something about CAFNR that is still different from a lot of other parts of campus,” Roger says. “There traditionally has been a personal touch with the College that is different. I don’t know if it’s like that for everybody. Part of you has to choose to engage in it. But if you do, and my experience was that you don’t have to try really hard, it tends to work in your favor in an astonishingly great way. Not only in the time that you spend here, but in the connections you can make that serve you later.”

“The work is really energizing in the sense that when you are around people who are not only intellectually but also artistically involved and are very passionate about what they do, that makes for a very high-energy work environment.”
― Roger Gardner

Roger also met his wife, Cheri, while at MU. Cheri received her degree in education from MU in 1984 and eventually would go on to teach children with learning disabilities for eight years.

Cheri’s roommate at the time was dating Roger’s roommate, and Cheri often gave her roommate rides in her car to the Alpha Gamma Sigma house. After crossing paths at a party, they eventually started a relationship that would evolve into marriage.

“My roommate sort of introduced us,” Cheri says. “After that, she’d always say, ‘Hey, why don’t you take me over there so you can see Roger.’ I hadn’t started dating him yet because it took him forever to ask me out.”

In his 34 years working for the Learfield Communications, Roger has been involved in various operations and management positions. His responsibilities and experience ranges from his initial role as farm broadcaster, to establishing the Iowa State Cyclone Network, to negotiating multi-million dollar contracts with major universities nationwide, contributing to Learfield’s ownership of multimedia rights to 120 major collegiate programs.

“A large driver in our business is advertising and sponsorship sales,” Roger says. “We’re dealing with major companies and talking to them about what they want to accomplish and how we can use the assets that we have to accomplish that. That’s an exciting, creative endeavor. I’m not directly involved in that, but I’m in the midst of it and have been for a long time.”

Along with working with people in athletic departments across the country, Roger enjoys working with high-energy, creative people in sales and production and the thought leaders that drive the news and farm areas of the network. He says the creative workplace is what drew him to radio in the first place. 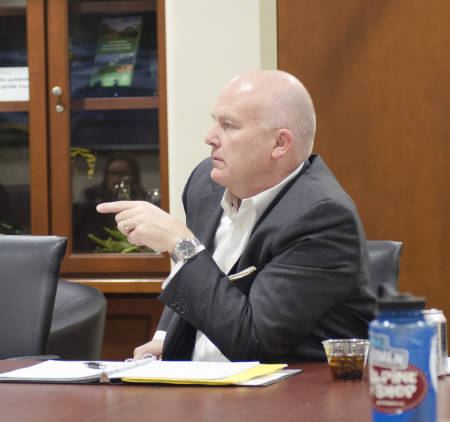 “The work is really energizing in the sense that when you are around people who are not only intellectually but  also artistically involved and are very passionate about what they do, that makes for a very high-energy work environment,” Roger says.

One commonly used phrase at Learfield is “do and redo.” The concept emphasizes that there is a lot of hard work and sometimes failure that leads up to the end goal of success. When looking at the course of a career, someone probably spent a lot of time working at some task, refining it, making mistakes and overcoming those obstacles to reach the point of accomplishment.

“It’s like with rock performers, you hear the term ‘overnight success,’” Roger says. “Well, really you just learned about them overnight. There was a lot of do and redo to get to that point. To skip over that, to not acknowledge it, it’s not fair and to some degree it’s an insult. It says, ‘Well, you just showed up to the party at the right time.’ They may have been preparing all of their life for that party.”

Roger also sits on the board of directors of Special Olympics Missouri, of which Learfield is a corporate sponsor. Cheri shares this involvement with the organization as an active volunteer. The couple recently helped with an initiative to establish an athletics center for participants in Jefferson City where they would have access to a community and equipment, as well as free health screenings.

“Special Olympics is a great example of a situation where you have the rally point, the athletics competition, but that’s not really the main thing,” Roger says. “There’s a huge value that comes from participation that far exceeds the athletic aspect of it.”

Roger and Cheri recently created an endowment fund in honor of their fathers, Stanley Gardner and John Unger. Both men studied agriculture at the university and are first-generation college graduates.

“Cheri and I both feel that we were given a lot of opportunities here that we hope other people have,” Roger says. “With any sort of level of experience or success that you have along the way, there’s always a temptation to think that it was achieved singularly. And that just isn’t the case. You can stand on third base and think you hit a triple, but you probably didn’t. There were probably some people that helped you along the way.”“[Roger] was an agriculture education major from Mizzou, exactly like me, which I found very inspiring. His story showed me how many opportunities I have waiting for me after graduating from the University of Missouri.”
―Robyn Eschenbrenner

“I wasn’t given an option in terms of picking a school,” Roger says. “And it wasn’t because my dad was a big sports fan or anything like that, it was all because this was the land-grant school. He spent his first two years at Southwest Missouri State (now Missouri State University) and then transferred to school here. He ended up in the agriculture school and taught after that.”

John, Cheri’s father, was born near Cabool, Missouri. He earned a B.S. in agriculture with an emphasis in animal husbandry in 1961. He spent the majority of his career working in sales and exchange management positions for the MFA, Inc., until retiring in 2004. During his career he lived in Columbia where Cheri was raised, but now he and his wife live on his family farm.

“My dad is a farm boy,” Cheri says. “He is the kindest, most humble man and loves working with farmers. He spent a lot time with MFA and loved that part of his life and the people. Agriculture was where he was comfortable and what he enjoyed. Now my parents live on my grandparent’s farm and have cattle. They are back to the farm life.”

One key player at CAFNR that helped both Stanley and John along the way was Allan Purdy, former director of scholarships and financial aid for MU. He helped Stanley with financial assistance and assisted John in finding a job.

“My dad actually still tells stories about going to see Allan,” Roger says. “He was representative of the kind of helpful spirit that has always been at the core of CAFNR.”

The endowment fund awarded its first recipients last year. The conditions of the fund are that CAFNR awards two scholarships every year: one to a student in agriculture education and one to a student in the animal sciences program. Preference is given to students from rural communities. 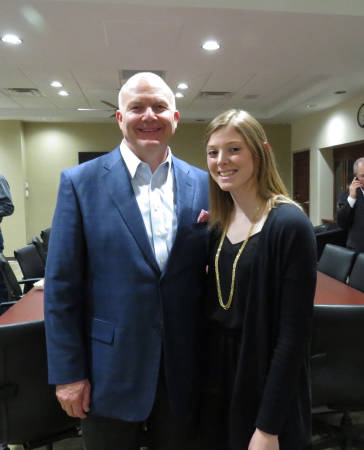 The first two recipients, Micala Gillen and Robyn Eschenbrenner, both received scholarships for the 2015-2016 school year.

Micala studies animal science and later hopes to earn a graduate degree in veterinary science. She is from Lockwood, Missouri, and hopes to open a mixed animal practice near her home after receiving her graduate degrees.

Before receiving the scholarship, Micala worried about retaining her job at the MU Veterinary Health Center because of the financial pressures to work more hours at a second job. The extra financial aid allowed her to maintain her level of involvement at the center while also permitting her to excel in her academics.

“Because of the Gardner-Unger scholarship, I have been able to do what I love with my job, my schooling, and my campus ministry that I am very involved in,” Micala says.

Robyn is a student from Jamestown, Missouri, majoring in agricultural education with a minor in plant science. During Roger’s Executive-in-Residence visit, Robyn had the chance to meet him and thank him and his wife for their support.

“I enjoyed listening to Mr. Gardner speak in my Business Communications class and learning about his successful journey with Learfield,” Robyn says. “He was an agricultural education major from Mizzou, exactly like me which I found very inspiring.  His story showed me how many opportunities I have waiting for me after graduating from the University of Missouri.”