Only one word sums up what Kyle Stiers felt when the first crystals started to grow: “Relief.” The now second-year biochemistry doctoral student had spent close to a year working behind the scenes to ensure that a new portion of a senior capstone class involving X-ray crystallography and protein structural analysis — using the state-of-the-art Advanced Light Source synchroton 4.2.2 beamline at Lawrence Berkeley National Laboratory — would go off without a hitch.

“This doesn’t happen without his efforts,” said Chris Lee, assistant teaching professor of biochemistry, who taught the course this past semester on the first floor of the Bond Life Sciences Center. 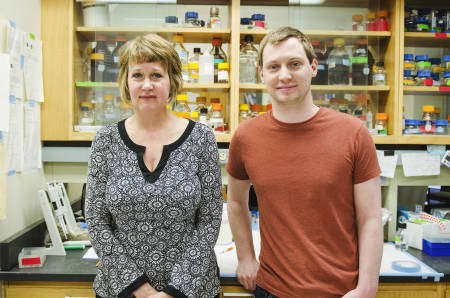 After taking the same course as a senior at the University of Missouri in spring of 2014, Stiers found himself a year later as a soon-to-be teaching assistant for the course trying to purify protein and test out a variety of conditions for the X-ray diffraction experiments. He was also trying to work out any possible snags that would come along with attempting to show a technology that had never been shown before in an undergraduate teaching laboratory setting. He also credits to the endeavor to two undergraduate students, Abigail Graham and Bailee Kain, who work with him in the laboratory of Lesa Beamer, associate professor of biochemistry.

“We did research in the lab, but it’s completely different when you’re trying to get 20 people to try it,” Beamer said.

“In a cost-effective, fast, way that works the first time with no barriers,” Stiers added.

Beamer has been working remotely with ALS beamline for about 10 years for her research on three-dimensional structures of proteins tied to human diseases. At first, she had Jay Nix, the director of the California-based beamline, work directly with her samples, before a specialized robot, the Rigaku ACTOR, was installed in 2007 to allow for remote data collection and analysis. She is one of several MU researchers who use the technology on a regular basis including John Tanner, a professor of biochemistry and joint professor of chemistry, who co-ran the series of X-ray crystallography lectures and lab sessions in Lee’s class. 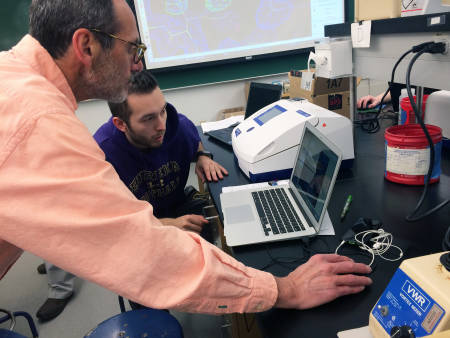 “The whole thing would not have worked if the students weren’t able to grow crystals,” Beamer said. “We had to take essentially what was a research project and implement it into a classroom and make sure that it would actually not fail… so there was a lot of foresight involved to make sure that would not occur.”

Added Stiers: “This is a research project, so you could spend months on getting crystals, but we used a system we were vaguely familiar with and then basically optimized it, so they would get the best teaching experience out of it.”

Working with crystals allowed the students to be exposed to a cutting-edge way to look at three-dimensional macromolecular structural information, which can play a critical role in understanding protein functions, enzyme mechanisms and drug design — or in Beamer’s case, discovering which proteins are relevant to human diseases.

Beamer first approached Lee about the project in December 2014. Given that Stiers was in place as the TA of his class and having Beamer and Tanner on board, “it was something that I was excited about pursuing,” Lee said – even if that meant a significant redesign of the course, which exposes seniors to an array of in-depth laboratory techniques, including recombinant protein expression and purification and confocal microscopy.

Lee said that the insertion of the crystallography curriculum “worked out beautifully” by bringing together three parts of the class that had previously been disconnected by taking the acid phosphatase enzyme protein, which had previously been used in the class, and tying it to teaching modules about kinetics, molecular structure and native purifications. That same enzyme protein provided the foundation for the crystals to grow from the protein’s molecule through the hanging drop diffusion method. 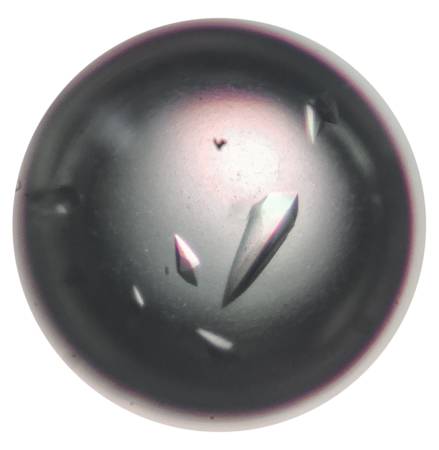 A microscopic view of crystals that have formed on top of histidine acid phosphatase enzyme protein. Photo courtesy of Kyle Stiers.

The series of four lectures and labs included a lecture by Beamer on crystallization — before the crystal samples were frozen and sent off to the lab in a specialized container — and a lecture by Tanner on data collection and analysis as the class began to look at the X-ray diffraction data results by interpreting electron density maps in real time using a web-based interface to control the robotic arm of the Rigaku ACTOR.

Lee said the crystallography sections were being mentioned as a highlight of the class, based on initial class evaluations.

“It far exceeded my expectations,” Lee said. “One of the beautiful things of working with professors on their research topics is that they are extraordinarily interested and so when they come in and present that material to the class the excitement that they’re bringing to it rubs off on the students.”

Iyas Daghlas, a graduating senior majoring in biochemistry from Columbia, said that working with the data generated from the beamline added an experiential component to my education. “It was also really amazing to see how interdisciplinary the process was, with elements of computer science, physics, engineering, and biochemistry,” he said.

Daghlas plans on being a physician at a university hospital to both see patients and perform research after graduating from Harvard Medical School, where he will start next fall. Although he does not plan on using the beamline technology directly in his chosen career, he acknowledged that one his main interests, neurological diseases, such as Alzheimer’s, often result from a protein structure “gone wrong” — which can one day loop back to the beamline and other technology that he experimented with in Lee’s class. 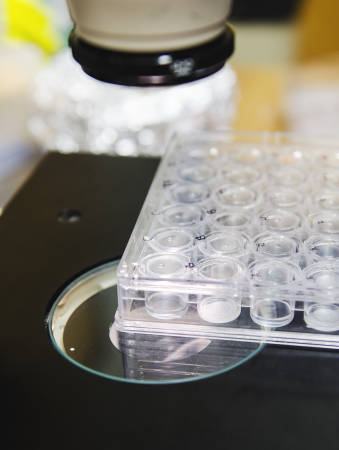 Completed in 1993, the Advanced Light Source at the Berkeley Lab is composed of 40 different beamlines that result in having electron bunches, traveling close to the speed of light in a circular path driven by magnets, emitting bright ultraviolet and X-ray light. The ALS actually ends up producing light that is one billion times brighter than the sun.

The 4.2.2 beamline, in particular, is overseen by the Molecular Biology Consortium. Used for structural biology, it specifically measures multiple-wavelength anomalous diffraction and macromolecular crystallography. The facility at Berkeley is only one of five in the U.S. that has the capacity perform such experiments.

The partnership between the Berkeley Lab and MU began in late 1999, when MU joined the consortium after supplying capital funding to the beamline, which started its operations in 2004. Nix noted that Tanner has served on numerous committees during the construction of the facility and that the executive board of the Molecular Biology Consortium includes representatives from MU. “MU is one of the lynch pins of success for the beamline,” Nix said.

Although there are 10 other universities that are part of the same consortium, the work with those institutions has mostly been either as demonstrations or classes that are geared toward graduate students or postdoctoral researchers, Nix said. MU, though is the first school to fully integrate the technique into an undergraduate course and will serve as a model for other members of the consortium, Nix added.

“I saw it as a link between students and an internationally top-quality research facility,” Beamer said of starting the undergraduate program. “You can’t put 50 students on an airplane to Berkeley and get them security passes to get into the synchrotron, but now they can collect data.”

Setting up for success 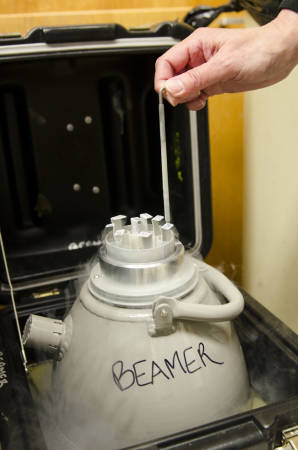 Beamer added that the exposure to the beamline can help prepare soon-to-be graduating seniors in the job market, by helping take students in one of two directions: studying general protein structures, which is used by pharmaceutical and chemical production companies or pursuing more technical applications, such as working on a similar beamline or working on computer-interfacing robots like the one used for the beamline.

“It allows students to perform real experiments at the state-of-the art facility using the same equipment, software and techniques as the most senior researchers in the field,” Nix added, “Working with the beamline also exposes students to the fact that there are many different talents necessary at a beamline.” Those areas of interests include software development, physics, biology, chemistry and engineering, he said.

Lee said that the partnership that started with the program in his senior lab would be able to expand into a sophomore lab class in the fall, when he teaches basic molecular techniques and simple cloning. In the future, Lee could envision that class helping Beamer produce some of the experimental materials she uses for her research with the beamline, he said.

“The real take-home message for me as an instructor is that we have this wealth of a resource here,” Lee said. “We have all of these different professors who are really engaged and doing really cool things with high-end instrumentation and really innovative, analytical techniques. Especially with the current funding situation, any way we can bring in some of the things that other researchers across this university do into the teaching lab environment and have it actually fit the curriculum, that will greatly enhance the technical expertise that these students are coming out of the class with.”