Fara and Richard Maltsbarger were both the first people in… Expand ▸

The University of Missouri College of Agriculture, Food and Natural Resources Executive-in-Residence program was created in 1996 to give students, faculty and staff an opportunity to learn from industry leaders.

“At that time, we still loved Mizzou but had never really been called upon to have an active role,” Richard said. “We wanted to give back financially. Scholarships had a big impact for both of us and allowed us to attend Mizzou.

“Mizzou has a special place for us. We wanted to enable someone else to come to Mizzou.”

Just a few years later, the Fara and Richard Maltsbarger Mizzou First Scholarship has been created.

“We are both the first in our families to go to Mizzou,” Richard said. “We’ve had such great opportunities and we wanted to give those opportunities to others.”

The Maltsbarger family gave $25,000 to establish a permanently endowed fund that will offer scholarships to CAFNR students who are the first in their family to attend MU.

“Why Richard and I wanted to give back to Mizzou with a scholarship is very simple – we believe it is our responsibility to give back to those who helped raise us,” Fara said. “Richard and I arrived at Mizzou in 1993 and 1994, respectively. We were kids with dreams and aspirations, but only scholarships and loans to finance them. During one of our lengthy conversations in the living room of my sorority back in 1996, I told Richard that my dream was to be in a position to spend my days volunteering, raising money for various organizations and giving back to those who had contributed to our overly blessed life. It was a vision that we were set on making a reality. Never stop thanking those who helped you get to where you are and where you want to be.

“We hope that the Maltsbarger Scholarship will allow other students to take their dreams and manifest them into reality.”

The University of Missouri was on Richard’s radar years before he was set to graduate high school.

“When I was growing up, I knew I was going to Mizzou,” Richard said.

Richard grew up in Green Ridge, Missouri, in Pettis County, which is about 80 miles southwest of Columbia. 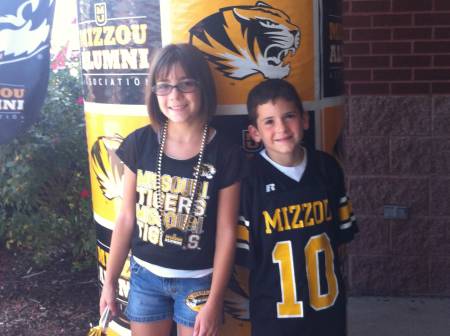 Fara and Richard have two children, Annabelle and Jackson, who are both huge Mizzou fans.

“I had an agriculture teacher that asked me about college,” Richard said. “I’m in sixth or seventh grade. I’m not really thinking about college. He told me that I needed to be thinking about it and that the University of Missouri would be the right place for me. He let me know that I was going to have to do some things to earn my way.”

Richard’s teacher helped him find the right activities, pick the right FFA project and show that he could balance these and work. Richard’s grandfather had a farm and he had family that raised cattle. That led to an FFA project involving cattle.

“I started raising Polled Hereford cattle,” Richard said. “I raised the cash through working for my grandpa and neighbors hauling hay for the summer and working at Pizza Hut. I was able to start a small operation. I had 10 to 12 head by the time I graduated. For a teenager, that wasn’t bad. Plus, they were all mine. I purchased them all through work.”

That dedication and hard work led to several scholarship opportunities – including a big opportunity from Mizzou.

“I qualified for the Curators Scholarship,” Richard said. “That really made all of the difference. It was a tuition-free, four-year scholarship as long as I kept my grades. Those don’t come along very often.”

“Deciding to go to Mizzou was actually the least thought out but best decision I ever made,” Fara said. “I knew that I wanted to study communications or journalism, but had not given thought to any colleges outside of the northeast. I did seek the help of my high school college advisor, but she didn’t see any reason why a student would look beyond the myriad of choices in New York. In March 1994, my mother happened to run into one of my middle school journalism teachers. He asked her where I had applied to college and informed her that there were much better journalism schools than the ones I had chosen.”

Fara’s teacher gave her a list of the top 10 journalism schools in the country. Fara’s mother asked the journalism teacher which was the best. He had no doubt – it was Mizzou.

“I don’t think she necessarily believed him, but I printed off an application and mailed it within the next day or two,” Fara said.

Fara was accepted to Mizzou less than two weeks later. She then had an important decision to make.

“I knew I needed to make a decision quickly,” Fara said. “I laid all of my acceptance letters across my parents’ bed. Anything in New York was off the table as I decided that it was important to attend school out of state.

“It was in that moment that I knew my decision. I looked at my mom and said, ‘I think I want to go to Missouri.’ And just like that, my decision was made. I decided to attend Mizzou not just for the stellar journalism program, but because I truly wanted experience going away for college.”

Richard knew he was going to do something in the agriculture world. He was looking at combining agriculture, business and computers.

“Graduate school was an awakening of horizons that I wouldn’t have even looked at otherwise,” Richard said. “I had no idea what I was going to do after I graduated. I just knew it would be something with agriculture or business.

“I found out that ag is not just farming. There are a lot of different ways to be in the agricultural industry.”

Internships followed for Richard, including one with Monsanto that turned into a full-time job.

“At the time, what’s now called big data was just called analytics,” Richard said. “It was just becoming something of interest. With my econometric background from FAPRI, my customer segmentation background from my internship from Monsanto, my computer programming background from Mizzou – it all merged into a role that they really hadn’t had at Monsanto before.”

Fara found similar success at Mizzou. She found a groove as a reporter for KOMU. 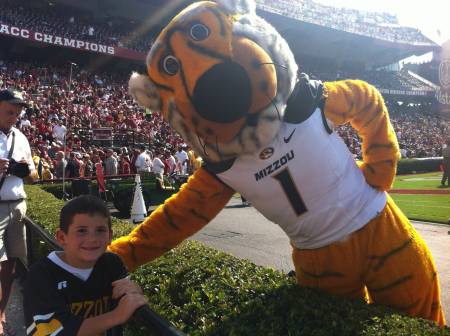 “By far, some of my favorite memories at Mizzou revolve around the opportunities I had to be a reporter at KOMU,” Fara said. “The days were very long, but there was nothing more satisfying than seeing your work hit the airwaves. I still have a VHS tape filled with every story of mine. Of course, I don’t own a VCR anymore, but I plan on converting the tape so I can show my children.”

“Some of my other favorite memories are the concerts I was able to see either at the Hearnes Center or Jesse Auditorium,” Fara said. “Prior to college, I had only attended two concerts. Once at Mizzou, I was able to see Adam Sandler, The Rolling Stones, Harry Connick Jr., George Clinton and many more. The discounted tickets we were able to buy with our student IDs allowed me to experience arts and entertainment at a level I had never been able to before.”

“We were a homecoming pairing,” Richard said. “My senior year, our two houses were paired for homecoming.

“We started dating during homecoming. Come this October, we’ll have been dating 20 years.”

“What I will always love the most about Mizzou is my membership in Alpha Epsilon Phi and how it led me to meeting Richard,” Fara added. “As a member of my sorority I was able to be socially active on campus, participate in various philanthropies, take on leadership roles and participate in both Homecoming and Greek Week activities. It was our partnership with Alpha Gamma Rho at the beginning of my junior year that lead me to Richard.”

Richard and Fara married in September 2000. The couple were living in St. Louis at the time.

“The day after our honeymoon, a coworker wanted me to go to lunch with him and his wife,” Richard said. “We go to lunch and he leaves and tells me that I’ll be having lunch with his wife. I’m just thinking that this is a little weird.

“It turns out that her market research company was being acquired by IBM. They needed to hire people with my skillset. I made the leap out of ag into technology.”

Richard served as a business consultant for IBM for more than three years.

The consultant job was great, Richard said, but significant traveling was required. When Richard and Fara started a family, Richard was looking for a change. Annabelle was born in 2003 and Jackson was born in 2005.

“When we started a family, the travel really wasn’t working,” Richard said. “We had to make a life adjustment. Lowe’s happened to be one of my clients. They had a director of customer analytics job come open, and I was ready to get off the road.”

Together, they packed up and moved to Charlotte, North Carolina. Over the years, Richard’s role at Lowe’s has grown. He is currently the chief development officer of Lowe’s and president of Lowe’s international businesses.

Fara has also achieved her dreams of being able to give back through volunteering and in private business. She has been a leader with the Lake Norman Elementary Parent Teacher Organization since 2008 and served as the president since 2012. Fara has been an independent distributor for Premier Design Jewelry since 2009 as well. She has served as a girl scout leader/cookie mom since 2010 and helped fundraise as part of the Temple Kol Tikvah PTO, too.

The Fara and Richard Maltsbarger Mizzou First Scholarship will have a few requirements for distribution. Those include being the first person in your family to attend Mizzou, a high school grade point average of 3.5 or higher on a 4.0 scale and those who give back to their community.“Mizzou has a special place for us. We wanted to enable someone else to come to Mizzou.”
―Richard Maltsbarger

“We want it to go to someone who’s focused on something larger than themselves,” Richard said.

Chenoa Schwenn, senior in animal sciences, is the first recipient of the scholarship. She said she is forever indebted for the opportunity she has received.

“Being awarded the Maltsbarger Scholarship was a true gift,” she said. “Without generous donors who provide scholarships such as these I would never have been able to think about pursuing an education like the one I am receiving at the University of Missouri. Not only am I graduating with a bachelor’s in animal sciences, but I am going on to vet school at Mizzou as well. The Maltsbarger Scholarship helped to make this all possible and I am truly thankful for it.”

On the first Mizzou Giving Day, help students like Schwenn by supporting the CAFNR Scholarship Fund.

Richard is a member of the CAFNR Vice Chancellor’s Leadership Council and CAFNR’s Our Time to Lead Campaign. Fara and Richard are members of Monticello Society and the Jefferson Club.

“We’ve had such great opportunities – and we want to help others,” Richard said. “We wanted to put an emphasis on helping others begin their journeys. For us, we’re still pretty early in the earning lifetime. There’s something to the experience of college opening up your mind to what’s possible.

“We love Mizzou and we’re happy to be able to give back.”