In their third and final spring contest, the Tigers took a narrow victory over the University of Florida and The Ohio State University who placed 2nd and 3rd High Teams, respectively.

Meat Judging Team coach and Ph.D. student Katy Shircliff said this year’s team is “hardworking and dedicated” and has the best attitude a coach could ask for.

“I am very blessed to have a group of individuals who can learn from mistakes, take constructive criticism and maintain a positive mindset,” Shircliff said. “In general, the team had a very successful spring season and the cards finally fell our way at the Southeastern.”

The Southeastern is a long-standing contest with a rich history and tradition of being held by The Ohio State University and The University of Kentucky.  A portion of the contest is done in each location; all beef grading and beef classes are judged at the Pickaway Correctional Institution right outside Orient, Ohio, while the UK Meat Lab procures the pork, lamb and specification classes.  The contest is unique in many ways including the opportunity to visit two university meat labs, see the inside of a state penitentiary, compete over a two-day span and bet on the ponies racing at Keenland in Lexington, Ky.

“It was a very interesting contest compared to our normal contests, not only because we had the opportunity to judge some challenging classes in a prison but also because it was split over two days,” sophomore Bailey Kemp said. “It was a great experience that also allowed us to visit other universities and gain more industry experience.”

The Meat Judging Team already had a fairly successful spring season placing 5th High Overall at the National Western in Denver, Colo., and 2nd High Team Overall at the Iowa State Invitational in Ames, Iowa. Bringing home a victory at the Southeastern was the icing on the cake for the team who was happy enough simply having the opportunity to travel to the contest. 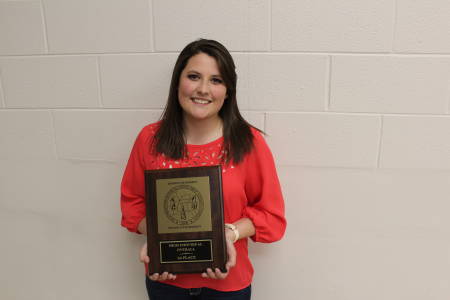 Katelyn Adams sailed in under the radar to clinch High Individual Overall. Adams, who had just missed hearing her name called during the banquet for several individual awards, posted a consistent day placing 4th in beef grading, beef judging and specifications.  Narrowly missing a tiebreaker, Adams also placed 2nd in reasons, which assisted the team in clinching High Team Overall in reasons.

Helping widen the gap was Caleb Grohman and Bryce McDonald who both aced the specifications rail scoring a perfect 100 and tied for 1st in the spec division.  Grohman edged his teammate out for first based on a higher overall score.

“Personally, this contest was exciting for me as it was my first time being in the top five individuals in a meats contest,” Kemp said.

In addition to winning the reasons division, as a team, the Tigers were also 1st in specifications and beef judging, 2nd in total placings, and 3rd in lamb judging.  The contest results were neck and neck and with a photo-finish victory, the Tigers edged out the competition to win High Team Overall.

“I love the competitive atmosphere and really enjoy build up before contests, the suspense of waiting to hear how we did and, of course, hoping we get our names called during the results,” Shircliff said.

The team attributes their victory in part to the team’s sponsors and supporters. Without donations, the team would not be able to travel to competitions nationwide or gain the hands-on training experience needed to succeed. To become a sponsor, donate online or contact the CAFNR Office of Advancement at givingtocafnr@missouri.edu .

“The team would like to thank The Missouri Association of Meat Processors for their support and contributions to the team, as well as the contest hosts, official committee members, Rachel Adams and the American Meat Science Association, and last but not least, all the family and friends supporting and following the team this year,” the Mizzou Meat Judging Team said in a press release.

This was the Meat Judging Team’s last competition before summer break. The team’s season will resume at the beginning of the fall 2016 semester.

“We will only have three weeks to get back in the swing of things before our first contest,” Shircliff said of the fall semester. “I am hoping the team comes back with a positive attitude and can appropriately walk the line of confidence.  The Southeastern, like every other contest, was a great learning experience. We will need to regain our mental stamina and be prepared for a busy, competitive fall season. We will attend a total of five contests before Thanksgiving break.”