Numerous people were on hand to surprise Maria… Expand ▸

Maria Kalaitzandonakes had a short meeting scheduled Tuesday morning with Bryan Garton, the associate dean and director of academic programs at the University of Missouri College of Agriculture, Food and Natural Resources. 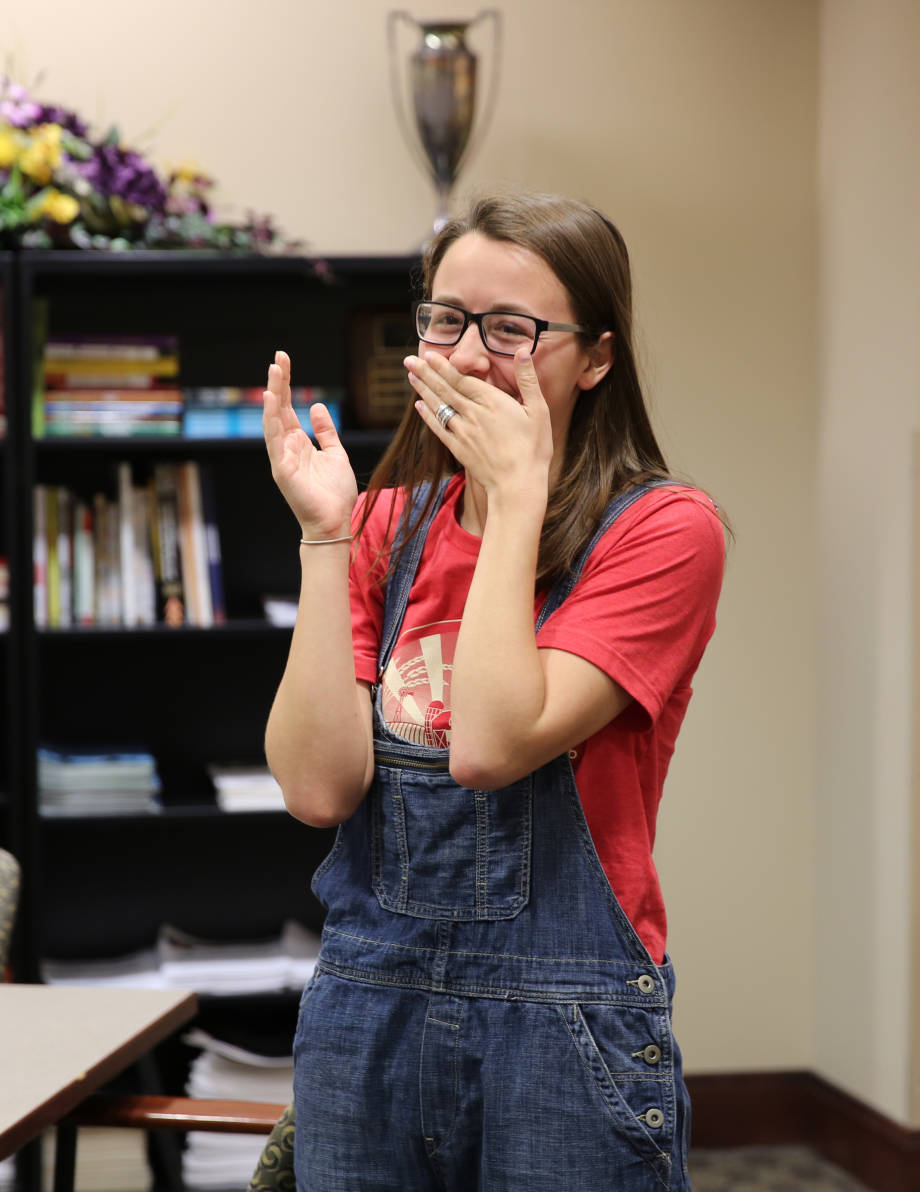 Maria Kalaitzandonakes was extremely surprised to hear that she had received the 2016 Truman Scholarship.

She wasn’t sure what the meeting was going to hold – but there was a huge surprise at the end of it.

Kalaitzandonakes, a junior at Mizzou, double majoring in agricultural economics and science and agricultural journalism, was a finalist for the 2016 Truman Scholarship. She found out Tuesday that she had received one of the scholarships.

“I was so surprised,” Kalaitzandonakes said. “I’ve been so busy. I have a lot of tests coming up, so I went to Starbucks at 6 this morning to study. I came over here, and I felt like something was up. I had no clue what was going on. Why did Dr. Garton want to talk to me? I thought I was going to get in trouble. He was talking about my degree program. I had no clue why we were talking about that. All I could think was, ‘Why am I here?’

“When I came out here, and saw everyone, I couldn’t believe it. It was so great to see all of these people who have supported me throughout my studies here. I felt surrounded by love. I’m so blessed. I can’t believe that this is a reality.”

The Truman Scholarship is awarded to successful and motivated collegiate juniors who are not only leaders, but also individuals who are devoted to improving the world by helping others. The scholarship, in an amount up to $30,000, can be applied toward graduate studies in numerous fields.

The Truman Scholarship was created in 1975 by Congress as a memorial to Harry S. Truman. It is awarded to around 60 collegiate juniors each year. It is open to U.S. citizens and U.S. nationals from the Pacific Islands. In 2016, there were 775 files reviewed from 305 institutions. Kalaitzandonakes was one of 197 finalists and one of five from Missouri.

The scholarship includes several interviews and essays, the first of which took place at the University of Missouri.

“The most nerve-wracking part was the Mizzou interview, actually,” Kalaitzandonakes said. “It was the first time I had ever done something like that. I interview people all of the time, but I don’t particularly like being on the other side of the microphone.

“I arrived two hours early. I sat outside with my book on tape and was trying to calm myself down.”

Kalaitzandonakes was given Mizzou’s stamp of approval. Another interview quickly followed.

“At that point, I was a lot less nervous,” Kalaitzandonakes said. “I felt proud that I was representing Mizzou and agriculture.

As a finalist, Kalaitzandonakes entered the final interview process, which took place in Kansas City. Finalists from Missouri, Iowa and Kansas were all interviewed at that location. During that time, Kalaitzandonakes had an opportunity to network with the other finalists.

“I went to dinner with all of the other finalists the night before the interviews,” Kalaitzandonakes said. “Everyone was outstanding. To be a finalist, you have to care about the world. You want to change things. You’re someone who is already impacting your campus. I was surrounded by people exactly like me. They were amazing. I had the best day.

“The next morning, we all sat in a room and ate doughnuts and drank juice. We just talked. I really wanted to be best friends with everyone in there. They were all amazing.”

Before her final interview to possibly become a Truman Scholar, Kalaitzandonakes took advice from her father, Nicholas Kalaitzandonakes, a Missouri Soybean Merchandizing Council Endowed Professor of Agribusiness Strategy at Mizzou. 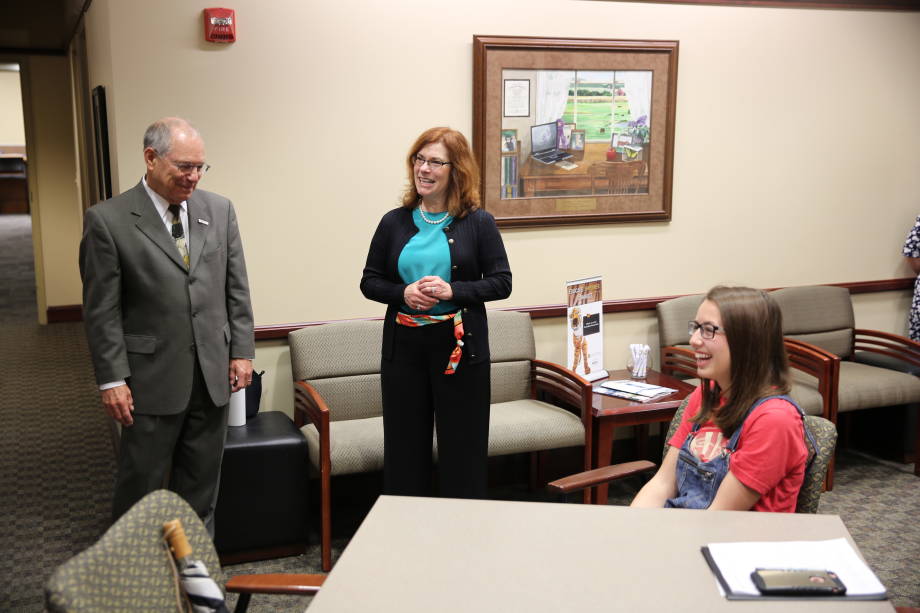 Plenty of stories were shared while numerous individuals gathered to surprise Maria Kalaitzandonakes.

“For a while, I was thinking about how I could make myself more like the other candidates,” Maria Kalaitzandonakes said. “In the end, I focused on being myself – which is what my dad told me I should do. When they asked me questions about agriculture that I disagreed with, I fought them on it. I walked in there with a certain confidence.

“Throughout all of my essays and interviews, I was 100 percent myself. I am a weirdo, and I embrace that. In CAFNR they call me a city girl, and in journalism they call me an ag girl. I’m somewhere in the middle.”

“Authenticity is central to a student’s being selected for any prestigious fellowship, especially if personal interviews are part of the process, which they are for Truman, both to receive a campus nomination (we are usually limited to no more than four nominees) and at the finalist stage,” Parshall said. “The interview panelists are rigorous in their approach and can detect shallow or insincere candidates.”

Parshall played a very important role in Kalaitzandonakes’ decision to apply for the Truman Scholarship.

“There was an email that mentioned applying for fellowships,” Kalaitzandonakes said. “I went to a meeting during my sophomore year – and I heard all of these amazing people talking about what they wanted to do in life, and how dedicated and devoted they were. Those were the type of people that I wanted to be around.

“I went to Mr. Parshall and told him that I wanted to meet with him. When I met with him, he had one comment, ‘Tell me about yourself.’ That was the first of many times that he said that. I told him about my devotion to food security and my devotion to agriculture. As I was talking to him, he had a few things that he wanted me to apply for. First, though, he said I should apply for Truman Scholarship.”

Kalaitzandonakes said the process was stressful and tedious, but she started to enjoy the work after a while.

“Once Maria learned about the Truman Scholarship, she took off with the application – I didn’t need to motivate her at all to continue to revise and refine her work,” Parshall said. “She took criticism extraordinarily well, whether from our campus interview panel or from me, and quickly adapted her application to reflect her thoughtful consideration of questions we raised.”

Kalaitzandonakes is part of a Facebook group with the other finalists from the Kansas City interviews. Several of those members had been receiving emails that they had not been selected as a Truman Scholar. 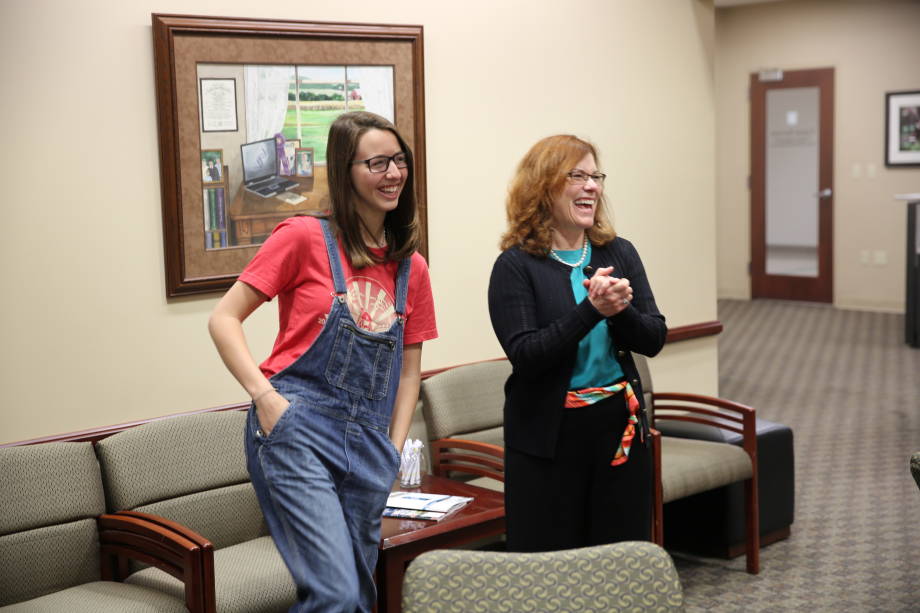 “This waiting process has been the worst,” she said. “I was just panicking because I hadn’t received an email. (Monday), I refreshed my email probably 200 times. No one emailed me. I called my mom and she thought that not receiving an email was probably a good sign. I didn’t think so. I emailed Tim because I’m impatient. I just asked if he knew what was going on. He didn’t email me back – so I figured he knew and he wasn’t going to tell me.”

Kalaitzandonakes was relieved to hear the news – especially in such a fun manner.

“I’m insanely surprised and insanely excited,” she said. “I can’t believe it.”

Sharon Wood-Turley, who serves as one of Kalaitzandonakes’ advisers, thought the honor was well earned.

“I was thrilled to see Maria’s strength as a student and a leader recognized in this way,” Wood-Turley said. “I cannot imagine anyone more deserving. Maria is bright, determined and fearless. I have always admired her passion and her need to speak up for the voiceless, the powerless and those in need. Many people talk about wanting to make the world a better place but never take actions to do so. Even as a high school student Maria had an enormous impact through her work as a refugee crisis officer. She continues to put her energy toward being the change she wants to see, and encouraging others to do the same.”