When she first thought about her career, Brice Hanberry imagined herself working in one of the fields of biological sciences. Perhaps she would follow the footsteps of her mother and teach at a private boarding school.

“It’s taken me a while to get this point, so I’d like to say that my life is more accidental than purposeful,” Hanberry says with a laugh. Like the forests that she researches, her career has grown organically over the years. As someone who was born in Virginia, raised in New Hampshire and earned degrees at universities in California, Illinois and Mississippi, Hanberry’s lack of a discernible regional accent speaks to her All-American journey to Columbia. 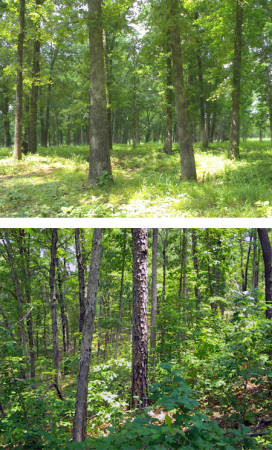 Before Hanberry arrived at the University of Missouri in 2008 to work as a research associate in the School of Natural Resources in partnership with the USDA Forest Service, her academic focus while working on her doctoral degree at Mississippi State University was on wildlife — successional birds and small mammals, to be exact. That all changed, though, when she had the opportunity to work on some extremely rare tree state surveys that date back to the 1800s.

This question is at the center of a recent academic paper “Loss of aboveground forest biomass and landscape biomass variability in Missouri, US” published in the March issue of the Ecological Complexity journal. Hanberry and fellow collaborators Hong He, professor of forestry, and Stephen Shifley, U.S. Forest Service scientist, compared the historical disturbance of Missouri forests from 1813 to 1850 caused by wildfires and other natural occurrences to the current disturbances (2004 to 2008) on aboveground tree biomass and landscape variation caused by wood-cutting and clearing and other related practices.

The study showed that current forests are more dense, but had a little less biomass than they did in the 1800s, when trees had greater diameters — and therefore could sequester, or store, more carbon — but often lower densities. The research points to a need to preserve large-diameter trees through rotation or retention processes during cutting or other land use practices, Hanberry says, to provide forest cover to the surrounding area while providing biodiversity and carbon sequestration events. Furthermore, greater biomass occurred along major rivers and tributaries, such as the Mississippi and Missouri rivers.

“If you’ve already put 30 years into this tree, in a sense, by keeping it, let’s keep it longer. Try to keep that capital or time input into that tree,” says Hanberry, who has been serving on the editorial board of the Society of American Foresters’ Journal of Forestry for two years. “A lot the times we think about human capital or economic capital, we don’t think about what kind of things we’re getting by keeping some of that natural capital in the ground.”

This philosophy can be most directly applied to new home development, Hanberry says. “Oftentimes they just come in and take everything out,” she says. “Everything’s gone and then they might go back and plant some pear trees or something like that. If we can just think a little bit, how hard would it be to keep some of those trees and it would be good for carbon sequestration and maybe attractive still for birds for nesting purposes.”

“A lot the times we think about human capital or economic capital, we don’t think about what kind of things we’re getting by keeping some of that natural capital in the ground.”
― Brice Hanberry

Around the same time that Hanberry arrived at MU, Jim Harlan, an assistant program director in the department of geography in the College of Arts and Science, was working on having the microfiche that contained the original survey notes conducted by the Bureau of Land Management in the 1880s transcribed into a database that corresponded with a geographic information system (GIS) layer.

To heed the order of the bureau’s General Land Office, a majority of the U.S. was surveyed in square-mile sections measured out with chains. At each corner of the plotted section, they recorded the information of the nearest tree (species, diameter, distance from point, direction the stand was standing). They also recorded information at every half mile along the section. Thanks to the work of Harlan and his associates, Missouri is one of only three states that have a complete survey available from this time period, listed on the Missouri Spacial Data Information Service site under the “Cultural/Historical” category.

In addition, it was found that historical forests are a closer match to forests that have been treated with prescribed burns and feature an open midstory between the forest floor and the overstory canopy, as compared to an unmanaged contemporary forest with abundant vegetation growing in the midstory.

A majority of Hanberry’s research at MU has revolved around the idea of promoting open forests that were more prevalent in earlier times, as opposed to forests of today, which generally feature closed canopies. The open forests that thrived tended to be dominated by oak and pine trees, which are fire-resistant and have proven to be able to withstand the tests of time better than most species.

“And if we’re worried about climate change,” says Hanberry, who is also an affiliated investigator with the Northeast Climate Science Center, “that’s a good thing to consider because they have been dominant for thousands of years so we know that they’ve been able to deal with a lot of historical variation and probably future variation.”