Laura Moley, then a senior in animal sciences, explains to… Expand ▸

It may have been 54 years ago, but Dudley and Virgie Alexander still remember what it was like to be a newlywed couple with an infant son when Dudley was finishing up his master’s degree at the University of Missouri. They were able to get by through a scholarship given by the College of Agriculture (as it was known then).

With a bachelor’s degree from MU in 1959 and his master’s degree in 1962, both in agricultural economics, Dudley went on to a highly fruitful banking career that began with dealing with trusts related to the management of a large portfolio of farms and ranches. In 1997, he retired as a senior vice president at Boatmen’s Bank in Kansas City, although according to Virgie, even though “he quit the bank” he has never assumed the role of a traditional retiree — especially in regards to the work that needs to be overseen on their farms located in Fremont County in the southwestern corner of Iowa.

“My wife and I are interested in trying to help the development of the students. Everything we’ve done has been in that area.”
―Dudley Alexander

“He works with his mind most of the time,” Virgie says of the man she married 55 years ago. “He’s always planning something for the farms, some new operation or new project for the farms. That’s mostly his work and his entertainment. He doesn’t consider himself retired.”

Dudley grew up in Platte City, Missouri, a half hour north of Kansas City. Although his parents moved off the family farm when he was 3 years old, he still worked on farms all the way to when he first arrived on the MU campus.

He met Virgie at an annual meeting of the local chapter of the Rural Electric Association that his father managed. The meeting was held at what is now known as the Lake Maurer Retreat Center in Excelsior Springs, Missouri, which was owned and operated by Virgie’s parents. They married in 1960, a year after Dudley finished his bachelor’s degree at MU.

The couple lives in Lawrence, Kansas, to spend time with their two adult children (one of whom works as a professor at the University of Kansas) and three grandchildren. Dudley, though, is not afraid to wear his black and gold colors around town. “I wear my Mizzou stuff,” he says with a laugh.

Giving back to younger Tigers

Shortly upon retiring, Dudley came to the realization that he ought to pay back his alma mater’s generosity by paying it forward through the establishment of a scholarship program rooted in undergraduate research. This thought lead to the founding of the Alexander Scholars program. Since its founding in 2004, the program has provided scholarship assistance to 54 students from the College of Agriculture, Food and Natural Resources.

“My wife and I are interested in trying to help the development of the students,” says Dudley, who was named the recipient of the 2010 Ag Alumni Association’s True Tiger Award for his collective service to CAFNR. “Everything we’ve done has been in that area.” He was also the recipient of the 2003 Citation of Merit Award and the 2010 Mumford Distinguished Service Award.

The couple makes a point of visiting with the students who have been named Alexander Scholars every year. They plan to stop by the MU campus to visit this year’s students later in the spring.

“The students who we help are really deserving,” says Virgie, who is a retired school teacher and counselor. “They’re hard working kids. Most of them are farmers and most of them have had their own businesses since they were kids. It’s fun to watch them get some resources. They’re always really grateful that they can continue their education because of the fact that we can help out a little bit.”

In addition to the scholarship program, Dudley served on CAFNR’s Steering Campaign Committee from 1999 to 2005 to help the College reach its goal of $60 million in donations. He also sat on the board of the CAFNR Foundation for seven years. In 2007, he helped orchestrate the purchase of the Gathering Place Bed and Breakfast, located across the street from the MU campus on College Avenue, to help provide priceless training for students going into the field of hospitality management. In 2011, he served as the foundation’s president.

His other contributions while with the foundation include playing an instrumental role in purchasing 30 acres of land adjacent to the Horticulutre and Agroforestry Research Center in New Franklin and leading the efforts to provide funding for a composting facility at the Bradford Research Center and for maple sugar processing equipment at the Baskett Wildlife Research and Education Center in Ashland.

“His lasting legacy is that he changed the way the foundation looks at opportunities to benefit the college. The foundation retains Dudley’s entrepreneurial spirit,” says Marc Linit, senior associate dean for research and extension.

In 2007, he started serving as a guest lecturer in a senior capstone class taught by Mike Monson, associate professor of agricultural and applied economics in the Division of Applied Social Sciences, called “Planning the Farm Business,” where he would talk about the keys to being able to successfully evaluate, acquire, refurbish and sell farms and ranches. “He shares his perception of farmland as an outside investor’s standpoint, which is a very business-like aspect to the purchase of or the ownership of farm ground,” Monson says.

Monson says that Alexander, who is scheduled to visit the class on March 23, has a favorite phrase that he usually asks the class: “What do you think about that?” “He’s as interested in learning from them as they would be learning from him,” Monson adds. “He likes to know what their mindset is and things they’re thinking about and he’ll be upfront about them with that and say he’s there to pick their brain as much they are to pick his.” 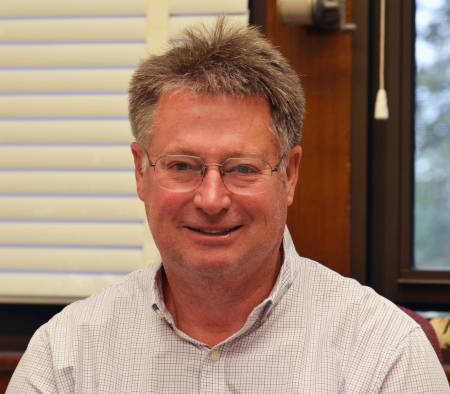 Several of those students would then spend a weekend during the spring semester on his farms to help get an even better idea of the work that goes into prosperous farm management practices by splitting the time into two parts: investing in farmland (the criteria to look for and how to manage it) and investing in commercial real estate (what properties to buy, how to manage based on the surrounding area).

Scott Coleman, who graduated from CAFNR in 2008 with a degree in general agriculture, was one of the first students to attend the weekend excursion. He says he still uses the knowledge he gained from that experience when making decisions on what land to buy as a farmer based near his hometown of Callao, Missouri, where he raises corn, soybeans, wheat and cattle among other pursuits. He says he currently owns about 200 acres, but his total operations span close to 2,000 acres. The majority of the land he tends to is rented from approximately 30 landlords at a given time, so being able to see the perspective of investors and owners has been invaluable to him during his career. He encourages every student in Monson’s class to consider going on the weekend trip.

“If you are considering renting farmland, which most farmers are, then you need to learn how to look at it from the investor’s perspective,” Coleman says. “I’ll have two or three farms change per year and that may be that their kids inherited it or they sell it or maybe they transfer one farm to the other. I then have to be able to not only sell myself; I have to be able to explain the value in these farms. If someone else wants to buy this farm, I have to be able to tell them through the investor’s perspective what return to expect, so I wouldn’t trade the experience of the internship for the world.”

Currently, Alexander is working with CAFNR administrators to create a more immersive version of these outings geared toward students who are highly interested in pursuing a career in the plant sciences.

“We really appreciate his interests in assisting the development of the students,” says Jim English, interim director of the Division of Plant Sciences.  “We’d like to see if there is a way we can make that work.”

If there’s a common theme from all of the financial support and time that the Alexanders have given CAFNR over the years, it is derived from practical applications to help students find well-paying jobs in an ever-changing economy.

“He exemplifies the very best in what an alum can do,” says Stephanie Chipman, director of career services at CAFNR. “Certainly I appreciate his generous financial contributions, but in addition, he’s one of the alums who really cares and gives his time and talent as well.”

This past fall semester, with the Alexanders’ support, Chipman launched a peer-learning assistance program for freshmen and sophomores. Collaborating with professors teaching in animal science, agricultural economics, biochemistry and hospitality management, peer learning assistants provided group and one-on-one advisement to encourage their peers to begin their career planning early in their Mizzou career. Assignments in the courses ranged from informational interview to résumé reviews to mock interviews. A few students even landed internships as a result of participating in the program.

“Our purpose is to help students start that process of career ideation very early. We want to generate multiple career pathways for them and then encourage deliberate planning toward career success.”
―Stephanie Chipman

“Our purpose is to help students start that process of career ideation very early,” Chipman says. “We want to generate multiple career pathways for them and then encourage deliberate planning toward career success.”

When thinking back on his time as a student, Dudley recalls the professors and administrators who helped shape his experiences. Elmer Kiehl, who served as the dean of the college from 1960 to 1979, is one name who comes to mind.

Although the college has undergone a series of changes over the past decades, the one constant has been the connection to the students and alumni, Dudley says.

“I think what CAFNR does is they stay close to their students,” he says. “The administration and the professors, they know their students and they stay with them and try to help them probably better than most schools around.”